Crankshafting from the ground up

V8 has 2 compilers, full-codegen and Crankshaft.

Full-codegen traverses the AST and simply generates stack machine code for each node.

FullCodeGenerator is defined in full-codegen.h and the implementations are platform-specific.

You can examine the optimization phases with C1Visualizer.

The basic blocks for the example:

Next we list the instructions for the basic blocks. v0, v1, t0, t1, s0, s1, etc. are variables used in the SSA representation.

Detail: The meaning of the letters is as follows: s = known to be SMI (small integer), t = tagged representation (can either be a pointer or SMI), v = no representation chosen.

The BlockEntry and Goto instructions are related to the basic block graph structure.

The “Simulate” instructions are for keeping track of what the stack machine state would be, in case we need to bail out and start using unoptimized code. They don’t generate any actual machine instructions.

In the Lithium phase, Crankshaft generates a translation which allow us to map from optimized stack frames to unoptimized ones. The translation is generated based on the HSimulate instructions (see LCodeGen::WriteTranslation in lithium-codegen-ia32.cc). When we detect that we need to bail out from optimized code (in run time), we construct the stack machine state based on the translation, generate the stack machine code, and continue executing it from the right point.

The coloured parts correspond to the following JavaScript statements:

(Nothing interesting in this block.)

(Nothing interesting in this block either.)

Both x - 5 and 23 are assigned to the variable x, but since this is SSA, we cannot have multiple assignments to the same temporary variable. So we’ll use two different temporary variables, and they’ll be merged later.

This is called Phi operator.

The Phi operator says that v35, v27 and s30 are really the same thing. For example, if we decide to store v35 in a register, we might use the same register for v27 and s30, too, so there is really one physical location for them. Or if it’s not possible to use the same register (e.g., if the basic blocks for computing v27 and s30 need it for something else), the data from v27 or s30 will be moved to it at this point.

The instructions correspond to HInstructions, e.g., the subtraction is represented by HSub. Note that every instruction is also a value (HInstruction subclasses HValue).

The data flow graph describes how the data flows between the temporary variables: 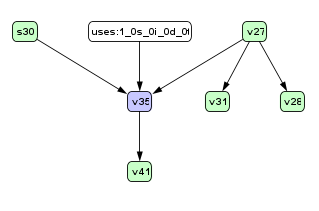 A partial view of the HInstruction class structure:

Full-codegen uses IC stubs for accessing member variables efficiently. When crankshafting is done (remember that this happens after V8 has detected that the function is hot), Crankshaft retrieves type information from IC stubs and builds the code based on type assumptions. If these assumptions fail when running crankshafted code, we bail out to the non-optimized version.

example2.js: Demonstrating bailing out and deoptimizing if a type assumption is violated.

Check that the type assumption for the parameter o is met, and if so, use the efficient LoadNamedField instruction for accessing the property x. 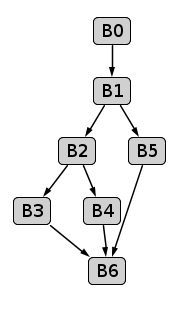 Branching based on the type of the object.

The type was something unexpected, so bail out and deoptimize the function.

These instructions load the data from the two known types of objects.

If the access site is megamorphic instead of polymorphic (i.e., more than 4 types of objects have been seen), we create a CFG where we check for 4 different possible types, and if the type is none of them, we do a generic load (LoadNamedGeneric). 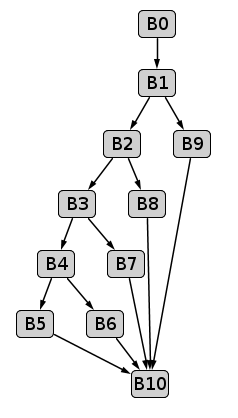 B1 to B4 check for a specific type of an object like in the previous example. B5 is the generic access:

In addition to the instructions mentioned here, LoadKeyed and LoadKeyedGeneric are used for representing indexed access, e.g., “arr[n]”, where the index cannot be resolved statically

DOM objects are managed by Blink, so for accessing data from them, V8 needs to call Blink. When JavaScript calls functions on DOM objects or accesses their properties, C++ callbacks inside the V8/Blink bindings are called.

Let’s switch from d8 to content_shell for a moment:

Running with content_shell (at the root of a Blink checkout):

LoadNamedGeneric uses the IC stub which then calls the corresponding callback in Blink bindings (firstChildAttributeGetterForMainWorld in the generated V8Node.cpp).

LoadNamedGeneric is also used when we have a monomorphic access site, and try to access a property which doesn’t exist for the known type.

When the JavaScript contains a loop, the CFG is not a DAG but contains a cycle. Moreover, the decision on whether to continue the loop is affected by variables computed inside the loop.

This is the constant 1 used later in the loop body.

This is the constant 0 i is initialized with.

Merging data back from the bottom of the loop. s10 is the initial value (0) and v33 is the value after incrementing i.

The data flow graph shows the circular relationship between v14 and v33. 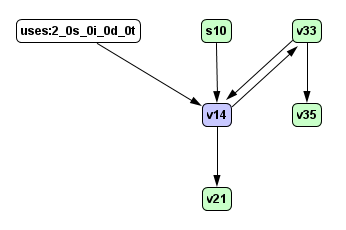 Deciding whether to crankshaft

The unit for crankshafting is one function (plus whatever other functions are inlined in it).

Some instructions, e.g., try-catch are not crankshaftable. Thus, some nodes in the AST are marked as non-optimizable (see DONT_OPTIMIZE_NODE in ast.cc). If a function contains some of these non-optimizable nodes, the corresponding SharedFunctionInfo::set_dont_optimize() is set to true.

Crankshaft can also bail out while processing the Hydrogen graph, if it decides it cannot optimize (see HOptimizedGraphBuilder::Bailout in hydrogen.cc).