an in-depth look into the world of aggregated review scores

How useful is a recommendation? A recommendation is only as useful as the authority under which it is issued. A friend, colleague or family member can provide meaningful, relevant, and accurate recommendations given that they have adequate knowledge within the domain of the recommended item. However, these recommenders can be limited to a small breadth of items and an individual might seek to explore other recommendations provided by professionals.

Professional recommenders, or critics, often have some kind of speciality within a domain which cites them an authority on the subject. At first, it may seem that a critic can provide better recommendations than a friend but a critic lacks one fundamental piece of information: to whom the item is being recommended. It is the responsibility of the individual to find critics that match their own preferences. In fact, an individual might create a pool of trusted critics and use a combination of ratings to make a decision on a product.

Video games are hot candidates for critic reviews. With tens of thousands of games being released yearly[1], many games must rely on advertising or recommendations. As a consumer it is difficult to wade through games that might be worth the investment of time and money. The importance of review scores goes even beyond the consumer. Many smaller games, which do not receive the same attention or budget as “blockbuster” games, may live or die based solely on review scores. Entire companies may even be at risk of crumbling if their reviews scores are inadequate. Take for example developing studio Obsidian Entertainment, who missed a crucial bonus from their publisher Bethesda Softworks, LLC by missing a targeted aggregated-review score by one point[2].

Aggregated review scores are important to the video game industry. Though many can disagree, aggregated review scores are used as a quick measure to determine the quality of a game. They are commonly obtained through a leading review website called Metacritic, which is a CBS Interactive subsidiary. Metacritic’s dominance in the field is evident from simple searches which yield no obvious competitors. While Metacritic is operated like a business, using advertisements and promoting content, it also lacks transparency. Metacritic does not clearly state how a critic can apply to become aggregated, nor does it  reveal how it might weigh certain critic’s reviews:

“Can you tell me how each of the different critics are weighted in your formula?

Aggregamer at its core is essentially a wrapper for Metacritic. It uses all of the critic scores that Metacritic has collected for a game and weighs them equally. Aggregamer also finds “critical” critics, also referred to as partial prejudice critic partitioning, and provides the ability to recalculate the aggregated review score. This article will discuss how Aggregamer attained its data from Metacritic, how it selects which scores to consider, its use of frequency-based score prediction, and its item-to-item recommendation system.

Anecdotal scale. The following (figure 2.1) is an anecdotal description of the rating tiers. Notice as the scores increase, the range in which they represent becomes more precise. This is due to the fact that as the score moves away from the mean, the set of games that fall within those scores becomes smaller and is more easily definable. Also to note, there is currently no game with a higher aggregated score than 97.

Console. A console is the piece of hardware that a game operates on, e.g. Xbox One, Playstation 4, Nintendo Wii U. Computers are generally distinguished from consoles, but can also play games.

Crawler. A tool used to systematically discovered and parse URLs on a given domain or many domains.

Metacritic. A website which aggregates review scores for many items, such as: movies, TV, music, and video games. It is the leading website in its area and is widely used as a first resort for seeking reliable review scores within its vast collection of items in each of its reviewed sections.

RF-Rec. A rating prediction algorithm based on rating frequencies.

Wrapper. A wrapper can be a general term for something the augments existing functionality with something new.

Amazon’s Item-to-Item collaborative filtering algorithm was originally proposed in 2003 as a scalable way to quickly make recommendations while still using a large dataset. This method creates a product similarity table offline and then uses it in conjunction with the user’s purchased items.

RF-Rec is an algorithm that can be used to predict the scores of items that have not been rated. The user’s most commonly used score (mode) is weighed against the mode score of the item and a predicted score is achieved.

Inter-rater-reliability is a measurement to determine if raters agree with one another. It is not directly used within this project but there are some considerations to filter out critics who are rating too high or too low and may skew a good aggregated rating.

4.1 Obtaining the data. Metacritic was parsed using a ruby library called Nokogiri.This library allows an XML document to be navigated using XPaths. First, a list of consoles was obtained  through a  drop down menu[3]. Each console has an alphabetical list (letter index) of games with each list containing 100 items and a next page link if the list has more than 100 items.

Secondly, a rudimentary crawler was created to navigate all of the letter index pages as well as any next page links that may have been present. Each crawler was statically delayed by three seconds. 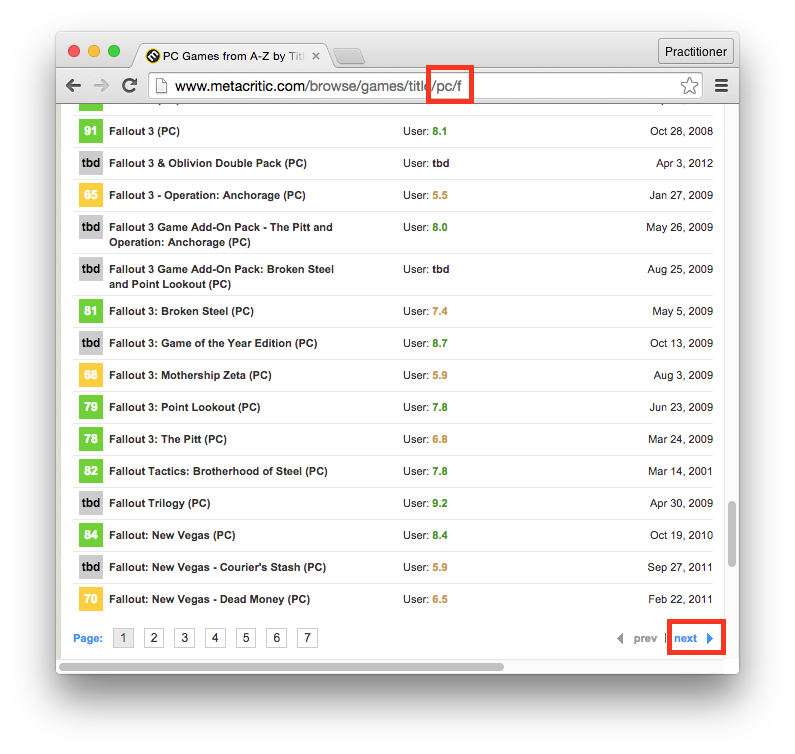 In the previous step, each game was stored in a database, which stored the name of game and a URL where details about the game can be viewed. Using this URL along with appending the path /critic-reviews[4], all of the game review scores and critics who reviewed them were displayed. Once this page was obtained, a series of XPaths were used to extract the relevant data. Each page-request to obtain the game’s scores was statically delayed by two seconds[5].

Figure 4.1.2: An example of an XPath that was used to obtain the reviewer’s score

4.2 Calculating the averages. Once all of the review scores had been obtained, a few simple techniques were used to determine the mean review score. The scale on which the critic rated was determinable by looking at the distinct rating scores. For example, if a critic’s distinct scoring-set contained five or six elements (i.e. {0,1,2,3,4,5}), then the critic was considered to rate on a 5-point. Likewise if the scoring set contained 10 or 11 elements, then the critic was considered to rate on a 10-point scale. It is necessary to check a range between five and six, as well as 10 and 11 because some critics will not give the maximum or minimum value. For example, prolific critic GiantBomb does not rate any game as a zero therefore their distinct scoring set only contains five elements, whereas a critic who does rate with zeros will have six elements. Critics that rate on a 10-point-decimal scale were assumed to be the complement of the 5-point and 10-point reviewers.

4.3 Predicting scores using RF-rec. One possible flaw that could occur with the 10-point-decimal scale, is that the frequencies will be quite spread out and yield inaccurate results when compared to other scales. This implementation of RF-Rec rounds to the nearest half decimal, i.e. a score of 73 will get rounded to 75 and a score of 72 will get rounded to 70, and then proceeds to performs the algorithm. With less discrete scores for frequencies, the hope is to predict scores for games that might have fewer reviews, or are reviewed by critics that use different scales.

4.4 Recommending games using Item-to-Item collaborative filtering. Using the review scores, item-to-item collaborative filtering was implemented to recommend new games. The algorithm compares two items based on common reviews. Using both sets of reviews the cosine similarity is computed between the two items. The pair with the highest similarity produces a recommendation. In this specific implementation, a required minimum of overlapping reviews was set to 20, i.e. if the two items did not share at least 20 critics they were considered irrelevant.

5.1 Average review score. Through manual analysis of the review scores for critics who rated on the 5-point scale, it was revealed that Metacritic actually weighs scores differently for some critics. For instance, if critic A rates a game with a score of one, Metacritic might translate that score to a 20, whereas for critic B it might be translated to 40. For this reason all reviewers that were found to rate using the 5-point scale were removed from the average.

However, since there were only six relevant 5-point-critics, the previous average of 74 was not meaningfully affected. 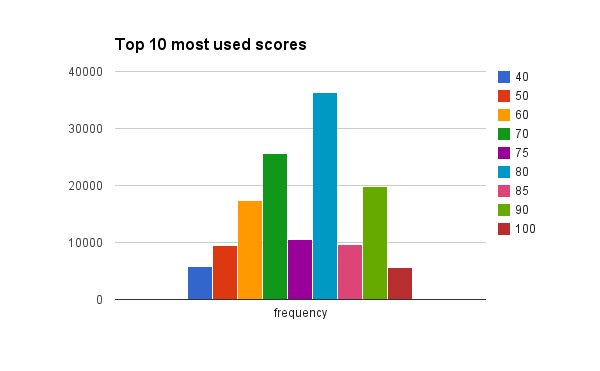 Figure 5.1.1: A bar graph showing the frequency of the top ten most used review scores

This subset of reviewers was further reduced by only considering reviewers who had a mean review score that was less than or equal to the overall mean of 74, this subset is called partial prejudice critic partitioning. Recalculating the aggregated review score for a sample of popular games yielded very similar scores. Only a handful of games show significant score changes (see figure 5.1.2).

5.2 Predicting scores using RF-Rec. Frequency based score prediction turned out well. Using  the same sample of games that were present in figure 5.1.2, and taking relevant-reviewer IGN, a comparison is made between IGN’s original score and their predicted score, attained via RF-Rec. As a game approaches the mean review score of 70 RF-Rec has a very high accuracy, thus the list in figure 5.2.1 showcases games that were reviewed above the average to see how it deals with challenging predictions.

While these two sample recommendations did produce popular sequels to the original game, it also produced titles that were hard to imagine as accurate recommendations based on their differences in genre and style This does not however eliminate the possibility that the results would be favourable to the user.

Similarities can be considered static; one of the benefits of critic only reviews is that there eventually will come a time where no new reviews will be accepted. Thus the similarities can be calculated offline, and then quickly looked up when requested. This method offers low overhead for displaying a recommendation while still leveraging the entire system.

The world of game reviews can often be misleading as well as intimidating. It is difficult to find reliable and trustworthy reviews when seeking information for a potential new purchase. Websites such as Metacritic offer an extensive database of information on a large variety of games, however, its lack of transparency may raise eyebrows.

The analysis on mean review scores and relevant critics hopes to provide a more clear and true view of aggregated scores, potentially even eliminating critics who are solely motivated by monetary gains or who are endorsed by a biased party.

The possibilities for the expansion of Aggregamer are very extensive, such as comparing more games using partial prejudice critic partitioning, to determine if there are prevalent critics who consistently add a skew to the aggregated score. It would also be beneficial to investigate scoping recommendations to a specific genre or console. A way to evaluate the quality of a recommendation, perhaps through a third party source, would also be beneficial.

Aggregamer hopes to one day open its doors to the public and allow for non-critic users to review games and receive meaningful recommendations.

[3] A common form of navigation which lists a topic and then expands to more specific terms.

[4] Example of a real URL: `http://www.metacritic.com/game/pc/fallout-new-vegas/critic-reviews`

[5] The entire process took around 18 hours to complete.