@michela123, most of these methods were either learned or improved upon from observing the way she tests mechanics.

Although this guide and its contents are aimed towards helping players understand how to test mechanics in Neverwinter, keep in mind that you could apply similar thought processes to testing mechanics in any game, or apply them to things outside of gaming. What this guide is seeking to teach is a specific thought process, which is ultimately not an easily endeavour. I hope that throughout this document, I manage to achieve this.

The idea behind testing:

Step 1: Identify the scope of the test.

Step 2: Make a list of everything that has the property that you are testing.

Step 3: Identify the method for testing.

If you intend to publish your results:

Although I make frequent use of this tool I by no means consider myself an expert and there is definitely a lot more that can be done with the tool then what I use it for. An explanation on how to install ACT is provided in the link above and thus is not provided here. Explanations will only be given for basic functionality.

When you first run ACT, you will be confronted with a UI that looks something like this: (The numbering is my own) 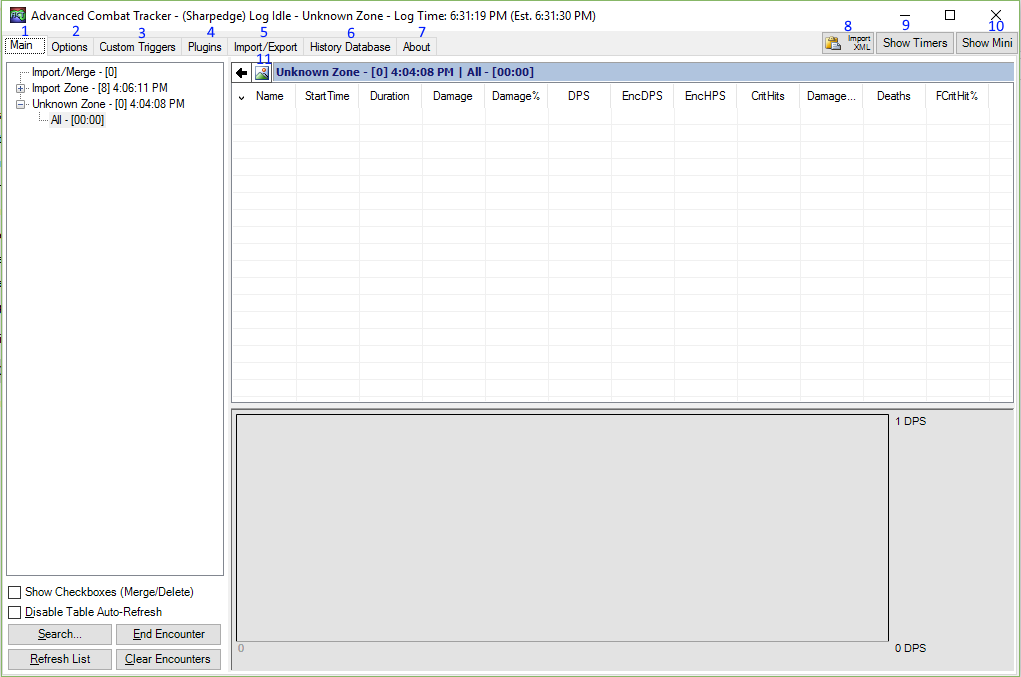 So, let us select the Import Tab: 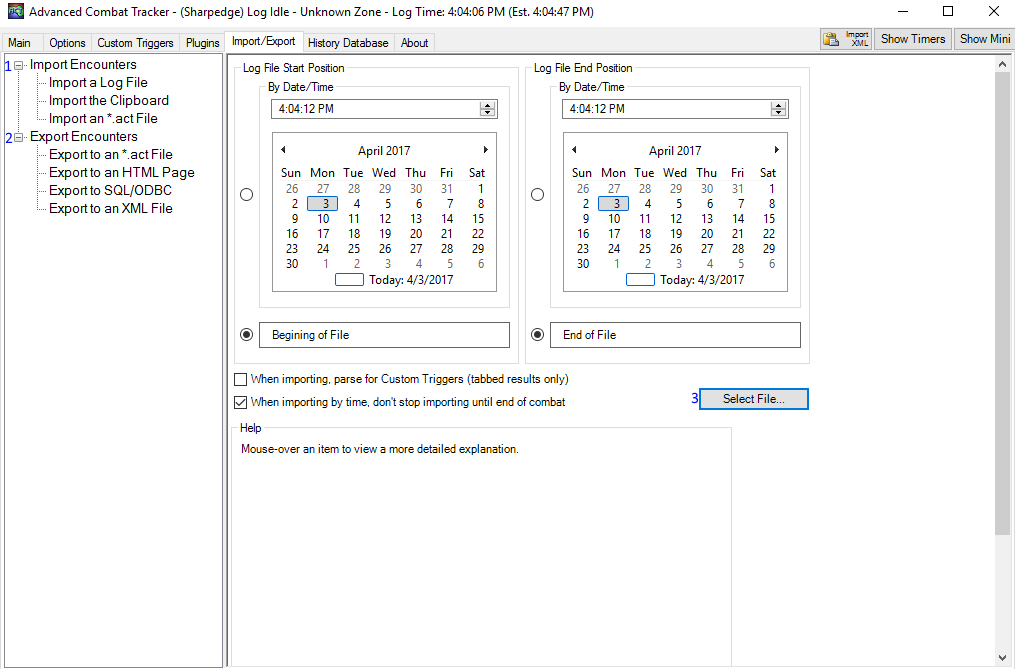 Combat logs for reference is a folder I created for keeping track of whatever tests I have done, as outlined in tip number 3 above.

So, after importing a combat log, let us go back to the main tab and expand the line on the right named, “Import Zone.” 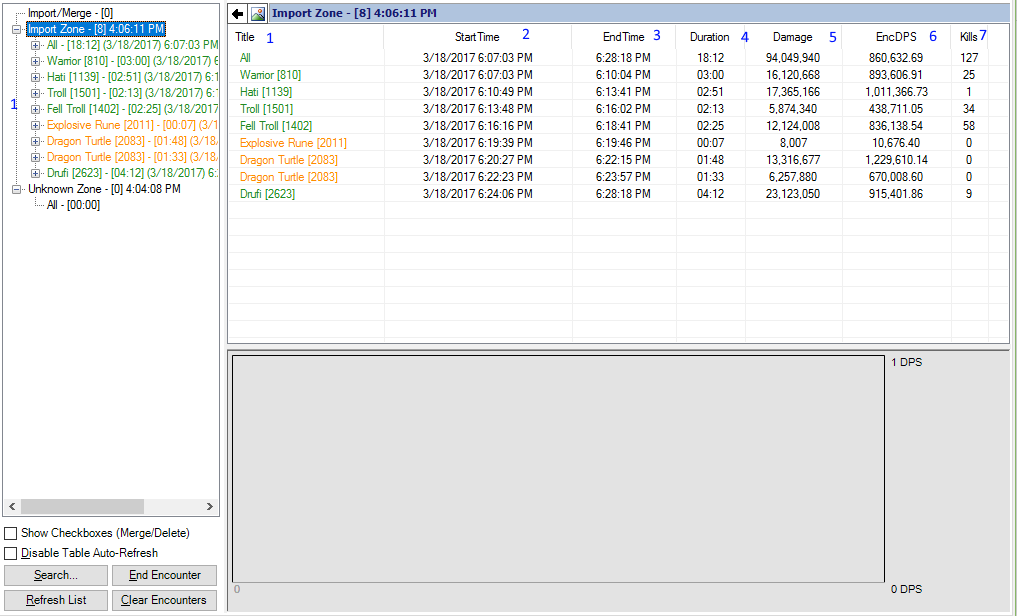 This tab is not particularly useful, I just included this image in the event that someone is curious. Now, in this case I will select the, “all” tab (either expand it on the left or double click on it on the main table) and take a look there: 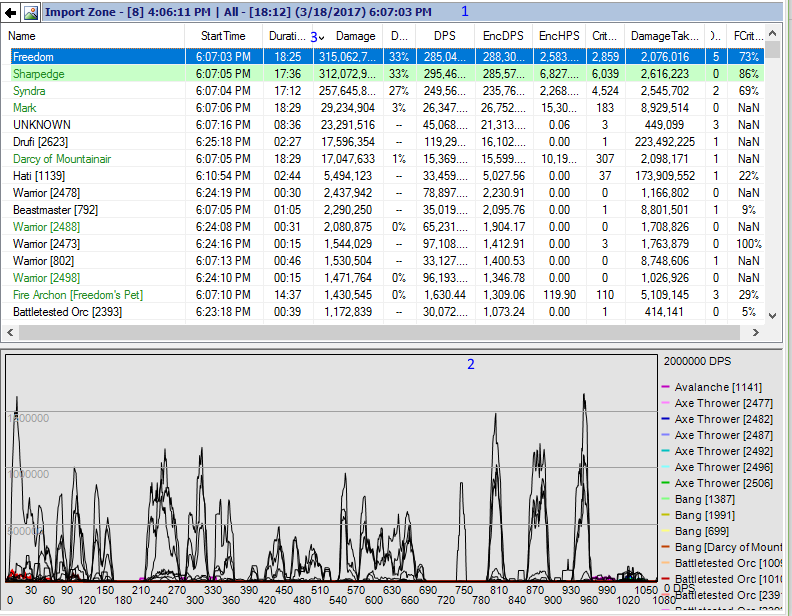 I will not explain the different tabs at the top, as they were either covered in the previous section or will be covered in the next section. Now I will select 1 of the combatants, in this case Freedom and take a look at the next UI: 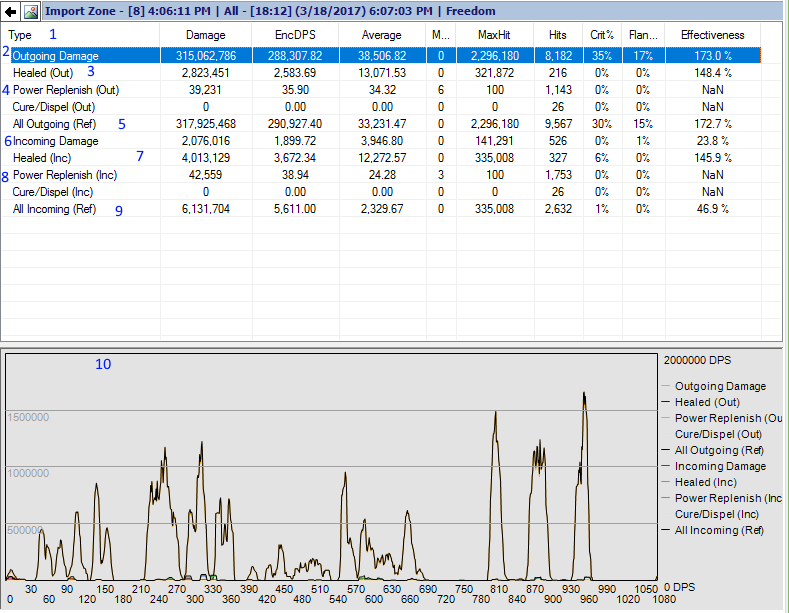 Next, let us take a look at what happens when you select 1 of these, in this case I will select outgoing damage: 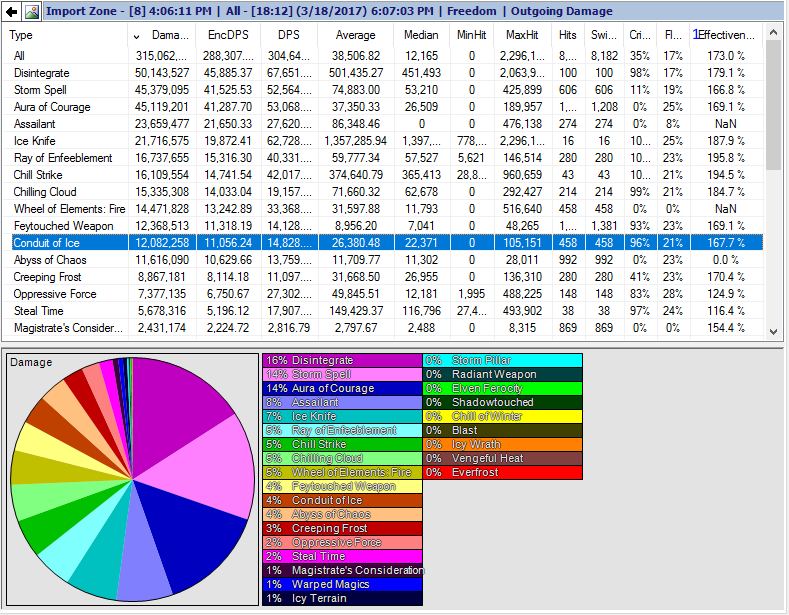 I won’t explain any of the other concepts, like, Average, Median, minhit, etc, since they are either self explanatory (in the name) or really basic concepts that you can find easily on google. If you double click on any of the individual abilities listed here, it will list all hits dealt by that ability. In this case here is disintegrate: 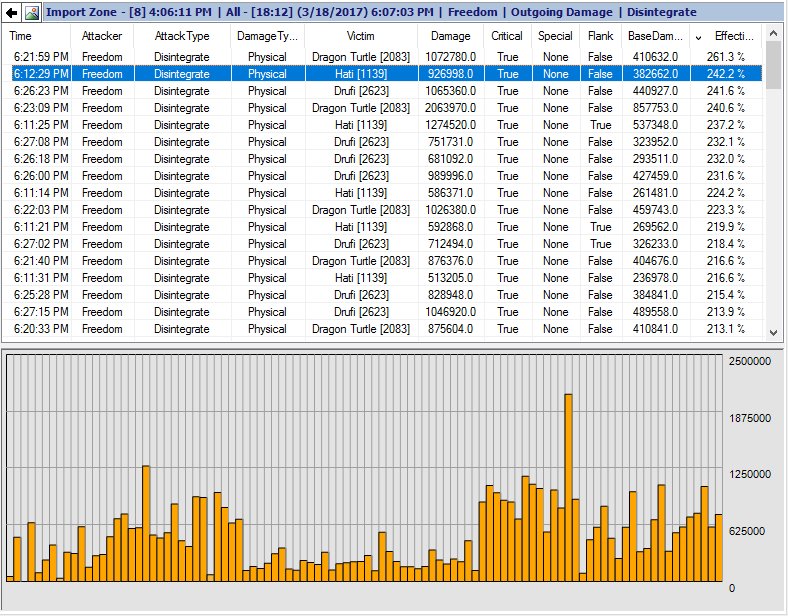 If you right click on any of these hits, the following piece of UI will come up: 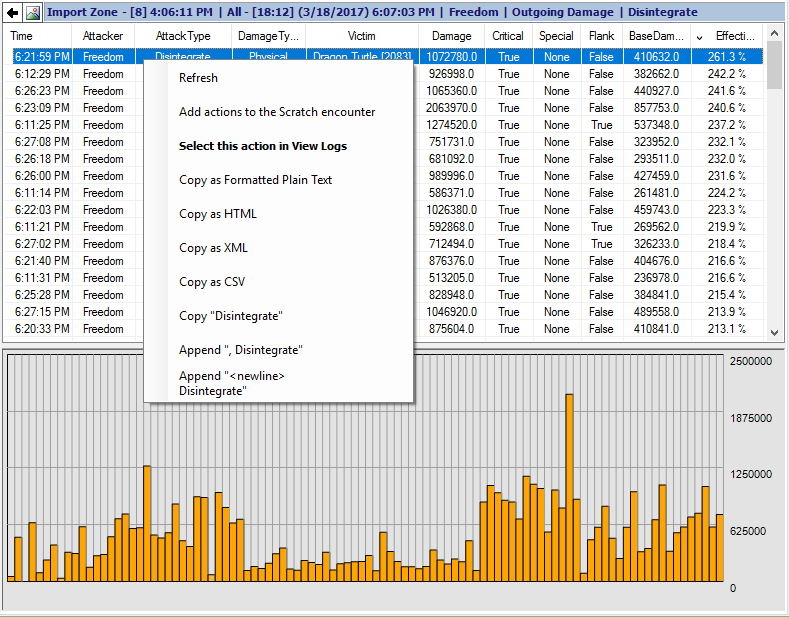 Select Action in View logs shows you that individual hit in the logs. The advantage of this is unlike all other selection methods in ACT, this shows information about that particular hit, up to 4 decimal places. As follows (Please note all box colours overlaying this selection were added by me):

Selecting attacks in this manner is useful for any tests that require very precise or exact numbers.

Although not something you will find yourself using very often when testing something, the Custom Spell Triggers are great in actual gameplay for monitoring which buffs are up. First of all, in order to make use of Custom Triggers, you need to be live parsing. To do this go to options, Miscellaneous:

Now select the combat log you wish to parse. In order for this to work, you will also need to scroll down the options to Neverwinter - General and add player detection, for example: 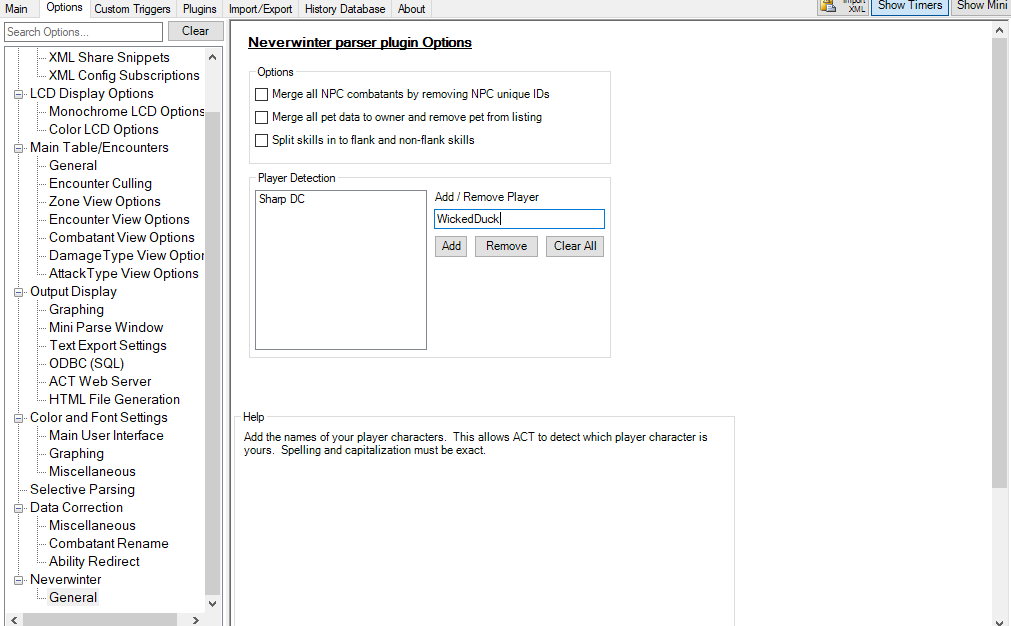 These will be the players that ACT will actively track in combat. Now, switch to the custom trigger tab, you should see the following: 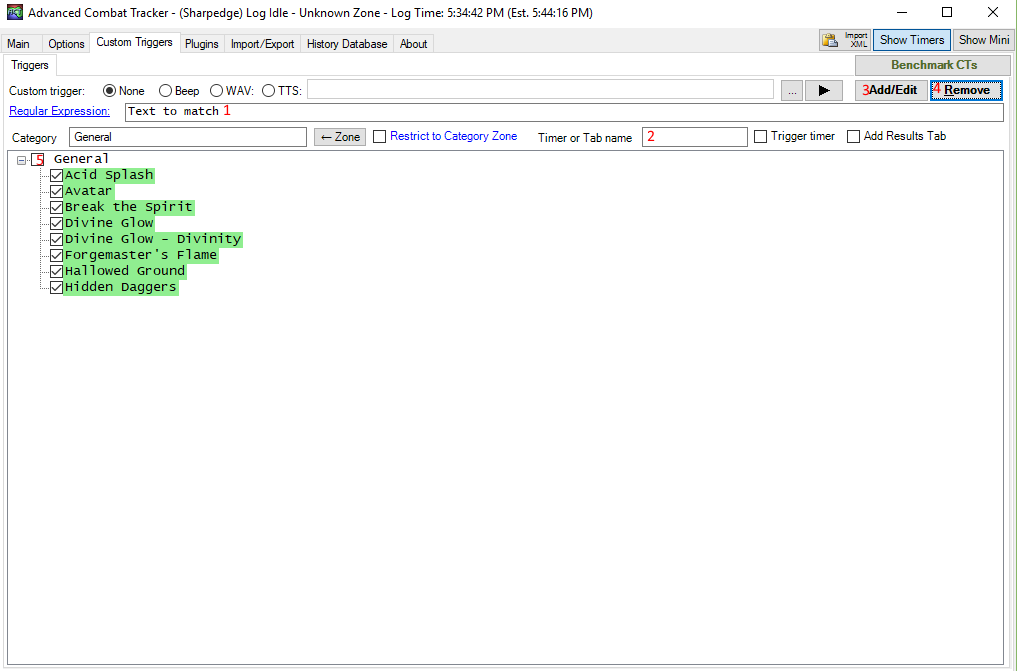 For the sake of demonstration, let us add a trigger called, “Chaotic Fury” and give it a Tab name of CMF:

Now, click on the button “Show Timers” and then right click on the menu that appears, the following menu should appear: 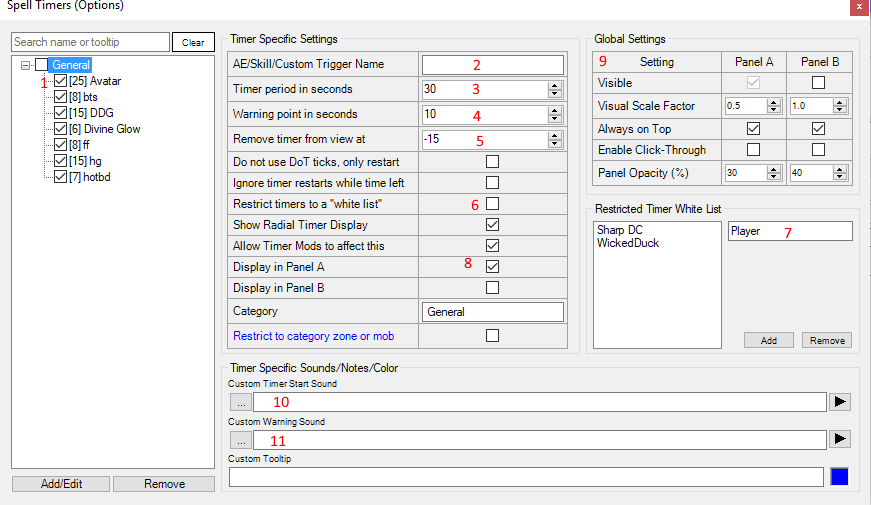 Spell Timers can be very useful in coordinated groups for ensuring all buffs are up before landing big burst hits. They can also be useful for optimizing your rotation, as you can build your rotation around keeping buffs up at all times.

The idea behind testing:

With that (admittedly basic) explanation of how ACT works, we can now move on to actually looking at how to test something in an accurate manner. When testing mechanics,

Step 1: Identify the scope of the test.

The first thing you want to do is determine how large (or small) the test you are trying to do is. For example, are you testing something small, like whether or not the yeti active bonus works, or are you testing something large, like how every debuff in the game works. It may seem like a silly thing to do, but depending on how large a test is, you may want to approach it in a different manner. For small scale tests, you can skip most of this except step 1, 3, 4 and 6, for large scale tests, you will want to go through all of it.

In the test I did for the ability coefficients for skills, the scope was fairly obviously large, as I was checking a mechanic across every class.

Step 2: Make a list of everything that has the property that you are testing.

Before you actually start testing a mechanic, you will want to list everything that has that mechanic. For example, if you are testing damage reduction debuffs, the first thing you would want to do is go through the list of all abilities for every class and write down every ability that describes itself as having some debuff. Once you have done this, you then move on to items. The wiki is your best friend here, for example, this page on artifacts, or this page on companions.

Once you have a list, you will firstly have a better idea of what you have got yourself into and secondly, you will be able to organize best how you plan to work through it. For large tests I recommend breaking the test down into smaller ones, where you test maybe test 1 class on 1 day and then another on another day, it simply makes the test easier to manage.

For testing the ability coefficients of skills, I made this list, keep in mind this is the final document so it looks a lot better than it did while I was testing stuff since I took some time to format it.

Step 3: Identify the method for testing.

The first thing you need to do when you set out to test something is to come up with a method for the test. The method needs to fulfill the following criteria:

When you come up with your method, you should ask yourself, “How does this mechanic interact with stuff in a way that I can check it scientifically.”

Here are some examples of methods for testing some mechanics:

Here is a list of tools I recommend taking advantage of when testing:

To illustrate this method, let us go through the process with a test I have already completed, which was the test for the ability coefficients for skills. The method I used is outlined here in the, “how to test this,” section.

Begin applying the method you came up with in step 1 to everything you are testing. Here is some general advice for recording results:

Anything that does work the way it is intended, can now be ignored. I like to mark it in green in my spreadsheets when i am still in the testing process, to indicate that it is ok, but any colour (or no colour) will do. Now that you have a list of everything that does NOT work the way you expected it to, you can now try and figure out how it actually works. There is no best way to do this, the way I do it is I play a guessing game, for example guessing if it add or multiplies with different things, until my guessed behavior matches the actual behavior.

Now that you have a list of how you expect everything to work, check it, at the very least 1 time, ideally 2 or 3 times. Everyone makes mistakes and the more complicated a test is, the more mistakes you are likely to make. By checking results, you can find these errors and then try and eliminate them.

Report everything that doesn’t behave the way it is intended to behave. Try to be as concise as possible and make sure to list the method you used to test it, as a method that could be used to replicate the results. List the actual behavior compared to the behavior described on the tooltip.

This may not seem important, but making sure your test is presented in an easy to read, sensible manner is necessary, even if you are the only one who ever sees it. At the very least, it needs to be presented in a manner that makes sense to you. If your results are a pain to read, then it is easy to make mistakes if you ever need to retest due to changes or other reasons.

If you intend to publish your results:

Firstly, thanks, we all appreciate the work you have put into testing whatever it is you have tested, however, here are a few guidelines and requests from me: