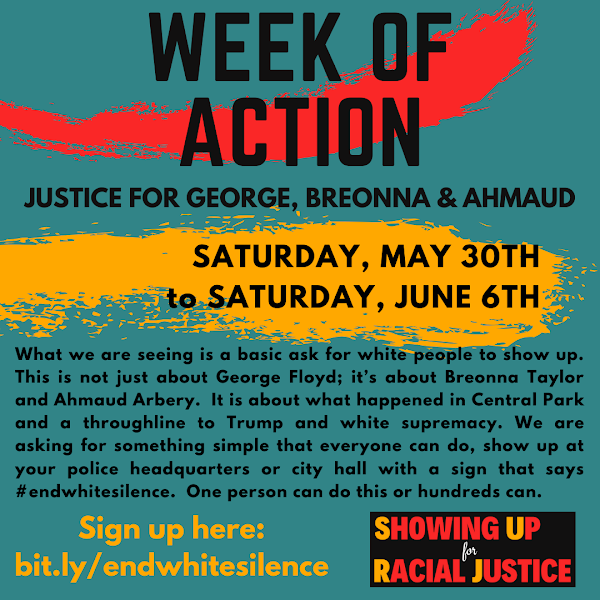 In this moment, white silence is being used to justify the unjustifiable, and we need as many people in action as possible This is about George Floyd, and it’s alsoabout Breonna Taylor and Ahmaud Arbery, and the centuries of violence against Black people and communities of color by the police.  It is about what happened in Central Park and a throughline to Trump and white supremacy.  This is an opportunity for us to change the conversation.  We are asking for something simple that everyone can do, show up at your police headquarters or city hall with a sign that says #endwhitesilence.  One person can do this or hundreds can.

What is this about?  It is about police impunity, and deeper seeded systems of white supremacy which include: COVID deaths, mass incarceration, deportations, theft of indigenous lands and other systemic oppression in POC communities.  It is about showing that struggling white folks have more in common with POC movements for change, than with those at the top.  Our work is to break white silence, expose the lie, undermine the hold on white folks.

White silence creates the space in which the killing of Black and Brown and Indigenous people is acceptable.  We know that what happened to George Floyd and Breonna Taylor is what has happened to thousands of other black folks over the last few years; extrajudicial murders by the police.  This is not about the Minneapolis Police Department or the Louisville Police Department, it is about the institution of policing in general and those who wear the badge. It is about the relationship of policing to maintaining the profits over people economic system--keeping white folks from joining people of color for a better world for all of us.

1)      Our job is to use this moment to bring more white folks into the movement for racial justice in ways that are accessible to them, welcomes them, and engages them now and for the longer haul.

2)      We are being called by communities of color, and our own stake in this moment, to “do something”concrete and that is about action.  Study groups, meetings, a ‘good heart’ and tweets are deeply insufficient for the time we are in.

3)      If you are in an accountability relationship with an organization led by folks of color who are showing up in public like in Memphis or Los Angeles, support that leadership and follow the requests for support Whether this is the case or not, we encourage you to consider an #EndWhiteSilence event to bring more white folks into visible action.

The proposed action is simple.  Show up at your local police station with a sign that says #EndWhiteSilence.

While You Are There:

A note on safety:  Before we get into specific scenarios there is one guiding principle.  Be Safe, whatever that means to you.  We are in a global pandemic with white supremacist activity, with often tacit support from the police on the rise.  There are no easy answers here, but we are trying to be present and visible.  If there are activities that feel unsafe, you can leave.  And if you feel inclined to use your privilege and white body to be present for police attacking youth of color, do that as well. The decision and risk are yours.

What if there are too many people?  What a great problem to have!  There are a few options here, you can use caution tape or sidewalk chalk to create social distance places for people to stand or sit.  You can set up an on-line form so that folks can sign up for shifts and make it a 24/7 vigil.  Or you can suggest people go to other targets as well.  Google the police foundation board and look for the local law firms and corporations that sponsor the police and send some participants to those places.  Or, you can go to City Hall and places that oversee the police.

What if white supermacists/militias show up?  Yeah, that can be scary, no doubt about it.  You have to make the judgement about when something is unsafe and you should leave.  There are lots of other tools, often the right-wing will show up in cars, so you can move people to the sidewalk.  For those people who do leave, accompany them back to their cars.

What if police start harassing you?  Again you have to decide your level of safety.  Generally being a predominantly white group changes the way the police will interact with you.  A few things you can choose to do include:

Our goal in doing these public actions is to get attention, and media.  Here are some tips:

Message:  If you are talking with TV and Radio, always answer the question you wish they had asked, not the one they ask.  So think about a 30 second blurb and don’t be shy about repeating it.  Speak from the heart. Talk about systems and structures.  George Floyd’s and Breonna Taylor’s murders opened the door so more people could understand how the police function, but it is not merely about justice for George Floyd and Breonna Taylor.  Here are some sample things you could say but please speak to your own experience.

“As a white person, I knew I needed to come out today and bear witness at the Police Station here in xxx.  I understand that George Floyd’s and Breonna Taylor’s murders were not isolated incidents, but it is about police violence inflicted on black and brown bodies everyday.  As a mother, I cannot imagine what it must be like for an African American mother struggle to keep her family safe in a pandemic, while also worrying about murder and abuse from the police.   Look at who is mostly dying from Covid, it is people of color as well. I needed to get off of watching the news, and be part of making a change, and I am encouraging my friends and neighbors to do the same.”

Getting Press: Below is a sample press advisory you can send out to media outlets.  Remember reporters are people too, so also call them, email them directly, and direct message them on twitter.  If you have a larger event, designate someone to be media liaison.  This doesn’t mean they need to be the spokesperson, it just means they need to talk to press and bring them to the correct folks who can speak.

Anytown, MO— Tomorrow, May 30th at 1:00 PM EDT, Demonstrators bringing signs and practicing social distancing will be at the Police Headquarters at 150 Main Street in downtown anytown.  They are part of Showing up for Racial Justice (SURJ), an organization dedicated to organizing white folks to show up and fight the root causes of racism.  The demonstration is to show that George Floyd’s and Breonna Taylor’s murderers were not just rogue cops, but they represent underlying conditions of racist policing that manifest here in Anytown as well.

WHO:  Members and supporters of Showing Up for Racial Justice, practicing social distancing

WHAT: Demonstration to End White Silence on racist policing practices and the systems that support hat.

SURJ Leader Mother Jones said, “As a white person, I knew I needed to come out today and bear witness at the Police Station here in Anytown.  I understand that George Floyd’s and Breonna Taylor’s murders were not an isolated incident, but they represent the police violence inflicted on Black and Brown bodies everyday.  As a mother, I cannot imagine what it must be like for an African American mother struggle to keep her family safe in a pandemic, while also worrying about murder and abuse from the police. I needed to get off my social media feed, and show up in person and bear witness.”