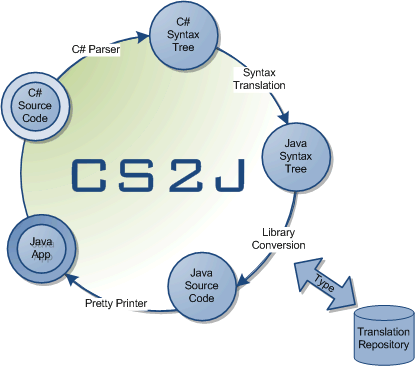 CS2J is a Windows executable that can be run from the command line. (There is also a GUI launcher which is not yet described in this document, ask for details).

To run the translator there are three required arguments:

There are many, many more options too,  cs2j --help describes the most useful, section CS2J Parameters describes them all.

Assuming you are in the root directory of the unpacked archive then a minimal command line would be:

This will translate all cs files below <cs application root> and place the resultant java files below <java project source>. (The directory structure of the java files will not match the directory structure of the C# files, instead it will match the java namespaces). To translate calls to the .NET libraries the translator will use the translation templates found below NetFramework (note, that argument is the name of a directory).

A slightly more complicated command line would be:

The translator will place the resultant java files below <java project source>. The translator will use the translation templates found below the NetFramework sub-directory to translate calls to the .NET libraries. It will write diagnostics to the terminal, increasing amounts of diagnostics are output as the debug parameter is increased from 0 to 10.

We now briefly discuss some of the other options to the translator.

The -show-XXXX options will show the internal data structure during processing. There are options to display the parse tree at each stage: CSharp, Java Syntax, and Java.

The -ex-XXX options allow you to exclude files and whole sub-trees (by giving the root of the excluded directory) from consideration.  You can block parts of the XML translation area; parts of the application when generating the translation repository; and part of the source to be translated. For these options you can specify multiple exclusion paths separated by semi-colons.

The -cheatdir option points to a directory hierarchy that matches the target java output directory structure.  You can put two types of file here:

You should consider carefully before using the cheats facility.  We do not use it for our main translated product. For code that we can't translate we move it into a separate (untranslated) namespace (e.g. Application.Utils) and write separate versions for .NET and Java.

The provided .NET framework translations are in the NetFramework\System sub-folder.  This is structured in the same way as the .NET framework namespace, i.e., the translation for "System.Collections.ArrayList" is the file System\Collections\ArrayList.xml. (This is just a convention, the location and name of a translation file is irrelevant).

These files are XML, the translator is a bit finicky about their structure and if it sees something it doesn't recognise it often fails silently.

The format of the translation file deserves another document, unfortunately it isn't written (yet). Look at the provided translations under NetFramework for inspiration and, as always, ask us for help.