Appendix A – Other Resources

This manual will define  high-level launch procedures.  For specific duties and responsibilities, please refer to the checklists and responsibility documentation provided.  Information Sources will be defined in Appendix A.

During staging, epoch must be initialized and locked.  Epoch 0 (Zero) will be noted and documented.  All other flight variables must be confirmed.  These variables include, but are not limited to:

Finally, HF telemetry must be confirmed.  First verification is generated by listening to telemetry transmitted with an HF Handheld Radio.

During the remainder of transit, the payload should remain powered with ground power.

Spaceport Indiana will prepare for the arrival of the White Star team in accordance to the instructions provided in this document.

The White Star team will provide Spaceport with the following items, to be set up prior to launch

It is expected that all equipment shall be setup as specified in section 3.1.3 by the time the White Star team arrives at the launch site.

Spaceport will receive further notice 12 hours prior to launch of  impending launch status.

Three hours prior to launch, a representative of Spaceport Indiana will be expected to provide range weather conditions.  Further launch notification will be delivered at this time.

Site setup crew should arrive at the launch site 2 hours prior to launch.  Supplies shall be configured according to the diagram provided in section 3.1.3.  Electricity and Internet should be confirmed working at this time.

Following this, Spaceport will cede control of the launch site to the White Star team upon arrival. 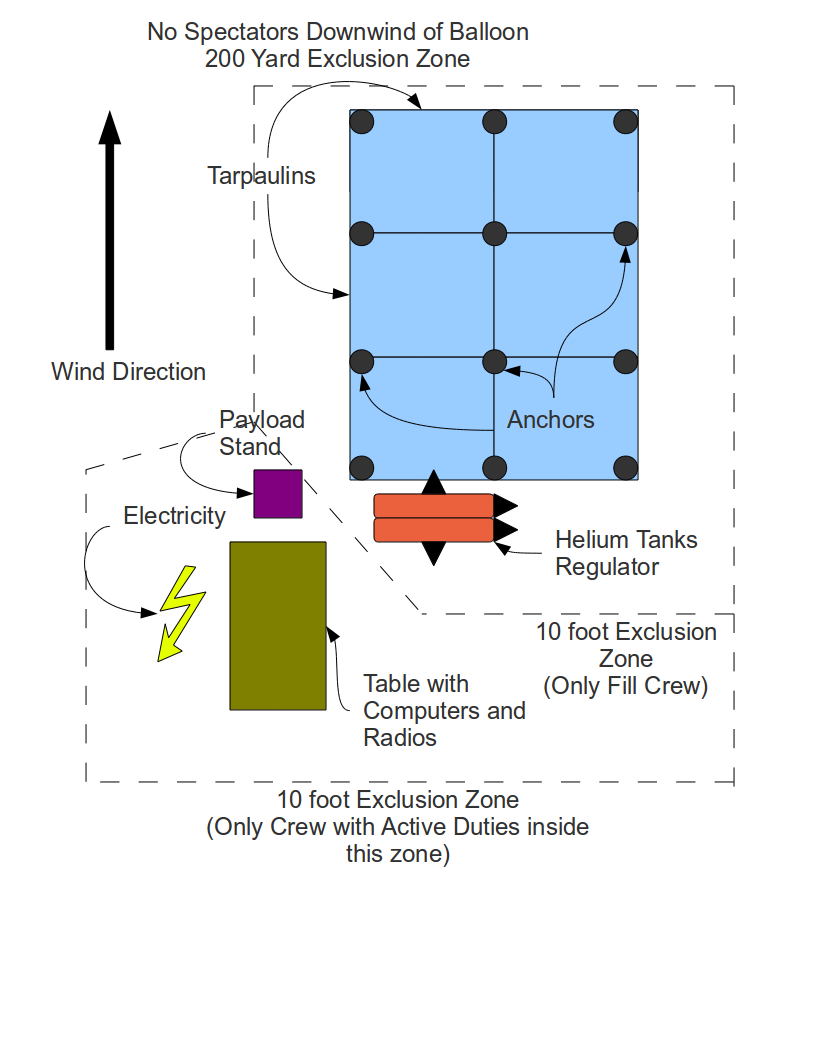 Upon arrival to the launch site, the White Star Team will unload the payload and balloon envelopes.  Upon verification of telemetry reception by ground computers, the payload is to be switched to flight power.  At this time, mission control will be notified of the switch to flight power, and all telemetry uplinks will be reconfirmed.  After payload operation is confirmed following the switch to flight power, the fill team will begin the layout and filling of the balloon.  The top sensor will be inserted in the balloon envelope, rigging lines will be laid out, and the envelope will be filled according to specified documentation and training.  While the envelope is being filled and rigged, the ballast container will be filled with the flight ballast, and the final payload weight will be measured.

Immediately following fill of the flight envelope, the payload will be connected through quick-connect rings, and launched.  A runner shall ensure the payload is launched properly, as per specification.

Appendix A – Other Resources

The Wiki is the principal resource for policy: http://wiki.whitestarballoon.com

Further checklists, log sheet and pamphlets are provided for each position.