Thanks to the hard work of our developers and educators, we are proud to announce the new Etoys 5.0 release, which you can now <a href="http://squeakland.org/download"> download </a> from our website!

Find more details about these features below. You’ll also find a list of other changes, fixed bugs and known problems at the end of the document.

At the top of each scriptor, next to the yellow-and-black ! button, will now be found a new button with a black arrow in a white circle:

When you click on that button, the first tile in the script will be executed. A black frame appears around the tile which just has been executed.

button to single-step your way through the script.  This can be very useful in understanding and debugging scripts.  The feature is often best used together with “watchers” to monitor the values of variables used in the script as you step through the script.

Two kinds of “Number Lines” will be found in the Graphing category of the Objects tool, a vertical one and a horizontal one (a green example of which is shown above.).  The scale, the values represented along the line, and other properties of the line are most easily explored and adjusted using the “number line” category of the number line’s viewer. 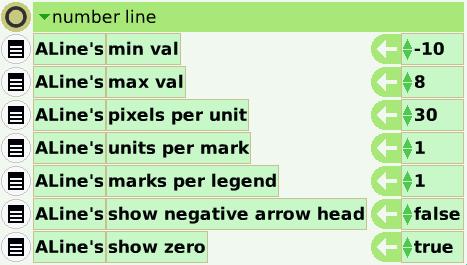 The min val and max val tell the minimum and maximum values represented by the line.

The pixels per unit tells how many pixels on the screen should correspond to one “unit” on the line.

“units per mark” tells how often there should be little “tick marks” along the axis.

“marks per legend” tells how many unlabeled marks there should be between successive labeled marks.

“show negative arrow head” governs whether an arrowhead is shown at the “negative” end of the line.

“show zero” governs whether the legend “0” should be shown at the appropriate place along the line.  This is useful if using two perpendicular number lines as axes for graphing -- showing a “0” legend for both axes usually looks bad; this option allows you to suppress one of them.

If you resize a number line with the yellow halo handle, it will affect the max val

Number lines, especially when “color-coded”, can be useful for cuisinaire-rod-like activities.

They can also be used as “axes” for providing a desired metric for graphing values, as described elsewhere in these notes.

The calendar is in the category “Just for fun” in the object catalog. It provides a scriptable calendar object, with a variety of useful items available in the 'calendar' category of its viewer. 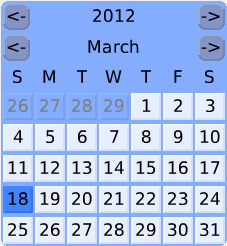 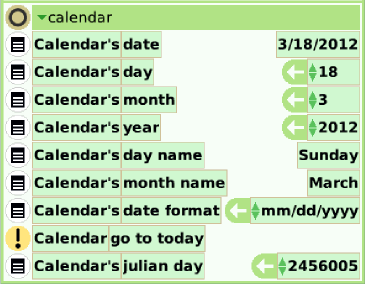 In the viewer you have tiles to access the whole date or day, month and year individually. You also get the day name, the month name and the julian day for the selected date.

You can set the date format of the calendar, e.g. ‘dd/mm/yyyy’ instead of ‘mm/dd/yyyy’. The “calendar go to today” sets the calendar’s date to your system’s current date.

See the “advents calendar” project in the gallery for an idea on how to use the calendar.

The "Sector" object corresponds to a sector"of a circle.  Its viewer offers items reporting the angle and radius of the sector, in degrees. You can find the Sector in the Graphics category of the object catalog.  Drag a new Sector out and drop it somewhere, then put up its halo and open the viewer.  In the viewer, there is a new category “sector” with three tiles.

If you set the “Sector’s showing handles to true, a yellow circle appears on the sector. You can move the handle and thereby change the angle of the sector.

You can also change the sector’s angle by typing in a value in the Sector’s angle tile or by assigning a value to the tile in a script. In the same way you can manipulate the radius of the Sector.

You can use the sector tool to create slices of a pie of any angle for applications like fractions or drawing.

ScratchConnect provides a way to connect Etoys and Scratch via "Scratch Remote Sensor Protocol" made by Koji Yokokawa.

Scratch can be connected with multiple clients simultaneously, so that it can make multi-player games using multi-Etoys as controllers of the game. ScratchClient Morph can also receive messages from Scratch which can be used within Etoys..

You find "define a new custom event" in the "more..." submenu for the script trigger. That lets you define new triggers in addition to the built-in "mouseDown", "mouseUp" etc. (you need to name it "broadcast:go".?)

One idea is to have each laptop as its own game controller, with the Scratch project as the "Game Board/Display" (Tried with two versions of Etoys connected to one Scratch sending messages and it worked fine).

Another idea: kids could enter their answers/comments from their desks;  optionally the teacher could see the answers and then display them all at once. Could be used for team games etc.  This addresses the problem of the teacher only being able to hear one answer at a time and when one kid answers, the others don't have to think or simply copy and the teacher is not aware of what is going on with all the kids.

Besides being really fun and motivating, it really makes messages much more visible and tangible.

With the new camera object in the object catalog, category “Multimedia”, you can immediately access any camera connected to your computer. Drag the camera object on your screen and you will see what the camera sees.

This has been working under Linux for a while, but now it is available for all platforms.

A new “Key press” object will be found in the “Just for Fun” category of the Object catalog.  This object will report whether the particular key you tell it to be watching for is down, and, if so, for how long.

You can have many different key-press objects in the same project, each associated with a different key. This information can be especially useful in building multi-player games and other keyboard-navigated activities.

Now type any key and, and that will become the new “current key” that this key-press object is watching for.

The “key is pressed” variable is a boolean value that will be true whenever the object’s “current key” is down, and false whenever the key is not down.

“Time pressed” is a number telling, when the key is down, how long it has been down, reported in milliseconds.  Once the key comes back up, this variable resets to zero.

In addition to unlabeled (“simple”) watchers and labeled (“detailed”) watchers, which are free-standing objects that allow the value of a single variable to be monitored and changed, there are now “attached” watchers, which will appear near some corner or edge of the object to which they pertain, and which will appear to “follow” that object as it moves, or is moved, from place to place.

Attached watchers allow you to keep an eye on the values of variables of interest in an object while looking at the object itself; if you are watching many values in many objects, this can make it easier to keep track of which data pertain to which object.

A newly-requested attached watcher will automatically be placed at some unoccupied position on the periphery of the object, but  it can then be repositioned, if desired, by getting a halo on the watcher itself, and from there either using items “choose attachment edge...” and “offset” found in the watcher’s own halo menu:

or opening the watcher’s own Viewer and adjusting these values there:

Delete an attached watcher the same way you delete any watcher:  get a halo on it, and use the pink-colored X handle to dismiss it.

Also, if you delete the object being watched, its watchers will be deleted as well.

A new “graph paper” tool allows you make graph-paper-like backgrounds to use as the “color” of any playfield, or of the entire etoys “world”.   The graph-paper tool can be invoked either from the “fill style...” menu item in the playfield’s halo menu or from the color-picker control panel obtained when you click on the magenta “recolor” icon of a playfield or world.

Here is a reduced-scale picture of the tool in use, with its current settings reflected in the playfield to which it pertains shown to its left: 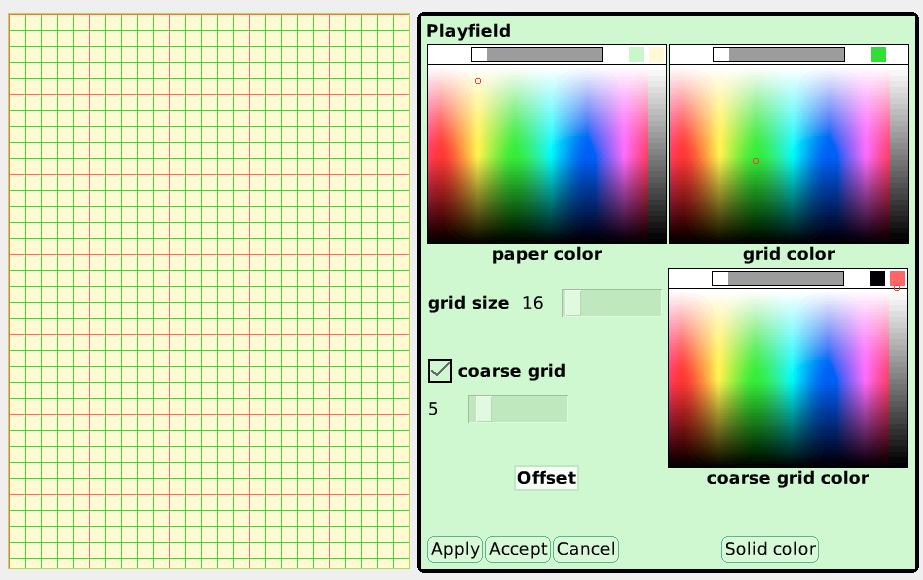 The “Press me” button has been removed from the supplies flap, because it’s not easy to grasp how to use it (but it is still available in the object catalog.)  In its place in the Supplies flap will now be found a “Polygon.”

The order of the items in the “pen use” category has been changed to make the most commonly-needed items easier to find.

"Open script" halo handle for ScriptActivationButtons, offering a faster way to see the script that will be fired when the button is pressed.

“Button to show/hide this script” menu item in Scriptor gives the user a button which, when pressed, will make that Scriptor appear on the screen, or, if already there, will remove it.  Once you get such a button, you can use items in its halo menu to adjust the wording and other aspects of the appearance of the button.

The treatment of the “forward direction” when the “look like” tile is used has been changed; the forward-direction of the “object being looked like” is no longer being adopted by the object doing the look-like.  This change may make some projects created in earlier versions of Etoys behave differently if they use the “look like” tile.

Fonts for a few languages are missing from the Macintosh.  These require Pango, which is only available for Linux. If you choose “Chinese” you are asked to install additional fonts. Click “load font” to get the font which is provided by Etoys. But before you can change back from Chinese to another font, you need to quit Etoys and restart.

Projects created in version 4 of Etoys (late 2009  to March 2012) should load without difficulty into Etoys 5.  But some projects created in the new version will not be usable in older versions.  If you try to load a project created using Etoys 5 into an earlier version of Etoys, a warning message will be presented about possible incompatibilities.