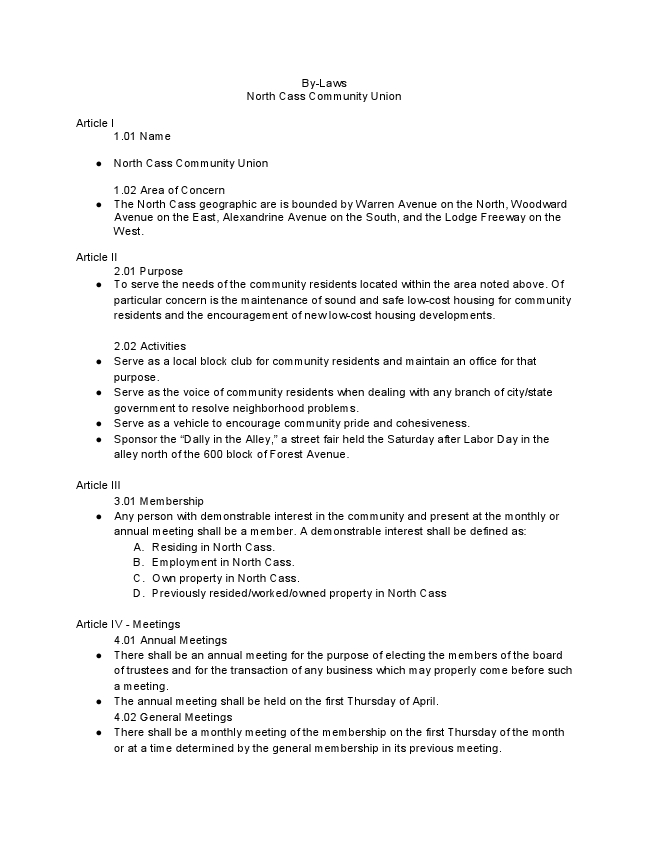 ● Serve as a local block club for community residents and maintain an office for that purpose.

● Serve as the voice of community residents when dealing with any branch of city/state government to resolve neighborhood problems.

● Serve as a vehicle to encourage community pride and cohesiveness.

● Sponsor the “Dally in the Alley,” a street fair held the Saturday after Labor Day in the alley north of the 600 block of Forest Avenue.

● There shall be an annual meeting for the purpose of electing the members of the board of trustees and for the transaction of any business which may properly come before such a meeting.

● The annual meeting shall be held on the first Thursday of April. 4.02 General Meetings

● There shall be a monthly meeting of the membership on the first Thursday of the month or at a time determined by the general membership in its previous meeting. 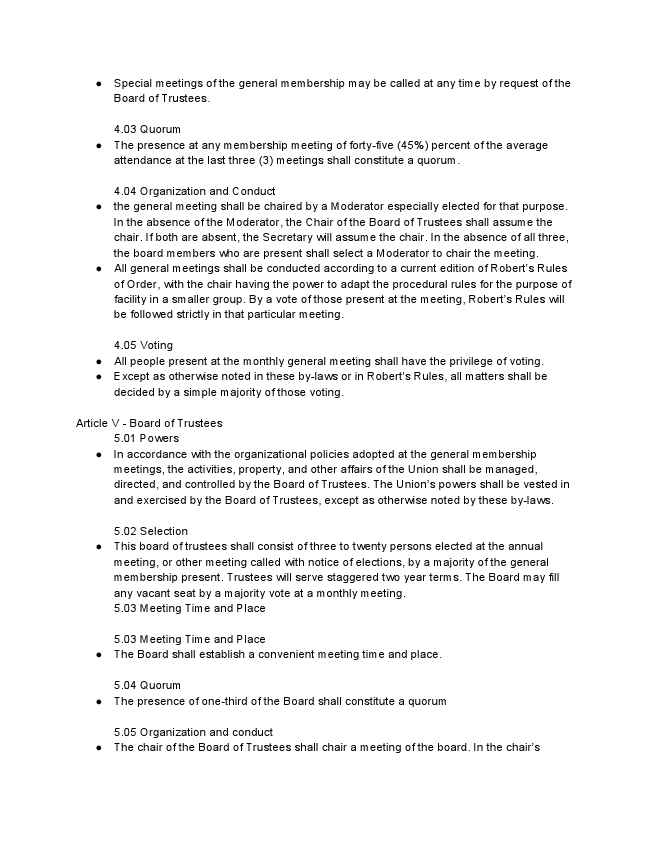 ● Special meetings of the general membership may be called at any time by request of the Board of Trustees.

● The presence at any membership meeting of forty-five (45%) percent of the average attendance at the last three (3) meetings shall constitute a quorum.

● All general meetings shall be conducted according to a current edition of Robert’s Rules of Order, with the chair having the power to adapt the procedural rules for the purpose of facility in a smaller group. By a vote of those present at the meeting, Robert’s Rules will be followed strictly in that particular meeting.

● All people present at the monthly general meeting shall have the privilege of voting.

● Except as otherwise noted in these by-laws or in Robert’s Rules, all matters shall be decided by a simple majority of those voting.

Article V - Board of Trustees

● This board of trustees shall consist of three to twenty persons elected at the annual meeting, or other meeting called with notice of elections, by a majority of the general membership present. Trustees will serve staggered two year terms. The Board may fill any vacant seat by a majority vote at a monthly meeting. 5.03 Meeting Time and Place

● The Board shall establish a convenient meeting time and place.

● The chair of the Board of Trustees shall chair a meeting of the board. In the chair’s 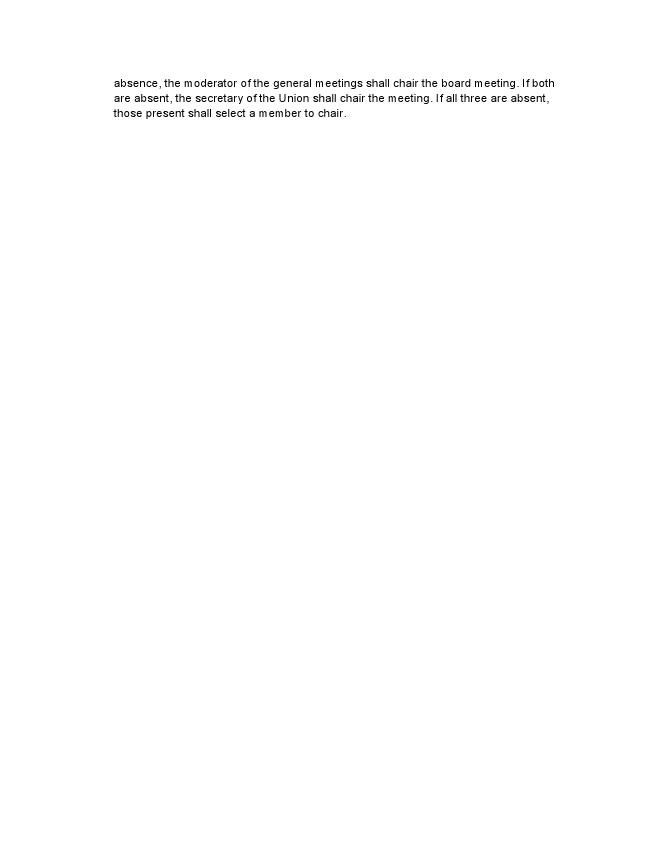 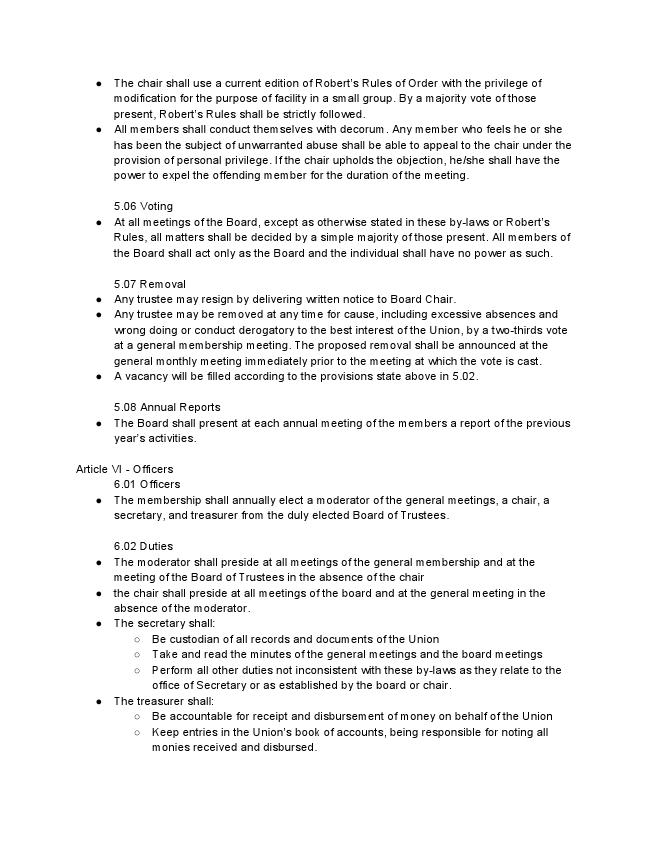 ● The chair shall use a current edition of Robert’s Rules of Order with the privilege of modification for the purpose of facility in a small group. By a majority vote of those present, Robert’s Rules shall be strictly followed.

● All members shall conduct themselves with decorum. Any member who feels he or she has been the subject of unwarranted abuse shall be able to appeal to the chair under the provision of personal privilege. If the chair upholds the objection, he/she shall have the power to expel the offending member for the duration of the meeting.

● At all meetings of the Board, except as otherwise stated in these by-laws or Robert’s Rules, all matters shall be decided by a simple majority of those present. All members of the Board shall act only as the Board and the individual shall have no power as such.

● Any trustee may resign by delivering written notice to Board Chair.

● Any trustee may be removed at any time for cause, including excessive absences and wrong doing or conduct derogatory to the best interest of the Union, by a two-thirds vote at a general membership meeting. The proposed removal shall be announced at the general monthly meeting immediately prior to the meeting at which the vote is cast.

● A vacancy will be filled according to the provisions state above in 5.02.

● The Board shall present at each annual meeting of the members a report of the previous year’s activities.

● The membership shall annually elect a moderator of the general meetings, a chair, a secretary, and treasurer from the duly elected Board of Trustees.

● the chair shall preside at all meetings of the board and at the general meeting in the absence of the moderator.

○ Be custodian of all records and documents of the Union

○ Perform all other duties not inconsistent with these by-laws as they relate to the office of Secretary or as established by the board or chair.

○ Keep entries in the Union’s book of accounts, being responsible for noting all monies received and disbursed. 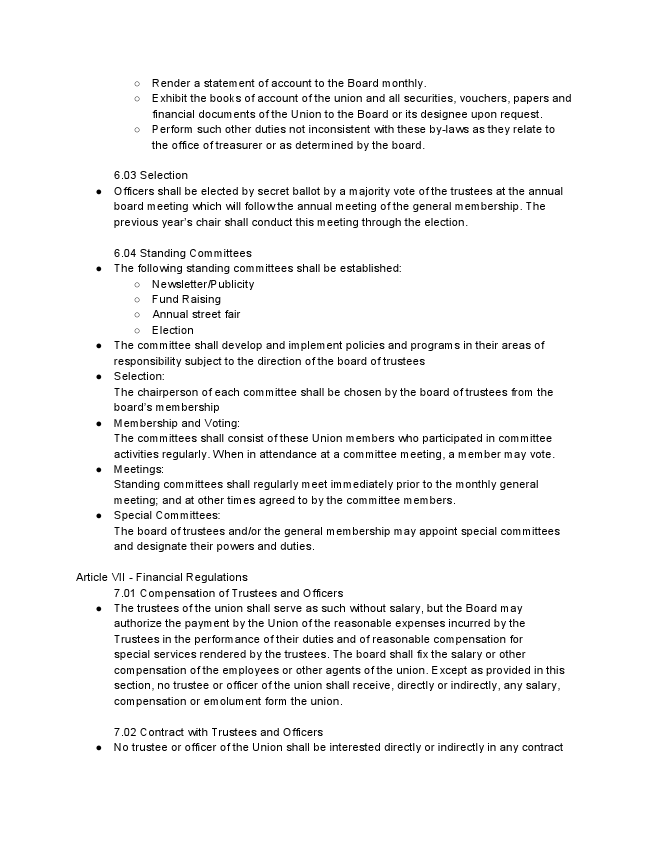 ○ Render a statement of account to the Board monthly.

○ Exhibit the books of account of the union and all securities, vouchers, papers and financial documents of the Union to the Board or its designee upon request.

○ Perform such other duties not inconsistent with these by-laws as they relate to the office of treasurer or as determined by the board.

● Officers shall be elected by secret ballot by a majority vote of the trustees at the annual board meeting which will follow the annual meeting of the general membership. The previous year’s chair shall conduct this meeting through the election.

● The following standing committees shall be established:

● Selection: The chairperson of each committee shall be chosen by the board of trustees from the board’s membership

● Membership and Voting: The committees shall consist of these Union members who participated in committee activities regularly. When in attendance at a committee meeting, a member may vote.

● Meetings: Standing committees shall regularly meet immediately prior to the monthly general meeting; and at other times agreed to by the committee members.

● Special Committees: The board of trustees and/or the general membership may appoint special committees and designate their powers and duties.

7.01 Compensation of Trustees and Officers

7.02 Contract with Trustees and Officers 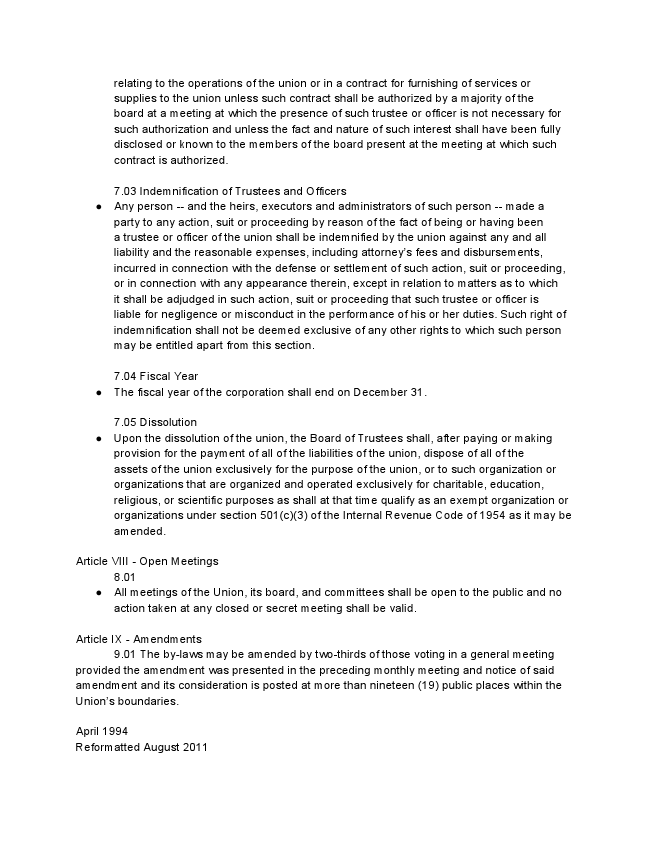 relating to the operations of the union or in a contract for furnishing of services or supplies to the union unless such contract shall be authorized by a majority of the board at a meeting at which the presence of such trustee or officer is not necessary for such authorization and unless the fact and nature of such interest shall have been fully disclosed or known to the members of the board present at the meeting at which such contract is authorized.

7.03 Indemnification of Trustees and Officers

● Any person -- and the heirs, executors and administrators of such person -- made a party to any action, suit or proceeding by reason of the fact of being or having been a trustee or officer of the union shall be indemnified by the union against any and all liability and the reasonable expenses, including attorney’s fees and disbursements, incurred in connection with the defense or settlement of such action, suit or proceeding, or in connection with any appearance therein, except in relation to matters as to which it shall be adjudged in such action, suit or proceeding that such trustee or officer is liable for negligence or misconduct in the performance of his or her duties. Such right of indemnification shall not be deemed exclusive of any other rights to which such person may be entitled apart from this section.

● The fiscal year of the corporation shall end on December 31.

● All meetings of the Union, its board, and committees shall be open to the public and no action taken at any closed or secret meeting shall be valid.

9.01 The by-laws may be amended by two-thirds of those voting in a general meeting provided the amendment was presented in the preceding monthly meeting and notice of said amendment and its consideration is posted at more than nineteen (19) public places within the Union’s boundaries.