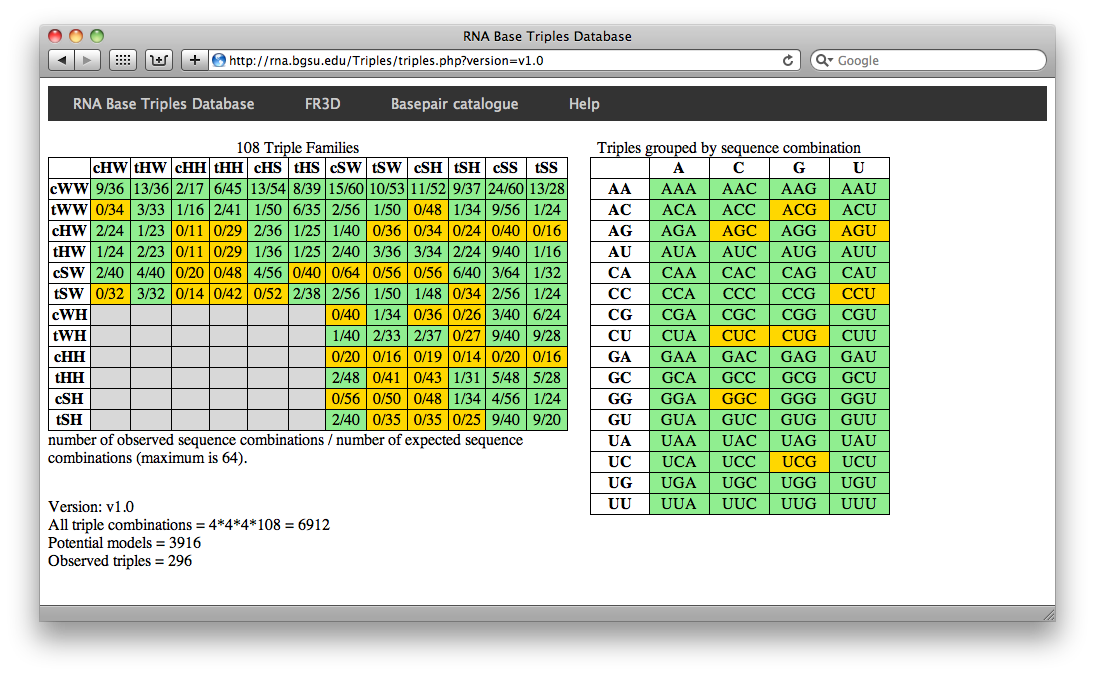 The main page can be accessed at http://rna.bgsu.edu/Triples. The data are organized in two tables: 108 triple families on the left and 64 sequence combinations on the right. If a triple family or a sequence combination has been encountered in the Non-redundant list of RNA 3D structures, then the corresponding cell is colored green. If no instances have been observed in 3D structures, the cells are colored orange.

The RNA Base Triple Database supports versioning, making it easy to access different releases independently. By default, the current version of the database is loaded (version 1.0 at the time of writing), but previous releases can be selected from the dropdown menu: 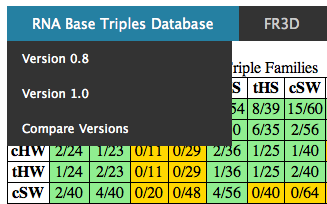 Version number is also clearly indicated in the urls of all pages to facilitate referencing, for example:

Versions can be compared via an online tool available at http://rna.bgsu.edu/Triples/compare.html

1 - the sequence combination may form, but only “near” examples have been observed meaning that one or more constituent basepair is classified as “near” by FR3D (llight-green background). Clicking on the “near” link will display these near instances on the same webpage.

2 - the sequence combination can potentially form, but has never been observed (orange background).

3 - the sequence combination is not expected to form and has never been observed.

Most elements on the page are clickable. For example, clicking on the number of clashes will bring up interactive KiNG applet, where the clashes are shown as red dots.

Clicking on the number of instances with show all instances using Jmol applet.

Note that the clashes have been calculated only for exemplars and predicted models. Thus, in case 1 on the picture above, the number of clashes refers to the model and not to the near instance. This is due to the fact that it may not be very useful to select a centroid from near instances and calculate its clashes because near instances can be quite diverse.

Both models and exemplars can be superimposed in the Jmol window on the right of the screen by clicking on checkboxes located next to sequence combinations in each cell.

Please email your questions or comments about the website to Anton Petrov (apetrov A T bgsu.edu).