23rd Nov 2011- The red kite has been spotted in and around the glen for the past fortnight and we have regularly seen red squirrels who are active later this year due to the mild weather. Next week may bring a winter coat of snow to the glen and offer some spectacular views of snow topped hills.

5th Nov 2011- While out stalking hinds on Saturday we were circled by a pair of eagles who seemed a little bit agitated. We were soon aware of a third pair of wings much closer which belonged to a wayward red kite! The first we have ever seen this far west.

28th July 2011- Fantastic sight of around 100 red stags crossing a ridge into the next glen in late afternoon.They moved completely unhurried along a deer track used for generations and through the scope we could make out a mass of antlers along the misty skyline

13th July 2011- Amazing sighting of a pair of eagles yesterday...As we were spying through the mist for a large group of red stags that summer in the glen something caught our eye halfway down the hill in front of us. Soon a pair of golden eagles were circling less than 500 yards away below the ridge-line. As we watched the larger of the pair swooped diagonally across in front of us and disappeared into a gully. The other casually dropped down onto a large triangular rock around 200 yards in front. As we had the tripod and scope out already we were able to watch for around 10 mins at close range until it too dropped into the gully...Awesome!.

The glen is stunning at the moment and our safaris with lunch at Monachlye Mhor Hotel are proving popular...a great way to spend a few hours and enjoy some fine local cuisine!

28th June 2011- Many thanks to Catriona Thomson for the review in The Scotsman yesterday. It was a pleasure to take you all out and I’m really glad you had a great time staying at Monachyle Mhor

‘After a wonderful breakfast we spent the morning with Alan Sneddon from Hidden Glen Safaris.As the former Monachyle  Farm Manager he is well placed to show off the countryside. Heading to the hills,we were lucky to see both grazing red deer and soaring golden eagles.He adeptly brings to life the story of Rob Roy,who was buried at the kirk in nearby Balquhidder’

23rd June 2011- Lots of great sightings of eagles over the past couple of weeks.The stags that summer in the glen have arrived at their normal time and we counted nearly 100 last Thursday.Some of the younger stags are looking like they’ve had a hard winter  with not a lot of velvet showing.They should pick up quickly though with the good summer grazing.

2nd June 2011-Fantastic day today with a golden eagle right above the village in the morning.He almost followed us right up the glen!.We headed right out the west road and had spectacular views back down the glen in the most amazing light.The afternoon turned out to be a scorcher and there was some stunning sights of red deer outlined on the ridges.We saw the big stag again who lay about 80 yards from us and took no notice in the shade of a large blackthorn bush.Just incredible!!

25th May 2011-Great couple of weeks with very mixed weather.Plenty of stags around at the moment with the older beasts now well up in antler growth.We saw one magnificent stag in the lower glen with a huge head and almost in his summer coat.( I bet he’s been in a few gardens this winter!).Eagles seem to be hunting further west at the moment.

08th May 2011-Low mist for a time this week but plenty of great sightings of deer and kestrels.Land Rover proving its worth in the greasy conditions!

28th April 2011-Superb spell of weather with stunning mirror reflections on the loch. We stopped to admire the view with soundtrack of woodpeckers and almost constant calling of cuckoos who have returned a wee bit early this year along with the sandmartins up at the Braes.The deer are enjoying the spring sunshine and wev’e had some lovely sightings of woodland roe this week

23rd April 2011-Fantasic afternoon...the mist cleared before lunch and the air clarity was superb.Red Deer on both sides of the glen.A few hinds but mostly stags. Once the clouds opened up we were treated with a fabulous fly past of a young golden eagle being pestered by a pair of really annoying crows.

14th April 2011-A day of two halves...Cold northerly in the morning with low mist and black clouds threatening a downpour that never happened.We explored the lower glen and the rich local history..

After lunch the day opened up and the wind dropped...as we spied some red stags emerging from the top of a wood a flurry of crows low beneath the ridge caught our eye and the reason for their aerobatics soon emerged in the form of a golden eagle .It was soon joined  by another and we watched them for a while as they climbed up into the mist and out over the next ridge.

All the stags today had cast their antlers.

13th April 2011-Mist down to 1000ft today so no sign of eagles and deer difficult to spot.We watched a red squirrel foraging amongst some dead leaves under an oak tree...how incredibly busy it was and took no notice of us for a while .

It was  up a tree in a flash when Malcolm came past in his tractor!

The glen is full of new life at the moment and we have some lovely jet black Aberdeen Angus calves and some wee Hairy Highlanders beside the loch.Lambing has not yet started in earnest but there is the odd brand new bundle of wool starting to appear alongside the blackface ewes in some in-bye fields.By the end of this month lambing will be in full swing on the hill.

8th April 2011-Headed out the glen this morning,great to see the sun again and the waterfalls looking incredible after the rain of the past few days.We watched a pair of golden eagles spiral magnificently upward on a thermal for around 20 mins then set up the scope on some young red stags grazing out from the treeline.Amazingly we watched one actually cast his left antler and managed to pick it up later when they had moved off..Awesome!

4th April 2011 - What a fabulous day. Tremendous views westwards with very dramatic light and snow on the very tops. We were lucky enough to see 3 stags and a very unusual event, crows mobbing a red deer hind. 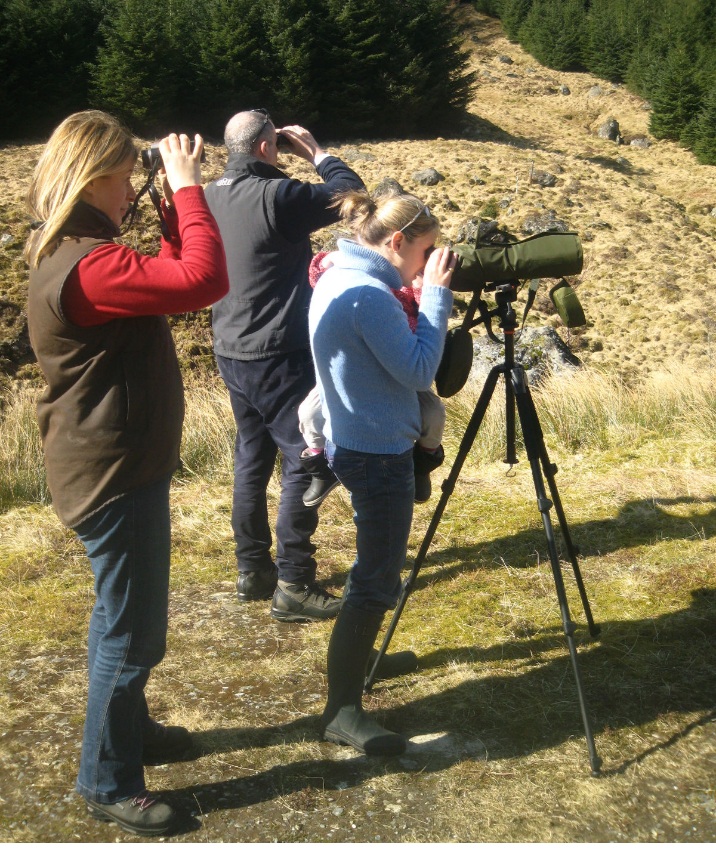 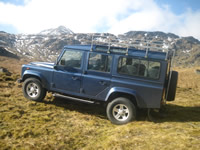 28th March 2011 - A friendly American family from Gleneagles had a real treat as we happened to see a leaping Atlantic Salmon in the river Balvaig. Very dramatic cloud formations over the tops kept visibility down, but in the woods we came across 4 roe deer grazing by the burn.