An introduction to the Arduino

What is an Arduino?

It is a development platform that will help you prototype an interactive object. Huh...that’s a loaded sentence, let me break that up for you:

With the Arduino, you can easily create whatever interactive gadget your heart desires. Well almost every gadget. You can’t create the next iPhone with the Arduino. The Arduino doesn’t have the computational power to do high-end graphics or audio. It is best suited for the basic control of electronic components.

Creating your interactive gadget with the Arduino will go something like this: you hookup some sensors (input) into the Arduino in order for it to sense the world around it in some way (light detection, temperature sensing, etc.). Then hookup some actuators (output), like a motor or an LED or a water valve, to respond to the thing it is sensing. After you setup your hardware, you hookup your Arduino to your computer via USB, open up the Arduino app, and code up the Arduino to behave the way you want it to using the sensors and actuators that you hooked it up to. Then spend some time trying to figure out why it doesn’t work the way you wanted it to.

Now that you know what to aim for when dealing with an Arduino. Lets actually get there (wherever it might be, which, if you are a true Arduino developer, you don’t know), by diving into the nitty gritty details of electronics and programming.

Go to http://arduino.cc/en/Main/Software and download the Arduino software for your respective operating system.

Follow the instructions on this page for your respective operating system: http://arduino.cc/en/Guide/HomePage, it will show you how to install the Arduino

and load up a sketch called Blink. Now a sketch is the software you’ll upload into the Arduino to make it behave like a desired gadget. The Blink example sketch will simply turn the Arduino into a gadget that blinks its onboard LED.

2: Hooking up to the Arduino

From the last step, you should have the Blink example loaded up to your Arduino. To make sure this is so, the onboard LED should be blinking. 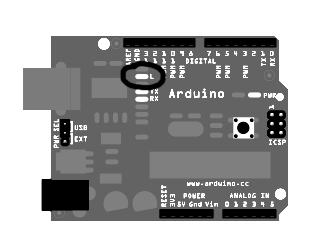 The onboard LED is the one circled, with the ‘L’ next to it.

Now let us take matters into our own hands and make our RGB LED blink. 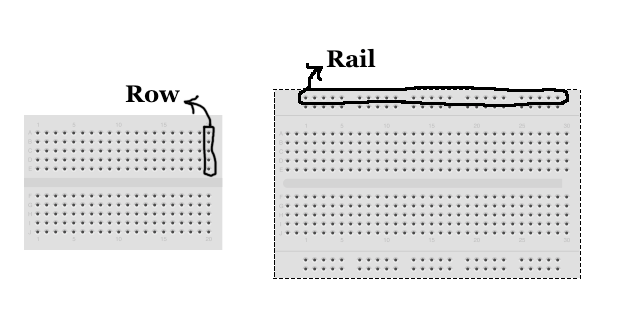 Don’t worry so much about the details. Just follow the diagrams, ask for help when you’re confused, and you (and the electrical components) should be fine.

UNPLUG YOUR ARDUINO BEFORE CHANGING CIRCUITS!

Now setup your circuit to make it match this diagram (the 33o Ohm(Ω) resistor is the one with the orange, orange, brown color bands on it): 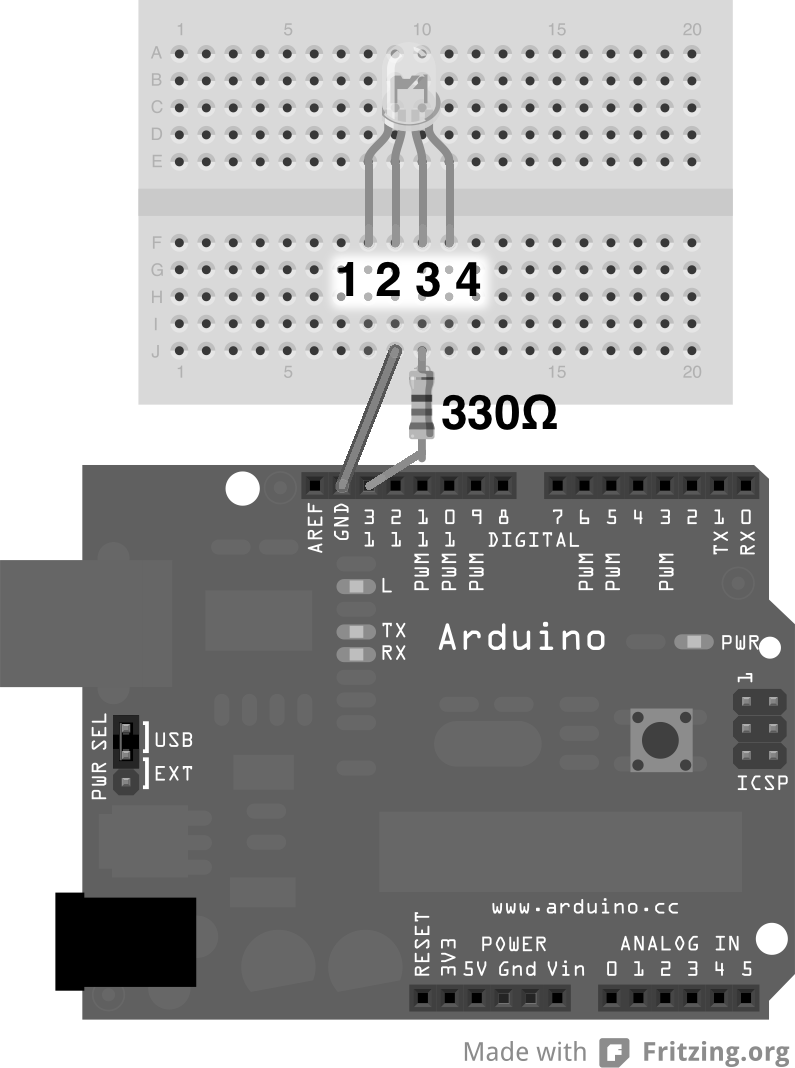 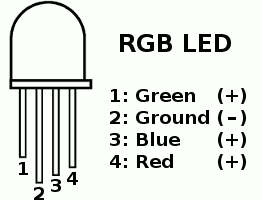 Plug your Arduino back into the USB board and the LED should blink.

Okay, it works, but what’s going on? Look at the Blink example code and notice “digitalWrite.” Also notice the number ‘13’ within the parenthesis and the word “HIGH.” Also notice that your LED is hooked up to a pin labeled number 13. What you are programming the Arduino to do is send 5 volts (HIGH) out of pin 13. This action powers the LED and turns it on.

Pin 13 is part of a row of pins known as the Digital Input/Output pin. You set these pins to either take in or output digital currents (electrical currents that simply go on and off). Right now, for this tutorial, you are only using these digital pins to output 5 volts of electric current.

Don’t worry about digital input, for the next step we’ll try to sense the real world, which, unfortunately, is analog and therefore we’ll be using the Analog input.

See that row of pins labeled “Analog In?” 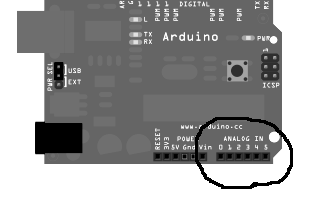 Each pin takes in electrical current that ranges from 0 volts to 5 volts. Arduino transforms the voltage it reads from that range and converts it to an numerical value between 0 and 1023. Using the value from this input, you can interact with the real world because you know what is going on outside your circuit.

The sensor we’ll be using for our input is the photoresistor, but we’ll call it a light sensor. The way it works is this: the more light that strikes upon the light sensor, the more voltage it allows into the analog input until it reaches a maximum voltage of 5 volts. Lets hook it up!

UNPLUG YOUR ARDUINO BEFORE CHANGING CIRCUITS! 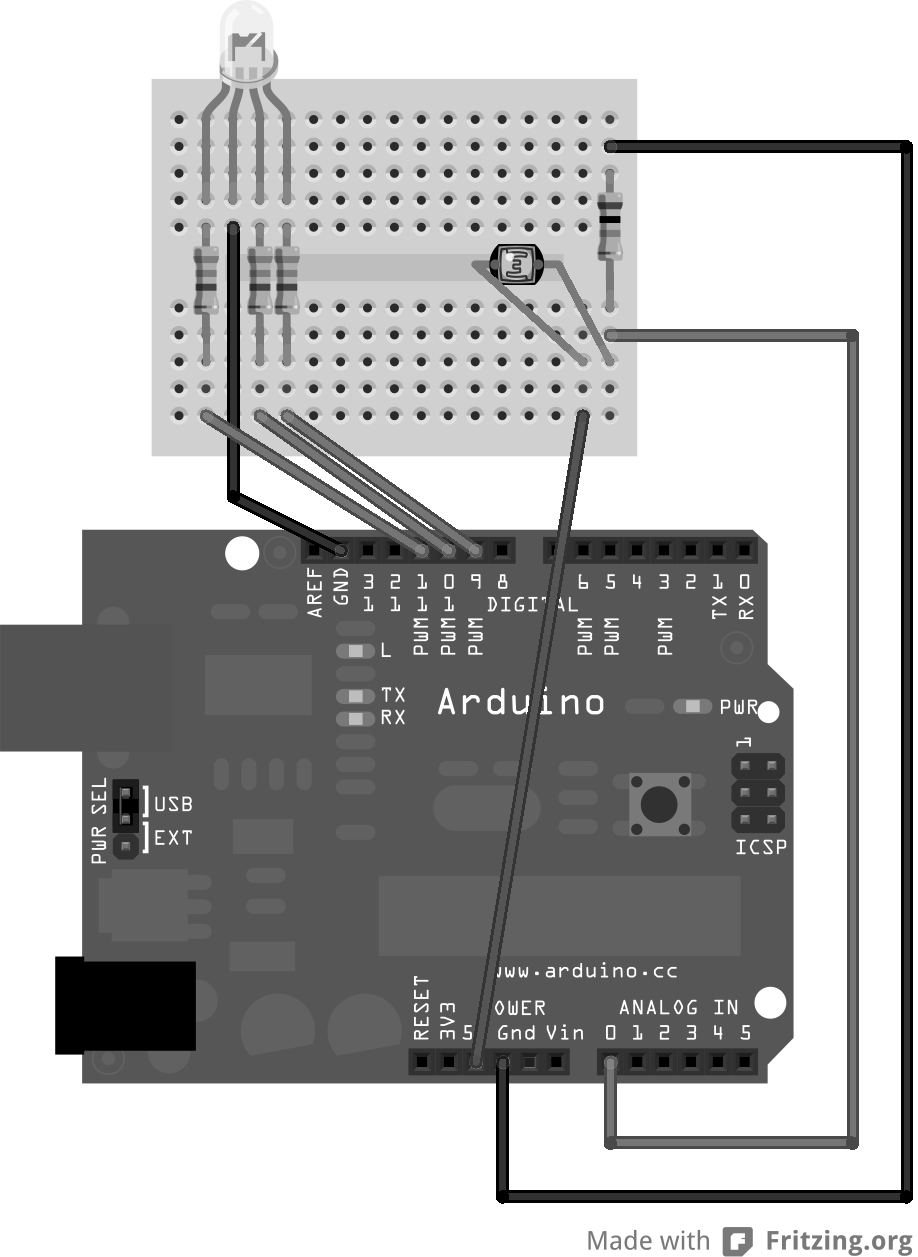 Plug your Arduino back into your computer, create a new sketch in your Arduino app called ‘ColorChangePerSwipe,’ go to http://www.datspace.net/introToArduino/code , click the link “Download Raw,” copy and paste the code, press the arrow icon

. If all is wired up correctly, your LED should alternate colors everytime a shadow passes over the light sensor.

Yet all we’re seeing is a LED. Boring. Let us give it some flair and put a paper cube over it.

Cut a hole on one face of a paper cube cutout, then fold and tape it. Carefully place this over the LED (and not the light sensor for obvious reasons) without wiggling the wiring (breadboard isn’t exactly a stable connection of wires). Presto! You have a pixel lamp ◕▿◕

Final Step: Hack Up Something New

The Arduino was created to allow you to tinker with ease. Mess around with your newly created circuit. Here are some ideas: find a better way to detect a hand wave using the light sensor, control your computer instead of the LED (or both) http://is.gd/6Q46Wz , use the PWM pins to fade the LED and get more ranges of color, or do something completely unexpected.

You can turn your Arduino into a single pixel display! You might learn about Serial communication (a way to have your software on your computer talk to your Arduino) when you review my Arduino code: http://pastebin.com/EsvaM7La