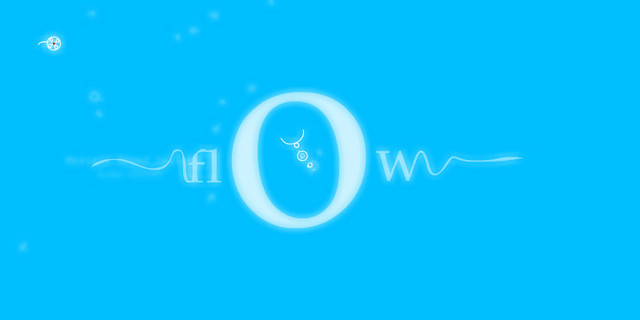 For those of you who played Jenova Chen's FlOw game,  you may have noticed that you easily get sucked in this contemplative aquatic world, floating fluidly from one prey to another. This game is simple and deep at the same time. The level design of flOw is based on a "sausage pattern" (Room - Gate - Room - Gate ...) like many games before and you can find the same ingredients that we've seen everywhere in game designs such as Enemies,  Power-Ups, Life, etc. But then, what makes flOw such a good experience? 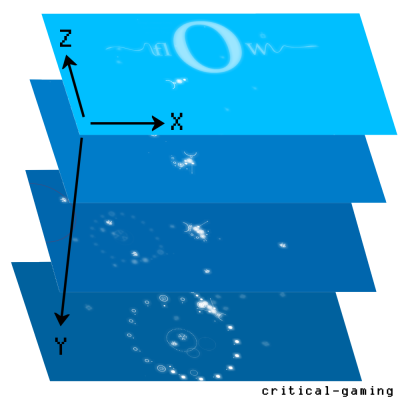 In flOw you incarnate some sort of aquatic creature that you control with the mouse. You have to eat other creatures around you to get stronger. You get to choose if you want to go deeper or come back in previous rooms simply by eating red or blue swimming plankton . Depending on your skills you may choose to "level up" by eating small preys, go directly to a deeper room where bigger foes awaits or come back to a previous room where it was safer. This simple player choice is the base of what Chen call's "User Centred Dynamic Difficulty Adjustment".

He base the notion of User Centred DDA on the theory of Optimal Experience (Flow) from Mihaly Csikszentmihalyi, a now well know psychology theory that has touched many domains such as Marketing, Management, Pedagogy, Video games and many more. One important point about flow theory is thatflow is not a synonym for "Fun". Flow state can be reached in efficient and rewarding work, aesthetic experiences and many other non-ludic activities. What Jenova Chen took from that theory is the main statements of Csikszentmihalyi about how to create the Optimal Experience and used them to support flow in a ludic activity:

Combining these criteria may support flow experience but as Csikszentmihalyi  notices: "not all are needed for flow to be experienced."

So! Jenova Chen's "User Centered DDA" is based on player's choices which corresponds to Csikszentmihalyi's  criterion 6: "Balance between ability level and challenge" and criterion 7: "A sense of personal control" . But Chen's flOw game goes deeper in Csikszentmihalyi's flow theory. The game mechanics of flOw (the game) answer more generally to criteria 1:"Clear and challenging but attainable goals". Eating and avoid being eaten are intuitive enough goals in themselves. criterion 5: "Direct and immediate feedback" for all player's  actions (moving, taking damage, eating and changing room).

Luckily enough for video games the criterion 8 "effortlessness of action" is nearly automatic. Indeed, if you choose to play a video game, it is generally because of an intrinsic motivation (looking for entertainment) so as long as the player is not forced to play the video game (which would break the definition of Play "free activity" anyway - CAILLOIS 2006) we can assume that there is "an effortlessness of action" but as we will see later, "frustration" can be one good way to break criterion 8.

As for the other criteria (2,3,4 and 9) of the Optimal Experience, they can all be related to the notion of  "immersion" in a very large sense. Immersion will depend on many things such as aesthetics, context, nature of the game mechanics (required skills), topology and domain of the game and many "non-diegetic" elements that may affect the player's experience. These will strongly vary from one player to another.

Jenova Chen's flOw seems to reach these all of the flow experience criteria with it's atmospheric aesthetics, the never stopping yet well balanced player experience based on a good difficulty progression with a good learning curve, extremely simple game mechanics and "User Centred DDA". However, flOw is not the only game offering  Dynamic Difficulty Adjustment. The concept has been around for a while now but it is not always "User Centered". 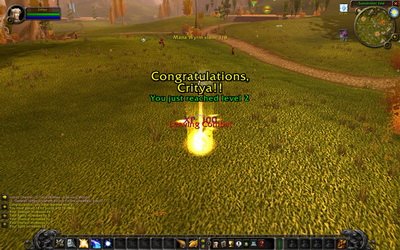 (World Of Warcraft - "Grinding" in RPG's is "User Centred" DDA)

The main difference between  "User Centered DDA" and common DDA is that with User Centred DDA the player has a stronger "sense of control" and can gauge the "balance between ability level and challenge " (criterion 6) by himself. Other games types uses this simple but effective mechanic. RPG's  "Leveling-Up" system is based on the same principle of "User Choice". He choose's when to level-up and when to move to a new location to face stronger enemies. Other types of games let the player choose its own course and navigate freely between different challenges. Letting the player choose which challenge to try out and allowing him to do it safely (without major frustrations) let the chance to the player to discover his limits and improve at his own rhythm.

A good learning curve should provide the player with the necessary mastery to overcome the increasing challenges. In many old style games, when the player fails he has to restart at the begeining of the level and redo the already mastered parts to get back to a good challenge and get better. This type of Difficulty Adjustment may lead to a flow state in certain ways.  Lets have a look at it.

In a game like Super Mario Bros, the difficulty curve is totally fixed (except for secret passages of course ;). The player has no other choice than going forward and overcome presented challenges. Criteria 1, 2, 3, 4, 5, 8 and 9seems to be possible as long as the player's skills fit the challenges (criterion 6) but dying will break the immersion so he will loose "focus", regain "self-consciousness" and his "sense of time", the "balance between skills and challenge" will be lost thus breaking his "feeling of personal control over the situation". Criteria  1, 5, 8 and 9 will still be respected and as Csikszentmihalyi  noted:  "not all are needed for flow to be experienced."

On the other side, the will to restart after dying will depend on the motivation of the player. If the frustration of dying is too strong, the player will most likely stop to play and recovery of the flow state will be impossible. Failing to overcome the same challenge many time will lead to frustration and eventually to apathy.  Has deserthat notices in his article, "... you can’t simply drop back into a flow state if the player is frustrated",  you have to bring the player back to the boredom level where he feels safe and increase the challenge again until it is optimal and can be overcome. The balancing of a good difficulty curve is a very touchy job and that is whyDynamic Difficulty Adjustment as been the center of attention of many game developers. 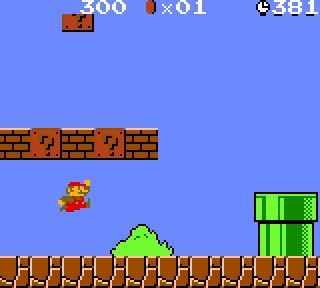 The idea of DDA in itself is very compatible with the flow theory. The challenge level of the game is constantly adjusted depending on direct feedbacks from the player's performance. The main issue with such system is the difficulty pattern the DDA Artificial Intelligence follows. In this very interesting article by Adam Saltsman some exemples of DDA are Given. Games Like Mario Kart and Left For Dead implemented two different strategies of DDA.  Mario Kart follows the "Rubber Band" pattern, making the opponents follow the players performance. The downside of this strategy is that the player loses the "sense of personal control" of criterion 7 because the opponents will slow down if the player is too far behind and will catch up with the player if he is first in the race, making the player efforts seemless. This computer trick can break the flow if it becomes too obvious and attracts too much attention on itself rather than keeping the player "concentrated" (criterion 2) and "merged with his actions" (criteria 3 and 9). Also the feel of "unfairness" makes the Goal of the game less clear (criterion 1) and attractive since the player has no other reference than his opponents regarding his own performance. That said, for casual players, the trick will probably work for a while and it will give a fair amount of enjoyment to the appropriate target audience. 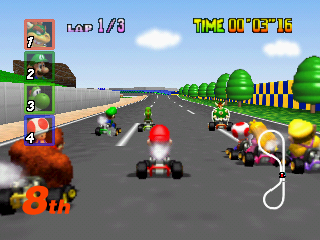 On the other side, Left For Dead plays with the amount of enemies, the pacing (respawn time) and the pickup items (health/weapons/ammo). Since the narrative setting of this Multiplayer First Person Shooter  is a Zombie Apocalypse, the idea of constantly being in trouble is supportable and consistent with the game's universe. The DDA system does not attract attention to itself and leave the player in a state of flow even when he dies (unlike a fixed difficulty curve would have done) as long as the players has the motivation to continue. The difficulty curve is tightly tuned so the player will always face a good amount of challenge on the computer side. The target audience of Left For Dead differs greatly from Mario Kart's target audience and the difficulty level feels appropriate and competitive but is still adaptive behind the curtains. One thing that this DDA system does not support is the team work. the game is presented as an experience made for a team of 4 players and the flow state may be broken by uncooperative team mates. Here again the criterion 7 "sense of personal control" will be a flow breaker if it is flawed by a dysfunctional team work. 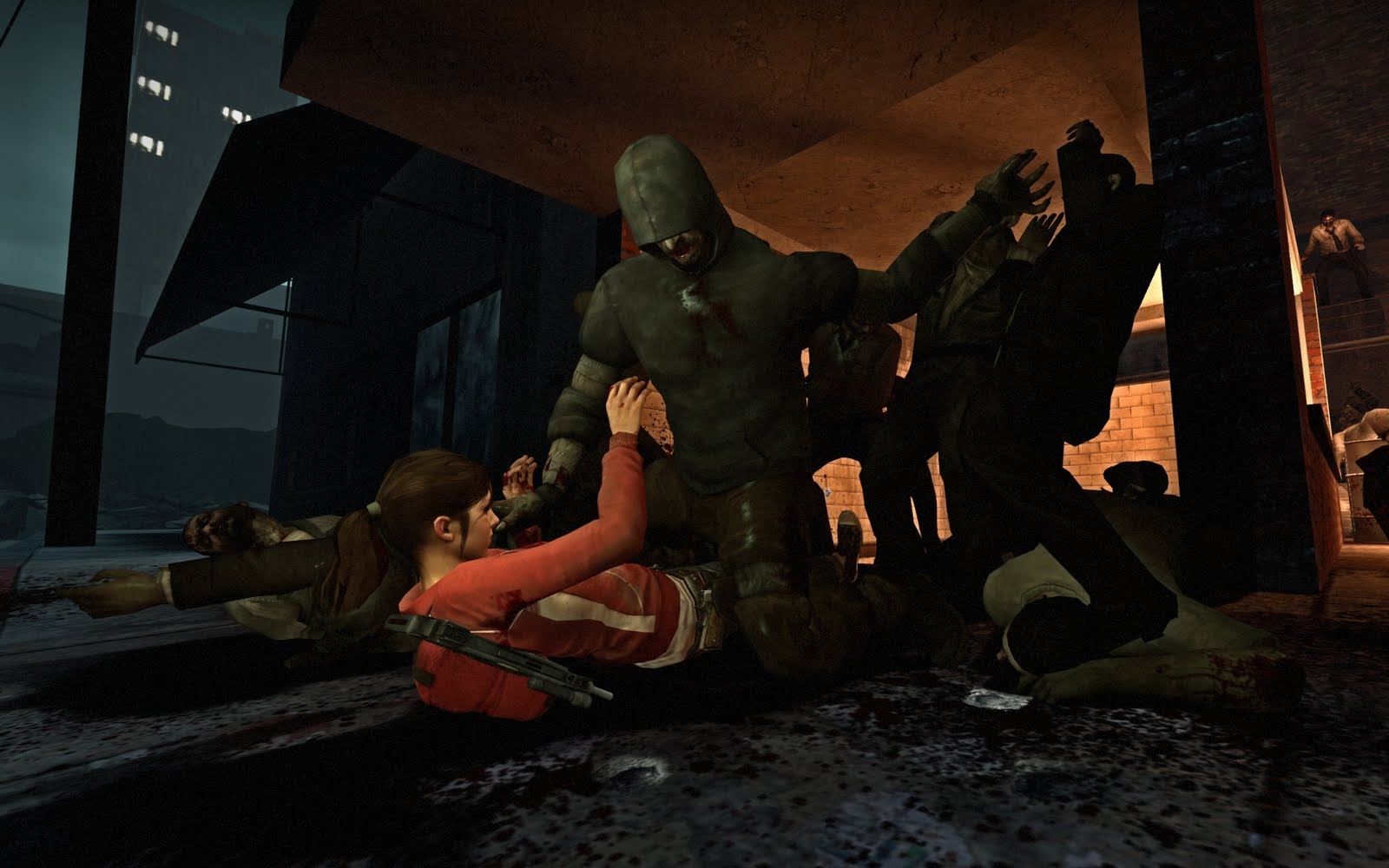 Here we loop back to the notion of flow and "User Centered DDA". Has we have seen earlier: "not all are needed for flow to be experienced"Though some criteria like criterion 6 : "Balance between ability level and challenge " and criterion 7: "A sense of personal control over the situation or activity" may be serious flow breakers in video games using "fixed difficulty curves" or DDA. The main advantage of "User Centered DDA" is to allow the player to control his own experience and follow his own difficulty curve without major frustrations towards the game. Again, a tight tuning of the challenge is necessary to keep the flow state. Games like Jenova Chen's FlOw exploit the usesr choice and present him with a well paced difficulty curve that the player can make more easy either by "leveling up" or harder by doing it the "hard way" and racing to the bottom to face a disproportionned ennemy.

Finally, the User Centred DDA in flOw is possible because of the absence of time constraint. Since the player has no imperative to go forward (like time countdown) it creates a feeling of "free play" (paidia - CAILLOIS) wich contrast with the criterion 1: "Clear Goals". At the begeining of this article I stated that "Eating and avoid being eaten are intuitive enough goals in themselves" but the player could always stay in the first levels and avoid being eaten, enjoying to swim and eat small plankton. The reason he will continue to the next level is the intrinsinc motivation driven by the autotelic nature of videogames : having fun.