Understanding ‘Running Effectiveness’ and its Uses

Running Effectiveness (RE) is a metric originated by Andrew Coggan, PhD.  In his July 2016 article, WKO4: New Metrics for Running With Power, Dr. Coggan stated:

In originating this metric, Dr Coggan created one of the most important metrics associated with running with power.

RE is a simple, yet very powerful metric.  The equation is, quite simply:

Common Applications of RE 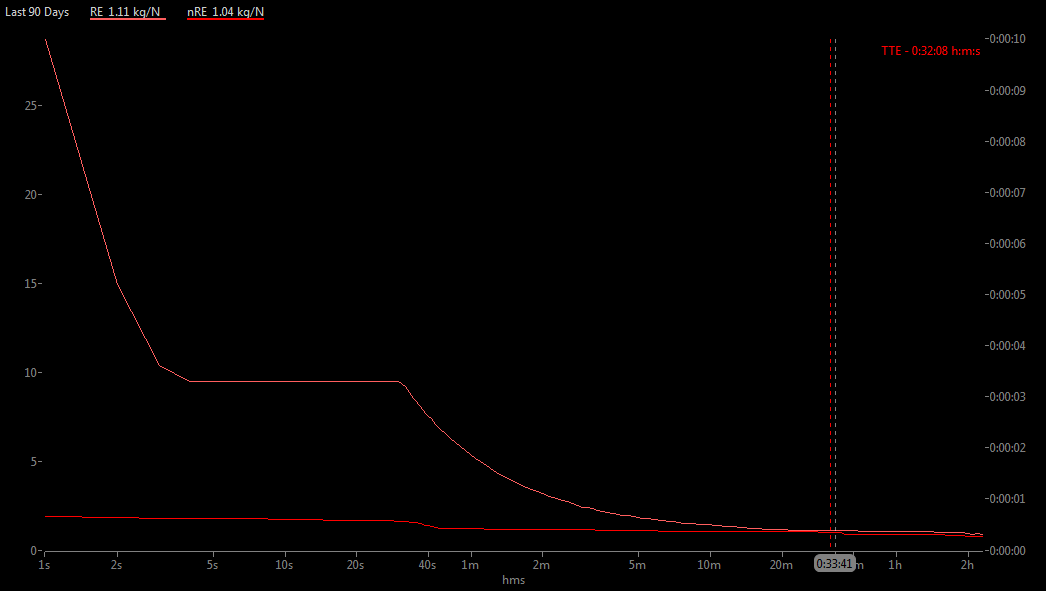 RE is also sensitive to grade.  RE is lower running uphill, given that speed is suppressed while power is not.  Conversely, RE is higher when running downhill.

RE may also be similarly sensitive to wind, where in a head wind, speed is suppressed while power is relatively less affected, resulting in a lower RE.

Therefore, at FTP, on relatively flat terrain, in good running conditions, it is likely that:

RE = >1.05 is likely the realm of elite world class runners

(Again, the greater the value of RE, the more “effective” the runner is at converting external power into speed.)

2) RE can also be tracked continuously in a chart of a run, race, interval, or run segment.  In doing so, one may see the impact of grade or wind.  Also, RE can be a gross indicator of fatigue - particularly on flat terrain without large changes in environmental conditions.  (figures 2-4)

Time on X-axis, RE on Y-axis.   RE = solid red line (SLR line dotted red)   This race was on a track in heavy wind conditions.  Particularly in the first half of the race, one can see that RE forms a recurring sinusoidal wave appearance.  In this case, RE falls as the runner runs into a head wind on one straight, and rises as the runner runs with a tail wind on the opposite straight.

Note that despite higher speed (and power, which is not depicted) on the uphill segment, RE is lower than on the easy downhill return.  Typically, RE is suppressed on uphills and amplified on downhills. 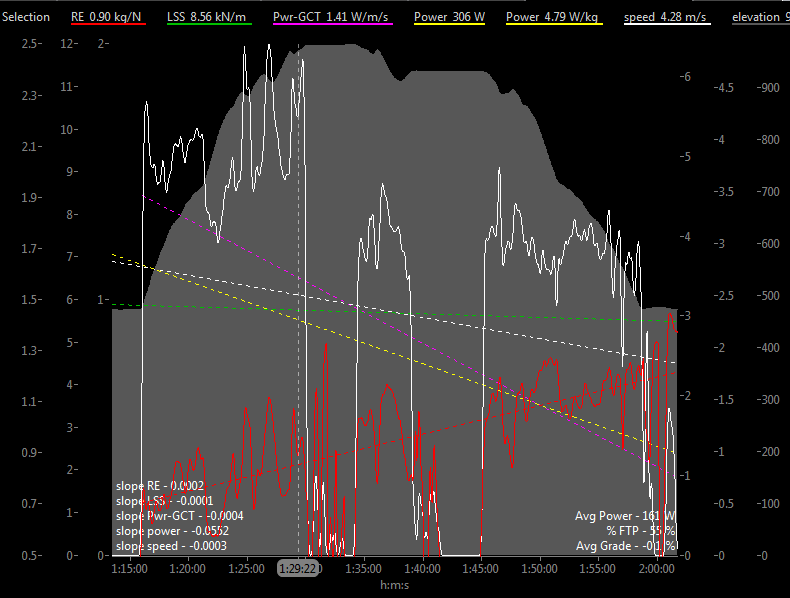 Note the subtle lower trend in RE, as depicted by the SLR line, suggesting a fatigue effect.  During this race there was a 3.6% decline in RE, comparing the last 2500m to the first 2500m.

In running, actualized speed is not solely the product of gross external power generated.  Two runners may have exactly the same power:weight ratio over a 10,000m course, yet, of the two, the one that is most “effective” at converting external power into speed (the one with the higher RE) will be the one that is more capable of producing the faster time.  To help clarify the relationship, let’s rearrange the RE equation:

Knowing this equation, this relationship, allows the coach or runner to design training programs to not only develop power (W/kg), but RE as well.  That said, it has been my experience that gains in power are easier to achieve with training manipulation than are gains in RE.  Nevertheless, attempting to improve RE, to improve the “effectiveness” at which the runner can convert external power into speed, is a worthwhile complimentary training focus.

How to improve RE

Improving RE is not an easy task (at least not as easy as improving power).  That said, the converse is true, frittering RE away is not likely seen in actively training runners.   In the end, the gains (or losses) will likely be subtle. 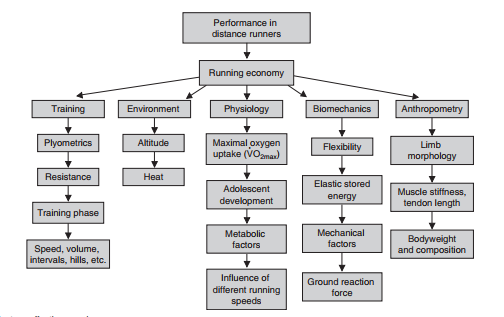 Figure 5.  Depiction of contributors to RE using the rearranged RE equation. 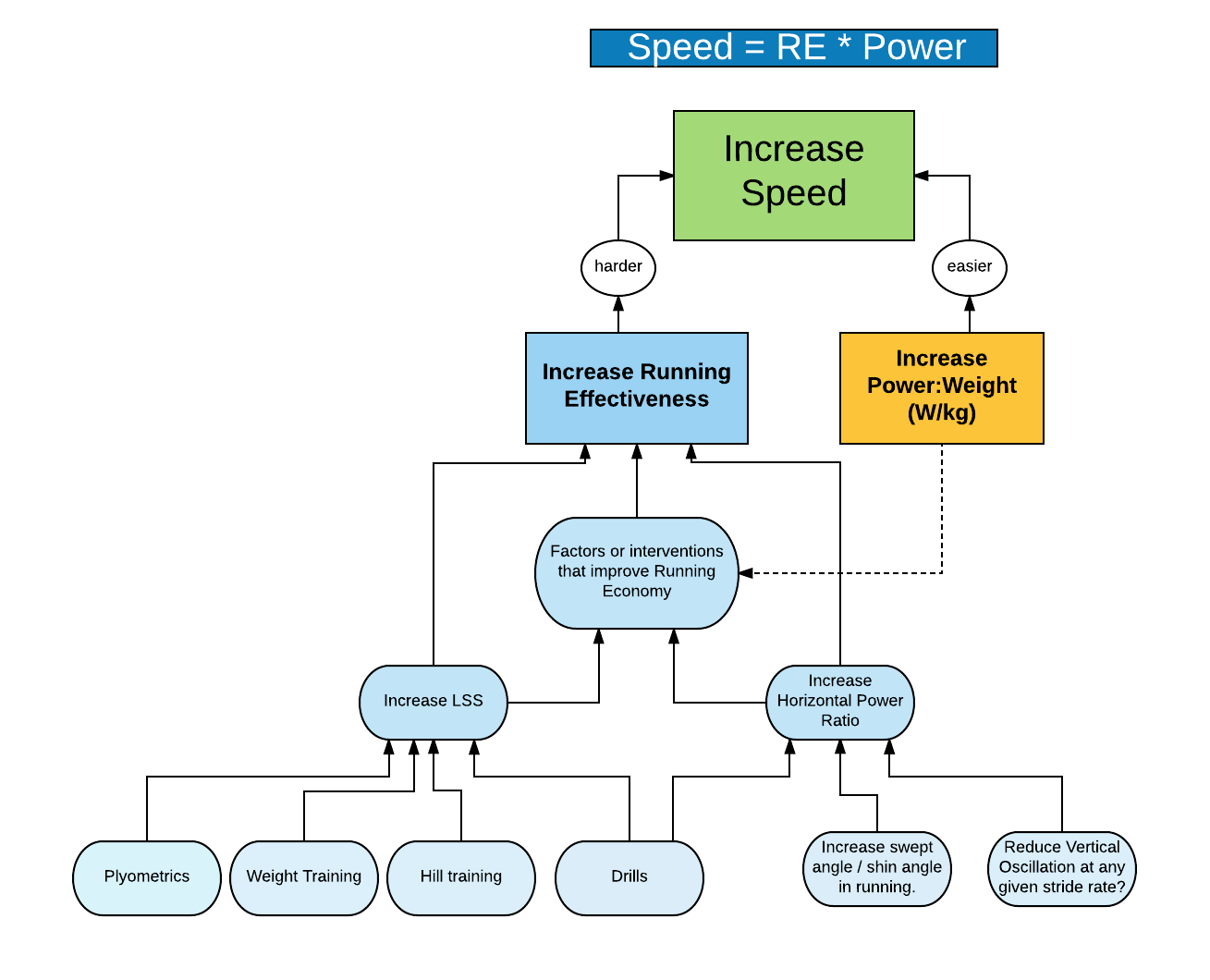 RE may improve by improving leg spring stiffness (LSS).

Because LSS is essentially a measure of elastic recoil, it represents “speed” with no additional metabolic cost - no oxygen is utilized in the elastic recoil process.  Building LSS is “free speed”, which translates into improved Running Economy (greater speed without greater oxygen utilization), and is likely reflected in improved Running Effectiveness (RE).

For comparison purposes, it is best to normalize LSS by weight.   Thus LSS/kg allows comparison and stratification.  Based on data that I have evaluated, LSS/kg stratification may fit as follows:

LSS may respond to interventions such as:

A sample program is listed here.

RE may improve by improving horizontal power ratio (HPR).

The higher the HPR, the more effective the athlete is at directing gross external power (Stryd power) horizontally.  For example, if two athletes were each to run 5000m at an average of 300W, and one had an HPR of 77% and the other at 80%, all other things being equal, the runner with the HPR of 80% goes faster, since more of that athlete’s 300W are directed horizontally.

HPR is variable between athletes.  Also, within a given athlete, HPR typically increases with speed.  It is best to compare athletes (and for that matter, a given athlete over time) by noting their HPR at a fixed intensity.  For example, HPR @ FTP, or HPR in 5k races, or HPR in 10k races, etc).

Therefore, at FTP, on relatively flat terrain, in good running conditions, it is likely that (approximately):

HPR = >80% is likely the realm of elite world class runners

(Again, the greater the value of HPR, the more “effective” the runner is at directing external power horizontally.)

HPR may respond to interventions such as:

Figure 6. RE versus TSB

In both cases one can see a modest positive correlation of RE with increasing TSB.

Hypothetically, it could be that RE may also correlate with sleep or HRV in a subtle fashion as well.

In the end, improvements in RE are harder to come by than improving power.  Nevertheless, improvement of RE offers an additional pathway to improving speed.  The extent to which a coach or runner pursues those gains may be guided by, among other things, the runner’s baseline RE and available training time - in other words, an assessment of return on investment.

Other uses of RE

1) Predicting time from anticipated power and RE.

If power (in W/kg) and RE can be reasonably estimated, then speed can be predicted.  Speed = RE * (W/kg)

For example, one might be able to reasonably accurately predict a target power for a given distance/duration, based on functional threshold power (FTP), performance in key workouts, the WKO4 power duration model, and/or the modified Riegel formula (Riegel 1981, George 2017, George 2017).

Similarly, RE can be estimated, based on RE in prior races, key workouts, WKO4 modelling in which RE is normalized to intensity and FTP time to exhaustion, and perhaps even the modified Riegel formula.  It helps that on flat terrain, RE is reasonably consistent for durations of 20 minutes to perhaps 2 hours, with perhaps no more than 0.02 spread over those durations.

An example would be estimating a projected half marathon time.  It might be that a power target of 280-285W is possible for a given runner.  It is also known that the runner will likely run the race with an estimated RE of 1.00 to 1.01.  The runner weighs 67kg.

Upon embarking on a training program for a given race, one might be interested in looking into the the power that will be need to meet a goal time for the race.  To do so, one must have a reasonable estimate of the athlete’s RE for the given course and distance.  Then, one must arrange the RE formula to:

For example, an athlete says “I’d like to break 3:00 for the marathon”.  A 3:00 marathon is run at a speed of approximately 3.91 meters per second.  Then one must estimate the runner’s RE for a marathon and for the course, based on RE in prior races, key workouts, WKO4 modelling in which RE is normalized to intensity and FTP time to exhaustion, and perhaps even the modified Riegel formula.

Of course, the 3.95 W/kg can be used to calculate actual target power by multiplying by the runner’s weight in kilograms.  Assuming a weight of 70kg in this example, the target power would be 276.5 W.   Planning further, if the runner has a kilogram to shed, and they can train down to race weight of 69kg, the necessary power for the 3:00 marathon would become 272.6 W.

One could go a step further, and by using the modified Riegel formula, calculate the requisite FTP/CP from the requisite marathon target power.

RE can be used, in part, to stratify potential across athletes.  In order to make proper comparisons, RE should be standardized to RE @ FTP and on flat terrain.  With those caveats, runners can be reasonably compared.  A relatively higher RE may represent a higher potential for fast race times, if power is properly developed.

By carefully comparing repeated alternating bouts of running in different shoes, a runner might gain insight into which shoe produces a higher RE.  These bouts should be on a treadmill, where speed is controlled.  Alternatively, if varying speed is used, or if tested over ground, then regression analysis of the data for each shoe is necessary.  Even under ideal circumstances, it is possible that small differences may be masked by measurement and protocol errors.

Running Effectiveness (RE) is one of the most important metrics to be developed for the analysis of data from a running powermeter.  The metric holds the key to understanding the relative relationship between running speed and running power.  Further accentuating the impact of this metric, is that it produces this information - the “effectiveness” with which the runner convert external power into speed - from data collected in the field.  Although not easily responsive to intervention, Running Effectiveness is, nevertheless, an actionable metric.  Lastly, besides offering an actionable metric that reflects an athlete’s “effectiveness” at converting external power into speed, the metric has expanded potential within prediction models and other alternative uses.  In the end, the metric should be followed by coaches and athletes as closely as power itself.  That it is not, at this time, routinely calculated on most analysis platforms (WKO4 being an exception) should not deter the coach or athlete from following this metric through alternative workflows, or from requesting the metric be provided to them on the platform of their choice.

How do I find my Running Effectiveness?