Margin debt levels are often cited these days to argue that there is excessive speculation in equities and that therefore caution is warranted. However, there is little evidence that the nominal amount of margin debt is in any way a predictor of future market performance. In reality, for the most part, margin debt simple grows and shrinks with the value of the stock market. As the market makes new highs, nominal margin debt levels also make new highs.

Historically, what has been far more informative for gauging whether there is excessive speculation is when there has been a divergence between the rate of change in margin debt and the rate of change of the stock prices. Specifically, during many past major market peaks, the margin growth rate (as measured by the 12-month rate of change(ROC)) has greatly exceeded the $SPX 12-month ROC. This can be seen in the following chart: 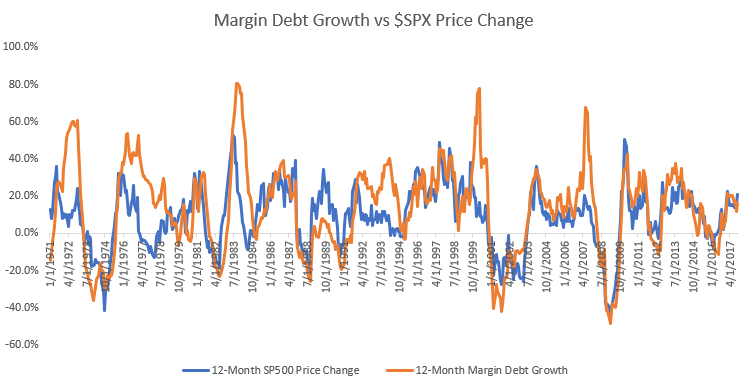 Such divergences took place in 1972, 1999 and 2007, all of which preceded major bear markets.  Now, let us look at today.  Up to October 2017, margin debt has been growing at the same pace as the $SPX.  Based on this, one could argue that there is little in the way of excessive speculation today, at least as measured by margin debt.  This will be something to watch as the bull market continues.