International parliaments as a diplomatic backdoor

The emergence of international parliamentary institutions is no substitute for diplomacy

The creation of parliamentary bodies in IOs is a significant development in the organization of international relations. It tells how IOs try to gain legitimacy by incorporating institutional formats widely identified with democracy. International parliaments also hold potential to become useful checks to the interests of governments and to monitor their commitments. The long evolution of the European Parliament has showcased how these institutions can break the monopoly of executives in international politics and be consequential for IO’s outputs. However, in this piece I argue that practitioners would be ill-advised to overestimate the importance of IPIs. In their current configuration, IPIs have been —so far— an ineffective tool to control or influence the policies of international organizations, and an ignored, dispensable fora for foreign policy decision-makers.

THE RISE AND STALL OF INTERNATIONAL PARLIAMENTARY INSTITUTIONS

The creation of parliamentary bodies in international organizations is not a recent phenomenon. It started with the first generation of IOs in post-war Europe, the Consultative Assembly of the Council of Europe in 1949 and parliamentary organs of the NATO and the European Union. From the early 1980s to the first half of the 2000s international parliaments became ubiquitous to nearly all processes of regional integration in Asia, Africa and Latin America. Though new IPIs stopped appearing in 2005. Nowadays, virtually every country participates in at least one of them and around 40% of the most important IOs have a parliamentary component. These parliaments join the dozens of interparliamentary networks not related to IOs, forums, and other associations connecting members of parliaments from around the world.

After their adoption in Europe, organizations elsewhere started creating parliaments of their own. These often had an authoritarian membership, but the image of legitimacy that parliaments project encouraged IOs everywhere to set up their own. Today, the average share of democracies in organizations without IPIs is higher than in IOs with them. 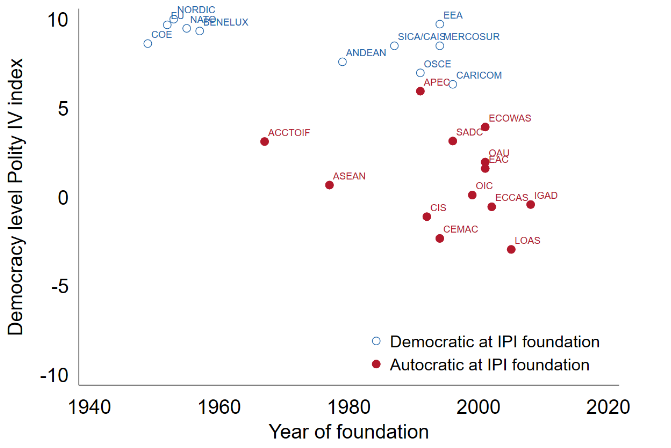 Year of foundation of International Parliamentary Institutions and average level of democracy in their International Organizations.

When international parliaments hold debate policy recommendations, the dynamics between their members are not too distant from intergovernmental negotiations of government representatives. There is a substantive political debate that confronts or allies interests. For instance, the wars that Russia waged against Georgia and Ukraine in the last years had their expression in the Parliamentary Assembly of the OSCE, with members retreating from sessions and the invaded countries voicing their outrage. Similarly, it is not without reason that the Parliamentary Assembly of NATO was held in Georgia recently and will take place in Ukraine in 2020. In Latin America, recent crisis have also been played in the region’s IPIs. Venezuela cancelled direct elections to the Latin American Parliament and has been suspended from Mercosur, the regional integration scheme.

And even though there is real politics in IPIs, they can hardly be a backdoor to diplomacy because in most cases IO decisions or national controversies are debated ex-post rather than developed. There are two reasons for this. The first is that international parliaments suffer from the same disadvantages that national parliaments have in foreign policy: an insurmountable information gap vis-à-vis governments. The second is that IPIs are not designed to have access to policy-making to begin with.

Admittedly, the word of IPIs is diverse. From directly elected institutions providing recommendations to inactive or abandoned parliaments in Sub-Saharan organizations. But out the 26 IOs that have created a parliamentary body in the last 40 years, only 8 endowed them with enough capacities to exercise a degree of leverage over their own decisions. In this sense, the European Parliament is an extreme outlier in the distribution of IPI’s capacities. 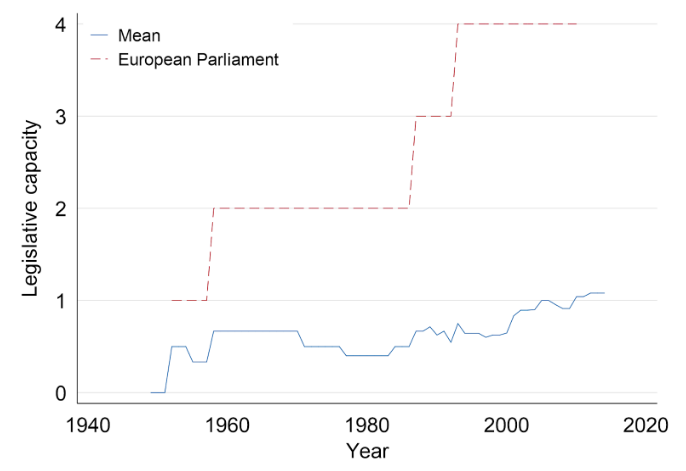 From a Catalan perspective, there has been a misreading of the international weight of IPIs. The inability to access decision-making bodies as full-fledged members has encouraged Catalan representatives to make use of the only international floor they had available. Notwithstanding the communication efforts that the former cabinet undertook, Catalan MPs selected from the Spanish parliament as members of IPIs were the only voices in international fora. This access has concentrated too many inefficient efforts to bring the Catalan case to the international public opinions.

After October 2017 the Parliamentary Assembly of the Council of Europe (PACE) agreed to a debate on the Catalan referendum, but without a final vote on it. This is far from a detail. The collegial nature of parliamentary positions is what sets them apart from intergovernmental resolutions and gives them normative weight. This debate added to similar speeches in the OSCE Parliamentary Assembly and the Parliamentary Assembly of La Francophonie. The Catalan parliament made a considerable effort to become a member of the the French-Speaking IPI (not the international organization) in 2008. In July last year, the now-imprisoned speaker of the Catalan parliament exposed her political persecution to the members, which the current speaker has continued to do, to no real effect and negligible media repercussion.

In the European Parliament, the only IPI with a reasonable chance to set a political agenda, repeated questions and debate petitions have also gone largely unnoticed, despite a strong lobbying effort by Catalan —and Spanish— representatives. Just like in the Russian wars, these debates are a display of antagonistic positions between the sides in conflict, showcased in a parliamentary arena but dealt with elsewhere. In the design of foreign policy, it is important to know when such public displays are useful, when it is necessary to perhaps generate debates or journalistic consensus that favor your interests. It is equally necessary, however, to understand the limited benefits that publicity attains, in a conflict that is characterized by extreme power asymmetry.

Amidst the current international political environment, in which multilateralism is questioned and disintegration creeps into academia as a defining feature of the next decade, investing lobbying efforts in international parliaments is likely to lead to a dead end in influence and public repercussion. IPIs do not have, perhaps with the exception of the European Parliament, the legal capacity or political tools to influence those directing foreign policy. Not even in democratic IOs, where opinions of representatives are supposed to be taken into account. IPIs have, however, the potential to reinvent themselves and become a true diplomatic backdoor.

To know more about why international organizations create parliaments see: The Rise of International Parliamentary Institutions: Authority and Legitimacy. The Review of International Organizations  DOI: 10.1007/s11558-018-9326-3 The ETH Zurich and the Swiss National Science Foundation (SNF) financed the data collection for this project.