In our third year conducting nationwide rapid research into the schedules of members of Congress--and encouraging Americans everywhere to show up and speak out to their elected officials--Town Hall Project is happy to share our most comprehensive data set yet. 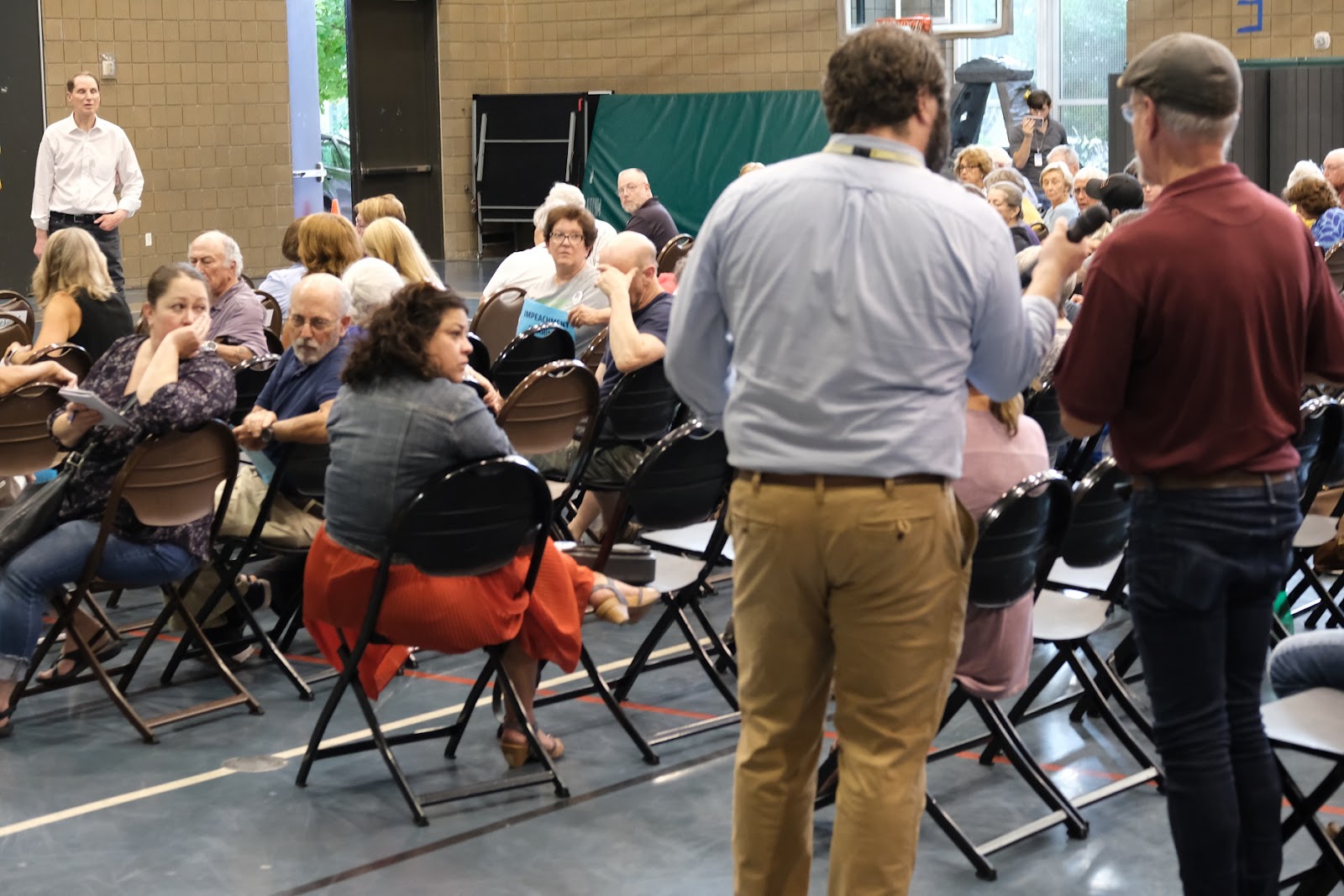 After a steep decline in 2018, in part fueled by a large number of Republican members of Congress who ceased to hold town halls entirely after the often-contentious public meetings during the attempt to repeal the Affordable Care Act in 2017, we are heartened to see a clear positive trendline in town halls being held by members of Congress.

Encouragingly, town halls are up among both parties, even with Republicans losing a substantial number of seats in the House since 2018.

While far too many members of Congress remain “missing” and inaccessible to the people they work for, we applaud a growing group of members for this positive 2019 trend and encourage Americans across the political spectrum to continue to demand more of the people we have elected to represent us.

A particularly heartening development is the substantial upswing in town hall and other public engagement events by freshman members of the 116th Congress.

Freshmen were responsible for more than a third of the total town halls held by members of this Congress, despite making up less than 19% of Congress.

The disparity is even more dramatic when broken down by party. 100% of Democratic freshmen members have held at least one town hall event vs. just 61% of Congress as a whole (and 58% of Republican freshmen in this Congress).

The Democratic freshman class in the House, in particular, pride themselves on being available to their constituents, especially after many of them made lawmaker accessibility a prominent issue in their 2018 challenger campaigns.

At the end of their first 100 days, freshman leaders Rep. Joe Neguse (CO-02), Rep. Katie Hill (CA-25), and Rep. Haley Stevens (MI-11) took to the House floor to celebrate the historic efforts at accessibility by this freshman class. And Town Hall Project’s executive director recently sat down with Rep. Neguse to discuss why he believes this freshman class is setting a new standard for Congress in the years to come.

We hope this enthusiasm for accessibility rubs off on their peers in Congress, and those seeking the office in 2020. Town hall accessibility is good governance and good politics.

*Including King and Sanders, Independents who caucus with Senate Democrats.

Unsurprisingly, some of the members holding town halls at the highest rate, are those who recently upset incumbents in 2018, and are likely to face serious challenges of their own in 2020.

Additionally, a significant percentage of freshmen who frequently hold town halls took Town Hall Project’s Town Hall Pledge in 2018, a commitment to their constituents to hold a minimum of four town halls per year.

While Democrats on the whole hold town halls at a substantially higher rate, the leading town hall holders in both the House and Senate are Republicans.

2019 also saw the trend of Republicans members of Congress who had previously been “Missing Members,” (those not holding a single town hall event during the 115th Congress) holding their first town halls in years, some of them, like Rep. Steve King (IA-04) and Steve Chabot (OH-01), at great frequency.

In most of these cases, their challengers took the Town Hall Pledge and each made town hall accessibility prominent issues in their campaigns. Despite falling short at the ballot box, it’s clear these challengers spurred the victorious incumbents to take accessibility to their constituents much more seriously this year.

We hope these “Missing Members” consider that the culture of expectations of town hall accessibility is only going to grow since the last election, and they will find themselves facing tough questions on why they aren’t taking the time to meet with the people they work for.

A far smaller percentage of senators--of both parties--hold town halls when compared to their colleagues in the House, and the senators up for re-election in 2020 are no exception.

In bold: races expected to be competitive.

The “Town Hall Pledge” program has been a thrilling success. We have seen over 300 candidates take the Pledge to their constituents--including 39 members of the 116th Congress, as well as state legislators, and other elected officials--including Chicago Mayor Lori Lightfoot. 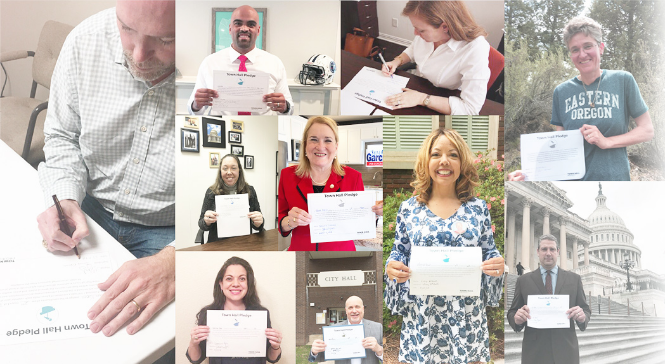 Pledgers in Congress have held 482 town halls so far, a rate that far outpaces the average members of Congress (12.4 town halls per pledger vs. 4.4 per non-pledger).

While we understand members of Congress in leadership have additional duties that often keep them in Washington D.C. longer, or require them to make additional travel to other parts of the country, there is still no justification for holding zero public dialogues with their own constituents in all of 2019. If anything, members in leadership should set an example for the rest of Congress, not lag behind.

HALFWAY OUT THE DOOR

This is expected but still disappointing. These members continue to represent their districts and states, and continue to draw a salary from taxpayers. By ignoring this key part of their duties in their remaining months in office they do their taxpayers a disservice.

We would single out both Jim Sensenbrenner (WI-05) and Mike Conaway (TX-11) for praise for continuing to prioritize their constituents even after they’ve expressed their intention to retire.

We use the term “town hall” to refer to any public event held by a member of Congress in their official capacity that meets the following conditions:

-Be free and open to the public. (We discourage but grudgingly accept town halls that require RSVPs).

-Be announced with at least 24 hours’ notice.

-Be held within the lawmaker’s district (or, for a U.S. senator, state), or (in certain multi-district metro areas) be held within a 30 minute drive of their district.

-Be hosted by multiple lawmakers.

-Feature other speakers as long as the lawmaker is the primary speaker and is available to answer questions for at least 30 minutes.

Town Halls may not:

-Be limited to a specific segment of the lawmaker’s constituents (e.g. only Republicans, nurses, veterans, seniors, employees of a specific company). If restricted, this event fits in the Other category.

-Screen questions in any way.

-Be closed to the press.

We also reserve the right to disqualify events that are held in transparent bad faith or otherwise violate the understood purpose of these events--to foster an honest, open dialogue between constituents and their representatives.

The heart of Town Hall Project is our nationwide team of volunteer researchers who are assigned several members of Congress to research and report on throughout the week. Our volunteer research is supplemented by public event submissions, direct communication with congressional offices, digital tools to monitor social media, and staff verification to catch missed events and evaluate submissions.

To prepare for this report, our team conducted a full audit of our entire event database.

We are always improving the quality and comprehensiveness of our event data, so if we are missing events or there are other needed corrections to the record, we encourage you to contact us at info@townhallproject.com.

We use the New York Times definition of freshman members of Congress. For simplicity we categorize independents who caucus with Democrats (Sen. Angus King and Sen. Bernie Sanders) as Democrats in our analysis.

Town Hall Project is a project of the Sixteen Thirty Fund, a 501(c)4 public welfare organization.