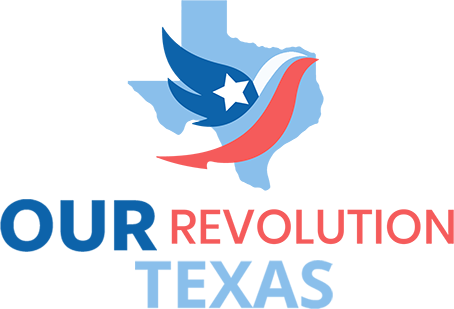 Every chapter, region, and the state must have an ESC to process endorsements. The relevant steering committee is responsible for determining the exact composition of their ESC. Every ESC is, however, required to have the following: a chair and at least 3 members.

Steps to a Great Endorsement 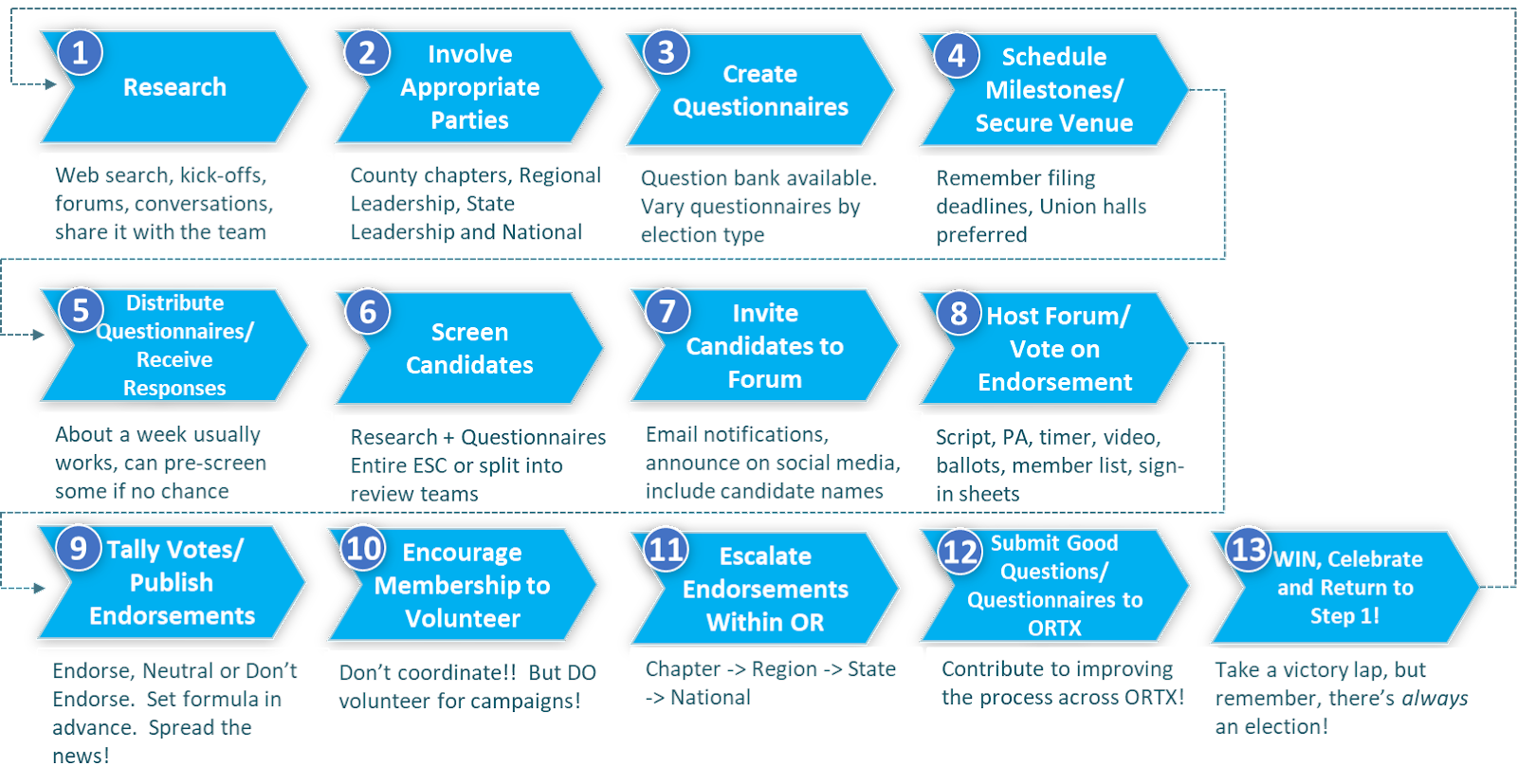 Quality research is critical for any good endorsement.  At a minimum, this should consist of:

The endorsement process can begin at any level, but general guidelines are:

Tip:  Depending on how big your chapter or region is, you may simply not have the resources to endorse in every race.  It's a lot of work.  If you encounter that situation, it's better to do a great job on a few critical races than to do a poor job on a lot of races.  People will usually understand if you can't cover them all.

ORTX does not dictate a specific format for endorsement questionnaires or the questions included in them.  Instead, a question bank is maintained at the State level which includes questions that have worked well in previous forums.  Any OR organization is free to use any questions they wish, with modifications as they see fit.  Just keep in mind that the quality of the vetting you do will influence your chances of obtaining an endorsement from higher levels of OR.  You should generally use different questionnaires for:

Good questionnaires are usually fifteen to thirty questions, enough to test the candidate on most major issues but not so many as to make answering them a herculean task.  You generally want to include Yes/No indicators for each question to avoid ambiguity, but also room for a paragraph where they can state their positions in their own words.  Candidates will sometimes say "Yes" to a question because they know that's what you want to hear, but then drop hints about areas where they are not completely progressive in their position statement, so it's good to make it clear in the instructions that you do expect some kind of statement.

Tip:  In Congressional races, if you can ask about specific bills that the candidate will support, it's a good way to nail them down on their positions.

First and foremost, OR is about issues, but a question or two about viability, e.g., GotV strategy, is often used just to make sure the candidate will be mounting a serious campaign.  A question on sources that the candidate will not be taking money from is also advisable.  Your instructions should mention that we reserve the right to share the questionnaire responses with the media should they ever go back on their positions.  Tip: Choose a format for the document that everyone will be able to open, e.g., a Google Docs document for each candidate, an Adobe Acrobat form (.pdf) that can be filled out and saved or a Microsoft Word file saved in the older (.doc) format.

This one is pretty self-explanatory.  The major milestones in the process should be listed with scheduled dates; you need a good schedule to avoid trying to do too much at the last minute.  Allow enough time for the candidates to create good responses to your questionnaire, but not so much that they will simply procrastinate and do it the night before the deadline―usually about a week works fine.

Tip: Schedule distribution of questionnaires for shortly after the filing deadline for the election.  Progressive candidates have been known to wait until just before the deadline to file, and you don't want to risk excluding the best candidate from the process.

If you will be conducting a forum or debate (recommended), you will need a venue.  Union halls are always preferable and may be cheaper for union allies.  If those are booked, not the right size or not in the right location, you can use other venues such as community centers or even restaurants with rooms for large parties.  The latter will sometimes give you the room free of charge if you will encourage attendees to purchase food at the event.

The choice of which candidates to send questionnaires to is up to you.  Often you will want to send them to anyone running as a Democrat, Green, Independent or other potentially progressive candidate, but it is fine to exclude candidates at this point if you have reliable research showing that they do not support our values and would have no chance of endorsement.  We want to be fair and equitable, but there's no reason to completely waste a candidate's time and our own.

Tip:  If you don't have an email address for the candidate, the Texas Secretary of State normally lists one with the candidate's filing record.

Ideally, everyone on the ESC should review all responses.  For large primaries in major metropolitan areas, there can be too many races to make this practical.  If so, you can split into review teams that each focus on one type of race, e.g., federal, state, judicial.  Remember to review all of your research on each candidate at the same time.  It is absolutely critical that you not simply take what a candidate says on a questionnaire at face value―these are politicians after all.  Look for differences in positions stated elsewhere, voting records, etc.

It is recommended that the ESC screen candidates out of the process that they are sure at this point should not receive an endorsement.  If such candidates are invited to continue, they will:

Tip:  At the same time that you invite your candidates, you should also graciously inform those that are not being invited and thank them for their participation.  Their time is extremely valuable, and we want candidates to feel good about participating.  Sometimes new candidates will learn from the process, come back and do better next time.

STEP 8:  Host the Forum and Vote on Endorsement

Forums are the preferred method for finalizing endorsements, but you should feel free to use other options if conditions on the ground require it.  Alternatives include:

There is no prescribed requirement for when or how voting should be done.  We have had successful forums where it took place immediately after the forum by those in attendance and others where it was done on a subsequent day.  Choices on the ballot that work well are Endorse, Neutral and Don't Endorse.  This is a good fit because it's possible that we may endorse multiple candidates or none at all, and having a Neutral option gives much more significance to the Endorse or Don't Endorse votes.  Remember that only OR members are allowed to vote, and others may show up at your forum.  Becoming members at the forum should not qualify someone to vote, since candidates may try to stack the vote that way, so it's a good idea to specify a cut-off date by which a candidate must be a member in order to vote.  If you want to check membership after the event is over, instead of at the door, you'll need to ask for people to put their names on the ballot.

Tip:  If you are going to require names on ballots, include a statement like "Only Our Revolution members may cast votes on endorsement.  Names are required for validating membership."

If you choose to do a forum, there are several things you will need in addition to the venue:

Tip:  For some candidates the exposure they receive at your forum will be as important as the endorsement itself, which means giving equal time is important for fairness.  That means that even if your question targets only one candidate, the others should have equal time to comment on the topic.  For the same reason, ad-hoc follow-up questions from the moderator should be avoided when possible and limited to demands for a yes/no answer or to indicate a misstatement of fact for the audience.

Once membership in OR has been validated, the votes can be counted.  This can be done immediately following the forum if you validated membership on sign-in, or it can be done in a separate meeting following the event.  Simply total the Endorse, Neutral and Don't Endorse votes for each candidate.  You should already have determined the formula you will use that indicates success.  Normally, we want the OR endorsement to be quite difficult to get, but you should use your own judgment based on how confident you are in the candidates.  Formulas that have worked well in the past include:

Now is the time to start helping your candidates win!  Once you've made your selections, prepare a nice graphic to announce your choice on social media, post it and encourage everyone you know to share it around.  Send an official announcement to the participating candidates, and also send announcements to neutral or progressive media.  Ballotpedia includes endorsements in candidate profiles and will want to know about it, for example.

STEP 10:  Encourage the Membership to Volunteer for Campaigns

Since Our Revolution is a 501(c)(4), we cannot coordinate with campaigns, but that doesn't mean we can't help.  You should encourage your membership to choose one or more campaigns that they feel are most important to them and volunteer.  Especially in local races, one additional block walker, phone banker or donor can make a big difference.  The campaigns will let them know how they can help the most.  Additionally, we can use our own tools, like Action Network and the Bernie Dialer to mobilize our own members during the campaign and the election and help get out the vote.

STEP 11:  Escalate the Endorsements Within OR

When a chapter feels that an endorsed candidate is strong enough, they should escalate it to the Regional level:

STEP 12:  Submit questionnaires or questions that worked well to ORTX

Every time any OR organization goes through a successful endorsement process, we have an opportunity for everyone to benefit.  If you came up with a new question or format that worked well for your endorsements, we want to capture that centrally so we can reuse it.  Please send the question or document to ORTX leadership.

STEP 13:  WIN the Elections, Celebrate and Return to Step 1!!

Go out and work hard for your endorsed candidates!  Crush their opponents!  Send a message to the world that Our Revolution is a force to be reckoned with, that we will no longer accept candidates that don't walk the progressive talk, and help change the political landscape of America!  Once you've done that, don't forget to celebrate your success―have a little party and pat each other on the back, but don't take too long.

Tip: All elections are important, and there's always an election!

Finally, once the endorsements have been made and your candidate is in office, don't forget to hold your candidates accountable.  If we endorse a candidate, and they fail to uphold the positions they stated during their campaign, put them on the top of your list to primary the next time around.  Vote to publicly withdraw your endorsement and inform the media.  Feel free to include the candidate's endorsement questionnaire to help explain how they let us down.  Hopefully, you won't need to do that too often, since there are plenty of great progressive candidates out there!