The price of Spanish unity

Last October saw the territorial integrity of Spain questioned more than it has been since the end of the Spanish empire. The economic and political threat dwarfed the costs of any crisis prior, including the late African decolonization. Yet one year after the Catalan government organized a self-determination referendum, the international standing of Spain seems undamaged. What was the price of unity?

The Catalan pro-independence movement has highlighted that the repression of the vote on October 1st and, shortly after, the ousting of the elected government came at a cost. All exercise of power that is perceived as illegitimate taxes the rulers, economically or otherwise. Financially, the costs of preventing Catalan independence are at only a few hundred million euros. Besides the €87M admitted last year, they include a sustained diplomatic and policing effort since at least 2012, when the Catalan administration stepped up its own efforts to reach the international public opinion.

However, immediate financial costs constitute only a minor part of the toll. Analysts often place gains and losses in other areas; specifically, the position of the state in International Organizations (IOs), its international commitments, its geopolitical gravity and its attractiveness for both investors and public opinions. Despite the many examples of international ridicule spurred by the Spanish government – most notably the failure to extradite exiled politicians – the international position of Spain in all of these areas is virtually unchanged. This position is defined to a great extent by its participation in the two most consequential European IOs: the EU and NATO.

In the European Union, it is difficult to quantify how many concessions Spain has made behind the scenes in order to keep the room quiet regarding its internal affairs. Negotiations in Brussels during the preparatory stages of legislation have been notoriously under-covered. We know, however, that no country publicly used Spain’s constitutional crisis to weaken its position in the European Council. At the height of the crisis in October 2017, many expected a reaction from the Council – the main political organ of the EU. Some commentators have written that Spanish representatives justified themselves during the European Council last October (17th), but the official outcomes and press releases of the Council and the informal meeting of heads of state the same month completely omitted the question. 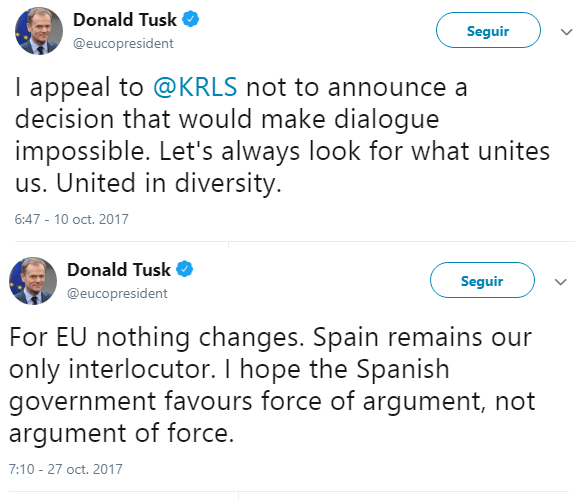 The only official reaction from the EU institutions was a press release from the European Commission on October 2nd, which aligned with Spanish interests and delivered a critical blow to the Catalans, who were expecting international mediation. In the current European Parliament, non-Spanish MPs have raised only seven questions on the issue. Spain has been, overall, successful in maintaining a common position in its most important international venue.

There are two reasons for this success. First, the great powers of the European Union know that tolerating any level of repression to Catalans is the less expensive solution. Either of the alternatives – supporting mediation or even favoring secession – implies facing large-scale problems.

To begin with, a market storm over Spanish bonds and the resulting default threat. Spain is aware that it is too big to fail, and it plays with the reassurance of knowing that the financial instability resulting from such a situation would harm all European governments. In this case, the unity of Spain was the lowest cost outcome for everyone except the Catalans. A weak Spain creates far more problems for the biggest economies that would be offset by the contributions of a new independent state.

Besides immediate financial stability, constituting Catalonia as a party in an international mediation is a large-scale geopolitical shift. This is often considered from the viewpoint of the EU institutions, but the complexities that the EU would have to tackle to expel or incorporate Catalonia are known and attainable. In essence, they are what the EU has experienced with every enlargement and what will go through with Brexit. The political issue goes beyond the interests of the EU lenders. The control of Catalonia is part of the fundamental geopolitical equilibrium that France and Spain have maintained since the peace of the Pyrenees in 1659, only interrupted by the Napoleonic wars. This redrawing of the limits of the Spanish empire constitutes nowadays one of the oldest borders in the continent.

The second and more important reason for Spain’s success is that political leaders with standing in Brussels believe the use of force to stop secession is legitimate. It does not run contrary to European values or constitute a threat to the Union. One element of this ideological position originates in the intellectual confusion that states that European integration can only be built with progressively larger units: that is, fewer and larger states increase European unity, and a greater number of smaller units lead to geopolitical disintegration. The belief in this idea explains, in part, how pro-integration members of the Brussels establishment such as Guy Verhofstadt have aligned themselves with the Spanish narrative.

Another argument for the legitimation of violence argues that secession is on the agenda of Russian-backed destabilization, and hence should be countered at all costs. This is a message that the Spanish media and diplomatic channels have spread since the concept of Russian meddling entered the EU public discourse in 2016. In contrast with the crisis of mistrust that some central European governments have generated in 2017-18, the Catalan crisis does not threaten the political unity of the EU. Catalan political leaders have distanced themselves from the rhetoric of parties such as Fidesz and Law and Justice: more importantly, however, allowing Spanish repression reinforces the negotiating position of other countries. The best example of this has taken place in the other pillar of Spain’s international position: NATO.

Investigative journalism has traced how the Spanish participation in the Baltic Air Policing mission of the Alliance relates to the silence of the Baltic governments on the Catalan crisis. This has allowed Spain to assume an unprecedented role in Eastern Europe; the most significant cost recorded to date – although some may also include the readiness of the Rajoy government to assure the goal of 2% for defense set by NATO. These are, however, negligibly small costs: neither commitment faced internal contestation and only reinforced the position of Spain in the political spaces in which it aims to be present.

Besides the politics of IOs, the international standing of a state is associated with its reputation. The Spanish government does not have a dedicated soft power approach because it has continually confused soft power with place branding: thus, measuring costs in terms of soft power would not be accurate. However, like all states, Spain is aware of the value of attractiveness. In this dimension, avoiding secession was pricier than in high politics, but also had relatively minor costs. Spain has endured a series of defeats in the realm of public diplomacy and international law. Amongst these, the badly received efforts of many diplomatic missions to veto or coerce public talks of Catalan politicians abroad, the cases opened at the UNHRC and the failure to extradite political exiles. Although these have had salience amongst educated public spheres, their specificities have rapidly disappeared from the media landscape.

Whatever the reputational cost amongst Europe’s elite, these costs seem short-termed. Crucially, Spain has not suffered in international democracy indexes or lost in direct foreign investment (including tourism). The last widely used democracy index published this year, the V-Dem 2018, registers a slight decrease in the freedom of expression over the last two years, Spain has retained its position within the democratic league. International indexes of democracy hardly measure non-formalised respect for minorities, but the foreign policy communities continue to hold them as standards. In turn, foreign investment has clearly ignored the crisis. Although there was a low peak in October 2017, the recovery has been fast. Tourists, of course, have not sensed major differences. The data suggest that Madrid’s worries on investment holds were a political strategy.

One year from the Catalan referendum, Spain has maintained unity at a negligible price. Its position amongst Western democracies contrasts with countries sustaining high international costs for their internal politics, for instance, in Central Europe. Nothing in the publicly available information suggests that the price of territorial integrity would have been higher had Spain used higher levels of violence or other coercion. After the fact, the main powers of Europe and the government in Madrid can extract valuable lessons. The first can be sure that the lack of intervention equals lack of consequences, and that, were the Catalans to try again in the future, they can safely ignore it. The second can learn an enduring principle of international politics: repression and violence are always an internal affair as long as they do not run contrary to the interests of others.