The major disease threats to apples have largely wrapped up for this year. Either there’s scab, possibly some fire blight strikes, in an orchard, or there isn’t.

That leaves problems that do not kill trees, but can damage fruit. There have been increasing problems with summer rots, mostly black rot and bitter rot, in recent years, but they haven’t reached the point that they’re a problem every year. The blemish disease with the complicated name, sooty blotch/flyspeck, can be a problem if it’s ignored. Today I’ll cover managing sooty blotch/flyspeck, and to keep it simple, just go with calling it SBFS. 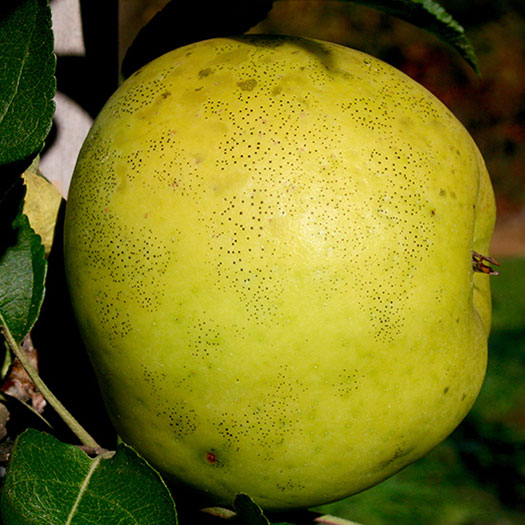 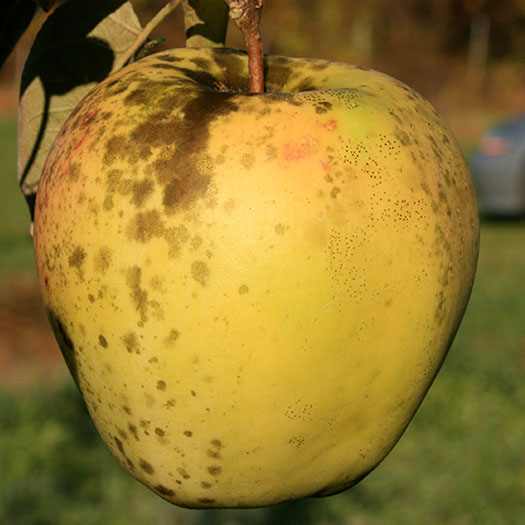 SBFS is a bigger problem on light-skinned varieties, because it’s easier to see. These apples both have a mix of flyspeck and sooty blotch.

SBFS is caused by many different fungi, some more common than others. Different apple regions have different predominant species, so management methods can vary from place to place. For example, the fungi that cause most SBFS in New England are not the same as those that cause problems in the Southeast. In Europe, the disease is called simply sooty blotch because flyspeck fungi are relatively unimportant.

In New England, spores first develop around the time of apple bloom, but apples are protected by scab fungicides, and the tiny hairs on the surface of new fruitlets. However, when scab fungicides are stopped and apple skin becomes smooth, SBFS fungi can start to grow on apples. At first, the growth is invisible. It takes some time for SBFS fungi to establish, grow and darken, producing the visible, dark smudges and spots that lower fruit value.

Commercial fungicides applied every two to three weeks will control SBFS. If an insecticide needs to go on, then it’s probably a good idea to add an inexpensive fungicide for SBFS. Half the maximum rate of captan will generally last 2 weeks or 1.5 inches of rain, whichever comes first.

This protection can be boosted by adding one of the following fungicides:

> a strobilurine fungicide such as Flint, Flint Extra, or Sovran;

> a strobilurine combination product such as Pristine, Merivon and Luna Sensation;

These will last 3 weeks or 2 inches of rain. I recommend a mix with a half-rate of captan to reduce chances of resistance development and help protection. By the way, adding fungicides to a calcium spray will also help manage SBFS. For example, calcium chloride plus captan is more effective than captan alone.

I also recommend using single ingredients and mixing them yourself, with one exception. In my opinion, using a pre-mix of a strobilurin plus and SDHI in Merivon and Luna Sensation for SBFS wastes the SDHI. Pristine is an exception, as the strobilurine in the mix, pyraclostrobin, is uniquely effective against SBFS. It’s an ideal material to use late in the season to maximize protection before harvest.

But what if you don’t need to apply an insecticide or calcium? Should you put on a specific SBFS spray?

This depends to a large degree on the weather, specifically whether it has been dry or wet. SBFS fungi require very high humidy, over 95%, and better yet, from the fungi’s point of view, wet fruit. If weather is dry, SBFS fungi shut down and don’t grow until it gets wet again.

The best estimate is that humidity has to be over 95% and fruit have to be wet for about 175 hrs. for SBFS to grow from a new infection to black smudges and dots. Up to that point, fungicides can be used to kill them, or at least stop their development. That means if weather is dry, or fungicides have been put on during June and early July, SBFS fungi haven’t grown much up to this point.

But this week we have tropical weather, ideal for SBFS growth. It’s time to make sure SBFS doesn’t get out of hand, even if you don’t need to spray something else as well. The simplest way to do this to keep track of fungicide application dates and rainfall following the application. Basically, fungicide protection breaks down over time because fungicides are exposed to sun and oxidation, washed from a plant’s surface, or fail don’t cover new growth. When the fungicide efficacy has worn out, apply the next one. Use the SBFS Fungicide Depletion Table below. 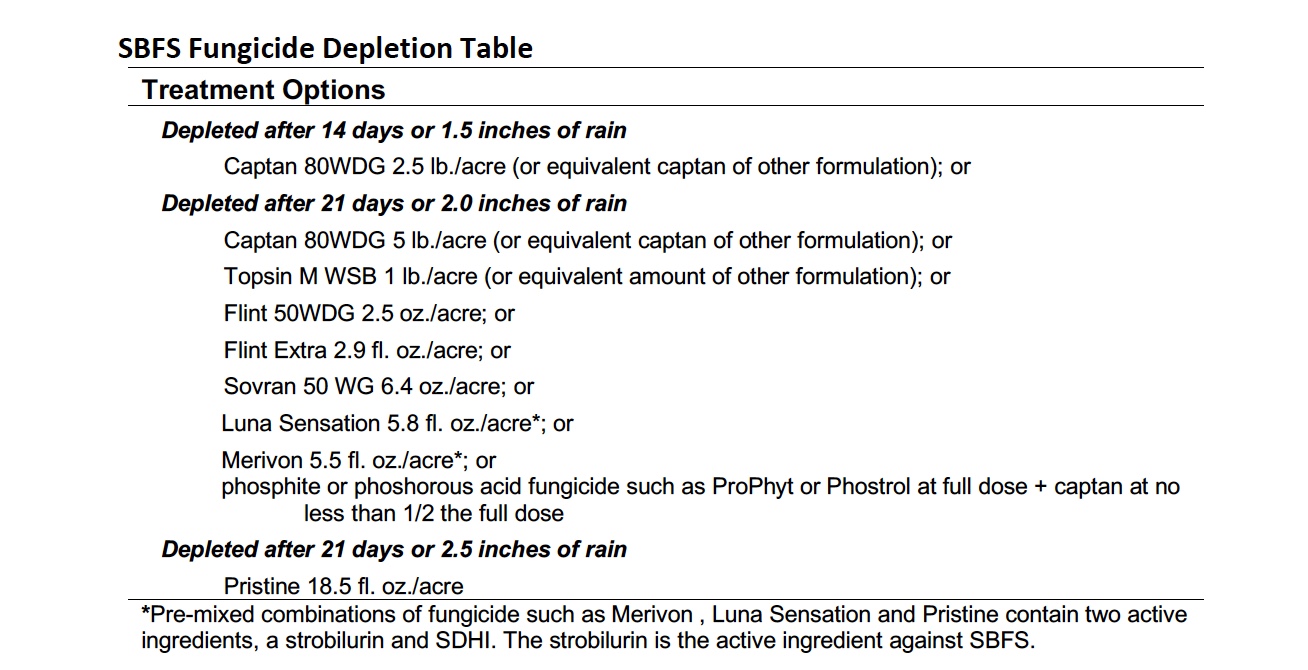 NEWA, AgRadar and RIMpro have each included models to evaluate SBFS risk. Primarily these keep track of wetting hours or high humidity from some biofix date, either petal fall or 10 to 14 days after. They may, or may not, save a fungicide or three during June. AgRadar gives the most detail in terms of fungicide depletion, with options for different fungicides. NEWA uses a worst case, that is, fungicides last for 14 days or 1.5 inches of rain. RIMpro does not incorporate fungicide applications in its model.

This year at the UMass Cold Spring Orchard, we had petal fall on McIntosh on about May 20. NEWA shows the first “Moderate” risk of SBFS on June 14. This tells growers to check the five-day forecast; a cover application should be made if two or more days with precipitation are predicted. At CSO, rain is predicted, so an application would be made. According to NEWA, this keeps risk “Low” for the next 10 days, until June 25. On the 25th, more rain is predicted over the next 5 days, so another fungicide is applied. That only protects 2 days, thanks to rain wash off. So another fungicide is applied on the 28th. That lasts until July 16, about two and a half weeks. Then heavy rain triggers the next application. That is predicted to last through tomorrow, July 25.

AgRadar has a similar schedule for the fungicides with both the least protection, basically captan alone, and those with more protection, the strobilurins and Topsin. So, applications June 17, June 25, June 29 and July 18.

As usual, RIMpro is different because it assumes that in Europe in conventional orchards there isn’t any sooty blotch problem (flyspeck is apparently not an issue). Conventional fungicides used against scab and other diseases control it. The model is built for organic orchards. Still, it uses Marc Trapman’s approach to presenting risk in graphs, and he draws on data generated in the US as well as in Europe.

For CSO, the first risk of infection doesn’t hit until June 28. At that point, without fungicides, the fungi would start to grow, unseen. Because there’s no fungicide eradiction or protection element built in, we need to make some guesses. But if a captan plus Topsin application were made on June 27 or 29, it is reasonable to assume it would stop that infection. RIMpro doesn’t show another infection until today, July 24. Again, a captan + Topsin or captan + strobilurin would deal with that. I expect that the model won’t show us accurate dates for the first appearance of SBFS on fruit, but it may be useful in timing fungicides. However, that needs to be looked at for a couple of years! It may not work in the US. 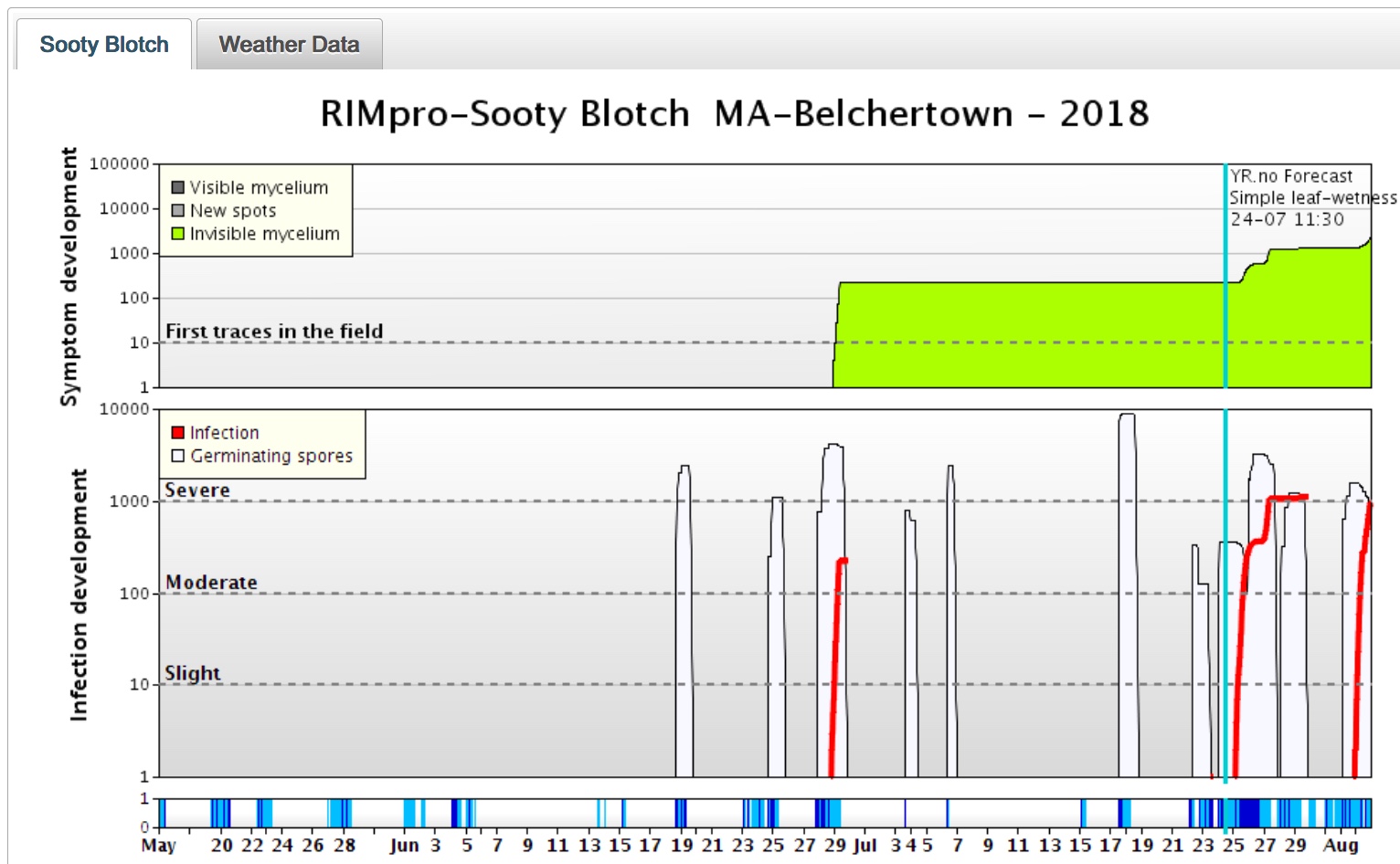 Output from RIMpro for sooty blotch risk at CSO, 2018.

The bottom line: I think NEWA and AgRadar tend to overestimate risk, and so recommend more sprays than needed. Three fungicides, preferably captan plus another fungicide, one in mid-June, another at the end of the month, and a third in mid-July timed just after rain events should be sufficient for this year so far. A word of caution, though: if the tropical showers and high humidity stay with us, it will be important to maintain fungicide protection.

The next Healthy Fruit will be published on or about July 31, 2018. In the meantime, feel free to contact any of the UMass Fruit Team if you have any fruit-related production questions.