Note: for 2018, we have ten Massachusetts orchard locations subscribed to AR: Amherst, Belchertown (2 locations), Brookfield, Deerfield, Easthampton, Groton, Leominster, Northboro, and Westhampton. The website for looking at AgRadar for these locations is: http://extension.umaine.edu/ipm/ag-radar-apple-sites/. What follows is the AgRadar summary for the Belchertown location.

ObliqueBanded Leafroller (OBLR) -- 1st generation OBLR flight begins around June 7, Thursday. Where waiting to sample late instar OBLR larvae is not an option (= where OBLR is known to be a problem, and will be managed with insecticide against young larvae): Early egg hatch and optimum date for initial application of B.t., Delegate, Proclaim, Intrepid, Rimon, Altacor, Belt, pyrethroid or other insecticide effective against OBLR (with follow-up applications as needed):  June 22,  Friday. Where waiting to sample late instar OBLR larvae to determine need for treatment is an option, or to check on results from earlier sprays: Optimum sample date for late instar summer generation OBLR larvae: July 2,  Monday. If first OBLR late instar larvae sample is below threshold, date for confirmation follow-up: July 6,  Friday.

Preliminary McIntosh Harvest Date Forecasts -- Date to apply ReTain to delay first harvest for apples which without treatment would be ready for storage harvest on September 6 is from
Thursday August 9  to  August 16. Date to apply ReTain to delay maturity for 2nd, 3rd or 4th pick of those apples, without delaying start of harvest maturity, is from Thursday, August 23  to  August 30. Begin measuring actual McIntosh starch-iodine index no later than  Saturday, August 18. The Michigan formula estimates that non-spur McIntosh will reach starch index 4.0 and start the optimum harvest window for long term storage on Thursday, September 6. Using the Champlain Valley NY formula from Cornell Bulletin 221 ‘Predicting Harvest Date Windows for Apples,’ McIntosh maturity is forecast to reach starch index 6.0 in Belchertown-ColdSpring MA on Saturday,  September 15. (Yup, we are already talking about harvest.)

I don’t have much to say this week except: Program information and pre-registration is here for the Massachusetts Fruit Growers’ Association Annual Summer Meeting in Belchertown on July 10. We have invited Dr. Srdjan Acimovic and Dr. Poliana Francescatto from Cornell! Between them and Dr. Jaime Pinero here at UMass we have diseases, insects, and horticulture well covered! Should be a great day, hope you plan on coming. You can sign-up any day now and pay for lunch/attendance using a credit card! Please don’t wait until the last minute so we can have the right amount of lunch here to fee you!

Insects become resistant to a pesticide by loss of sensitivity to poisoning, changes in their anatomy, behavior, or more rapid metabolism, resulting in insecticide detoxification.

In recent years, codling moth has become resistant to avermectins, benzoylureas, benzoylhydrazines, neonicotinoids, organophosphates, macrocyclic lactones, and pyrethroids. It is believed that this resistance is due to an increase in enzymatic activity of the larvae, leading to pesticide detoxification.

According to Cornell University, codling moth populations resistant to older insecticide classes, including pyrethroids and OP’s, can be found in orchards throughout the Northeast. The development of resistance by codling moth to Imidan is likely if its reoccurring use has been for plum curculio and/or OBLR management during mid-summer. Those specific timings would provide some level of control of codling moth while providing various rates of residual exposure. Low rates of insecticide residue increase the selection for resistance during the early and mid-summer generations of the pest.

According to NEWA, if egg hatch of the first generation of codling moth has been completed then it is too late to apply control sprays at this time because late sprays will not prevent fruit damage. If fruit becomes infested with codling moth during the first generation, it will make subsequent control more difficult later in the season. Most apple fruit infested by codling moth larvae at this time will drop prematurely and will not be detected at harvest.

If you detect apples infested with codling moth in your orchard, please let me know ASAP so that I can make a trip to your farm to collect material.

Do you have any suggestions for articles on arthropod IPM? Please let me know! 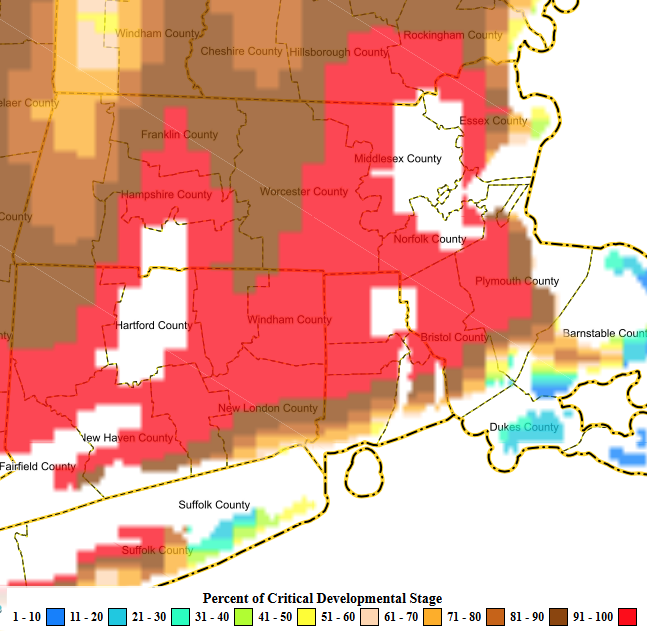 Last week, Liz Garofalo posted a couple of pictures of a cherry bud blast and blight on Twitter, asking people to guess what the cause of a disease on cherries was, fungus or bacteria? Brown rot or Pseudomonas? It’s easy to confuse the two diseases, as symptoms on the blighted flowers and twigs look very similar. Here are Liz’s pictures. 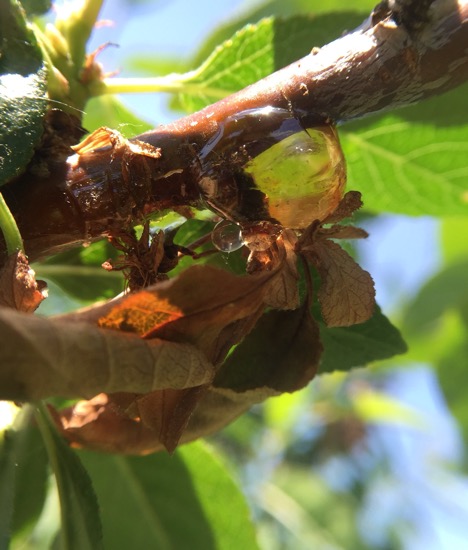 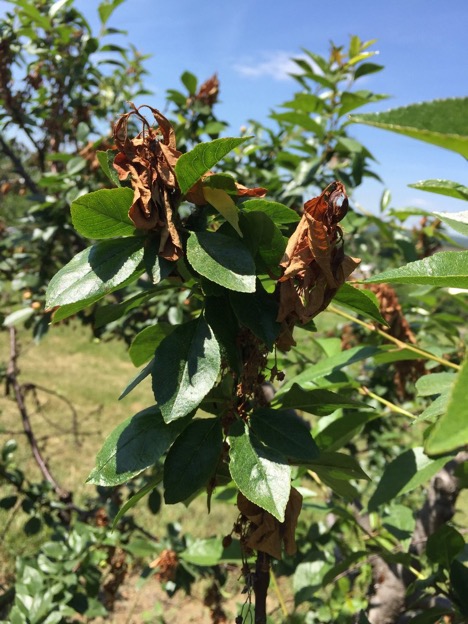 I had an opinion, but decided to collect samples and see what they told me. If you put a diseased plant sample into a “moist chamber”, that is, a sealed plastic bag with a wet paper towel, fungi and bacteria will grow, hopefully the fungi and bacteria that may be causing the problem.

After a day and a half, I took some diseased pieces of the cherries and put them under the microscope. Problem solved. It was brown rot, a fungal disease caused by Monilinia fructicola or Monilinia laxa.

Brown rot caused by the first species is usually just called American brown rot or just plain brown rot, while brown rot caused by the second species is often called European brown rot because M. laxa is more common in Europe, or at least it was. A few years ago, we had an unusually severe outbreak of brown rot blossom blight on peaches. Kerik Cox identified the cause as M. laxa, the first time the pathogen had been definitively identified on peaches in the Northeast. 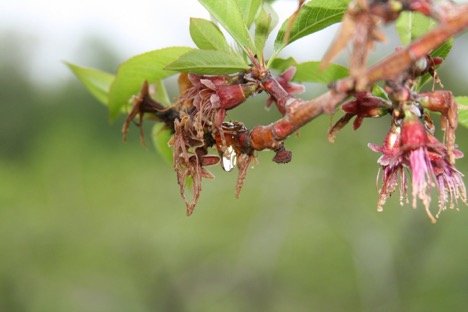 Jon Clements had noticed that the problem on cherries was at CSO was more severe on Danube, a European variety that is “sweet tart”, and also more susceptible to M. laxa than more typical tart cherries such as Montmorency. M. laxa is also much more active in cool wet conditions than in warmer conditions. And when it hits, it’s more likely than M. fructicola to move right through blossoms into spurs, causing oozing.

About five years ago, Michigan cherry growers got surprised by a severe outbreak of brown rot blossom blast. According to plant pathologist George Sundin, the sweet/tart variety Balaton was hammered by European brown rot. Even Montmorency suffered some infection.

Where brown rot blossom blight hits, it’s important to cut out and remove infected shoots from the orchard to reduce inoculum. It also emphasizes the importance of maintaining fungicide protection against brown rot during bloom. With European brown rot, the infections cause more than blossom loss.

What am I working on out in the orchard now? When I have a chance?

Hawkeye’s corner (notes from the field)

If you are planning to use sucrose (white table sugar) as a feeding deterrent for birds in your cherries (or berries) remember, it will not deter cedar wax wings! Sucrose has been reported as an effective deterrent for robins and starlings.

Is this individual the calm before the storm…??? 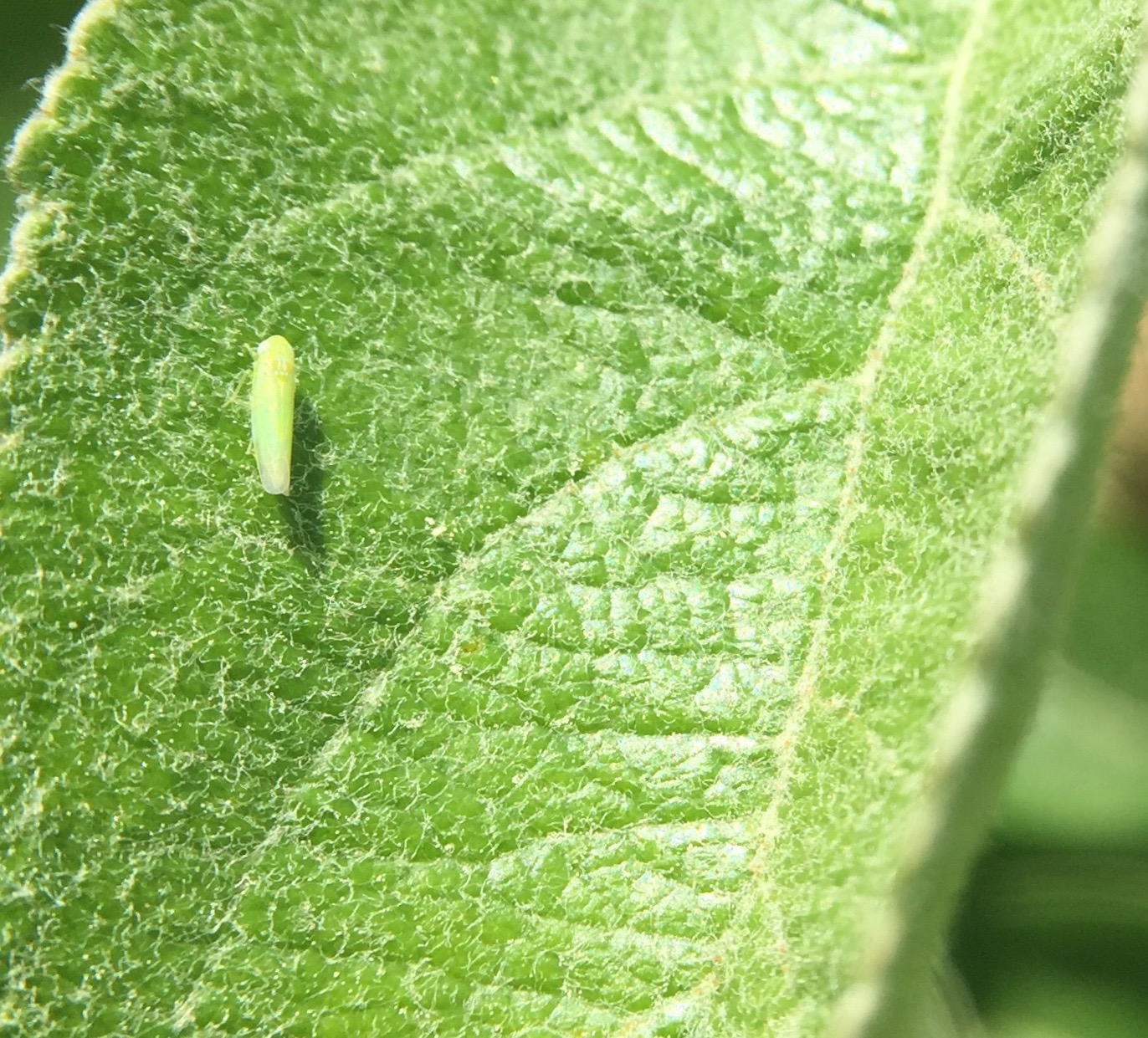 Potato leafhopper is around and numbers are still fairly low. For now. Continue to keep an eye on young plantings and protect as necessary to prevent reduced growth from feeding damage.  They scoot sideways very quickly, making good pictures tough! 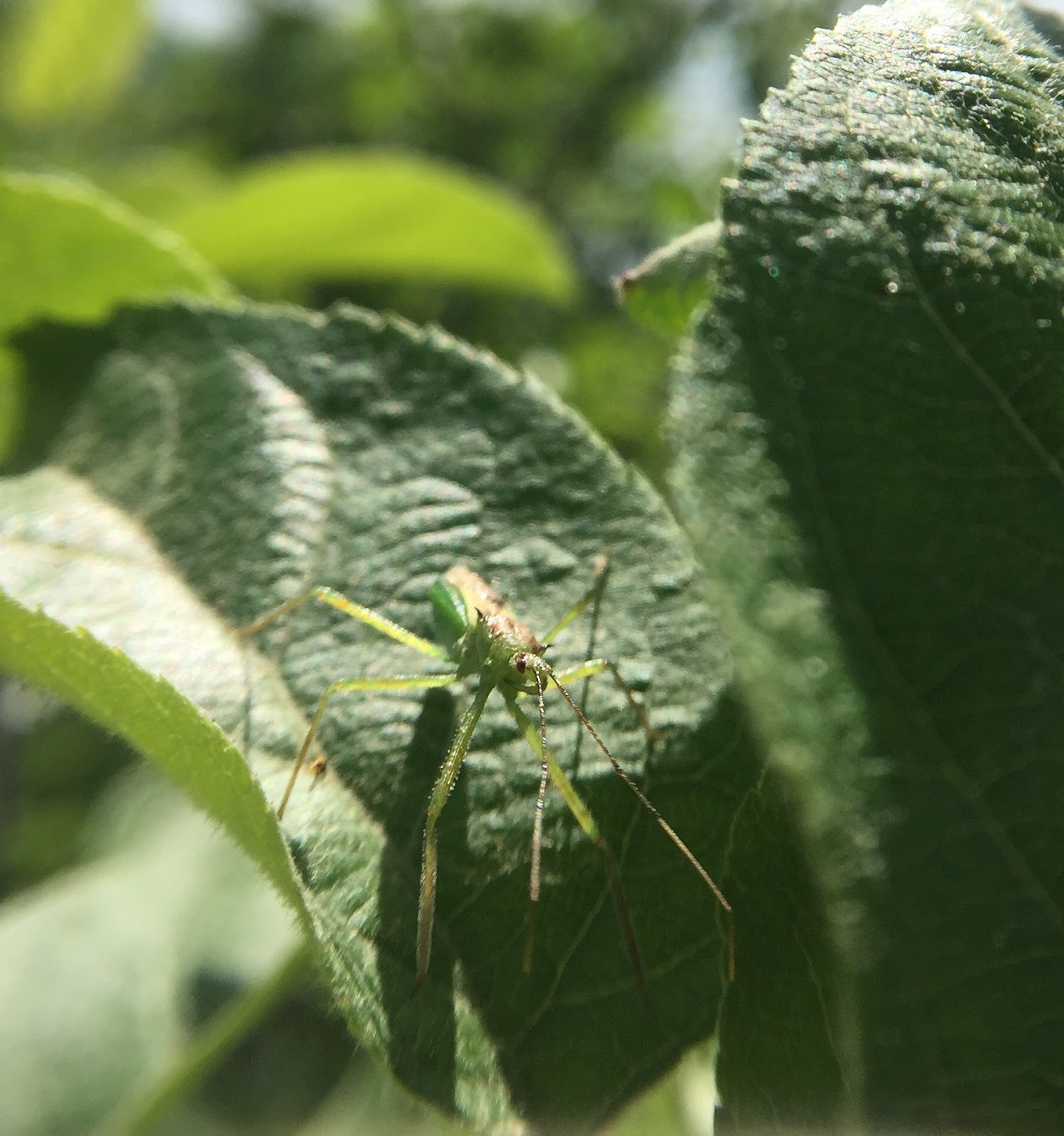 Beneficial insects like this assassin bug are out and about too. The assassin bug has front legs adapted for grabbing unsuspecting prey, stabbing it with their mouth parts (you can see the proboscis tucked under the front of its head, be aware they do “bite” when handled) and sucking the juices out. Likewise, aphid predatory midge (Aphidoletes aphidimyza) larvae are out in full force (little orange critters in the photo below). 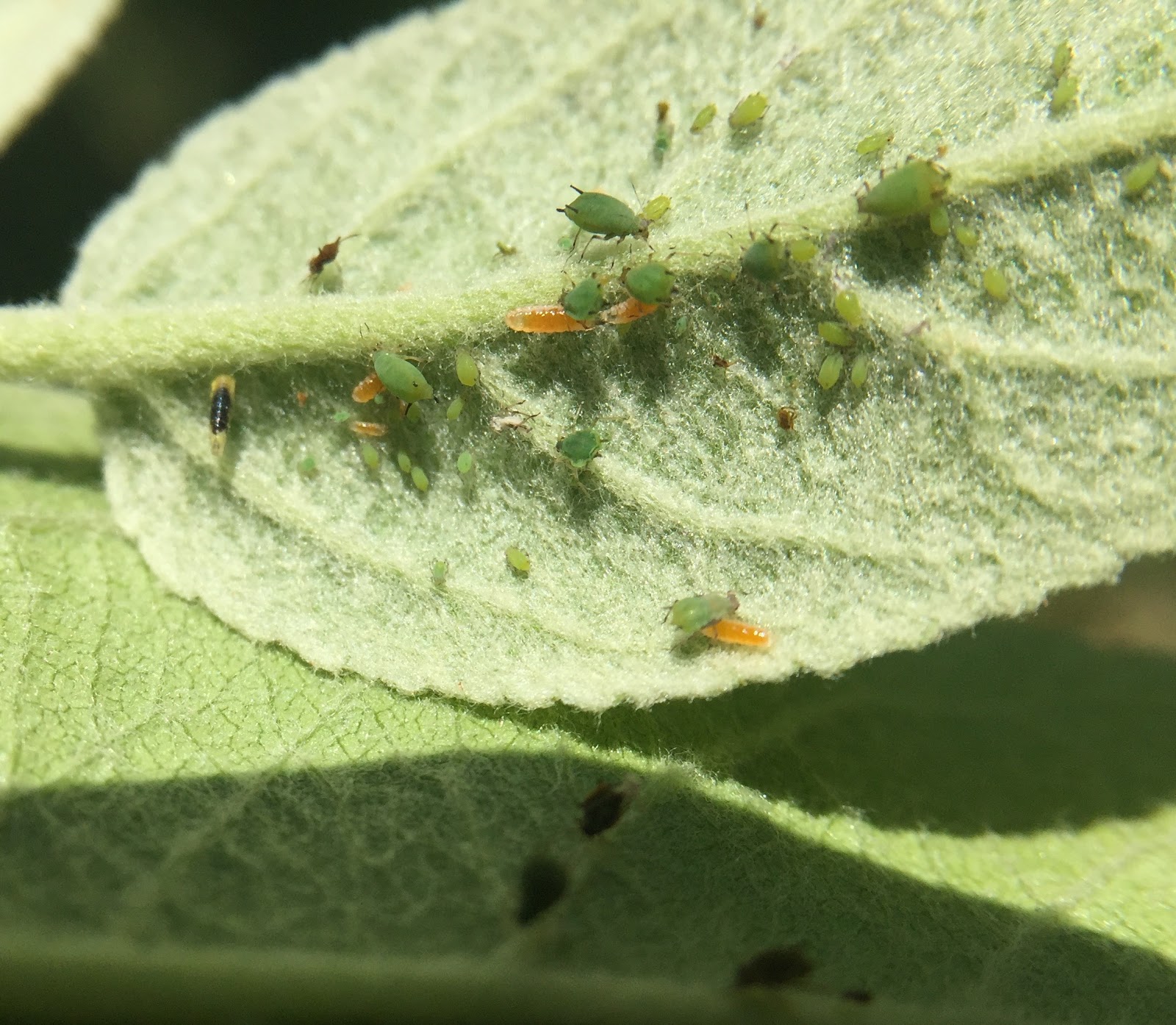 Pear psylla (good grief I feel like a broken record with this insect!) is STILL present in pear blocks and will remain so throughout their 3-4 generation per season (so, be prepared for this broken record to keep skipping). We are in a good treatment window with eggs and very early instar nymphs. So, if you happen to find you are above threshold when scouting for this pest (10 tender/new leaves per 5 trees with an average of 1.5 nymphs or more per leaf), rotate from the IRAC you used last time to a new one for treatment now. 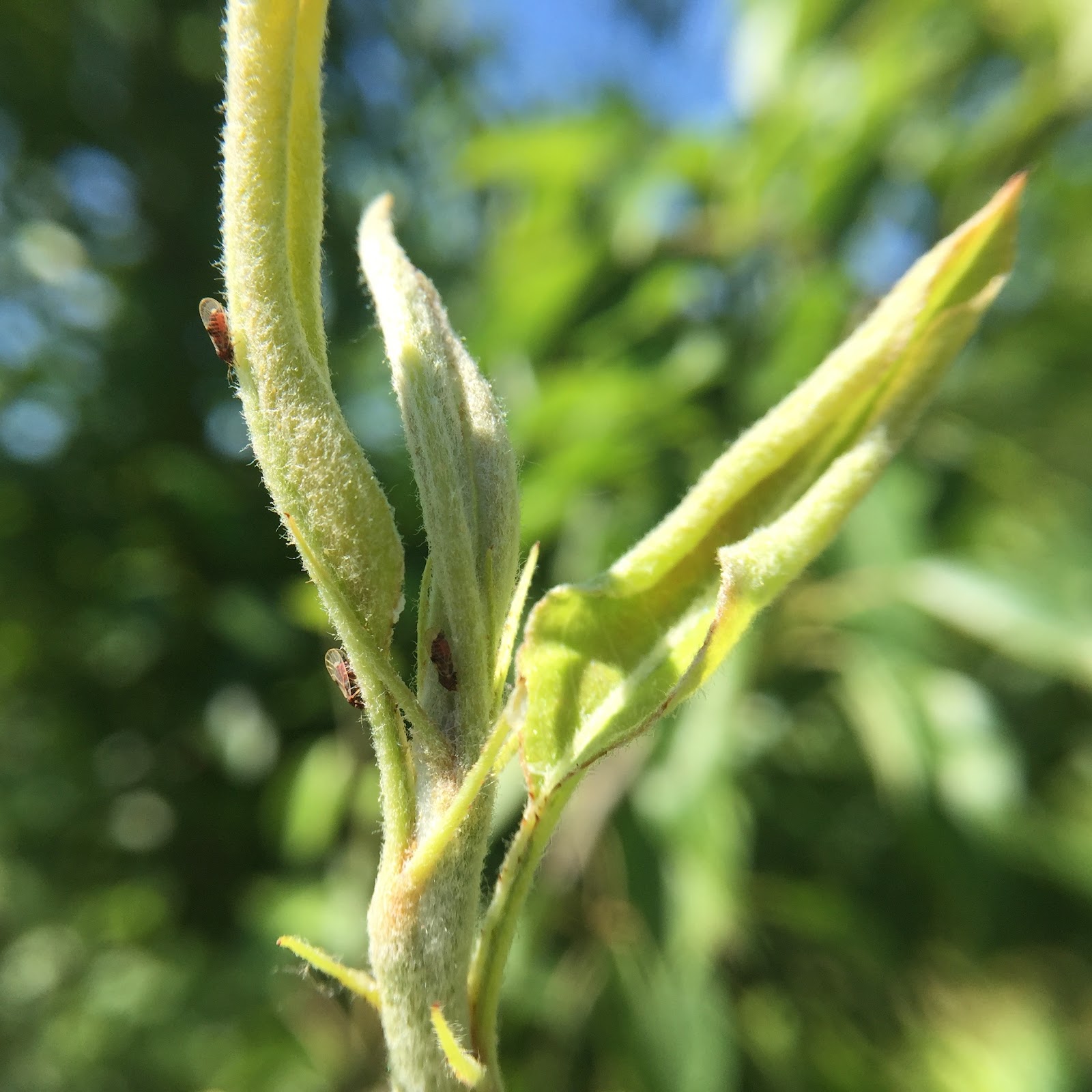 Pear psylla adults are also present, so, adding a low rate of horticultural oil will deter further egg laying.  The weather looks like it will cooperate for the next week or so for oil applications. 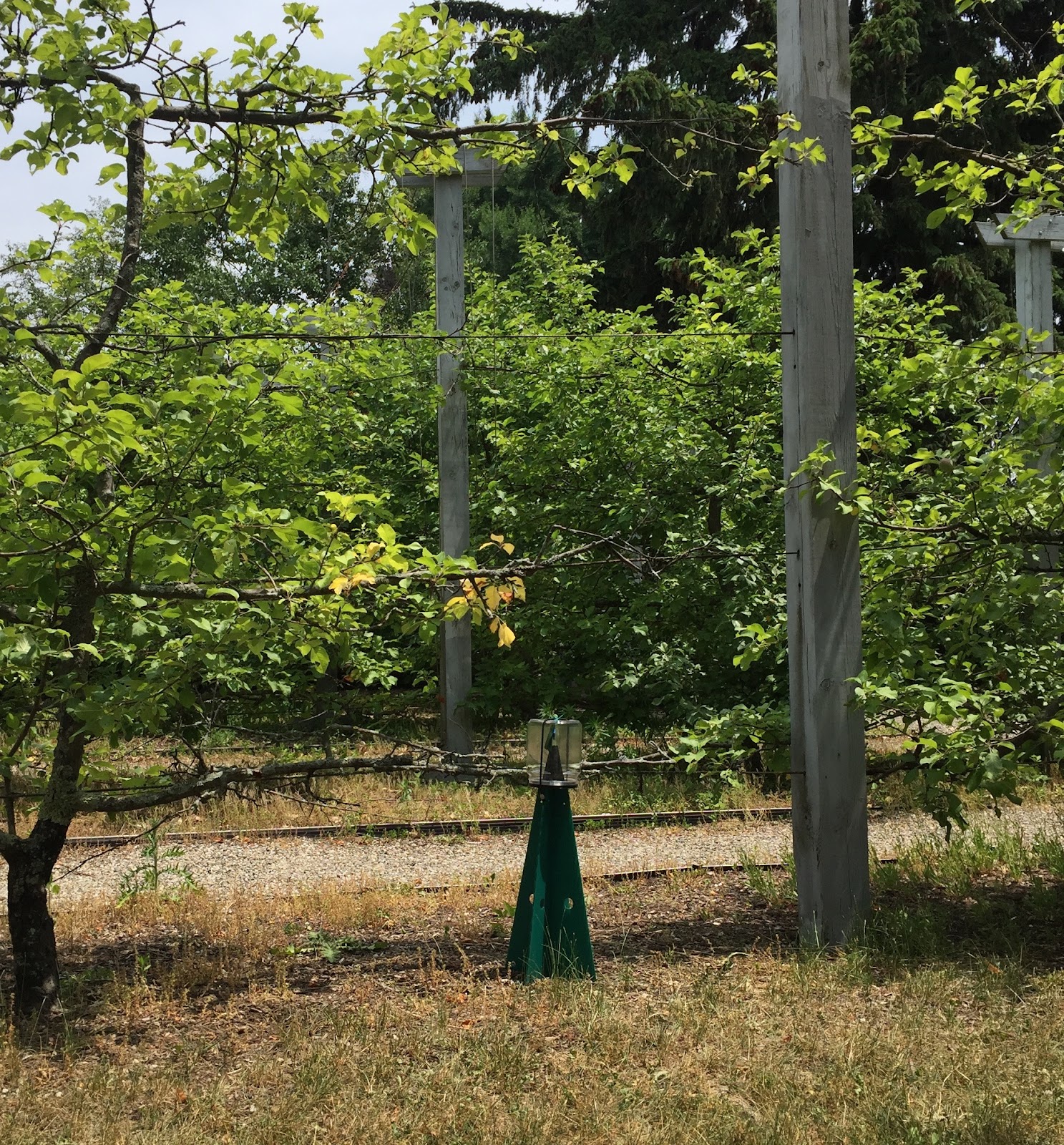 Brown Marmorated Stink Bug traps are being deployed across the state. This one located in espaliered apple trees in front of the UMass Amherst Durfee Conservatory where we know a population to exist). In one orchard location, the Fruit Team’s iPiPE interns Lyndsy and Cam have already captured and positively ID’d one. (Just one.) 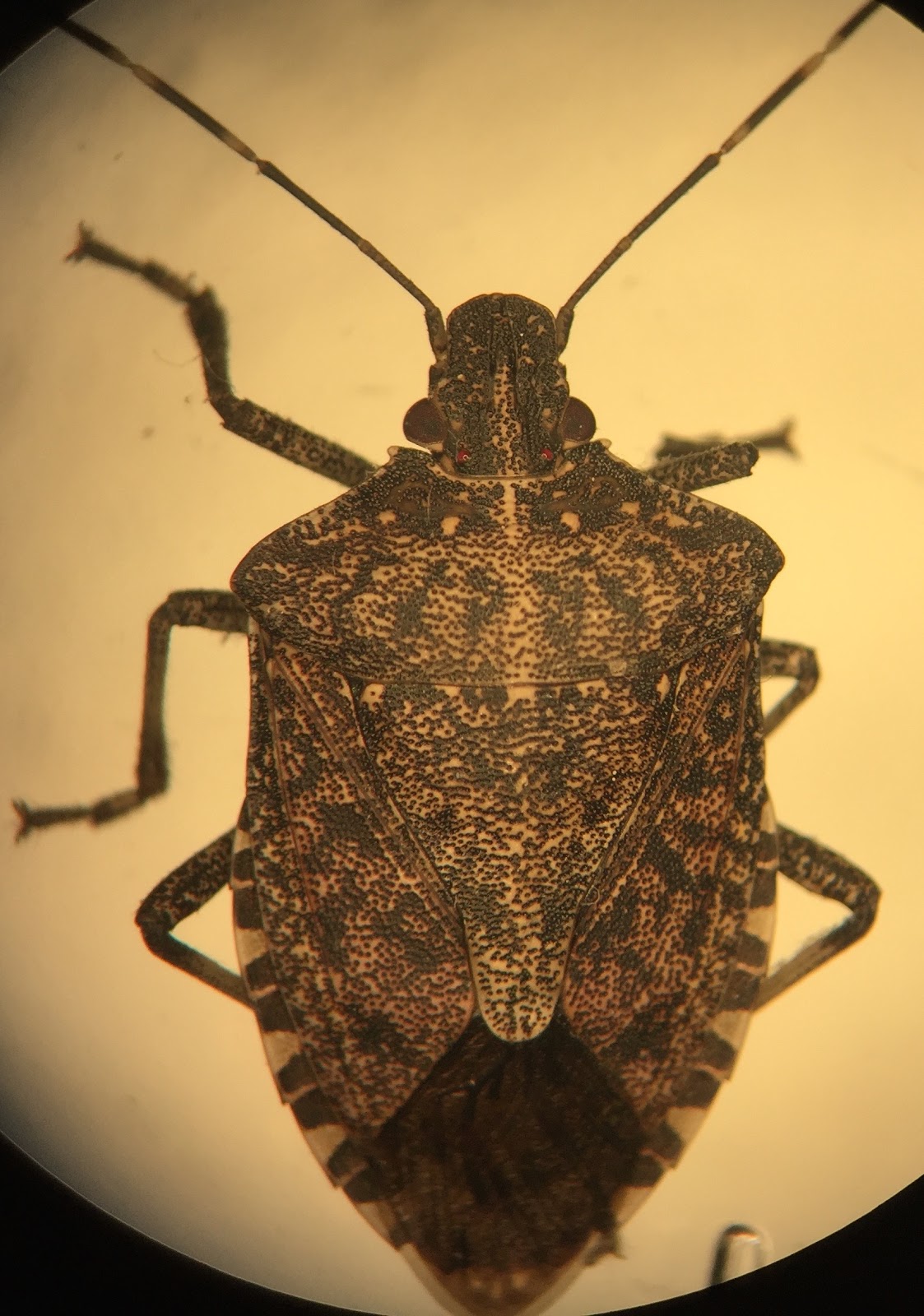 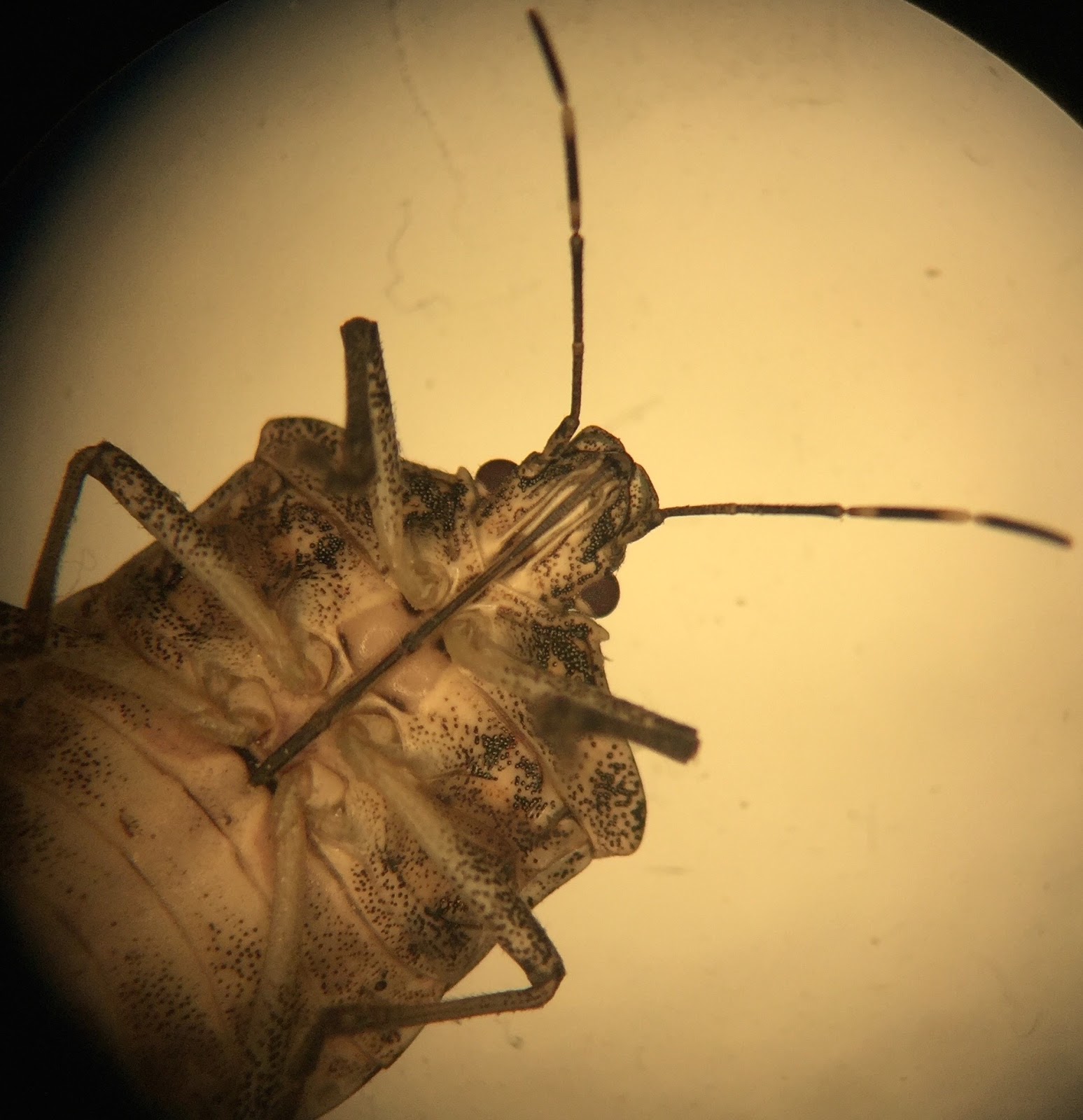 Fireblight also appears to be kicking around still, here and there as well.  Prune out of smaller trees on a dry day. There seems to still be some contenion around the “to sanitize between cuts or not to sanitize between cuts” question...Anyone ever try using Lysol disinfectant wipes? (Ed. note: I recently heard just dipping in a bleach or alcohol solution DOES NOT work. Just cut out well below the strike on a dry day. Smaller shoots can just be ripped out w/o cutting. Better to just get them out of there than procrastinate as to how to disinfect pruners between cuts.) 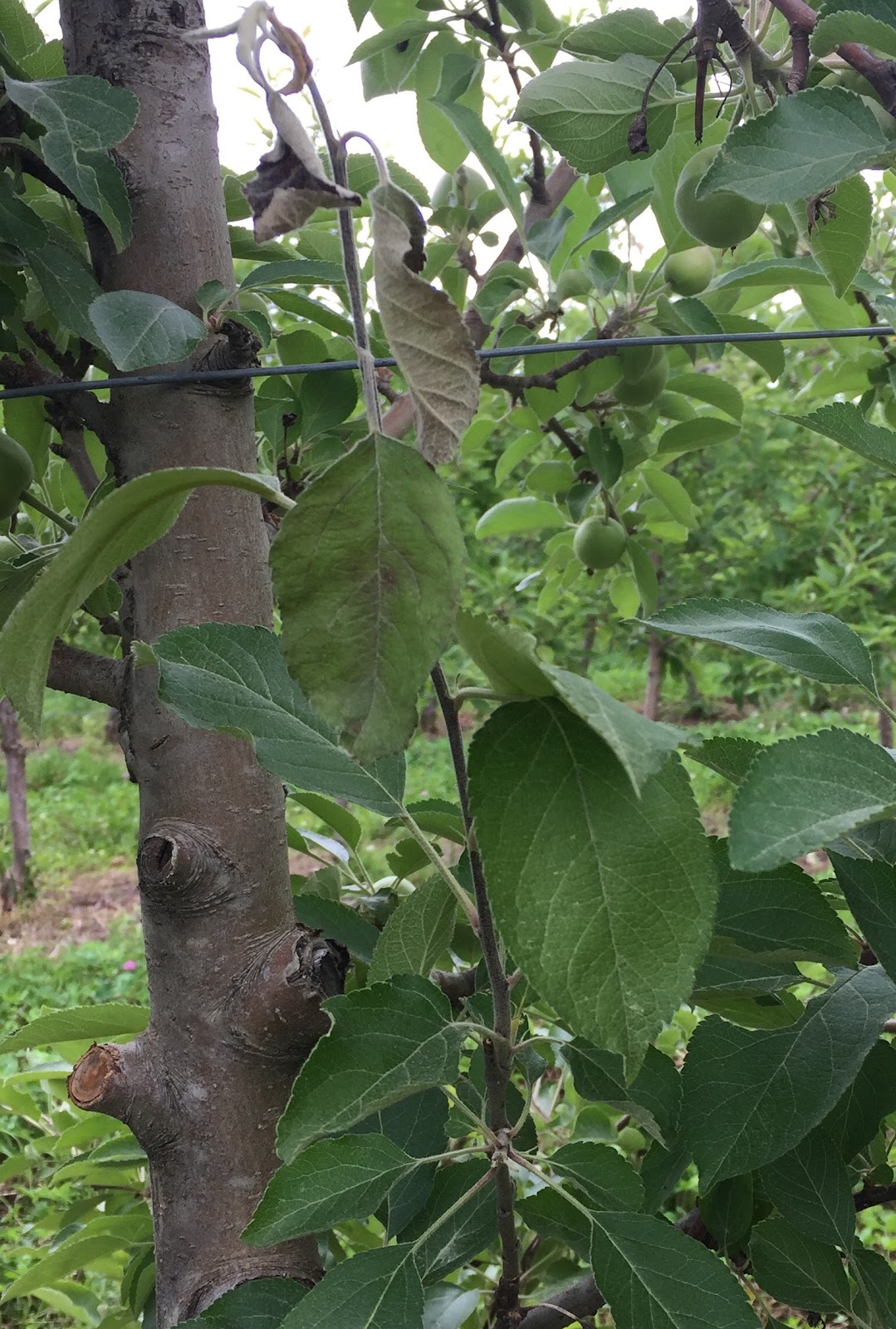 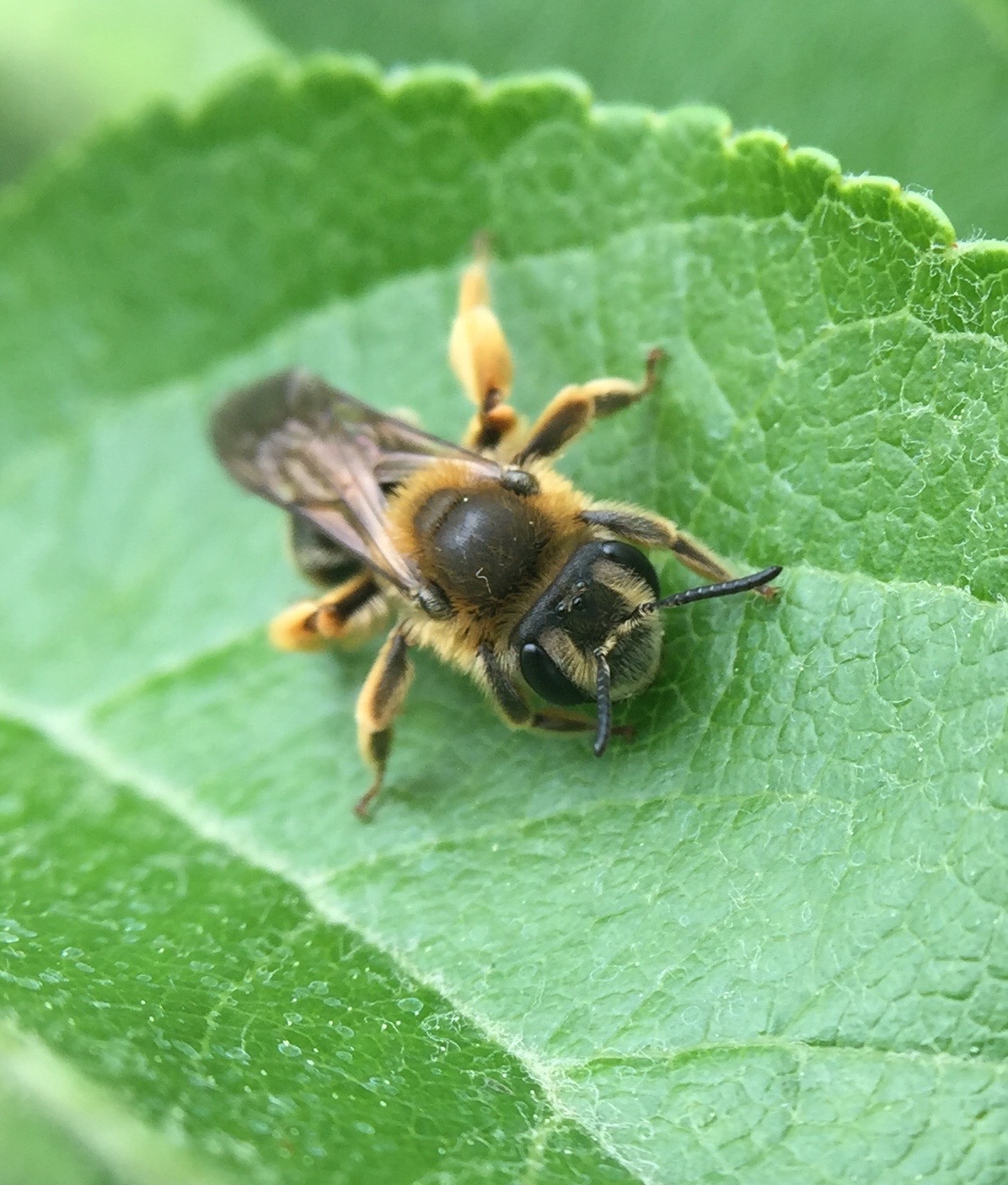 As many of you may know, this year we are lucky enough to have two amazing undergraduate interns working with us to collect pest data, among many other things. Last week a question posed by the iPiPE group and answered by Lyndsey Ware, Lyndsey’s answer was shared here.  This week, another question has been posed.  Following are both the question and Cam’s response.

Question: What is the most difficult part of scouting for pests?

Answer: (Cameron Olanyk) What I have found to be the largest issue for me while scouting apple pests is being familiar with the specific damage caused by each and how to differentiate between possible mechanical injury or herbicide damage and actual pest presence. Some signs of damage or presence are easier and very distinct, for example the rolled leafs and webbing left behind by Obliquebanded leafroller or the scars on fruit left by Plum Curculio. Others have been a bit more tricky however when trying to catch them in their early stages, like telling a small scab lesion from insect injury. It is also possible to mistake dieback from a broken twig or branch with the shepherd's crook of fireblight. Another one that has tricked me a few times has been when scouting pear psylla. When I thought a few times that I had seen hard shell nymphs, after poking around I discovered that in fact I was just finding what must be the molted shell and not a living insect. If not investigated it could lead a grower to believe that the newest stage of adults was not yet flying and throw off their management timing.

As the season progresses I think Lyndsey and I have both become much better at confidently recognizing pests and their damage, and I hope that we will only get better with time. With so many pests and signs to keep track of it sometimes gets confusing, however it has reinforced in me the need to always be focused and curious when scouting and not to be afraid to ask questions or be wrong. 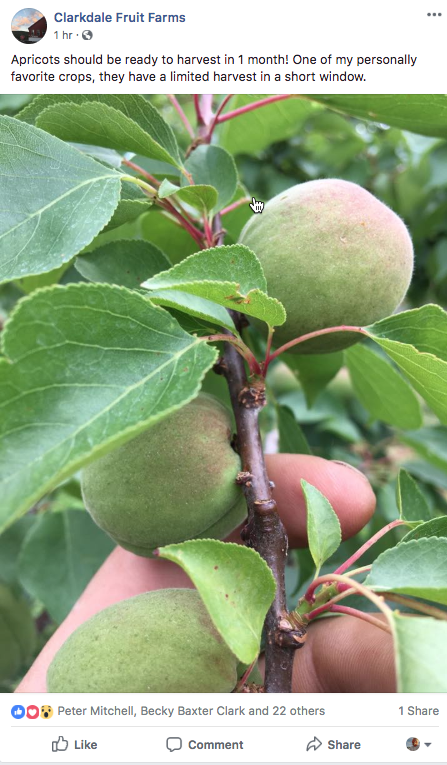 The next Healthy Fruit will be published on or about June 26, 2018. In the meantime, feel free to contact any of the UMass Fruit Team if you have any fruit-related production questions.