Project Name: The Throne of the Emergent Multitude

The Emergent Multitude will be a wooden structure consisting of a 5-sided seating area, an elevated perch and 5 tentacle monsters of various forms emerging from the center column to a height of approximately 16 ft. 5 flaming spires, and a central poofer encircle the top of the structure to an elevation of 20 or more feet. All flame effects will be kept well above any wooden pieces, and will be removable for the burn. It will function as a gathering place and resting spot as well as an artistic expression. Those who sit under its tentacly canopy will be rewarded with a space like no other.

The structure will be colorfully stained in many areas to add visual interest. Work will be done from a plan, or not, but lots of ornamental details will be left up to improvisation by volunteers who  help with construction, engaging the community in the design process as well as the construction.

The piece can be thought of as four elements: The bench seating area, the central column/perch, the tentacles, and the removable flame effects. I will be more descriptive about each of these below.

The bench area will be 2 feet tall and four feet deep. It will be built to withstand the weight of participants either sitting or standing. The floor surface will be thick plywood with a small amount of holes, for light and airflow when burning. All vertical panels will be ornately cut out with volunteer sourced designs. The lower structure will be lit from within casting shadows on the ground around it.

This structure will be the attachment point for the tentacles as well as the flame effects, it will be built of 2x4's for the vertical posts and thick plywood for the horizontal supports. Plywood will be perforated so it burns well, and will be reinforced as needed. At the 8ft level, there will be a small backed bench, with seating for two, from where the poofer will be located and controlled.

There will be 5 tentacles tapering outward from the 4 ft level of the central column. They will be constructed of a layered plywood spine and plywood discs as ribs. They will slot into holes in the central column at the 4 ft level and some will be anchored as high as the 8 ft level. At 16 ft one of these will be the highest part of the burnable structure. One will also serve as stairs providing access to the perch.

There will be 5 continuous flames extending outward up to about the 16ft level. They will be located away from any combustible parts of the structure. A propane tank in the central column at the 2ft level will supply .

The poofer will extend at least another 10 ft past the 8ft level, putting it well above the tallest tentacle. The tanks for the poofer will be stored in a compartment at the 4 ft level, underneath the perch, where they will be able to be accessed and secured.

All flame effects will be able to be easily removed for burning.

I envision packing underneath the bench area with firewood prior to the burn, the rest of the structure should be to generate enough airflow to burn quickly. I hope that the upper parts of the tentacles will be fully engulfed as the center column is weakened to the point of collapse. It could be a very dramatic collapse.

The piece will be built in sections, so it can be disassembled for transport and storage. My transportation plans have yet to be determined, but I know lots of people within the community who would be willing to help. Captain Ron Comes to mind, as do you, James. I believe the piece will fit in a single pickup with trailer, or in a box truck.

Since Guildwerks has shut down, I have been in the market for a new workshop/art studio. So this future place is where the effigy will be built. I estimate that the piece can be built in about three months at a decent pace with some volunteer help. I want to involve as many people in the community as we can, the more people who want to work on it, the more intricate and detailed it can be.

In order to meet our fundraising goals, I will crowdfund my additional expenses which would be ineligible for the grant

As the proprietor (or perpetrator) of this piece I will conduct regular moop sweeps of the sculpture and immediate area. An attractive piece such as this will attract a lot of forgotten items as participants will gravitate towards it.

Post Burn the burn scar area will be tended to consume all of the consumables in the fire, and the remaining charcoal and metal remnants will be magnet raked and shoveled up to be hauled off the property.

Ideally I would like to find someone to take on the role of lighting and flame effects lead. I will lead the build of the effigy itself, and will delegate tasks to whomever is willing and able to complete these tasks. Having additional leads for various aspects of the project takes a lot of the effort off of the project lead and gives any co-lead/designers a sense of ownership of the project.

Because of the tall nature of this piece regular safety checks will need to be performed while it is standing. I will be responsible for checking on the structural integrity of the sculpture throughout the week. I will be looking for anything which may create a trip, fire or falling hazard.

All flame effects will be built in accordance with NFPA 58 LP Gas code and NFPA 160 Standard for the use of Flame Effects Before an Audience. A fire extinguisher will be on hand whenever the flame effects are in use

During the burn, because of the possibility of falling flaming debris, I recommend the fire perimeter be set at a radius of at least 2.5x the height of the tallest point.

As we get closer to the event, and plans get more finalized, I will coordinate with Rangers and BAMF to coordinate a timeline for fueling, performance and burn. 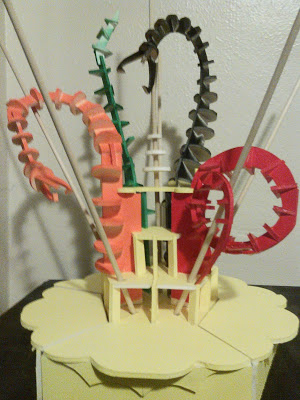 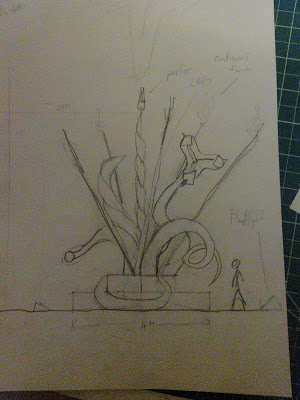 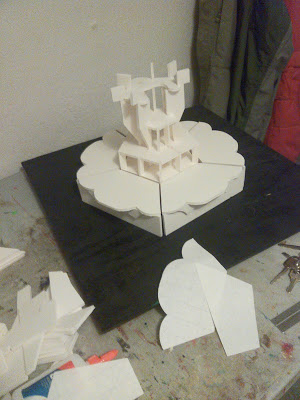