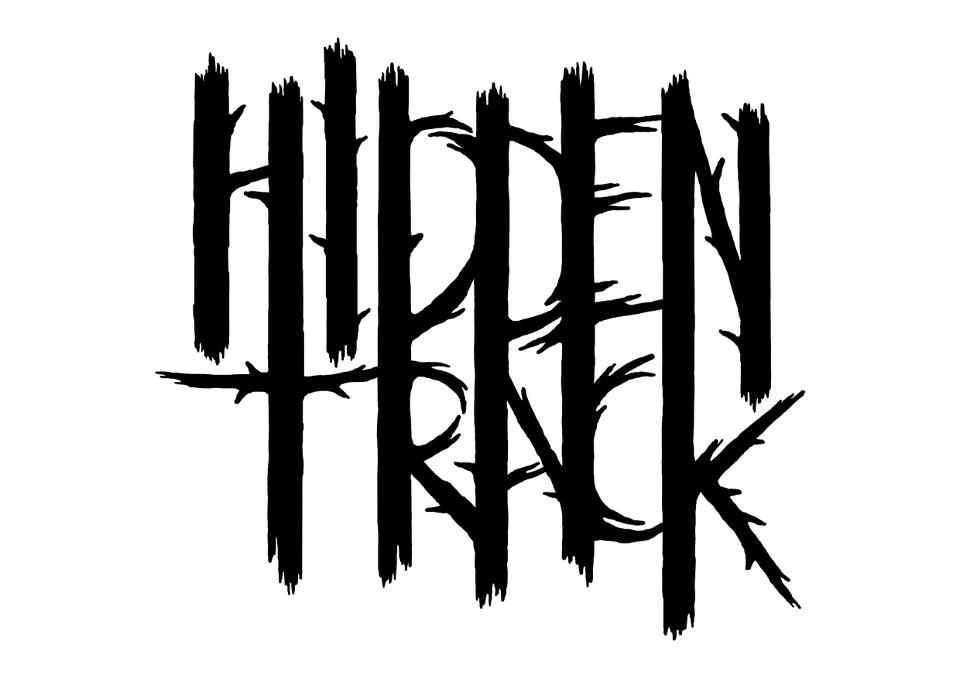 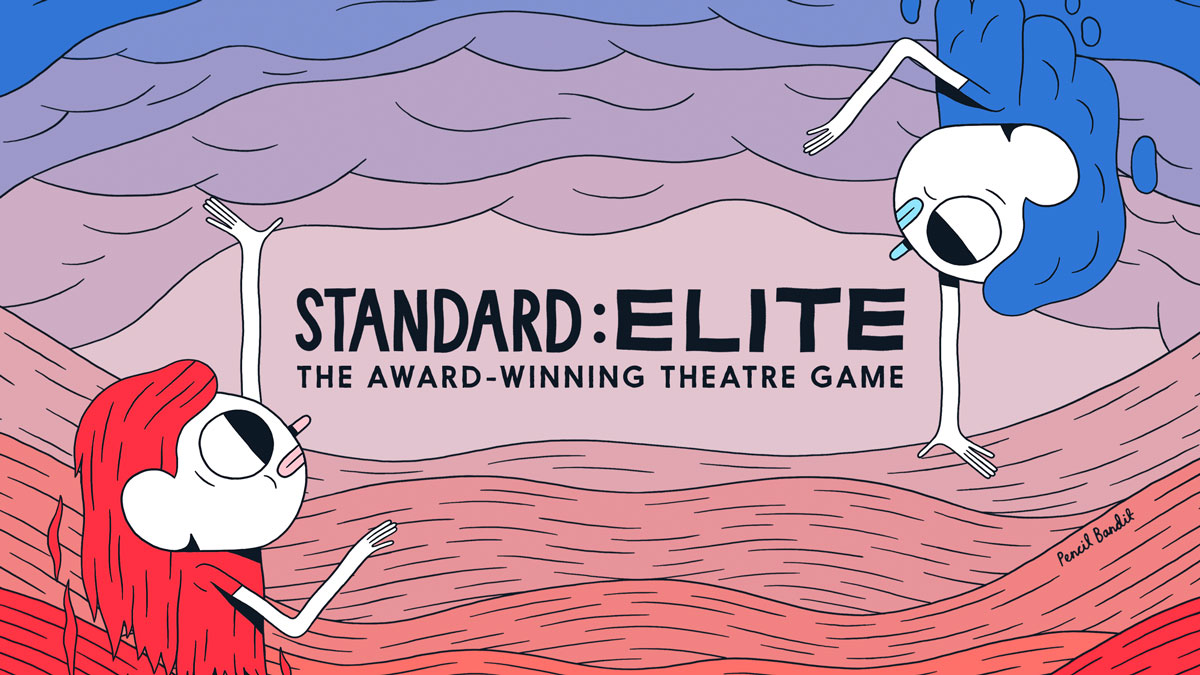 How long is the show?

The show is 90 minutes long with a 15 min interval (not shown on the video).

What is the show about?

The show starts with the audience being greeted by the storytellers and seated in two teams - one team, the ‘Elites’ are sat on the stage - they are a much smaller team - in this version, there are only 15 chairs available for Elites. The other team, the ‘Standards’ are sat in the auditorium. The teams are decided by each audience member rolling a dice at the beginning that has the team symbols on it. There is a xylophone ‘bong’ sound over the speakers that signifies the play starting. A voiceover plays and explains the audience's role in helping to tell the story. Throughout the play, at various points, the audience on the stage are asked to vote between two characters to follow, which they do so with blue thumb lights. The action is also interrupted at various points by a voiceover of a disembodied voice to keep the story on track. In the beginning of the story, the storytellers tell the story using household objects to depict characters and weather. Eventually, the storytellers become the characters and continue depicting all the characters in the play. In this first act, the audience in the auditorium are invited on stage to complete tasks and play games as part of the story. The games in the first act include a game where the audience has to pick up as many cotton wool balls from the floor as possible and a game that involves a call and response game. This game requires four audience members who are either hiking through mountains or through tunnels (depending on which character the Elites pick). The two audience members who win the game, will be invited to join the Elite team - the Elite team decide whether to accept these new recruits or send them back. Finally, the two protagonists reach the tower they have been travelling to.

The second act opens with the storytellers welcoming the audience back and continuing with the story - Elites in the interval have been asked to complete tasks - those who have completed a task, become Elite audience members. They are at the foot of the tower where they meet the next set over characters. The Elites vote on which character to follow. The next game works like bingo; the Storytellers pass out sheets to the audience, the storytellers will then continue the story and the audience has to shout out the corresponding phrase that is on the sheet they are given. The four Standards who are successful are invited on stage and, as all of the Elite places are taken, are asked to choose which Elites they wish to replace. The Elites who are chosen have to take their seats in the auditorium with the rest of the Standards. The story continues with the protagonists reaching highground, a place that is bright and wealthy, shown mainly by nice lighting and cakes being passed around by audience members. There is a big party and the guests of the party are shown as face masks that are puppeteered by the actors. After a big fight, the whole audience is invited onto the stage for one big game of throwing balls at skittles. This is interrupted by the Musician who is working for the Voice. The play finishes with the Voice terminating the story.

Who is in the show?

The show is made up of 2 actors, who play different characters and a live musician who remains on stage the whole time.

The characters in the show are:
Storyteller, The Boy, The Turtle Crone and Susan the Serious Skunk, who is played by an actor called Sophie Mackenzie.

The Musician is a musician/performer Joe Brownbridge

Storyteller, The Girl, Bill the Mountain Duck and Harvey the Fishman, who is played by an actor called Elliot Hughes

This is Sophie MacKenzie 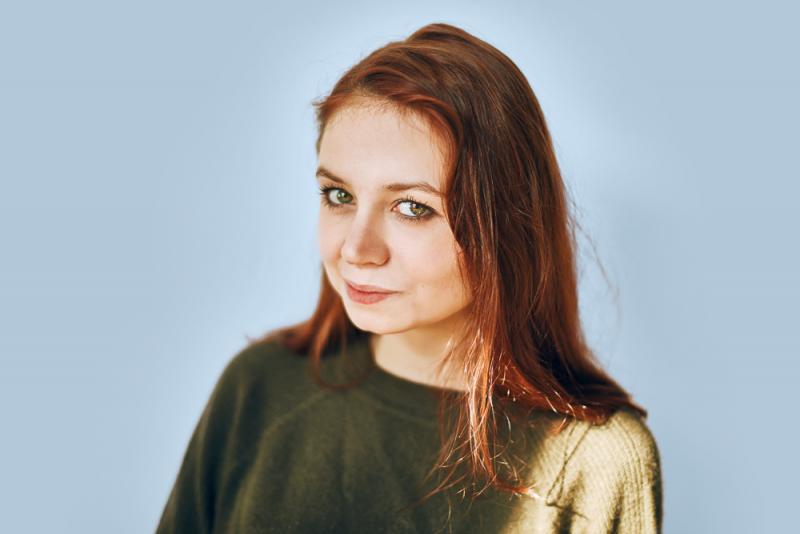 This is Sophie in costume as The Storyteller/The Boy: 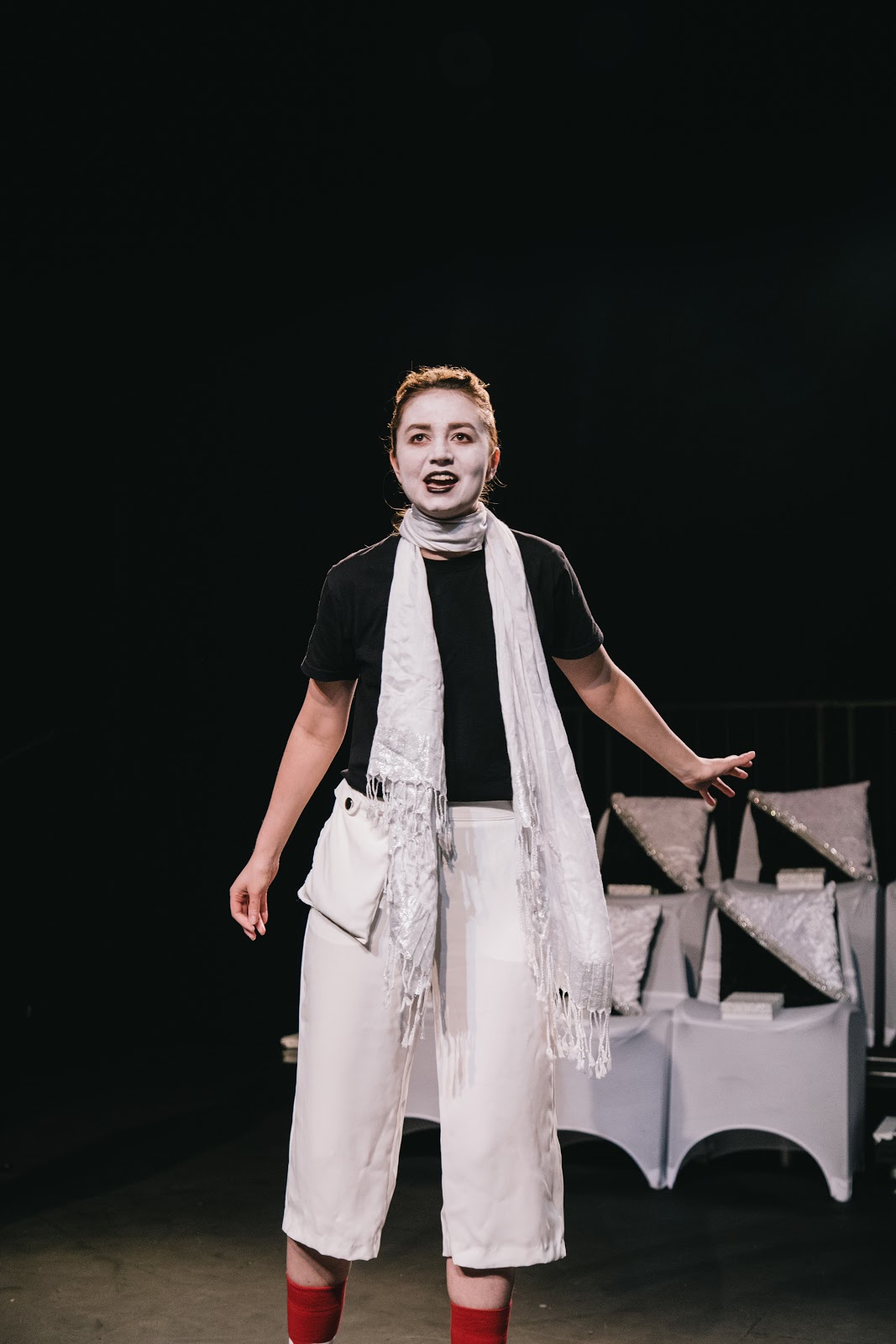 This is Sophie in costume as The Turtle Crone: 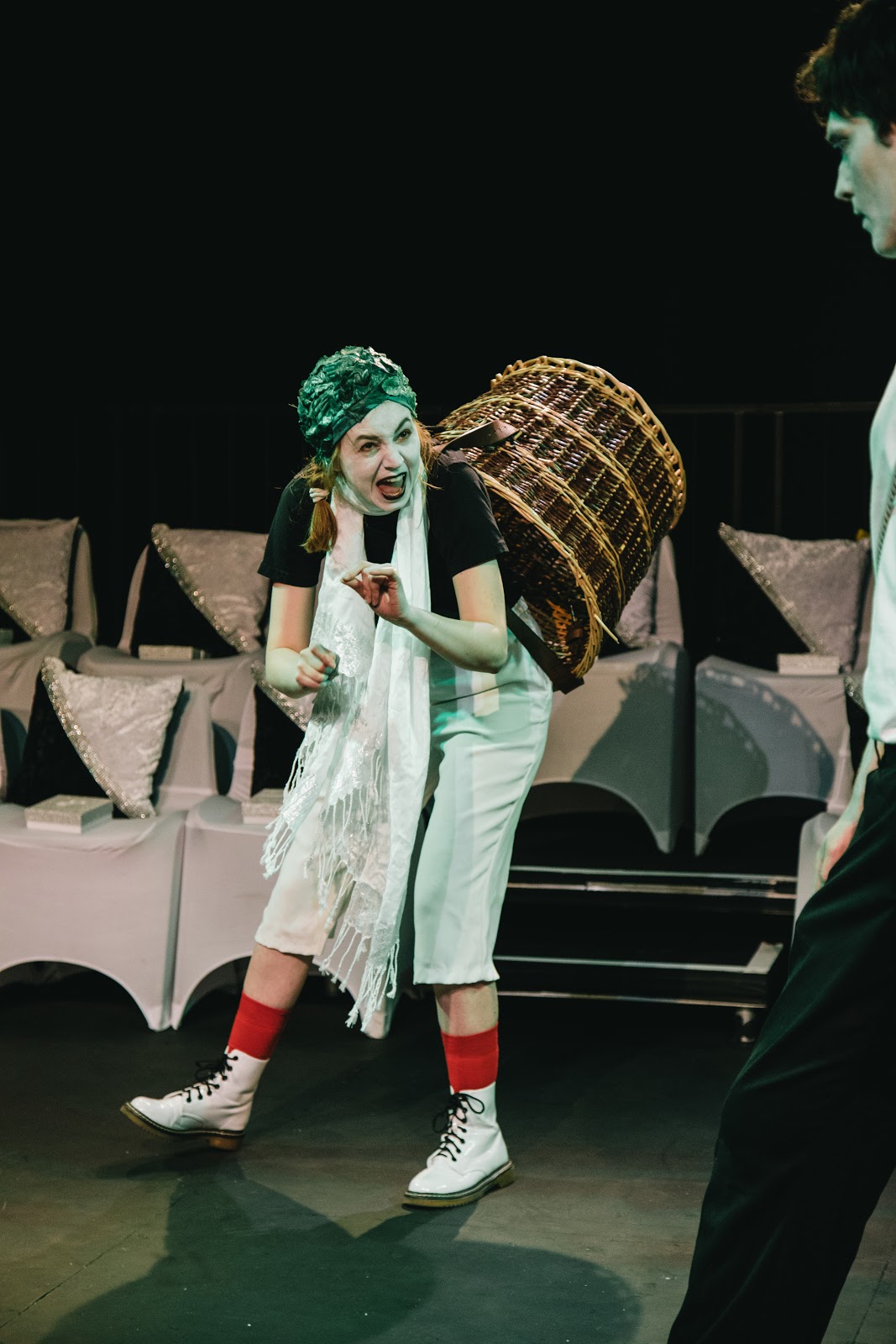 This is Sophie in costume as Susan the Serious Skunk: 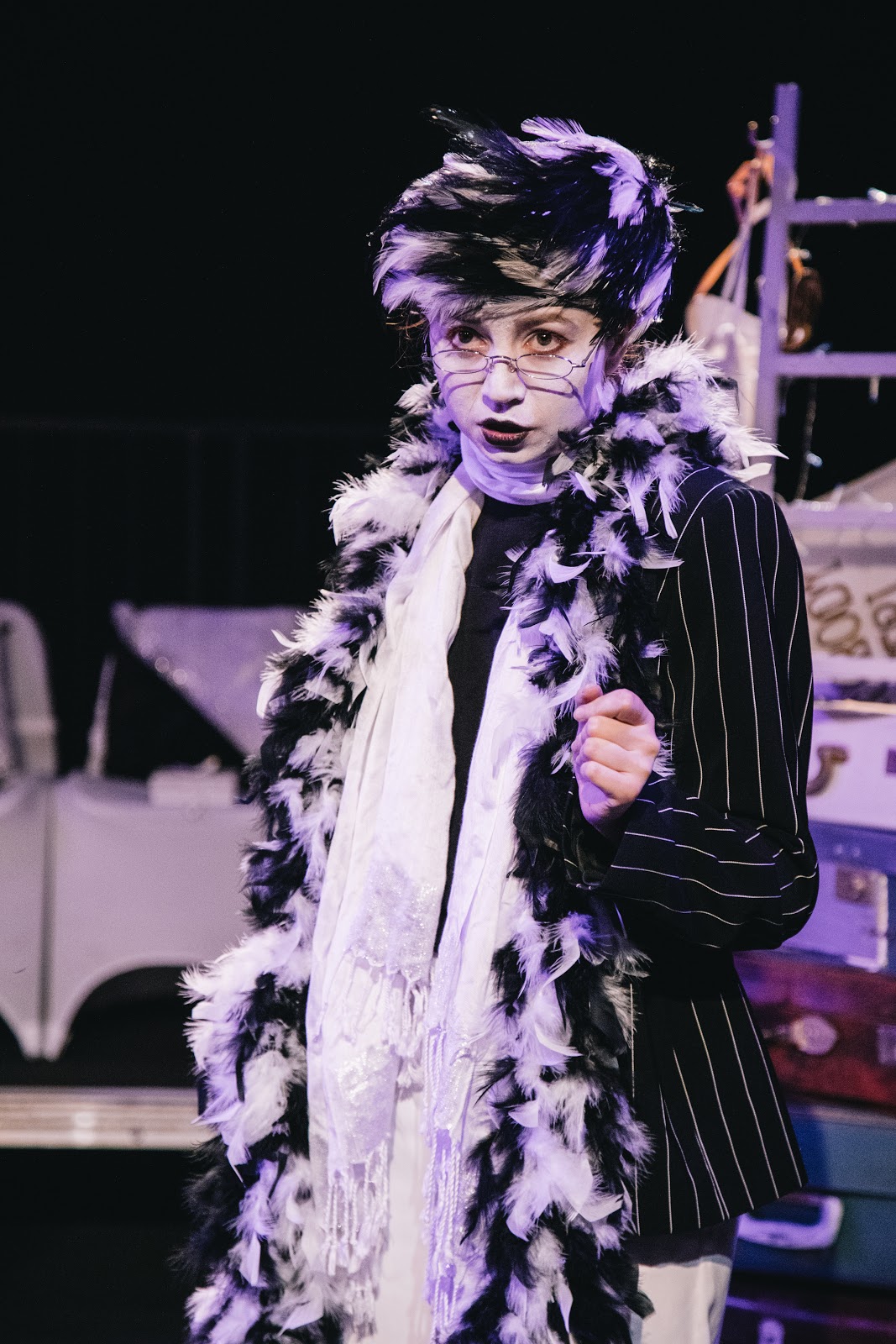 This is Elliot Hughes: 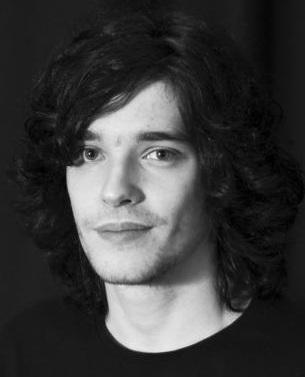 This is Elliot in costume as the Storyteller/The Girl: 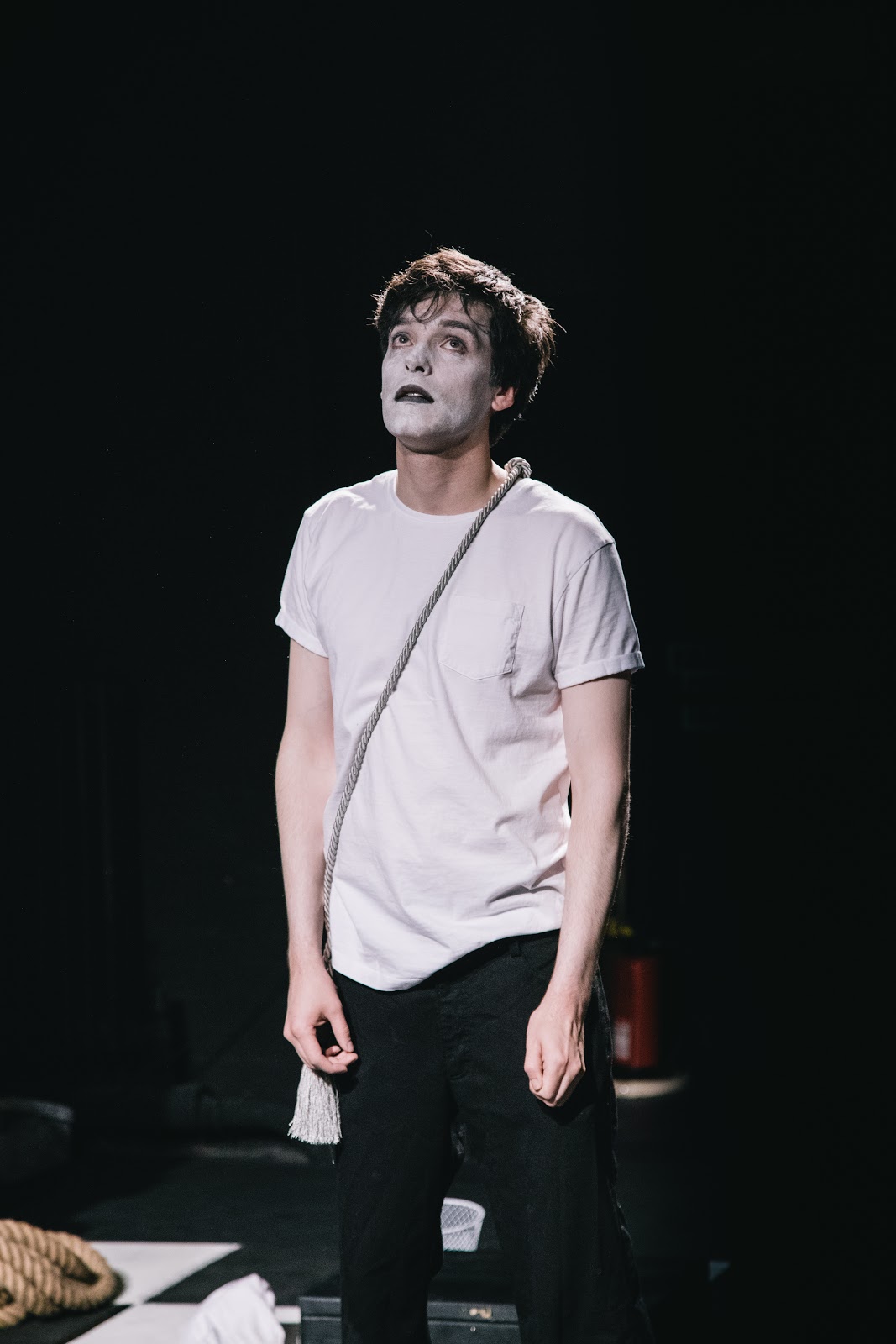 This is Elliot in costume as Bill the Mountain Duck: 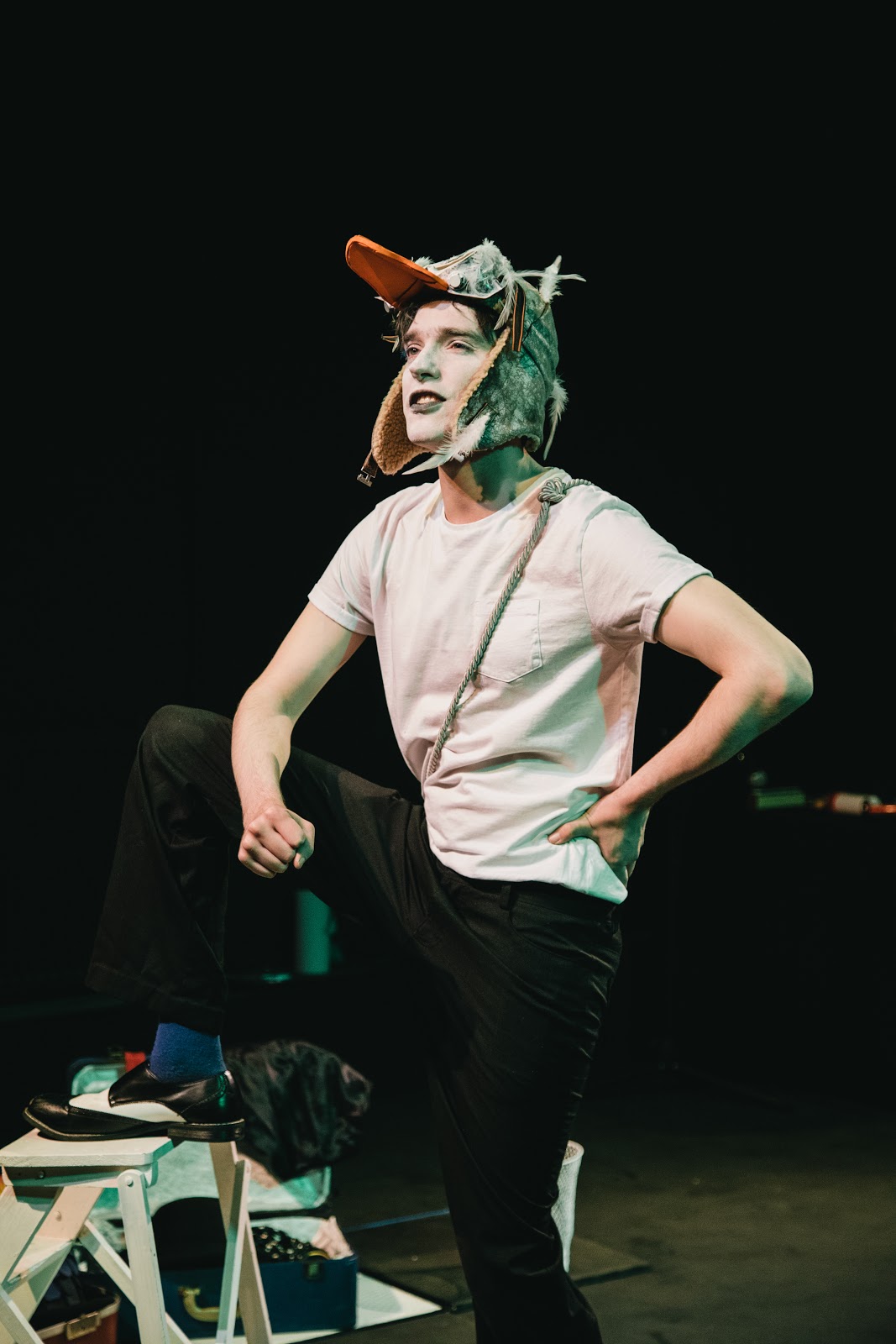 This is Elliot in costume as Harvey the Fishman: 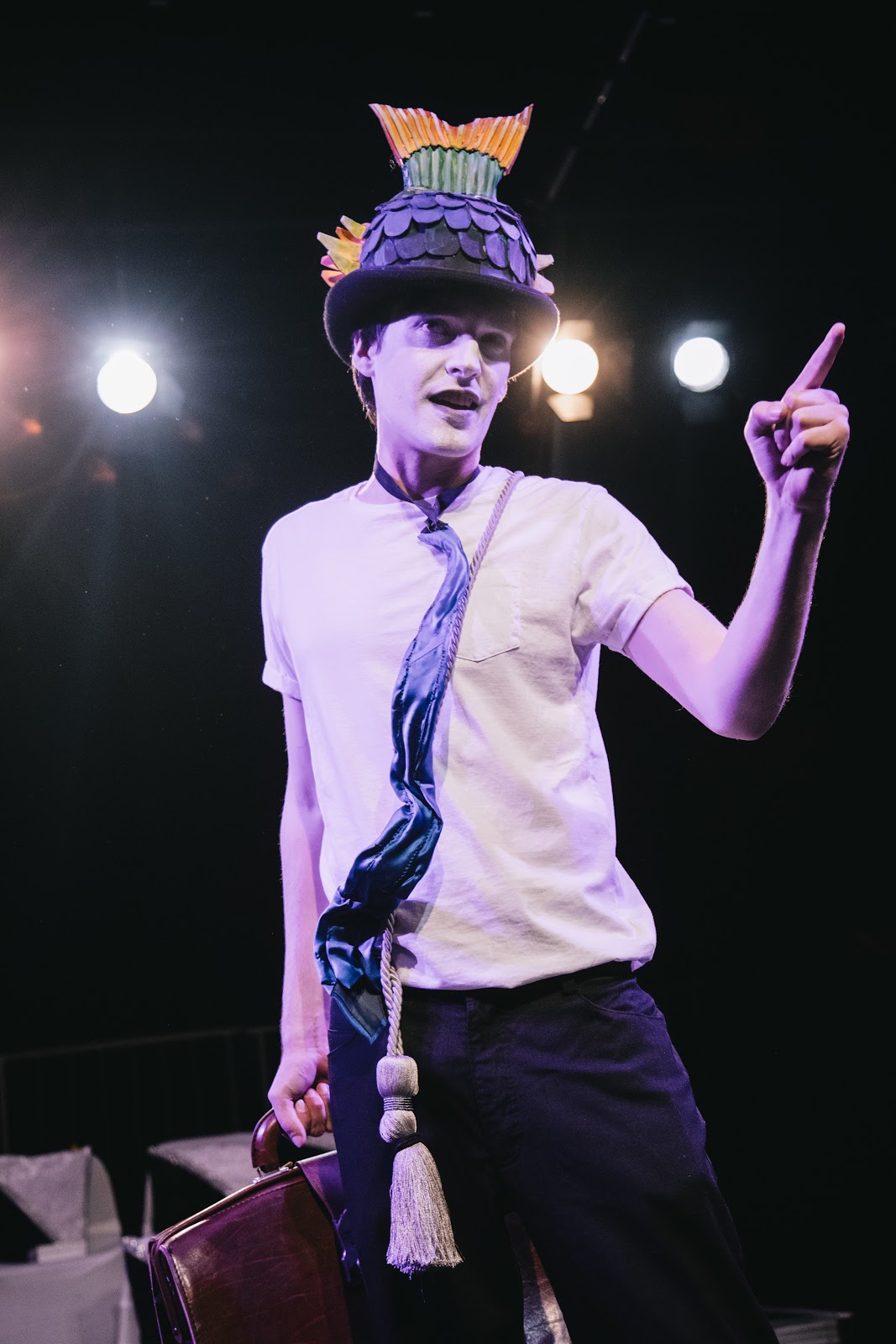 This is Joe Brownbridge: 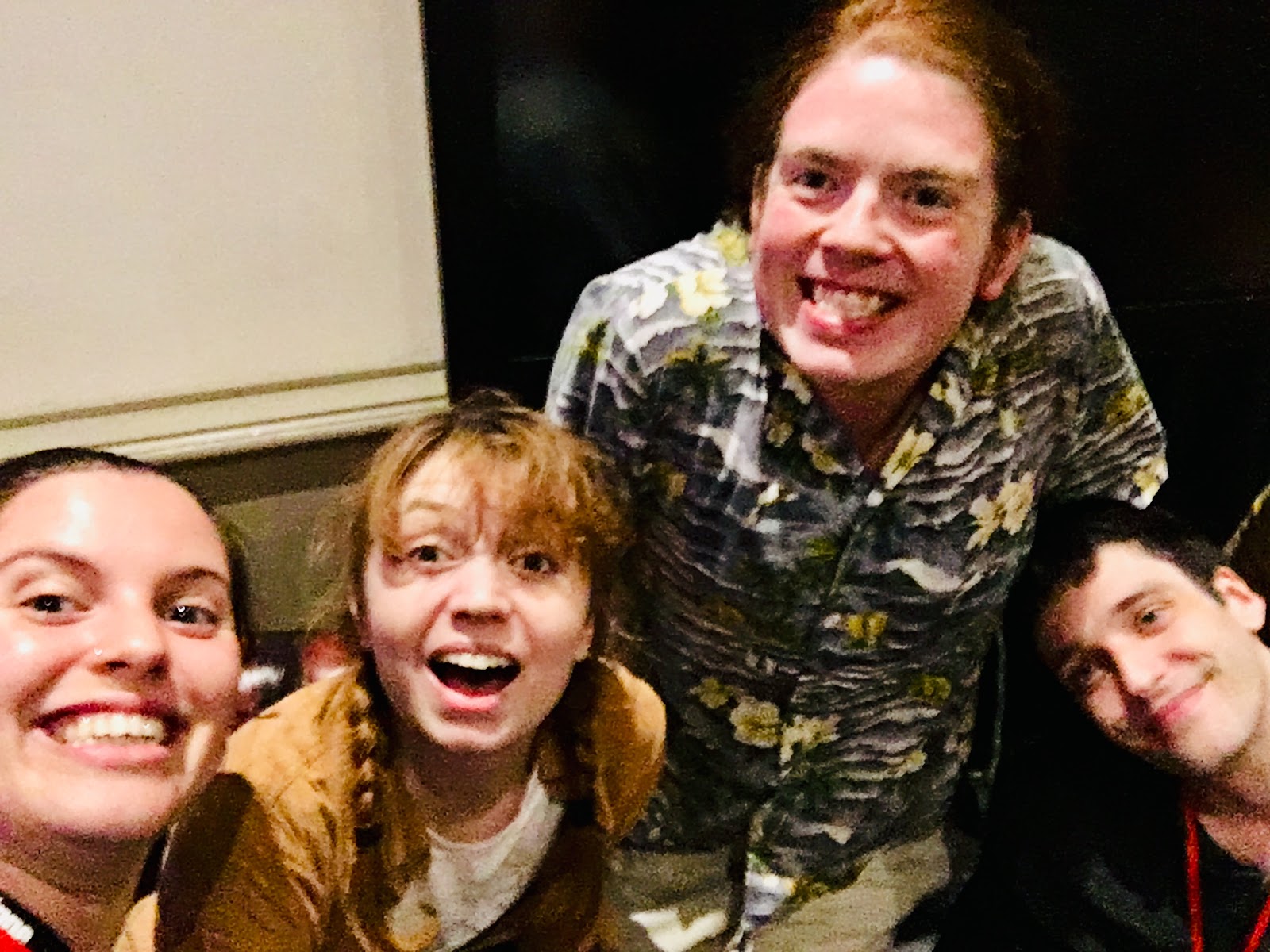 This is Joe in costume as The Musician: 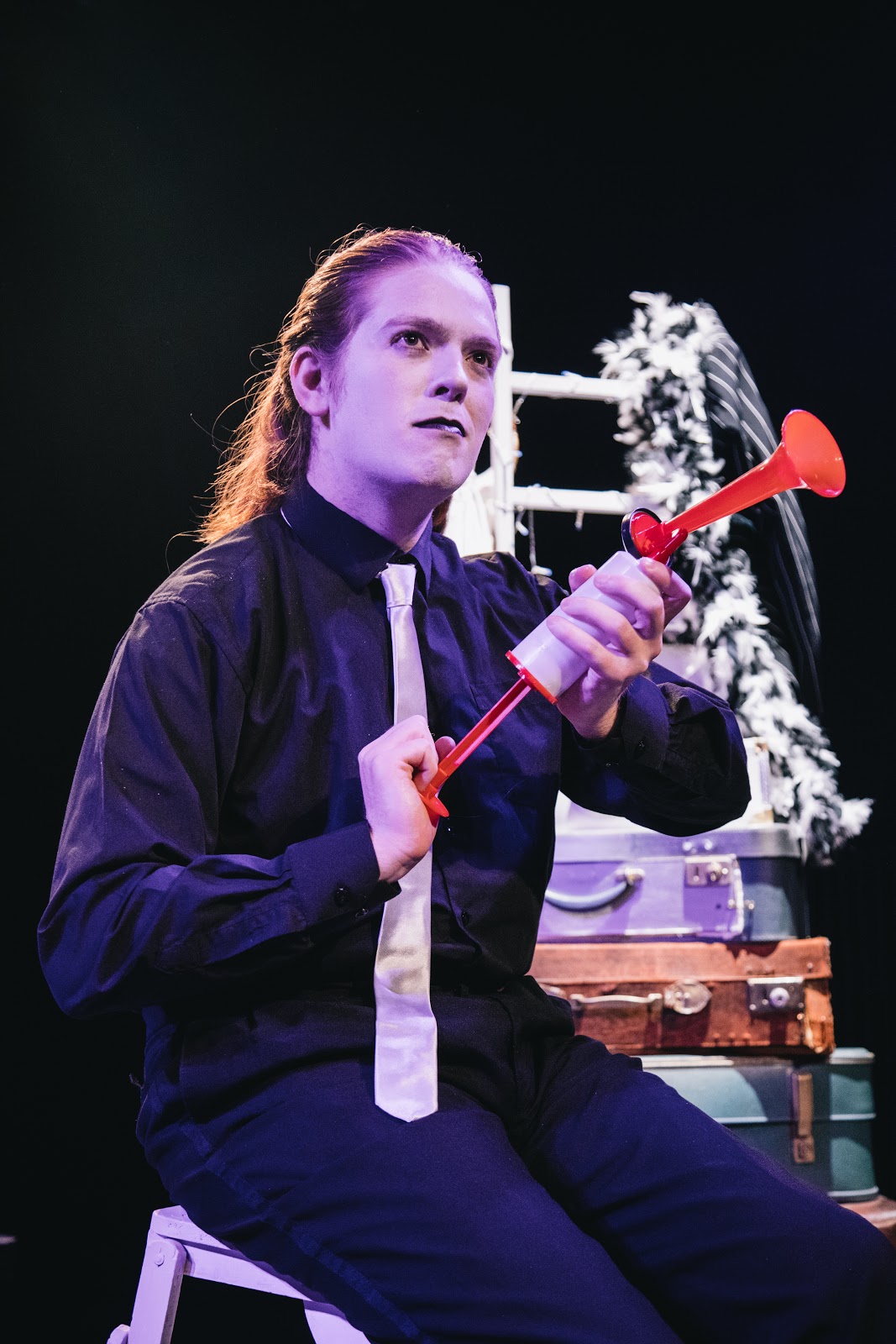 When I arrive in the theatre what will I see?

When you arrive in the theatre you will see a line of nice looking chairs on the stage. There is a stack of suitcases in one corner of the stage with a white ladder coming out of the top. On the floor around the stack, there is an assortment of objects including a black box, a big rope and waste paper bin. In the opposite corner, there is a red suitcase and blue suitcase that are full of costume plus a smaller white ladder. Both stacks are on top of white and back chequered flooring.

When you arrive in the theatre the lights on stage will be a general wash and there will also be lights on the audience to help you find your seat. Lighting will be used throughout the show to help to show when the actors are telling the story and when they are in ‘the real world’ - green, blue, yellow, purple and red colour is used to show the ‘story world’ and stark white light is used to show the ‘real world’.

There will be live music playing when you arrive in the theatre. There will be music throughout the show that is played by the musician on stage. At points, there is also a voiceover that comes over the speakers and a xylophone bong sound. At the end of the big game at the end, there is one loud fog horn sound.

hiya@hiddentrack.org.uk for more information about this show and any other Hidden Track show.