a possible winch idea that uses a telescopic arm that will raise a worm gear mechanism that will allow itself to latch onto the bar and lift itself up.

progression on claw prototypes. currently added hooks to the ends of the arms to hold onto the sides of the cubes

Since the goal for the electronics, mobility, and function teams is to build an “intelligent” robot, meaning that it’s equipped with sensors that help it function better, the intake should be designed carefully and should have appropriate spaces for sensors, such as the ultrasonic rangefinder.

Intakes as of the date posted above:

Up until this point is is not determined as a consensus by the function/strategy/mobility team as to which type of intake will be on the final version of the robot. It was decided as of 1/13/18 to move forward with prototyping both a claw style intake and a roller style intake. During the initial stages prototyping the roller intake, the team noticed that it may not be completely necessary for the roller system to completely engulf the entire width of the cube. This would mean that the roller intake would be gripping the cube with wheels closer to the cube’s center of mass. In addition, the roller designs would not have to protrude as much from the chassis. Tension would be used to have the compliant rollers press against a concave portion of the milkcrate cube.

The general design for this type of roller intake was to have both sides of the intake (parallel to chassis wheels) be on a pivot from the base of the intake. The system would only have two wheels as rollers that would rotate at the outside edge of the intake. The wheels would also be belt driven to reduce weight away from the center of the robot. The sides of the intake would be initially angled 5 degrees inward to ensure that the cube corners would hit the wheels properly. The robot would drive up to the cube and the sides of the the intake would bow outward (against the tension) which would secure the cube in the intake. On top of just the rollers this prototype had an additional “prong arm” that would be initially stowed just above the sides of the roller intake. In theory these pronged arms would swing out passively, or with a small servo,  and grip the cube around the corners. These pronged arms would have vice grip like tips that would be optimized for the contours of the cube. These “prong arms” would allow the intake to pick up cubes diagonally with the prong arms coming around the corners of the rotated cube. This is advantageous as it should ensure that the roller do not need to spit the cube in and out to orient it properly. By being able to hold the cube both head on and diagonally, the rollers will naturally rotate the cube to either perfectly diagonal or parallel. Specifically, once one of the rollers can not longer rotate the other roller would continue until the cube is diagonal or perpendicular. When it would be time to remove the intake from the robot the prongs would rotate away and the rollers would give the cube a horizontal velocity to score in the switch or scale.

In a sense, both of these designs are combinations of rollers and claws. The first desgn being a claw on top of a roller, and the second design being a roller on top of a passively tensioned claw.

A principal claw intake was also prototyped. Both arms are able to rotate independently and only extend as far to grip the cube at its center center. The tips of the claw would have a compliant material to better fit the contours of the cube.

The team has decided to go with pneumatic intake. This was done for several reasons.

Considering the tight pathways and corridors in this game a longer narrower chassis is being considered as a better alternative than a wider, shorter chassis. The robot is going to need to be able to spin around in tight spaces. The robot needs a drive that will allow this. RR

One wheel arrangement being considered is a six wheel, three per side with a center drop, with or without omnis. R3 has used this configuration in 2008, 2009, and in 2011. Another configuration would be an eight wheel, four per side, with two center dropped wheels. This will allow the robot to turn in its own chassis length. Another attractive feature is this is a relatively simple and reliable chassis. Leaving the team time to concentrate on the auxiliary functions of the robot. RR

Kit of parts chassis is finished and taken to View Point for attachment of the controller testbed.

Practice Bot chassis is cut and drilling and milling of chassis rails begins. There is no 1.5” end mill bit for WCP gearbox block

I was in the back of the lab during school looking at the chassis which was made the day before, and while looking it over, Cooper, Mr. Riedinger and i all noticed that the chassis was not square at all. Both front tube stocks were at an angle, and the entire center portion was a rhombus not a square. Cooper and i started trying to fix the chassis with the gussets that were already there, and discovered that it was completely impossible to repair and we needed to make new gussets to hold it for welding. To try and prevent the same thing from happening, we clamped the tube stock to a table and used a long center-punch to drop marks for where the bolt needed to go. It took us almost 5 hours but we finally made all the gussets and mounted the chassis together with them. Right now we are just waiting for welding, but here’s a photo of the chassis while we made the last gussets and the clamping rig.

tested different designs for a new potential claw using a a "U" type design. wheels will will be attached like rollers at the end of it.

Got the robot back from welding, and there was a slight problem. the bar connecting the vertical piece to the form was wielded with an angle that is very apparent, though it is still straight, it is a little bit of an eye sore.

UPDATE: it is not possible to fix it without removing the welds, so we will have to go with it.

Need to decide which program will be used for the creation of parts and assemblies. Chassis team needs to see how the frame and wheel arrangement affects the ability of the robot to drive up the 15° platform ramps.

Issues getting Citrix to work and having enough licenses for everyone to work, spent the day troubleshooting and finally got citrix but it ended up being a single license for 3 members so the open page would just jump from computer to computer.

Viewpoint took today as a break and so all we had was the one citrix login from yesterday. Tried signing on and ended up stealing the page from another CAD member and spent the day waiting for them to finish and pestering Rush for more citrix logins

All of CAD team was here for the first time and we continued to troubleshoot how we can work together. Got one more login but in the end still shared a computer with Ayush while the rest of the team worked on an arm for Function. Cena worked on a chassis and it is nearly complete.

Mr. Rush had mocked together a basic chassis to be used as a jumping board for the CAD team. As this was the first time we truly understood who had a CAD responsibility, this convergence was of paramount importance, especially with respect to organization. Luca was assigned to the chassis, and Lily tackled the poorly defined lift. My main function today was to interface between the mentors’ requests from the last couple days and the newly cohesive team.

Cena finished the chassis CAD, and we started the practice bot CAD

CAD-ed the 15.35° incline ramp and parts for the footpad design. Also helped assemble the chassis.

Today I continued to work on assembling the chassis. I made a model for the 6in length of bumper to see if we had clearance for the 15 deg ramp, and confirmed we have a minimum angle of 17.21 deg clearance. I also made new pieces for the A supports of the tower, changing 1x1 to 1x2 part. I assembled the footpads to the tower, but now plans have changed. Footpads used to be 1x1 square tube, and now it is a ¼ in sheet of aluminum. The angles on supports also will change to whole numbers (21&89 deg). We also need to make special L brackets that have a 90 deg angle but the plate connecting has an angle.

Today was a productive day, as I was able to deliver multiple laptops with a working copy of SolidWorks. Again, my function was as a manager, assigning and assembling parts. Luca was the other main factor in today, nearing finalization with the critically important chassis, as the construction date is nearing, At the end of today, we were required to deliver many dimensions for the basic milling and cuts for the chassis.

I started working on a new version of the chassis. I removed the middle support so that we would have room for electronics as decided by Ayush and I, and assembled in the arm. After some math i was about to assemble in the diagonal supports, but then I was told that the arm was to far forward. Mr. Yao began doing the math for how the force would be distributed, and the idea to make all angles whole numbers is now out of the picture. I have a photo of the drawings Mr. Yao and i made, and it shows how the A supports will be offset. We also want to make some changes to the A frame which are: making them a sliding compound angle, making a box support under the arm sides instead of plates connected to the arm sides, and adding a support beam across the A frame. Also the center of mass and ratio on the lever arm are too far out and too big, respectively, and so i need to talk with Mr. Rush about changing that. I’ll work on all these changes tomorrow. 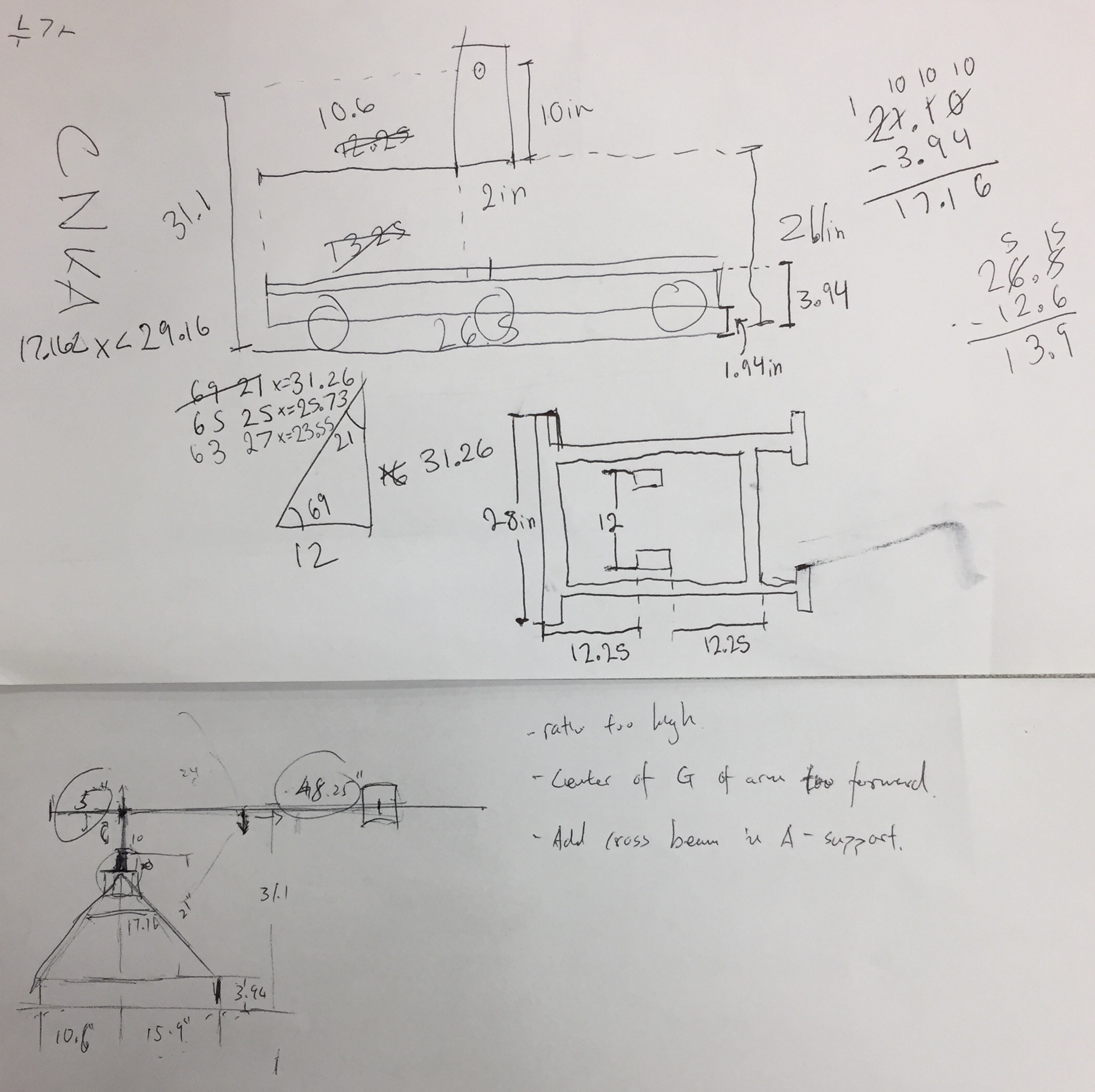 Today I was given an important job of CAD’ing the electrical board, the brain for the entire robot. After multiple discussions with Mr.Redhinger and Mr. Connor to finalize the components, I recruited Sammiboi to download the components. A basic sketch of a potential board was designed, but quickly rejected due to the weight gradient requirements. Monday will be an important day, as the electrical team will have to deliver a definite set of requirements, most of all Pineci. I also have been helping Lily with the lift, as it was entirely redesigned due to new dimensions.

I made up a part designating system with part numbers. This is applied to all parts that we produce or edit in anyway that makes it different. 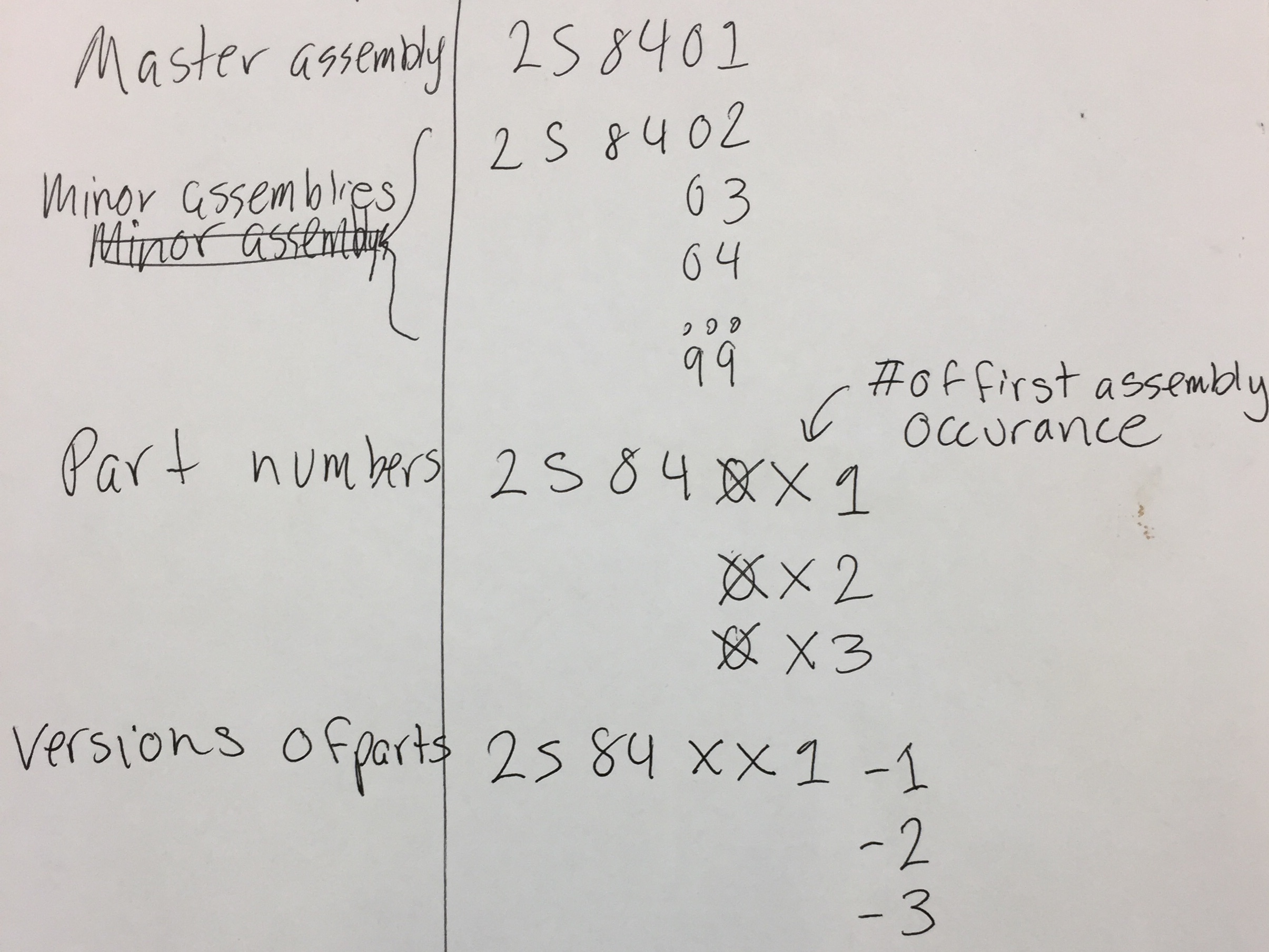 I had to go out and get some screws for Field Element so I didn’t do much on CAD today. I also milled out the back panel on the competition robot.