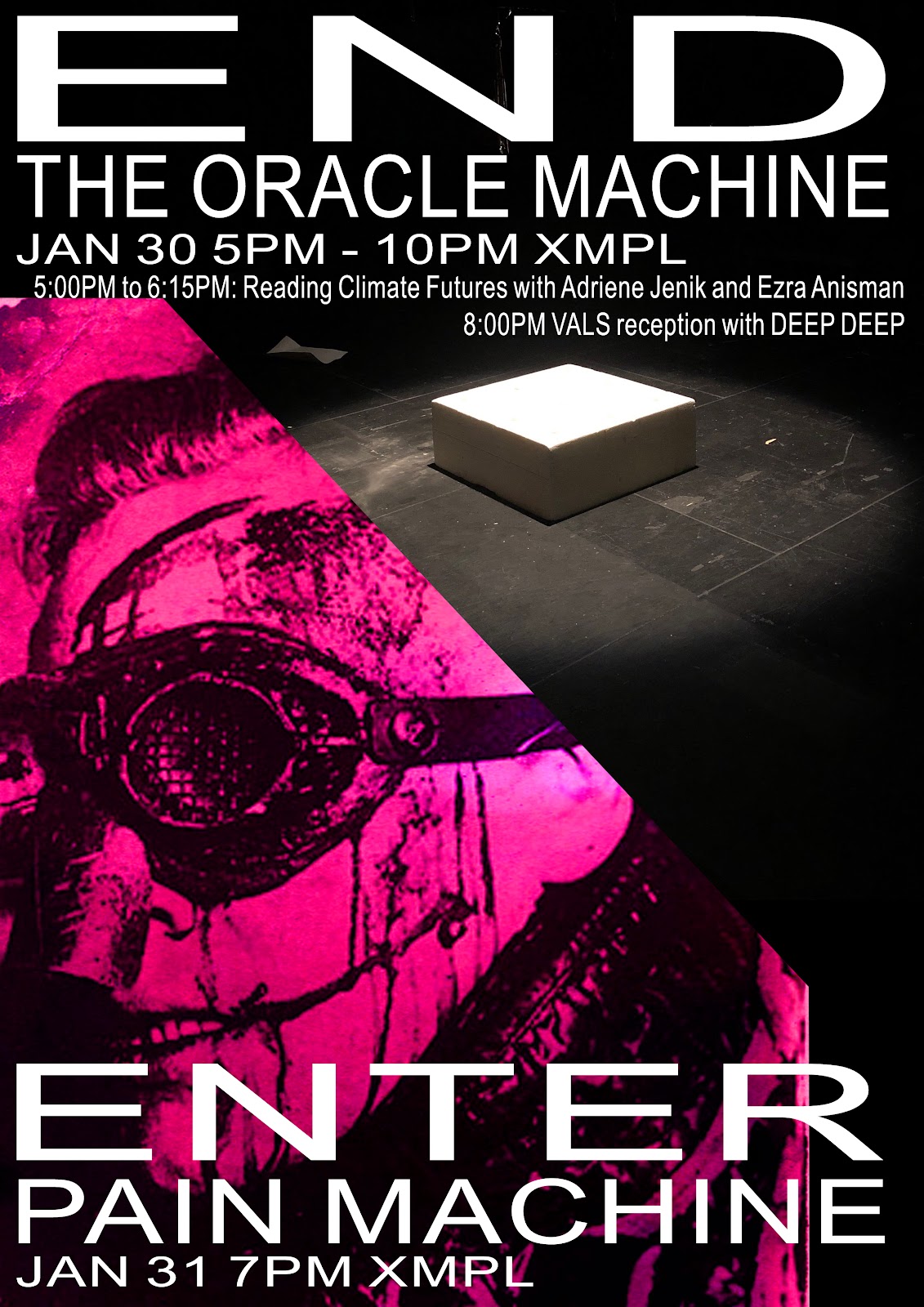 Claire Trevor School Of the Arts

During this 45 minute performance, 3 to 5 volunteers will be drawn from the audience to receive climate future readings that will be amplified and projected onto a screen for all to see. Sound design MFA Ezra Anizman will also “read” the symbolic nature of each card overturned and offer a soundtrack to accompany the reading. Through a feedback session after the performance, we will interrogate if the intimate exchanges of the one on one readings are able to be broadcast into the larger framework and retain or even extend their power. 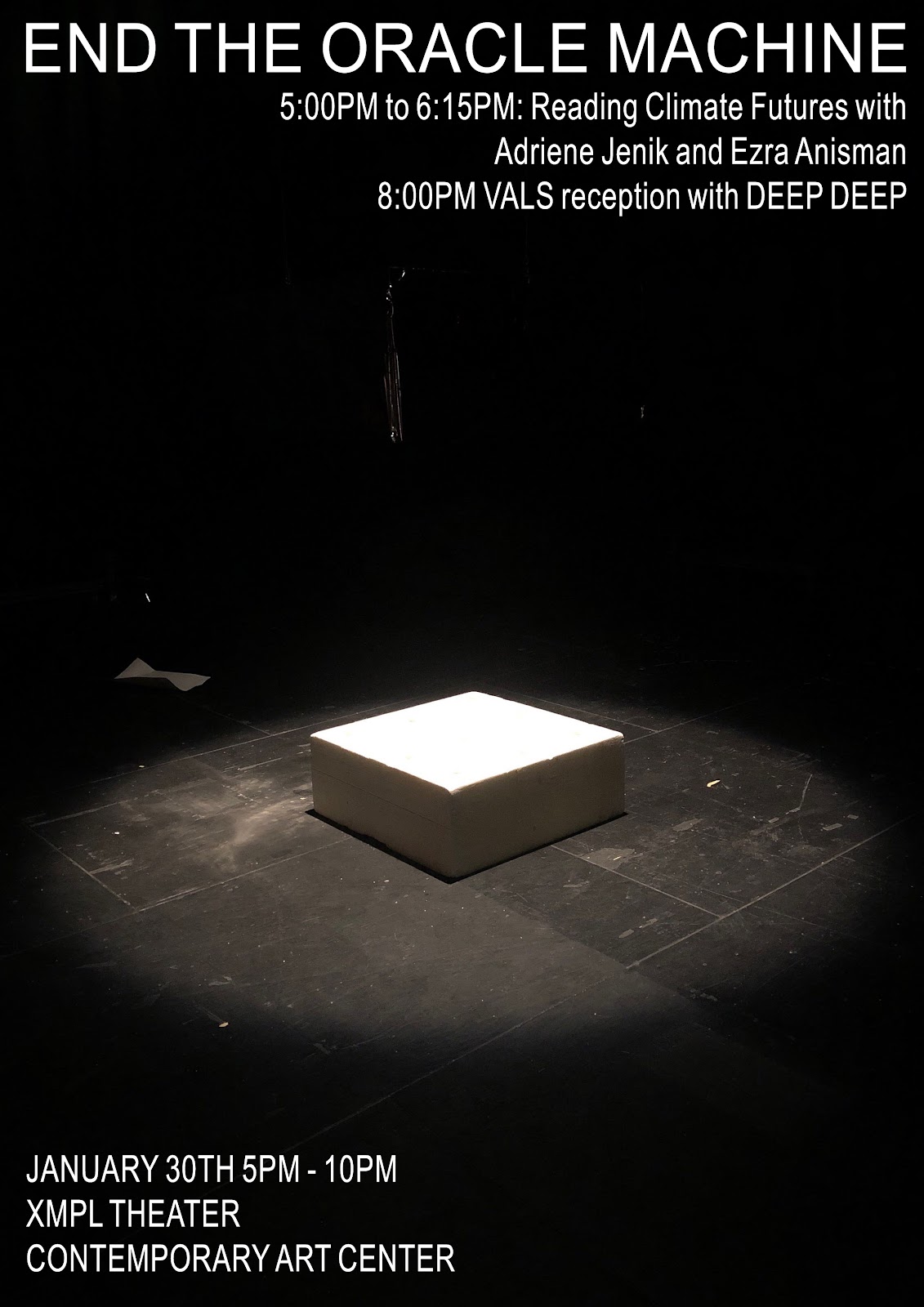 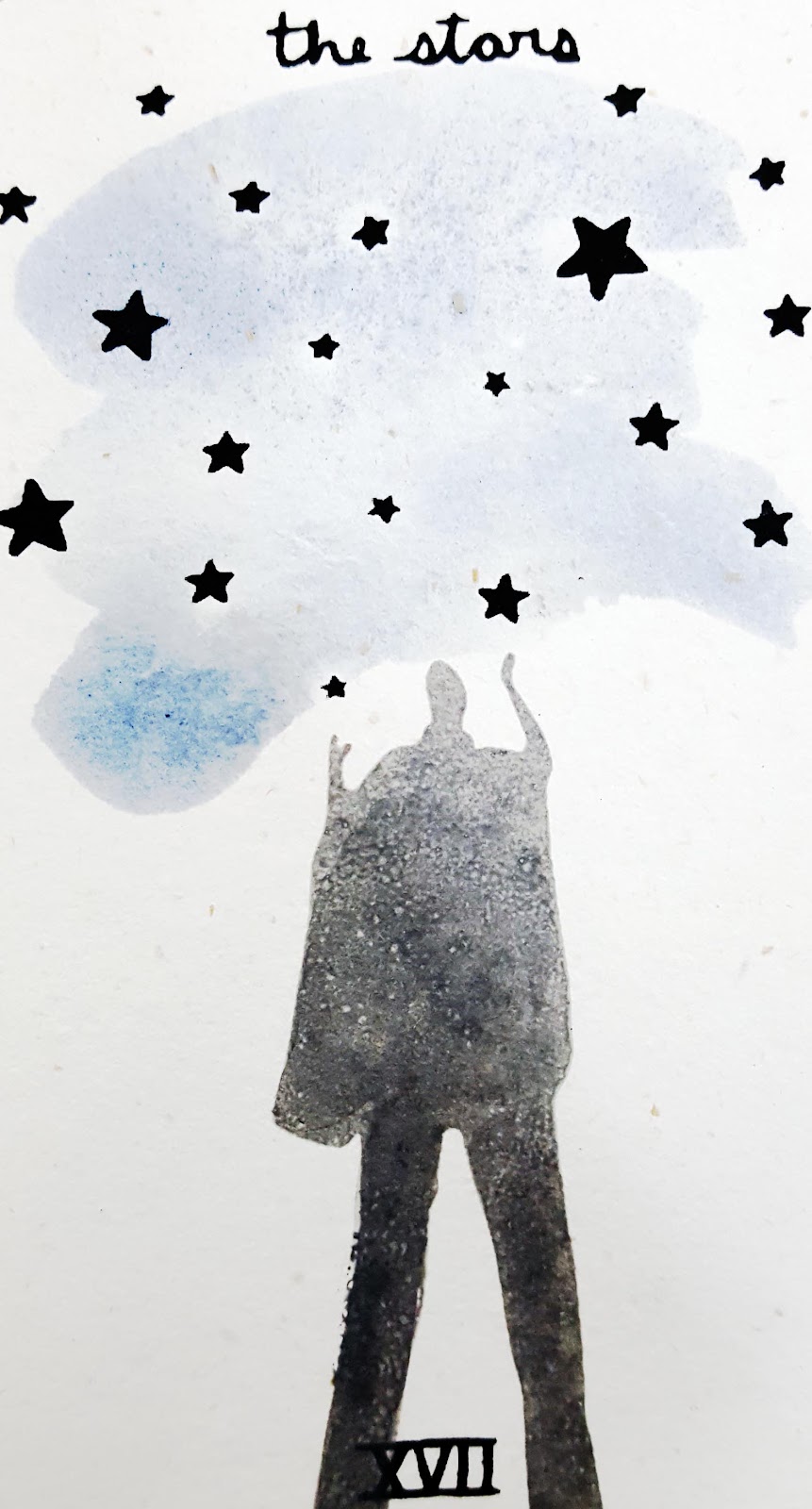 The question has been can we turn the Black Box Theatre into an Oracle Machine?

Gabriel [00:06:42] The Idea of an Oracle Machine is it shouldnt it shouldn’t be possible. Right. And so it’s just sort of a conceptual tool to think about what you would do if you had such a machine.

In science, computing, and engineering, a black box is a device, system or object which can be viewed in terms of its inputs and outputs, without any knowledge of its internal workings. Almost anything might be referred to as a black box: a transistor, an algorithm, the human brain or feelings.

One type of black box used in computer engineering is an Oracle Machine, an abstract machine used to imagine what would be possible if something that gave an instantaneous answer to an exponentially complex question could exist.

Gabriel [00:17:34] So for a lot of problems, a complete quantum computer is an oracle.  It allows you to solve things that would otherwise be inaccessible. And you can check very quickly that it's right.

At the oracle of Delphi, a priestess went into a trance, supposedly breathed vapors from a cleft in the rocks, and delivered messages from Apollo to persons who sought her advice.

Skene, (from Greek skēnē, “scene-building”), in ancient Greek theatre, a building behind the playing area that was originally a hut for the changing of masks and costumes but eventually became the background before which the drama was enacted. First used c. 465 BC, the skene was originally a small wooden structure facing the circle of spectators.

This is a proposal  to work in a dialogical practice. An open field. Layla asks if it is possible for us to exist in a state of that which is to be? She asks, how, through dialogue, to perform ethics? How to permit the future? [against the internet telling you what you are going to do tomorrow]. The difference between a goal and an orientation. 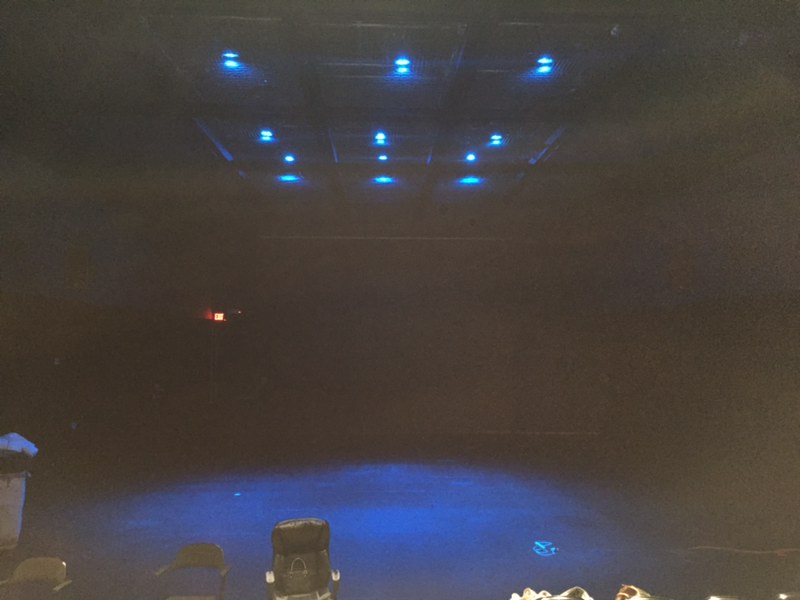 Data points are now worth more than oil. Contradictory survival tactics are key. 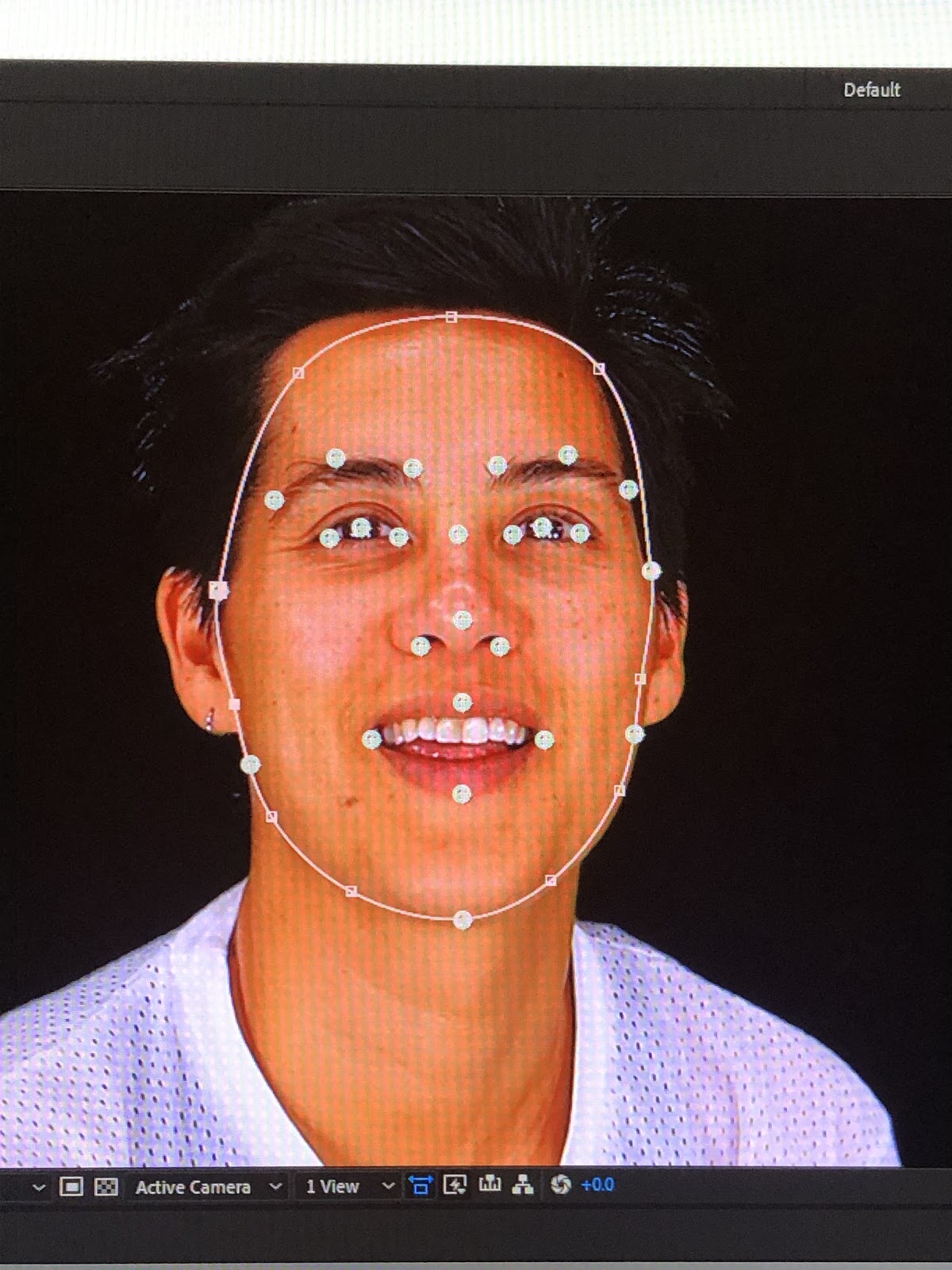 This is an invitation to people in any discipline to answer the question of “Can we turn the Black Box into an Oracle Machine?”  If you would like to answer the question in The Oracle Machine (dance, dialogue, video, music, text, sitting, test something out, experiment, whatever you want, by yourself, with others, with an audience, with no audience).

Be in touch with Gabby Miller (gabbymiller@gmail.com) if you would like to do something in the oracle machine.

with very special thanks to Bruce Warner & the XmPL Crew 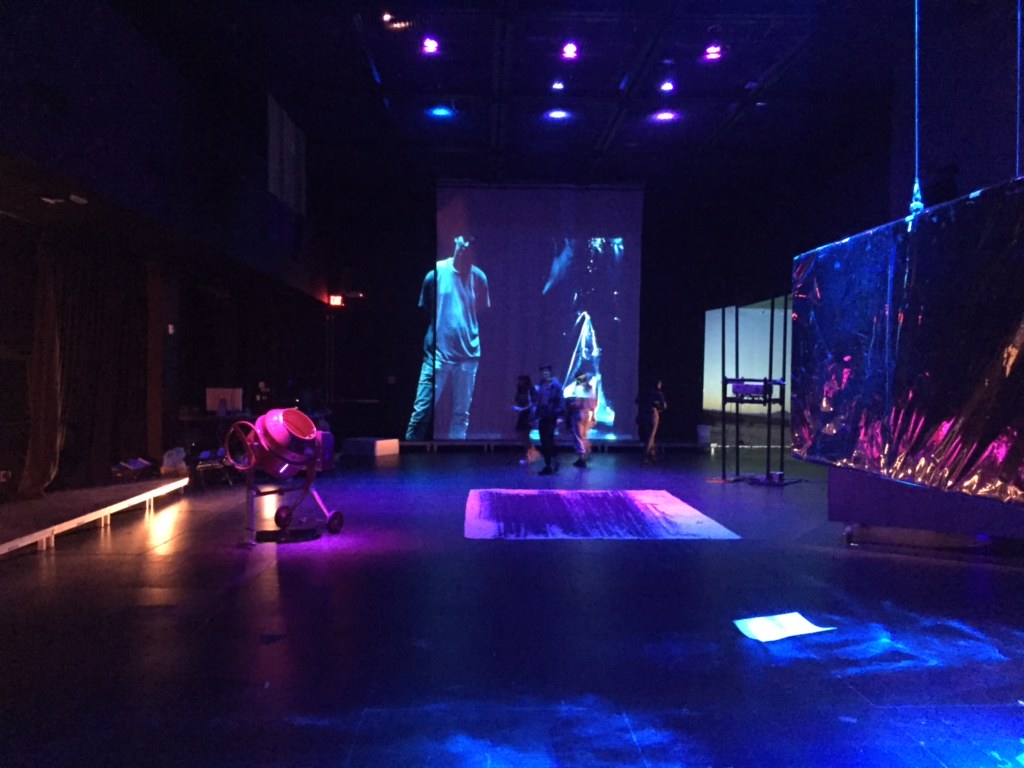