Minutes of the Annual General Meeting of Milton Outdoor Bowls Club held on 16th October 2019 at 19.00 in the Bowls Pavilion 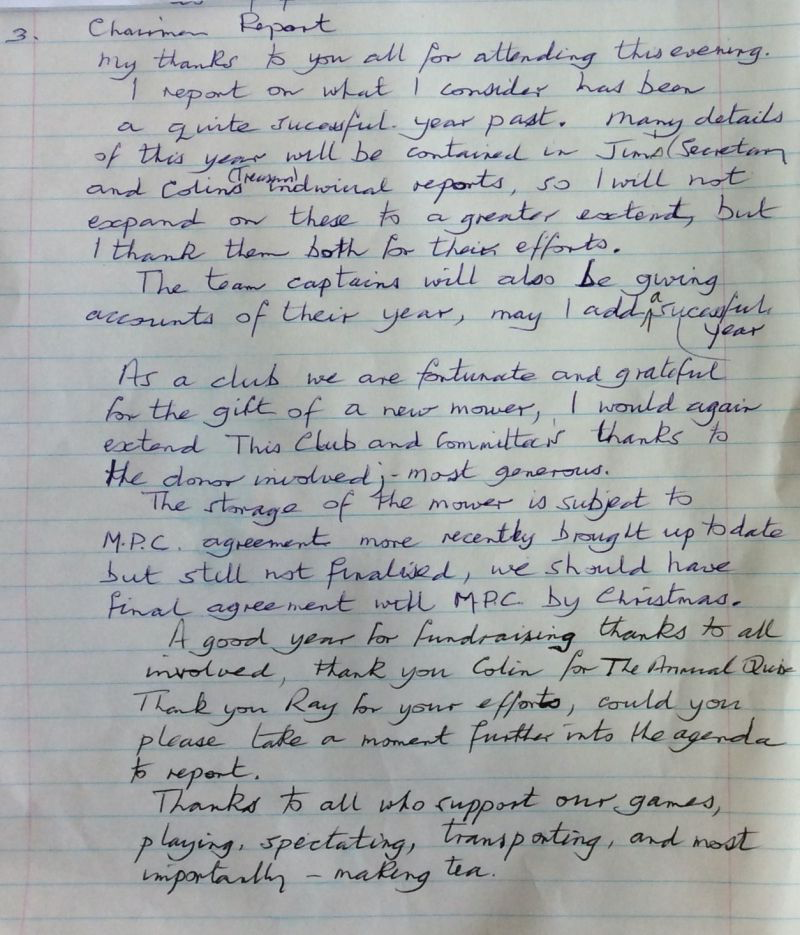 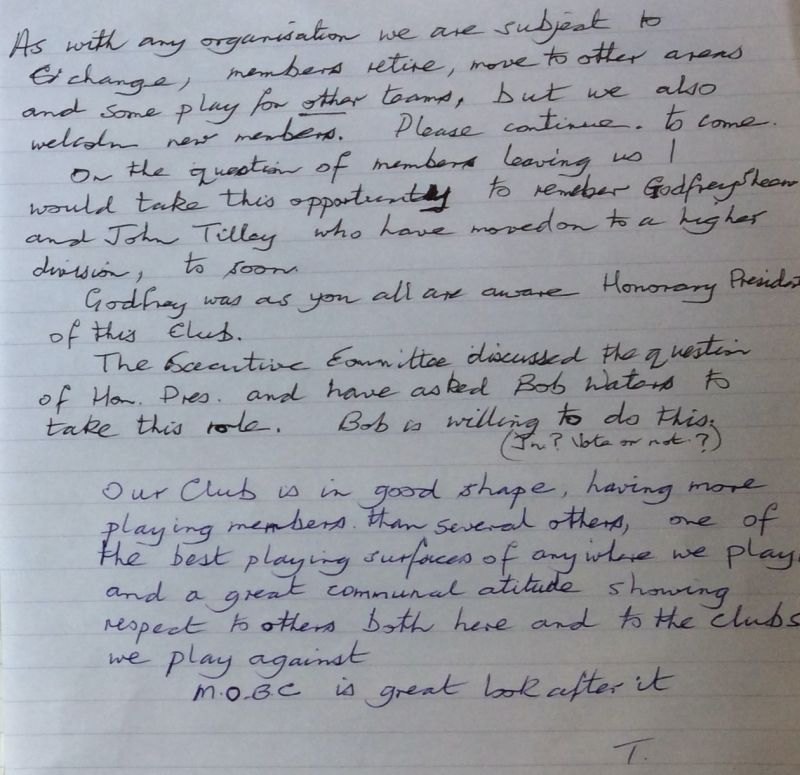 Minutes of the Annual General Meeting of Milton Outdoor Bowls Club held on 30th October 2018 at 19.00 in the Bowls Pavilion

Minutes of the Annual General Meeting of Milton Outdoor Bowls Club held on 18th October 2017 at 19.00 in the Bowls Pavilion

Minutes of the Annual General Meeting of Milton Outdoor Bowls Club held on 11th November 2016 at 19.00 in the Bowls Pavilion

Minutes of the Annual General Meeting of Milton Outdoor Bowls Club held on 11th November 2015 at 19.00 in the Bowls Pavilion

Minutes of the Annual General Meeting of Milton Outdoor Bowls Club held on 14th November 2014 at 19.00 in the Bowls Pavilion

Approved and signed by Chairman.

New floor was in place before 2013 season commenced. Thanks to Colin Nunn for his supervision.

Jim’s Shed and motif thereon was a huge success. Thanks to Edgar Stearn for his generous donation.

This was very short. He commented on the good season we had, largely due to the good weather, and          thanked the members for their support.

An enjoyable season. It was good seeing new players joining us. I trust that they will consider              playing league bowls in 2014. Congratulations to the following: - The Ely & District Team won the                Turner Cup. Business House Mixed won Division 2 and are promoted. Lorna; Pauline; (thanks to                Joy for substituting for Pauline in the final) Max and Bob won through to the BH and CD finals in             various competitions. I have emailed and put up notices about next years’ competitions. Please sign         up if you are interested in taking part in any of these competitions. Bob and I are investigating a                 possible sponsorship deal. (Ray Daniels gave a brief resume of what this may involve.)

Godfrey gave a short report on this year’s events and stated that we only ran six competitions   whereas for example Cottenham run 14. He confirmed that he would not be running these competitions next year. Grateful thanks were given by the meeting for all the years he had run these                events. It is anticipated that Jim will take over the running of the competitions.

John Herbert reported that the Wednesday afternoons were successful and in all at least 20 members           participated, with a regular appearance of our new members. Thanks to John, for his commitment in              running this event, of course remembering that he was ably assisted by Tony Lillyman. Due to Tony               passing away John will need a new assistant. Volunteer required.

Colin Nunn gave a comprehensive report on the Club’s finances and produced the accounts as         audited by Michael Spooner. Our current financial position is good; however Colin urged caution in                view of future expenditure. A copy of the accounts can be obtained from the Secretary or Treasurer          and can be viewed on the Club web site.

Bob Waters gave a resume of his report which is attached.

The following were voted in unanimously: -

30th November Quiz Night. Bob reported that unless more teams entered we may have to cancel the           event. At present there are six possible teams. Which if confirmed then the event will proceed in the          small hall at the Community Centre as advertised. Agreed to have a carpet bowls evening; Open              Day; Bank holiday Drives; Jumble Sale; 2014 Quiz Night. Arrangements and dates to be confirmed                 by the Committee.

Malcolm Duncan gave an update regarding the Club’s web site. We are very indebted to Malcolm for keeping such a professional web site. It was also thanks to Malcolm that the meeting had the         benefit of the agenda and papers being displayed on the screen for all to see, (including some          poignant pictures of those members that we have lost) whilst we had the minutes silence at the beginning of the meeting to remember them.

Bob welcomed all to the meeting and asked for a minute’s silence to remember George Davis, Bernard Frost and   Olive Brooklyn, wife of Doug.

How quickly a year goes especially when you have such great support from members. I wish to thank especially our Secretary Godfrey who is retiring from the post. He has been a tremendous ambassador for the Club. It is thanks to him for his hard work and diligent attention to detail over many years that the Club has been run so efficiently. However assuming that my proposals for amendment to the rules for managing the Club go ahead I wish to propose to members, two things: -

(a)        That Godfrey is made our first Honorary President.

The two proposals above will be dealt with under items 10 and 11 on the agenda.

I wish to thank Colin and Terry for keeping our finances in order; the Committee for their efforts in keeping the Club running smoothly and also Malcolm Duncan who has done a grand job managing our website, I trust you have been using it!

As regards the playing season we had mixed fortunes but I must impress on the Club that our Captains in their own style did a fantastic job in organising the teams. Without them we would be in a sorry state. They have all intimated that they wish to continue in post and I ask that all members give them full support for the forthcoming season in what is a difficult task.

The new Committee will be looking for ideas in relation to fundraising. In the New Year we will be organising a jumble sale and a quiz night, dates not yet fixed.

This season was notable for some very wet weather. In March it was warm and dry, so much so that we could have bowled for the whole month. I was watering regularly and used more water that month than the rest of the season. For the first time that I can remember we had to abandon the Finals day on the Saturday half way through the games as the green was flooded, and the remaining games were played on the following Sunday.

Grateful thanks go to: - Terry; Tony L; David W; Roger; Trevor; Ray; John H and Kevin for helping to cut the green during the season. Jim has volunteered to join the cutting rota next season. The more volunteers we have means the fewer times any one person has to cut the green.

Our Contractor Chris Hunt has continued to give a good service. The green was put to bed earlier than normal at the beginning of September. The green has greatly benefitted from this as the grass germination was greater and the green looks in better condition than in previous years.

A big improvement next season will be the provision of ‘Jim’s shed’.

Many thanks to Edgar, who has provided the shed, installed and refurbished it. This means that when we spring clean the Pavilion in April that we can move all the bowling equipment into the shed and free up the changing room. It will also make the job of setting up and clearing away the green on match days much easier.

Thanks to Gordon who painted the gates, the new bench and has also offered to paint the inside of the shed.

For the Treasurers benefit I will be sending the mowers for service to Pecks of Ely in December as usual.

The Secretary ran through the various meetings he had attended &

explained any items which were relevant to the club. In particular

The Treasurer outlined the financial situation of the club & went

through the more important items in detail. Balance Sheet issued at

the contract had been in operation for 2 years. A report on the above

was handed out at the meeting.

Committee Meeting. No coaching sessions were organised for the 2012

Carry on as in previous seasons.

Firstly I must thank you all for coming here this evening, one person is missing

this year, sadly Colin Barkham passed away last April, and in his memory I

Competitions wise it has been a very good year, with many successes in the

promotion to Div. 1. They needed 3 points to obtain this in the last game

against Coleridge and got 7.

Cup, and finishing in the middle of both parts of the league.

Tonls Ely and District team had a similar season and enjoyed the league.

Bassingbourn Ann Brown and Graham Parish 21- 8. In the mixed league

to Cath. and John Locking.

I must thank Lorna, David, Malcolm, Tony and Jim for captaining the league

teams. It's not everyone's cup of tea, and we are all very grateful for their hard

Thanks to Trevor organising coaching, we have been able to recruit 5 or 6

prospective new members, which is very important with all of us getting older

.and less able to play.

I must thank all of you for your help, Godfrey as he knows all that's going on

and works tirelessly organising the competitions attending meetings on our

behalf, cutting the surrounds, and organising this dinner and presentation

played this year. Len who is our resident carpenter, Colin who sees to electrical

problems and with Margaret does the surrounds, and all of us who cut the

Tony Hodge tells me that he is giving up his position as treasurer at this AGM,

and we are very grateful for the hard work he has done over the past 10 years.

Some of our members have not enjoyed very good health this past year, and I

hope that they are soon back to full health.

Once again thank all of you for your help over the last year,