At the end of the evening, players receive points for every player’s score they beat on each of the ten pinballs.  These points are then added together by the Flip Out team and produces an overall total and rankings for the league week.  Each month, your two best weekly performances are counted.

Every participant will automatically gain World Pinball Player Ranking (WPPR) points at the end of the month.

NOTE:  There are only 511 currently ranked Pinball players in the UK - just by entering the league once, you will gain an official UK Pinball Ranking in the top 500.  Why not give it a try and see how your scores compare against your friends or others?  It is also a great way to improve your pinball and help our hobby grow - as of Nov 2021, there are around 85000 registered Pinball Players worldwide.

Both Guests and members can enter, or just play the other games if not competing.

The Tournament is organised by our good friends at…

The exciting arrival of Godzilla Pro to Flip Out was the talk of the town this week. The latest Stern offering designed by the Pinball GOAT (Greatest of All Time) Keith Elwin – Godzilla played fast and proved a tricky beast for everyone, with most players unable to post any significant scores apart from last month's champion, David Tucker (363M) and Anton Stewart (234M).

Huge thanks to Neil McRae for arranging this – it really is greatly appreciated by everyone at the club.

Back to this week's league recap – a tremendous performance by the UK's number 18 Bigdave Fowler led him a first place finish. Fowler was spotted getting in some valuable practice at another venue earlier in the week, and this clearly paid dividends with a number of superb scores, headlined by a monster 652M on Tommy, 210M on Led Zeppelin, and 914,720 on Space Shuttle.

Matthew Vince booked a playoff spot with 3rd place for the second straight week (Robot - 3M), and David Tucker came 4th helped by his high score on Godzilla. If Tucker is able to attend next week he has a strong chance of making the playoffs and will surely be looking to repeat as monthly champion.

Stan Simpson smashed Led Zep for 612M and Spirit for 654,720 to take 5th, with Nick Hamill and Graham Swaffield taking 6th and 7th. Yuen Aw was unable to reproduce his recent form after a last minute entry and took 8th position.#

At the other end of the table, unfortunately Elvis did not fly in on a dinosaur and the valiant Ben Leigh was unable to meet his target of a top half finish. However – there is always next week and the beauty of pinball is that anything can happen…

Most of the usual contenders are in prime position for the playoffs but one strong performance from anyone next week could shake up things up at the top and make things interesting! 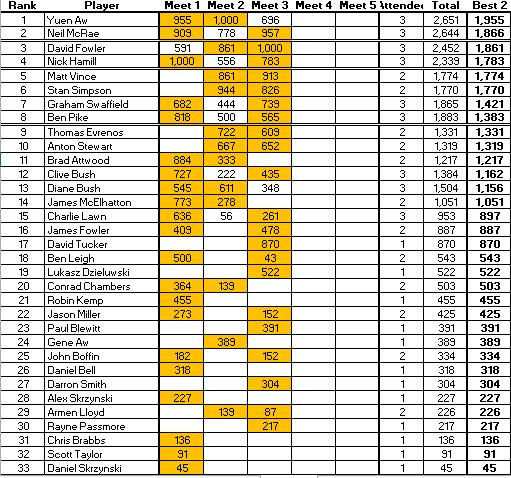 A smaller but high quality field of 18 players turned up for Flip Out league this week - with some of the big guns returning to the fray as expected.

Yuen Aw managed to put up one of the best performances of his pinball career to top the league this week. Aw took top score on 4 machines - aided by some excellent games on the Classics - usually his Achilles heel. Highlights included Skateball (958,640), Genie (392,290) and Avengers (179M). Rumours Aw spent an entire year during the pandemic locked in a room with just a TMNT pinball for company are as yet unconfirmed.

In 2nd place was the veteran and world number 255 - Stan Simpson. Fueled by the unintentional slight in this column last week where he was missed off the initial list of absent top players he played like a man on a mission, posting a massive 967M on demolition man and a huge score of 1.28M on the tricky Alien Poker.

The skilful David Fowler and ever present force of Matt Vince tied for 3rd place honours. Fowler posted an excellent 791M on Roadshow and was overheard gleaning words of wisdom on championship mentality from last week's winner Nick Hamill which clearly made a difference. Matt Vince posted a big 286M on the Walking Dead but was far from pleased with his performance on Skateball.

Also less happy with his performance and the scoop that denied him Monster Bash multiball and a likely higher finish was Neil McRae in 5th (Addams Family - 110M). "A dead cat could have beat me tonight." he quipped. "...But at least I beat Anton and Thomas!"

The aforementioned Thomas Evrenos scored well on most games to take a creditable 6th whilst "Combo King" Anton Stewart shook off the rust after a few absent weeks to take 7th.

Rounding out the top 8 was Diane Bush who destroyed Batman Forever with a superb 1.47 billion points.

Looking at the other end of the table some unfamiliar names were present - including Brad Attwood who in his own words "made up the numbers this week". Charlie Lawn in particular was very unlucky to come bottom having scored a fantastic 1.2 billion on Batman Forever himself. With two weeks left there is still plenty of time to bounce back and move up the table, or challenge for the playoffs. The playoff spots are currently being held by Aw, McRae, Hamill, Fowler, Pike, Attwood, Diane Bush and Swaffield. 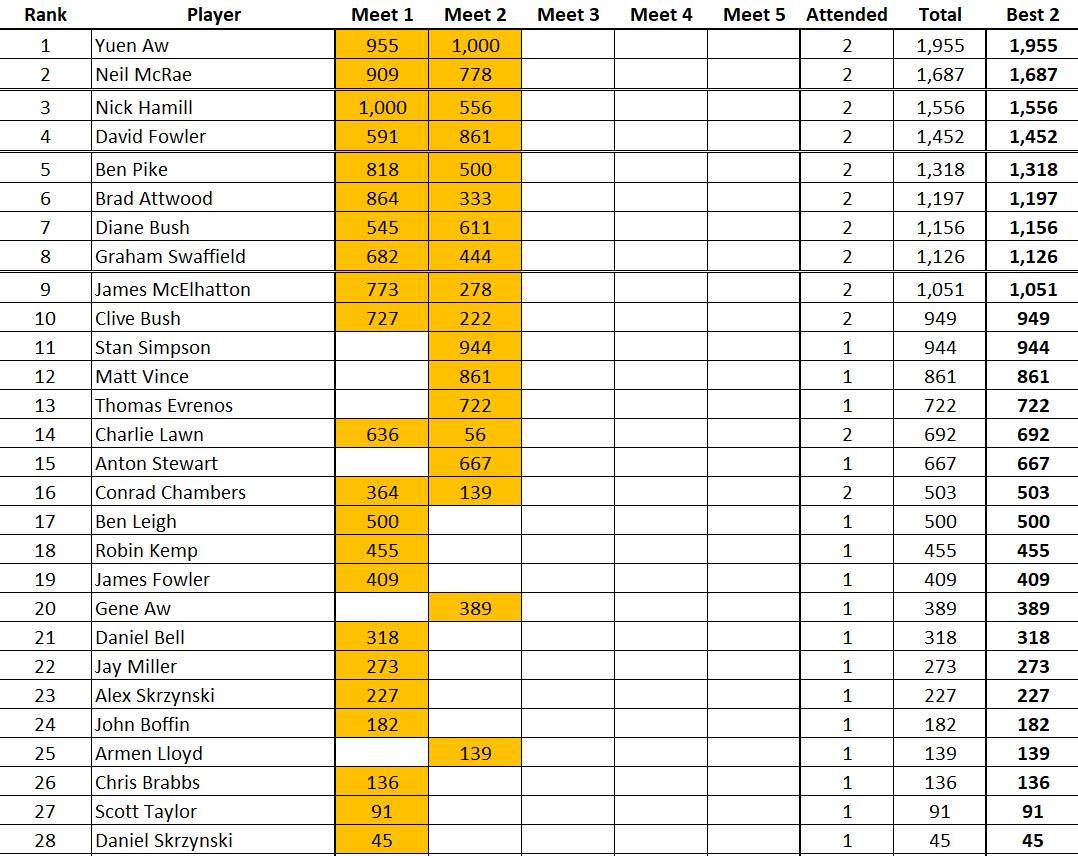