The Tale of the Calli Clan, Nigerian Dwarf Does, Extraordinaire

It is a dark and stormy night -- well, not stormy, but a cold one in late February. Calli, a lovely tri-color buckskin doe, has labored fitfully since late afternoon. The farmer sits with her for hours, concerned as the day falls into night with no progress. Having midwifed only successful kiddings prior to this, the farmer is inexperienced and does not know what to do. At about 11 p.m., she calls the vet, who responds brusquely, she should not have waited so long, the only option would be to drive the goat to her office (45 minutes away) and she would perform a c-section -- or put her down. The sharpness of the vet’s rebuke brings tears to the farmer’s eyes as she slides the phone into her pocket.

Nausea seizes her gut. The logistics of moving this large animal that does not want to move, into a minivan is overwhelming. The long drive for an uncertain outcome is equally daunting. But the thought of losing her is also too painful to consider. She had hoped the vet might come to the farm, but the vet was clearly unhappy having been awoken to a situation that she felt should have been dealt with hours earlier.

As a last resort, the farmer calls her more experienced friend, who, without hesitation, races into the night to help her. She swiftly determines that a kid is turned sideways, blocking the birth canal. Calli would soon die without intervention. In the darkness of a barn without electricity and minimal lighting, her friend repositions, then pulls the first kid -- a large buckling that does not survive. Four (yes, four!) more kids are still inside, but Calli is too weak to push them out on her own. The farmer’s friend pulls them out one by one.  Two are weak, but alive, and two are tiny and malformed, clearly having died weeks before Calli went into labor.

Calli, having been a single, born to the herd queen -- a true princess of Oly Ridge Farm -- had been doted upon and only knew comfort, protection and privilege. She responds to this traumatic experience by choosing one, and one only, of the two surviving doelings: the golden one, Clare. The black doeling, Dancy, barely survives the ordeal of birth. She is tiny and showing no signs of pulling herself up on wobbly little legs like her sister. The farmer knows that she will not make it through that cold, dark winter night so she whisks the precious package into the warmth of the house, dries her and, with the help of her daughter, drips precious drops of colostrum into her mouth. In alternating shifts, mother and daughter rub the tiny rag-doll of a doeling for several hours until she decides on her own to fight for her life. As morning dawns, spunky, two-pound Dancy stands, at first tenuous, then strong on her little legs, ready to face the world. The farmer returns her to Calli, who is still too exhausted and deep into her own recovery to take much notice of either doeling. The farmer gently administers herbs to Calli for strength and vitality while baby Clare, bright and strong with a full rumen of life-giving colostrum, welcomes her sister and together they curl into a round ball of warmth and peace.

Soon, however, a dark cloud settles over Calli. Perhaps as her vitality returns the memory of that dreadful, agonizing birthing experience is too much for her. Perhaps she feels she cannot support two kids physically or emotionally after what she’s been through. She is, after all, the Princess and these creatures were the apparent cause of nearly unbearable pain that almost killed her! As she emerges from the shock and stupor that followed the terrible night’s events, she considers the small goat-like creatures lying near her. The gold one had helped ease the pain and pressure in her udder, but the black one… the black one. Where did it even come from? She decides it must go despite of the farmer’s insistence that it stay, that she allow it to nurse.

Dancy persists at the teat, and the farmer tries to help by holding her mamma as still as she can. But Calli is stubborn and kicks away from the hungry baby. Soon she is head-butting her, flipping her into the corner of the stall, so the farmer must rescue her from her mother. The farmer tries herbs to spur Calli’s mother-instincts and calm her anxiety, but in the end, she must separate daughters from mother for Dancy’s own protection. Soon a bottle from the farmer becomes this pint-sized goat’s best friend as Calli is just not able to find it within herself to be a mamma to two.

As Dancy and Clare grow, they spend their days and nights together. Clare enjoys mamma’s teats and life-instructions while Dancy hangs in the shadows, gleaning what she can, while she practices her jumps, leaps and skips as only a baby goat can do (especially when farmer arrives with her bottle).

Dancy is joyful and spunky while the more refined Clare is doted upon as a princess. Each day when Clare is granted access to mamma’s milk, ever-persistent Dancy tries (because hope always springs eternal). But Calli always says no with a firm head-butt in Dancy’s direction. Dancy learns to quickly dodge and bounce away from the rebuke. She loves life in spite of her mamma’s rejection and grows up to be a favorite of the humans around Oly Ridge Farm. She has a way of connecting, of gazing deeply into their eyes and stretching her neck towards them in what becomes known as a Dancy Kiss.

As adults, the Calli Clan at times is broken up. Both Calli and Clare move away for a few months at different times. When Clare leaves early one winter, Dancy mourns the loss of her sister so deeply, she sheds her winter coat long before spring. The farmer learns that Clare does the same thing at her new home.

When all are once again reunited at Oly Ridge Farm, Calli finds herself warming up to the Black Creature, who is maybe not so bad after all. She is clearly one of her own, and makes a great cuddle partner -- even better than the gold one who always acts a little too much like an entitled princess (she cannot begin to imagine where she learned that behavior!). When it comes to matters of the rumen, though, not even the golden child is allowed to consume more sustenance than her! She is the First Princess of Oly Ridge Farm, after all, even though her mother the queen has long been gone. Calli knows she is not queen-material and is happy to leave that job to someone else, but that does not matter. No member of the herd, a kid of hers or not, can be allowed to presume to push her away from the choicest morsels.

As time goes on, the Black Creature, Dancy, who always lets her sister have first crack at the dinner bowl, takes her place at the left flank of Calli on her self-designated throne. Together they oversee matters of the barnyard or sun themselves by the gate on warm afternoons.

One kidding season, Clare is blessed with quintuplets -- a feat which brings her fame if only for a brief moment in time, but only strengthens her air of entitlement. After her kids moved on into their own lives at new farms, she remembers her fondness for her sister, and tolerates her mother once again, though the two are never quite as close as they once were. But even so, today at Oly Ridge Farm, they can be found relaxing together as only family can do, in happiness, peace and comfort, enjoying the sweet spring grasses, seasonal shrubs, and doting of the farmer. Alas, though the aging farmer dearly loves Calli, Clare, and Dancy, she finds herself unable to fully manage the workload she once found easy. So, she prays for a kind farmer with a beautiful farm to adopt her three girls and dote on them as she has done all the days of their lives. The story is still being written. 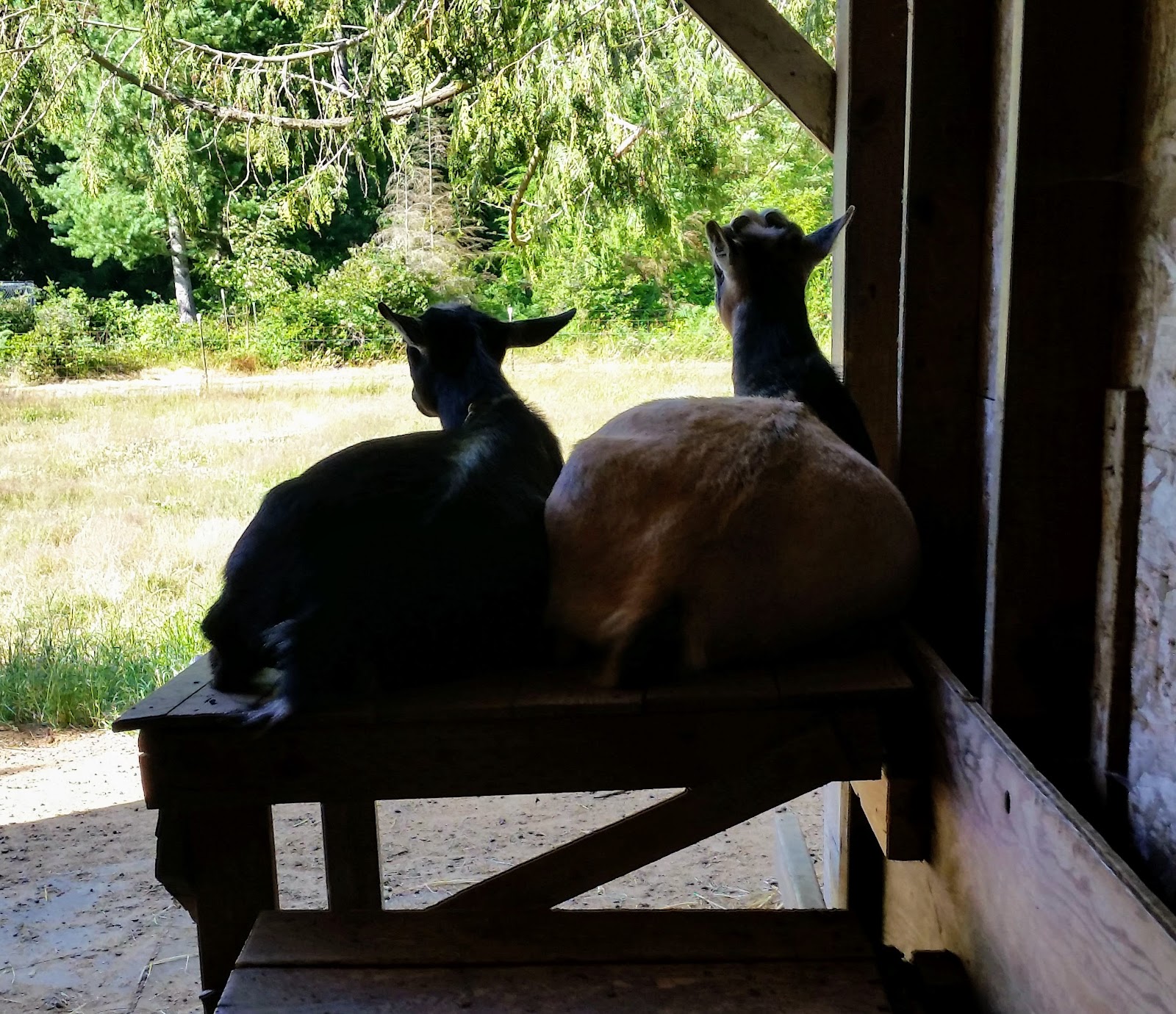 Dancy and Calli oversee the matters of the barnyard.