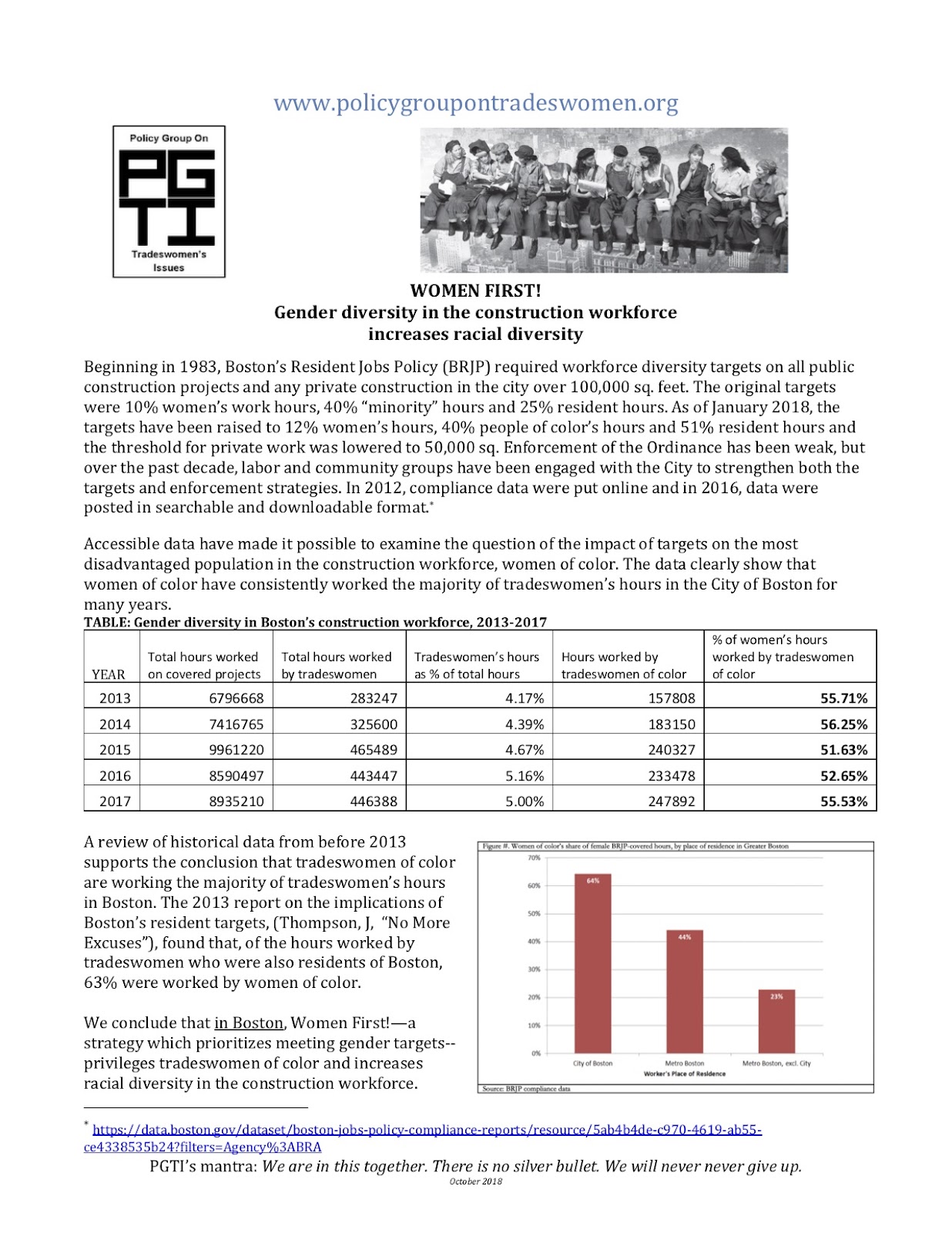 Beginning in 1983, Boston's Resident Jobs Policy (BRJP) required workforce diversity targets on all public construction projects and any private construction in the city over 100,000 sq. feet. The original targets were 10% women's work hours, 40% "minority" hours and 25% resident hours. As of January 2018, the targets have been raised to 12% women's hours, 40% people of color's hours and 51% resident hours and the threshold for private work was lowered to 50,000 sq. Enforcement of the Ordinance has been weak, but over the past decade, labor and community groups have been engaged with the City to strengthen both the targets and enforcement strategies. In 2012, compliance data were put online and in 2016, data were posted in searchable and downloadable format.*

Accessible data have made it possible to examine the question of the impact of targets on the most disadvantaged population in the construction workforce, women of color. The data clearly show that women of color have consistently worked the majority of tradeswomen's hours in the City of Boston for many years. TABLE: Gender diversity in Boston's construction workforce, 2013-2017

Figure Women of color's share of female BRIP-covered hours, by place of residence in Greater Boston

A review of historical data from before 2013 supports the conclusion that tradeswomen of color are working the majority of tradeswomen's hours in Boston. The 2013 report on the implications of Boston's resident targets, (Thompson, J, "No More Excuses"), found that, of the hours worked by tradeswomen who were also residents of Boston, 63% were worked by women of color.

We conclude that in Boston, Women First!-a strategy which prioritizes meeting gender targets-- privileges tradeswomen of color and increases racial diversity in the construction workforce.

https://data.boston.gov/dataset/boston-jobs-policy-compliance-reports/resource/5ab4b4de-c970-4619-ab55ce4338535b24?filters=Agency%3ABRA PGTI's mantra: We are in this together. There is no silver bullet. We will never never give up.