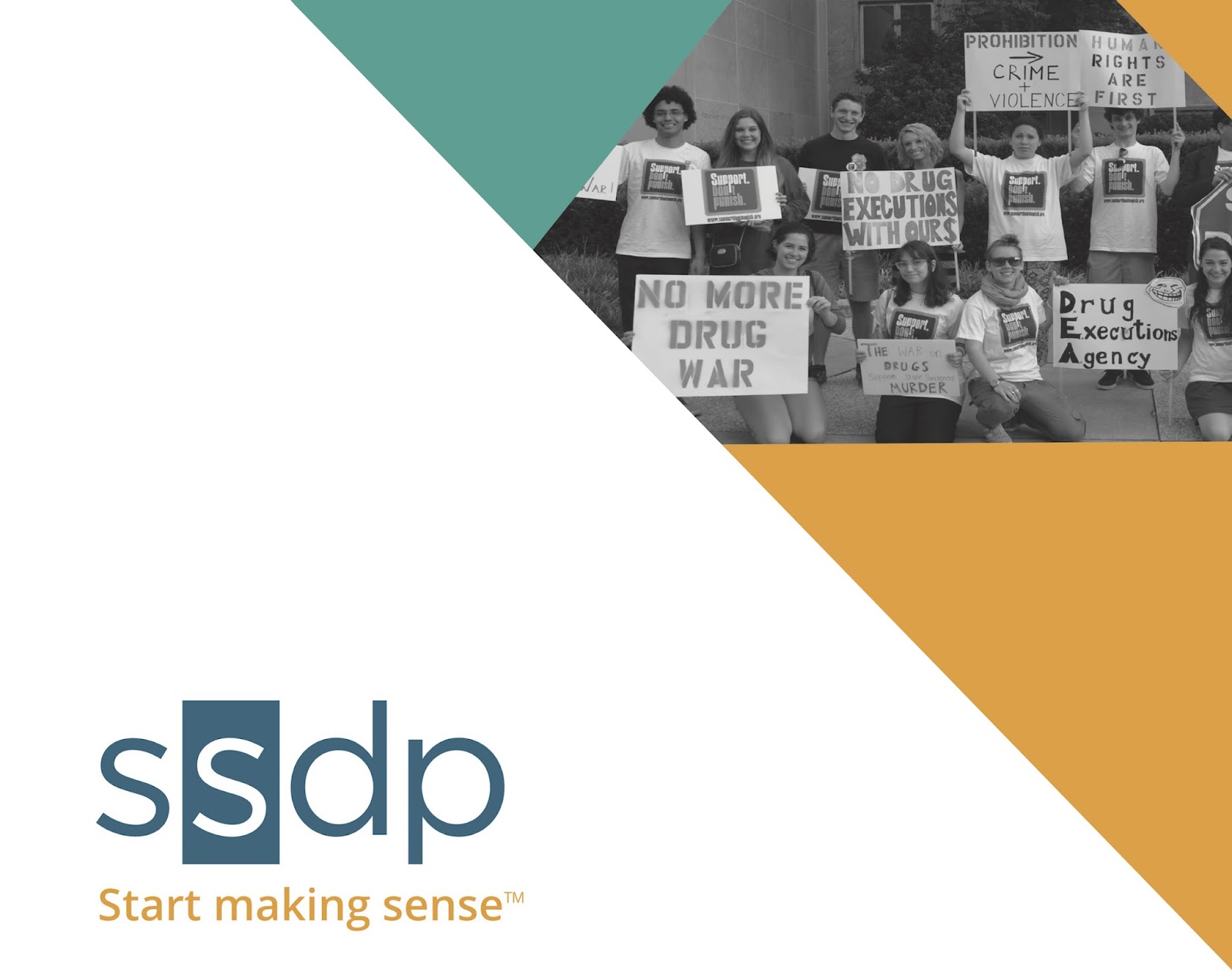 Ending the War on Marijuana

Marijuana prohibition has failed -- individuals across the political spectrum can agree on this.

SSDP neither condones nor condemns drug use, rather we respect the right of individuals to make decisions about their own health and well-being. We encourage honest conversation about the realities of the drug war. SSDP respects the diverse experiences and identities of our constituents. We develop leaders who advocate for policy changes based on justice, liberty, compassion and reason.

Drug policy in the United States has always been used as a tool to target and oppress specific groups. The first anti-marijuana laws were enacted in the early 20th century and, in the United States, were originally directed at Mexican migrants and Mexican Americans. On August 2, 1937, the Marijuana Tax Act was ratified by President Roosevelt, effectively commencing federal marijuana prohibition.

By 1937, several other countries had banned cannabis use, possession, or trade despite its widespread acceptance as a medicine; many more more would follow. international cannabis trade was restricted for the first time under the International Opium Convention of 1925 and, with the ratification of the 1961 Single Convention on Narcotic Drugs, the United Nations set the first punitive measures against nations that allowed use of cannabis for anything other than scientific or medical purposes.

In the US, marijuana prohibition was escalated in 1971 under the Nixon administration in response to the period of social upheaval in the 1960s when marijuana and other drugs became associated with a variety of social justice movements, particularly the anti-war and civil rights movements. Under the Nixon administration, marijuana was categorized as a Schedule I substance, a label used to indicate substances that have a high potential for addiction and no medicinal value. The 1980s and 1990s marked the beginning of what we now know as the “War on Drugs.” Under the Reagan administration, drug use increasingly became associated with poor people of color, and mass incarceration and law enforcement began to skyrocket. Further, just as marijuana accounts for the vast majority of illicit substance trade and consumption, marijuana prohibition accounts for the largest -- some say foundational -- enforcement of the War on Drugs.

Efforts to attach the use of cannabis to racist stereotypes are well-documented and used to criminalize, marginalize, or otherwise violate the human rights of those who use, produce, or trade in cannabis. In the US, these efforts have been deemed “The New Jim Crow” because they have been so effective at continuing the economic and social marginalization of Black communities and other communities of color. Around the world, nations have participated in the dehumanization of their own citizens by allowing or conducting eradication campaigns, criminalizing users and producers of cannabis, and stripping indigenous communities of their medicine or religious sacrament.

And for what? Cannabis prohibition has utterly failed in its stated goals. Eighty years after federal prohibition began in the US, it has proven to be a failure and is being dismantled around the world.

1973 Personal possession is decriminalized in Oregon

2016 Canada announces intent to legalize cannabis for adult use

SSDP chapters provide the ground forces and the teams of volunteers for many large state and federal campaigns. Our strength as an organization and what we bring to the table for these types of projects are our vast numbers of motivated activists and our ability to reach a large voting bloc of young people.

Outlined below are the different types of marijuana campaigns and how to most effectively help push each one forward:

This policy can be implemented at the campus, local, or state level and should include a public opinion and education campaign.

Devote one chapter meeting to educate chapter members and the community on marijuana and marijuana policy and what they can do to change it. Here are some steps to a successful meeting:

Write a Letter To the Editor (LTE) about the importance of ending marijuana prohibition. Since both the public and policymakers get information about public policy issues from the news, you should work with the press to get positive coverage of your chapter’s efforts to reform marijuana policy. One of the easiest ways to get press is to write a Letter To the Editor (LTE). The Media Awareness Project is a clearinghouse for LTEs about the Drug War, and has sections specifically for cannabis. It is user-friendly, and offers tips on how to write a LTE.

Individual SSDP chapters are most effective at changing policy on the state and local levels. Local chapters can directly influence local policies by helping to raise awareness and support for ballot initiatives and legislation at the local level. While federal marijuana policy is important, state marijuana reform is indicative of the changing attitudes toward marijuana across the country. State marijuana reform can also demonstrate the success decriminalization, medical marijuana, and taxation and regulation policies and influence later federal policies. Students and chapters can help to support state and local marijuana policy reform by supporting legislation and ballot initiatives for decriminalization, medical marijuana, taxation and regulation, and lowest priority enforcement policies.

Decriminalization: Decriminalization means that first-time possession of a small amount of marijuana for personal consumption will not result in prison time or a criminal record.

Medical Marijuana: Medical marijuana policies allow for patients who use marijuana for treatment to do so without fear of arrest or imprisonment.

Taxation and Regulation /(Legalization / T&R): Taxation and regulation allows adults to legally possess and use marijuana through a regulatory framework that places restrictions on the suppliers and consumers of marijuana, much like current alcohol policies do.

To get involved marijuana policy reform in your state, first find out if there is already a campaign or effort in the works. The Marijuana Policy Project has state-by-state information on campaigns and efforts here: http://www.mpp.org/states/ Once you’ve found the efforts or campaigns for your state, connect with them and offer your support.

Students can generate support for the bill through action centers and through social media. SSDP’s action centers are here: http://ssdp.org/action/ and if there are bills or policies you’d like SSDP to support or create action centers for, you can e-mail tyler@ssdp.org about them.

Students can help support state ballot initiatives by petitioning to get the initiative on the ballot, informing voters, and helping to get out the vote.

Students can help support state legislation by informing and lobbying legislators and by generating support through action centers and social media. If there are bills or policies you’d like SSDP to support or create action centers for, you can e-mail tyler@ssdp.org about them.

Almost all federal marijuana opportunities will come from SSDP headquarters. Keeping an eye on the SSDP Action Centers and subscribing to our mailing list and those of organizations like Americans for Safe Access, Marijuana Policy Project (MPP),  the Drug Policy Alliance (DPA), and the National Organization for the Reform of Marijuana Laws (NORML) will keep you up to date on opportunities to support federal marijuana reform. You can sign up for those mailing lists at the organization’s website: 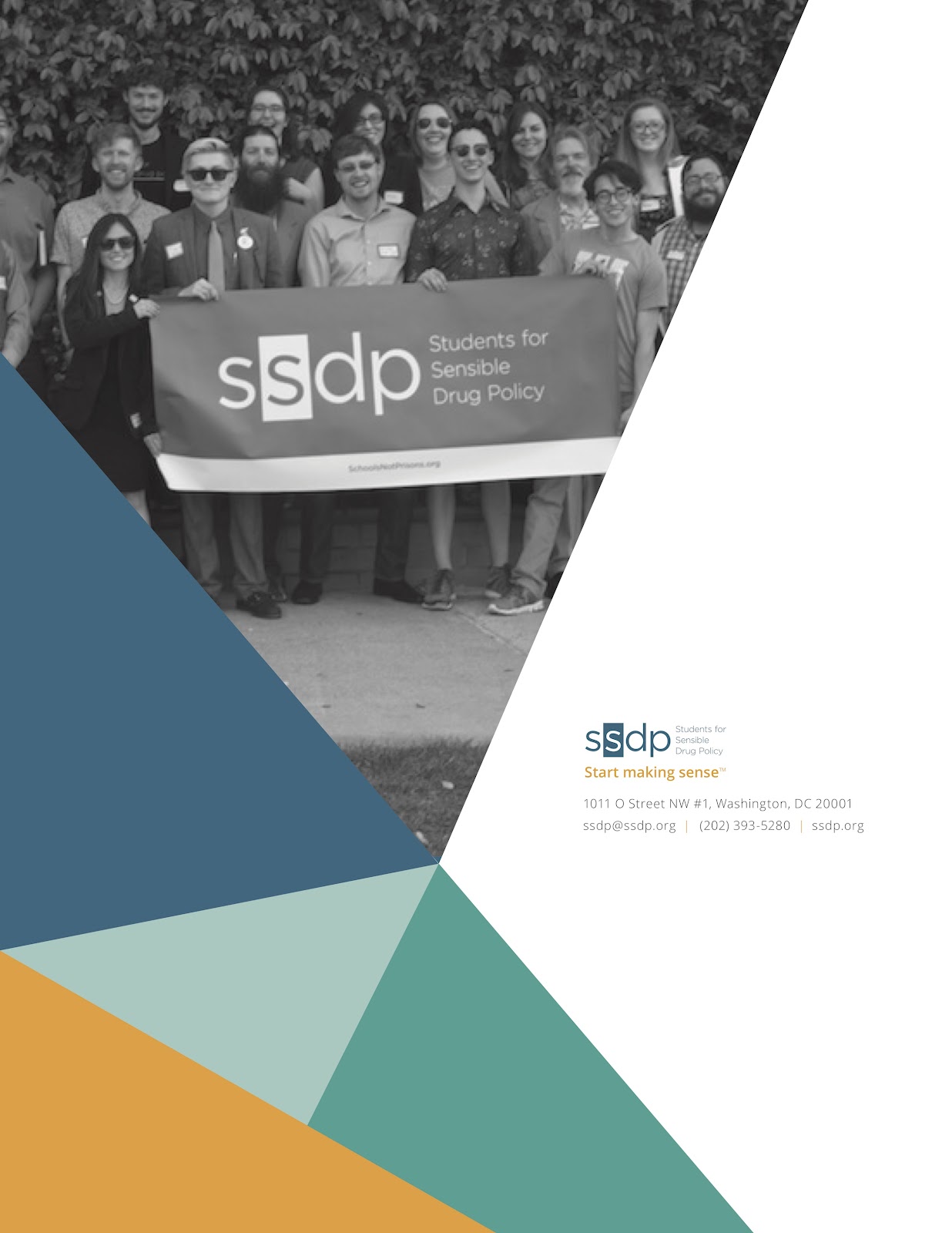