These students visited the Grand Canyon. But they never left class.

More than a dozen Center School District second-graders in Kansas City, Missouri took a field trip on a recent Friday morning. They went to the Grand Canyon in Arizona. They were back in class before lunchtime.

Actually, they really never left their classroom. They never even left their seats, for that matter.

But the Boone Elementary School students did go to the Grand Canyon, virtually. They saw the world wonder in 3-D and said it felt as if they were standing right in the midst of its rocky formation.

"Basically I took them on a virtual field trip," said Robyn Holsman, educational technology specialist for the Center School District.

Holsman has been the lady with the virtual field trips in the Center district since last fall when she first brought Google Expeditions and its virtual reality technology to the school district. She began training teachers to use the tool to energize lessons, lift them off the textbook page and make them more real for students.

On that Friday it was teacher Sydney Craddocks' second-graders' turn to travel.

Holsman handed out about a dozen virtual reality goggles attached to old unused district cell phones. These days the phones are connected to the Google Expeditions app operated by Holsman, the field trip guide.

Holsman, with an iPad in hand, could see everything the students in Craddocks' class could see. A little smiley face representing each student in the class appeared on Holsman's iPad so she would know every student was looking on the field trip.

On command, students picked up a pair of googles and held them to their eyes.

Lola Valdivia wasn't sure what to make of the vast canyon. "It's beautiful and it's ugly because it's all rock," the 7-year-old said. 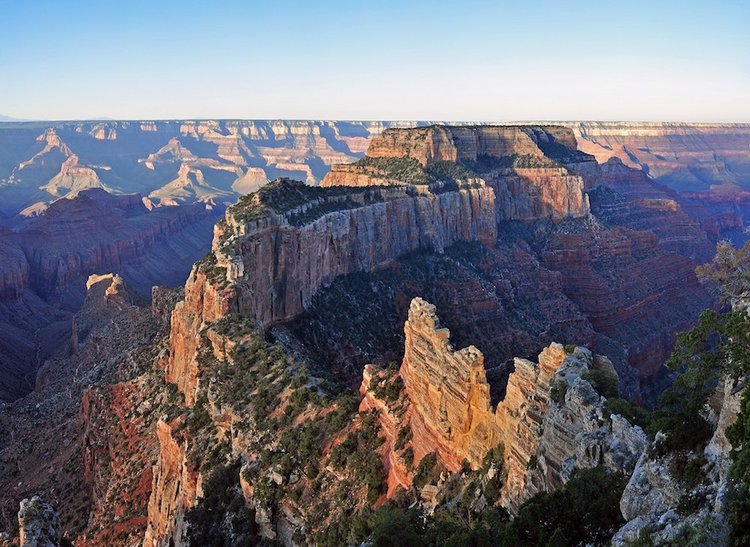 Students take a trip to see the Grand Canyon, without ever leaving the classroom. The Grand Canyon is in Arizona. Photo from Wikimedia.

Holsman used a mix of the computer-aided learning device with traditional forms of learning. She had students write down what they saw and what they wondered about when they saw it.

Looking at an image on a screen is nothing new; teachers have shown films of amazing places in the world for many years. But this is something altogether different, Holsman said.

"Each kid is thoroughly immersed," she said. Every time she does this, students immediately start sharing what they see and feel with their desk mates, she added.

"They are talking and forming their own questions, and that's what we want," Holsman said.

"I tell teachers all the time this is not going to be a quiet exercise," Holsman said. "They are excited and engaged and they are learning from each other. And even though they can't really touch the canyon, they feel like they can touch it."

But there are rules to keep the lesson in order.

No getting out of your seat. Look all around through the goggles and talk to your neighbor about everything you see.

Virtual field trips are becoming a popular teaching tool in schools across the country and in the Kansas City area. Teachers are also using the concept in Lee's Summit and Hickman Mills schools, for example. At Center, the virtual goggles are being used at all grade levels to take students to places they might never afford to go.

The program allows students to virtually swim with sharks or walk through a museum of natural history without ever leaving their classroom. Holsman said she has taken fifth-grade students to the moon and middle school students who were studying career readiness to a New York work site. Some high school students visited the campuses of colleges they wanted to attend but could not afford to travel to.

"My students have been asking about taking a field trip all year," Craddock said. But what they had in mind was something more traditional like the Kansas City Zoo.

"It's nice to be able to take them somewhere that some of these children will never get to go. Somewhere they are really going to remember."

Since the lesson was about how the earth is changed over time by erosion and other natural processes, the second-graders also took a quick journey to see the Tolbachik volcano in Kamchatka, Russia. With her goggles pulled up to her eyes, Lola Valdivia let out a gasp. "I feel like I'm walking in lava," she said.

"It looks like it's snowing, like there is snow falling to the ground," another student yelled out, referring to the ash coughed up by the erupting volcano.