Last week was kind of a rough week with reports of numerous fruit rots and then a major uptick in trap catches of Brown Marmorated Stink Bug. Both these events are a result of summer weather more like is typically seen in the southeast than here in southern New England, and particularly in the case of fruit rots, have triggered more orchard fungicide sprays. Expect, with climate change, more of the same. Please be sure to read Insects and Diseases below for more information. Also, regarding rots, the Acimovic Blog at Cornell’s Hudson Valley Lab has recent post here. And a reminder, the MyIPM app is very useful helping with fungicide efficacy and resistance prevention, and has some pretty nifty audio on various diseases and insects, such as this one on bitter rot by Sara Villani (thanks Sara!) at North Carolina State University. But I encourage you to download and use the MyIPM app too!

Otherwise, apple harvest is picking up steam -- there’s still plenty of good apples out there! Macs and Honeycrisp are the main harvest thrust now. Apple maturity does not seem too far out of average one way or another. So, keep plugging away and looking forward to the upcoming dry weather. Unless you live in the Carolina’s...

UMass Extension has been tracking the invasive Brown Marmorated Stink Bug (BMSB), Halyomorpha halys, since 2012. For the past six years, the number of BMSB captured in pheromone-baited traps had remained relatively low, until now. Trap-capture data for 2018 have shown that, this year, BMSB populations are greater than any of the six previous years. Suspected feeding injury by stink bugs (allegedly BMSB) has been reported in a couple of orchards. However, the actual levels of damage have not been quantified yet.

For the 2019 growing season, growers are encouraged to implement a monitoring system for BMSB in their orchards. The pheromone lure being used by UMass Extension (available at AgBio, Inc.; http://www.agbio-inc.com; phone: 303-469-9221) attracts the three most significant stink bug species present in MA (brown, BMSB, green [Acrosternum]) and others (e.g., Consperse, Dusky, Red Shouldered).

Below is the most relevant information that is available on BMSB biology and management, as it relates to apple harvest.

Feeding injury by BMSB. Some apple cultivars are reported to be more attractive to BMSB than others. Preferred cultivars include 'Braeburn', 'Jonica', 'Jonagold', 'Fuji', 'Granny Smith', ‘Mutsu (Crispin)', ‘Honeycrisp’, ‘Red Delicious', 'Golden Delicious', and 'Stayman’. Those should be protected throughout harvest. Most of the damage from BMSB will occur in trees along orchard edges that are bordered by woods.

Typical feeding injury by BMSB is shown in the picture below. Feeding damage can occur anywhere on the apple or may be most common around the shoulder. Similar damage is caused by bitter pit, a disorder associated with nutrient imbalance in developing apples. Some cultivars – Honeycrisp in particular – are more prone to bitter pit than others. See below a chart comparing stink bug versus pitter pit injury. 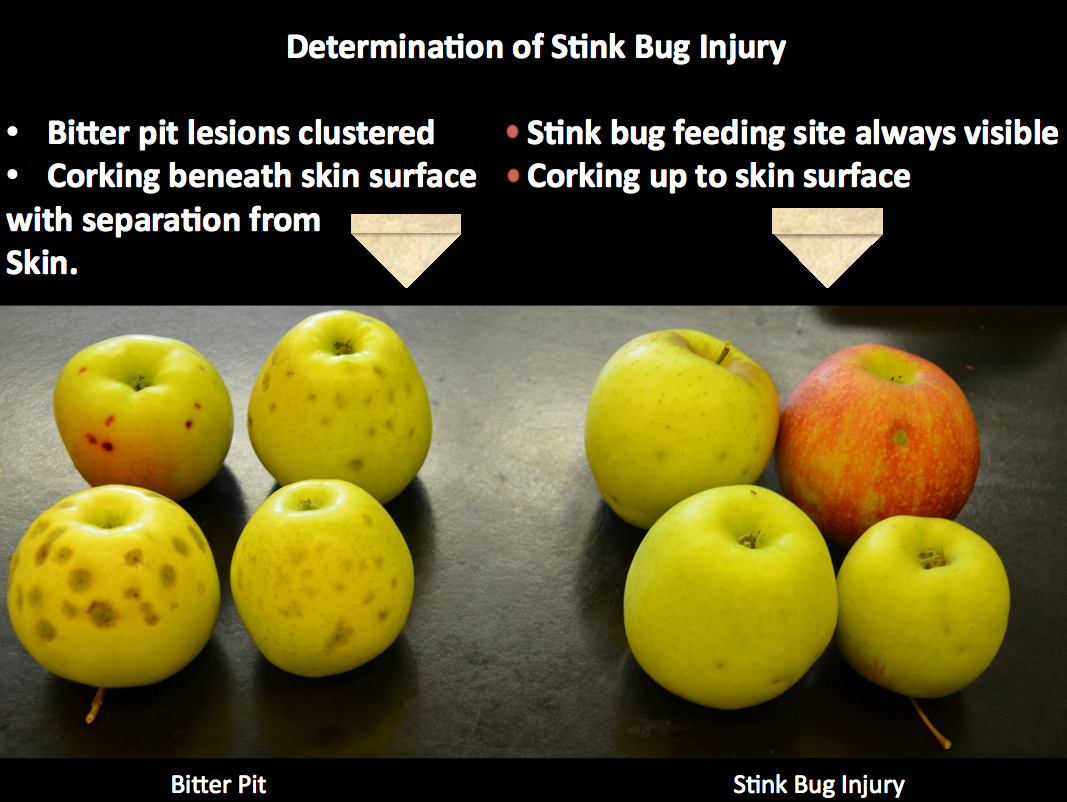 Based on the above pictures and information, can you tell which of the two apples shown below has symptoms of bitter pit? 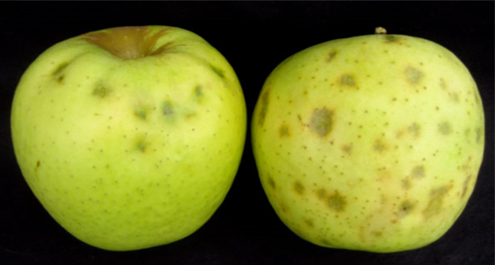 The ‘ghost trap’: an effective option for killing BMSB near or at harvest: In 2014, a Pennsylvania grower took a piece of horticultural net, treated it with insecticide, baited the net with the aggregation pheromone lure for BMSB and then put it out in the orchard to see what would happen. As reported by PennState Extension entomologist Greg Krawczyk, these treated nets that we are calling ‘ghost traps,’ killed more than 400 stink bugs per week on average (see picture and graph below). These so-called ‘ghost traps’ have been shown to work right through harvest time, when BMSB numbers are at their highest, when growers have the fewest options available to combat them due to pre-harvest intervals that limit pesticide use. 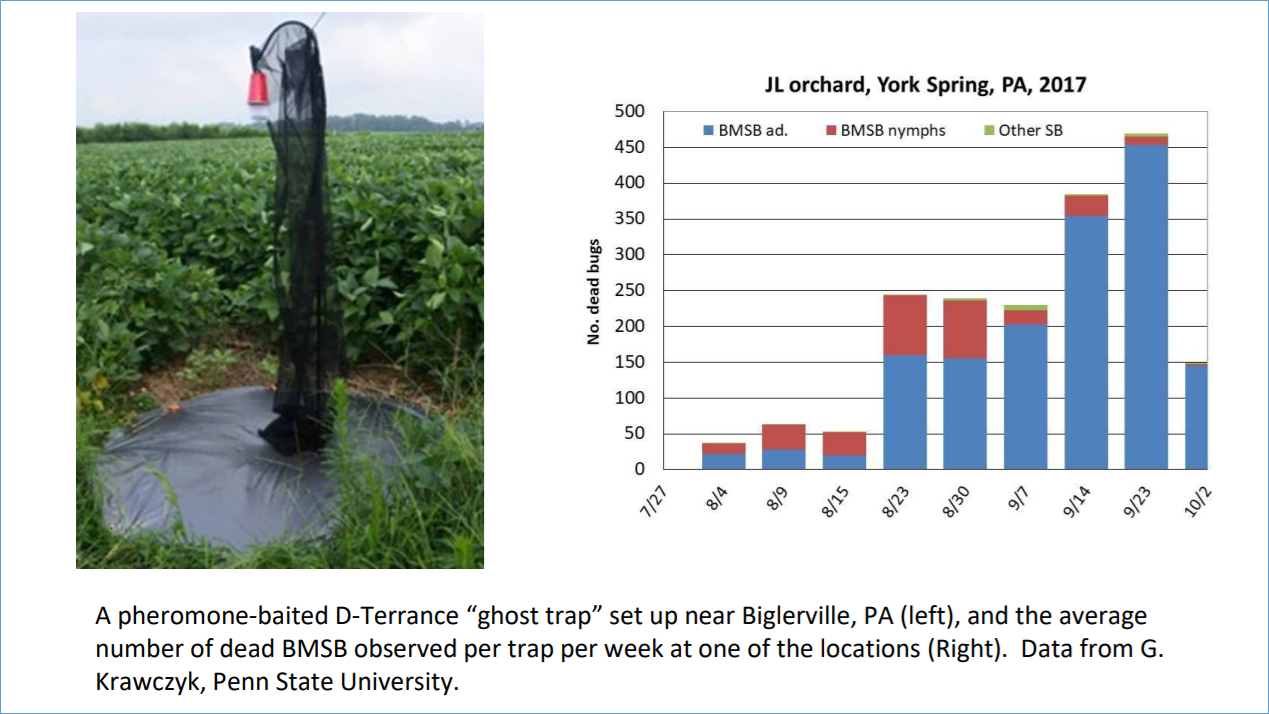 UMass information: On September 5th, 2018, three ‘ghost traps’ (see pictures below) were deployed in orchards where BMSB adults and nymphs were captured in monitoring traps.

In one of those orchards, the ‘ghost trap’ attracted and killed 53 BMSB (adults and nymphs) in just 24 hours (see pictures below).

How many generations does BMSB complete in Massachusetts? It takes 1,224 DD50 for BMSB to complete the second generation. As of 9.11.18, using Belchertown weather data, 2,579 DD50 have accumulated since January 1st. The presence of late-instar nymphs in traps and on trees means that, currently, overlapping BMSB first and second generations are likely present in orchards.

What is the period of highest risk or susceptibility? Apples harvested in and after September are exposed to the highest annual BMSB populations because (1) stink bugs have been reproducing over the summer, and (2) drying seed pods of deciduous trees and broad leaf weed species combined with reduced day length are prompting both native and invasive stink bugs to begin intensive feeding on tree fruit.

As apples are harvested, the remaining fruit is likely to receive increased injury. Note that BMSB feeding on apples during the last 1–2 weeks before harvest may not be expressed as injury at harvest; however, apples showing no surface injury at harvest may develop both surface and internal injuries following a period in post-harvest cold storage.

Has an economic threshold been developed for BMSB? Yes. Research conducted in West Virginia and Maryland has demonstrated that captures in pheromone-baited pyramid traps can be used to trigger a management action in apple orchards. When cumulative captures of adult BMSB in any trap within the orchard or at the orchard border reached a threshold of 10, an effective insecticide was applied as two alternate-row-middle sprays with 7 days between. This strategy has demonstrated to reduce the number of BMSB-targeted sprays while maintaining good control of injury.

What are the insecticide options for controlling stink bugs close to harvest?  Peter Jentsch (Cornell University Hudson Valley Research Laboratory) has conducted field evaluations of insecticides. In one 2017 study, he compared Bifenture EC (bifenthrin), Closer SC (sulfoxaflor), Actara 25WDG (thiamethoxam), and Venerate XC (a biopesticide consisting of the bacterium Burkholderia spp. strain A396) to determine the impact of these insecticides on adult feeding and survival on late season apple. The most effective option was bifenthrin.

However, the application of pyrethroid insecticides is not recommended unless it is deemed absolutely necessary.

Because BMSB move in and out of the orchard during the pre-overwintering phase, any materials applied to manage this pest need to consider alternate row middle on tight schedules and perimeter applications to reduce migration.

A synopsis of what researchers have learned so far about BMSB in apple, peach, cherry, and plum, as well as management recommendations using an integrated approach, is available here:

BMSB survey: Consider completing a survey implemented by Penn State. A nation-wide survey is currently underway to gather information from farmers and growers on the economic impact of the BMSB on agriculture. The objective of the survey is to provide you with the help you need in managing this pest.

Do you have any suggestions for articles on arthropod IPM? Please let me know!

Something is Rotten in the State of Massachusetts: Apples! 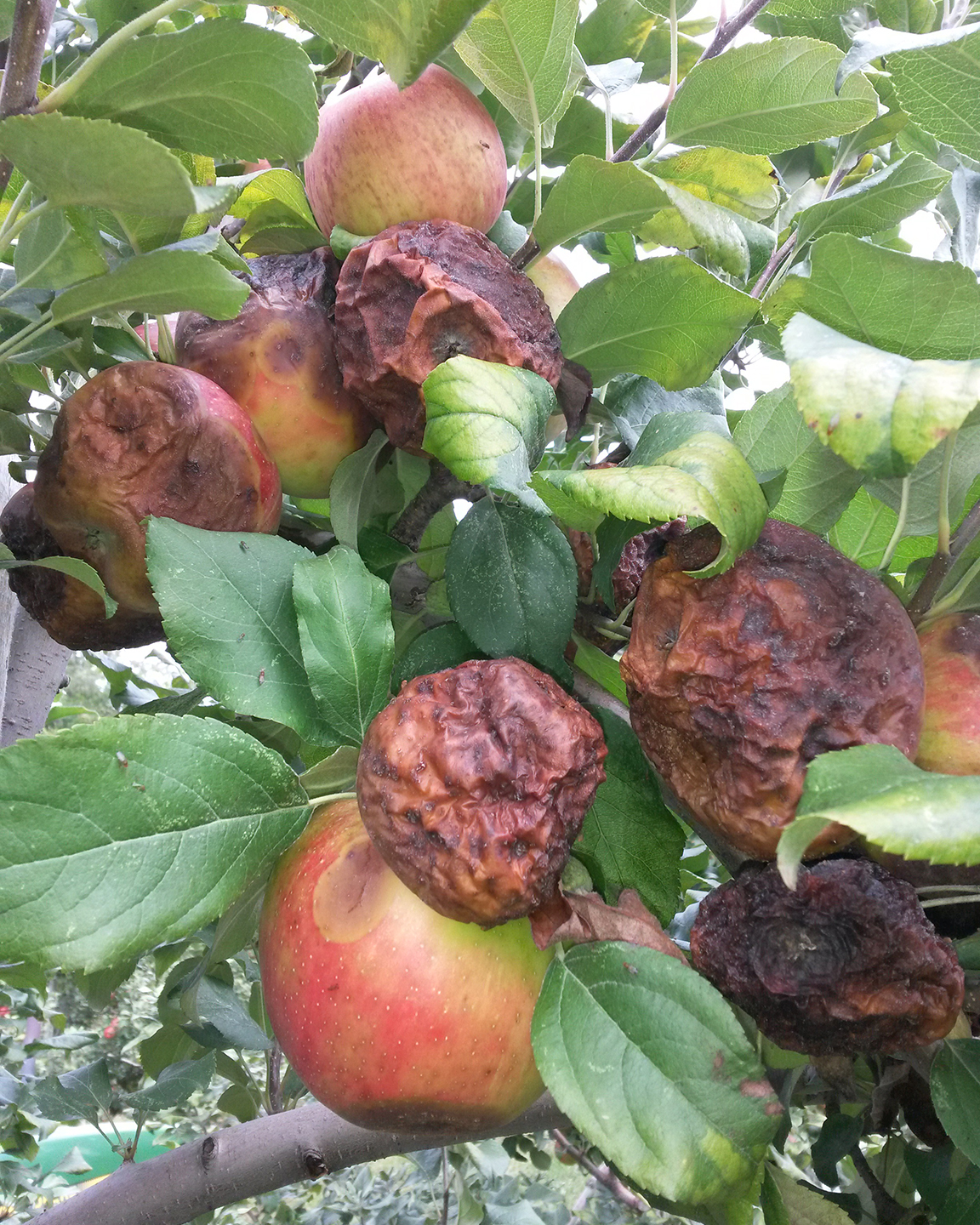 Pictures like this one are all too common in Massachusetts and the rest of New England this fall. Apple rots started to show up about three weeks ago, and have been getting worse ever since. Honeycrisp seems to be particularly hard hit, though it is by no means the only variety showing rot problems.

There are three rot diseases, bitter rot, black rot and white rot, all caused by fungi. Historically these diseases haven’t been a problem in the Northeast, but in recent years serious outbreaks have become more common. Other problems are also more common this year than most. Bitter pit, a nutritional problem on fruit, has shown up. Some stink bug damage has appeared. Then there’s sun scald.

To decide how to deal with a problem you need to know what’s causing it. Stink bug injury and bitter pit are shallower, smaller injuries than rots. To see them in detail, look at Jaime Piñero’s article above.

Bitter rot first shows as small, sunken light brown spots on fruit, often on the side exposed to sun. That’s because sunscald seems to increase bitter rot. As the spots get bigger, they may show some orange or pink areas, spores, often in a target-like pattern.  If you cut a slice through a bitter rot infection, the rot pattern goes into the fruit like a triangle or cone. Bitter rot is caused by different species in the fungal genus Colletotrichum. 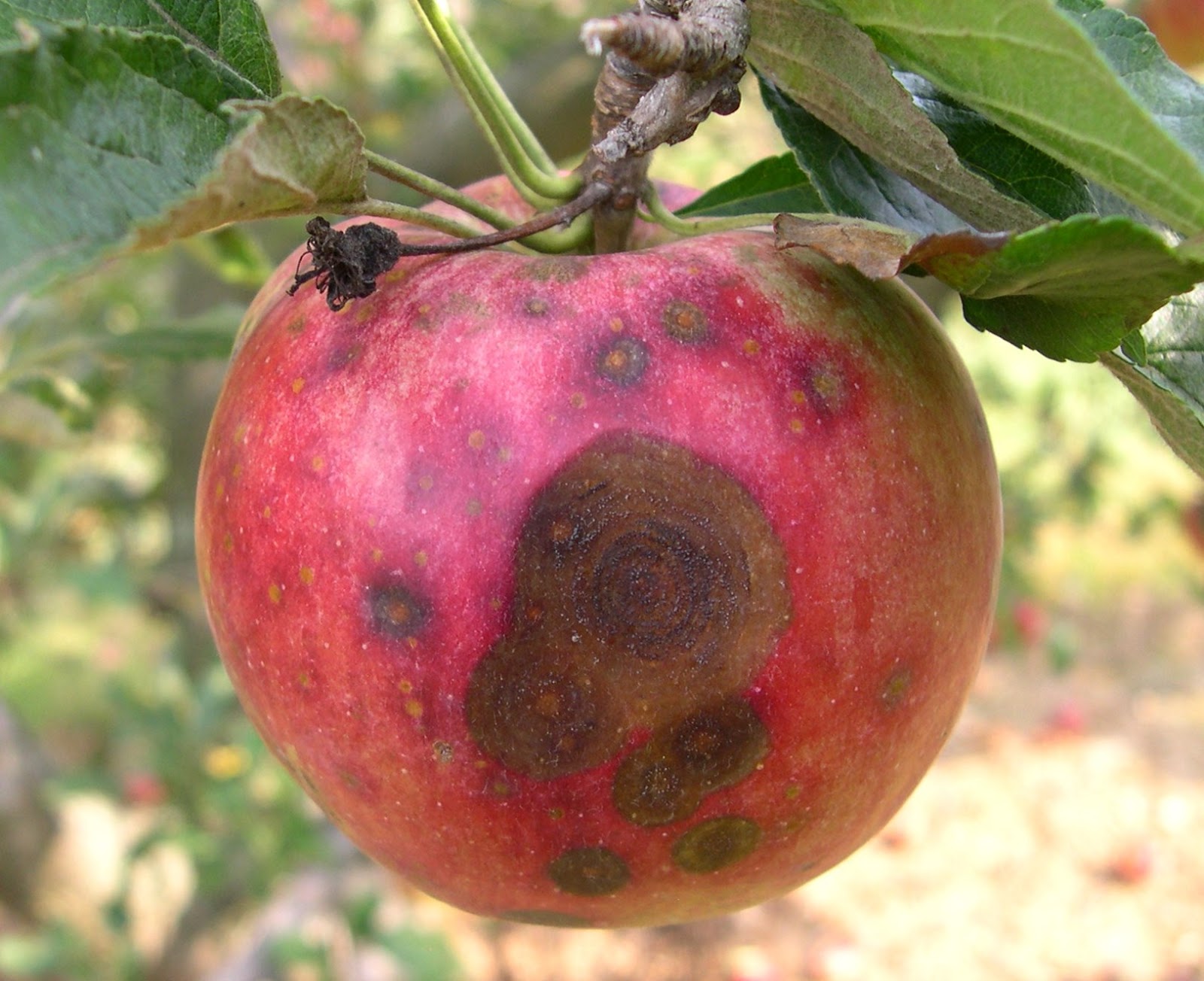 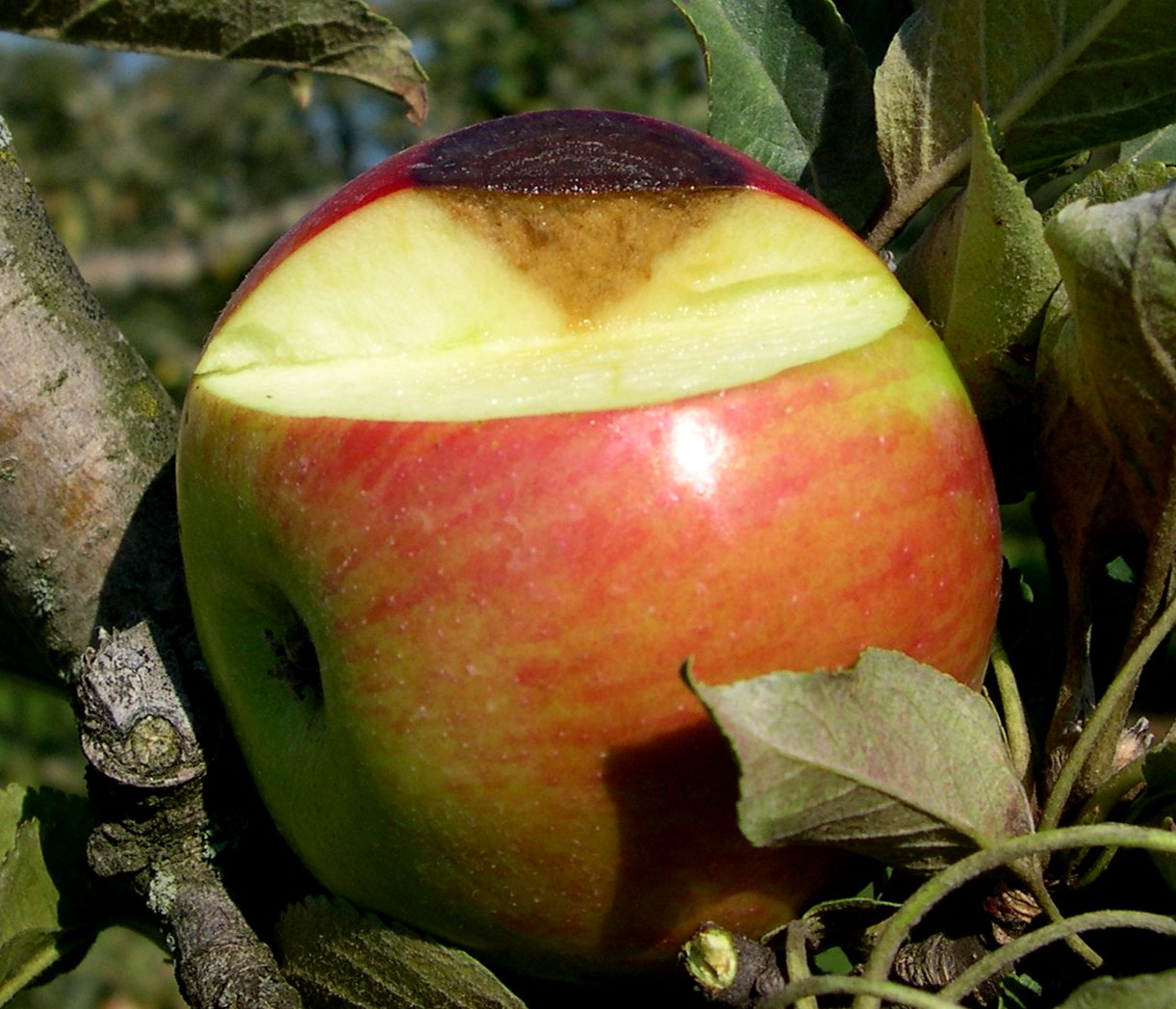 Black rot and white rot are caused by fungi in the genus Botryosphaeria. Botryosphaeria is always around in orchards, and whether it causes disease depends on weather and the state of fruit and trees. Black rot causes disease in wood and leaves as well as fruit. Symptoms on fruit start as small, dark spots, often around lenticels. Infections may start at any time in the growing season and remain invisible until fruit starts to ripen. Decayed areas are firm and relatively dry. White rot produces a softer, wetter rot, making fruit what has been called “sauce in a bag”. 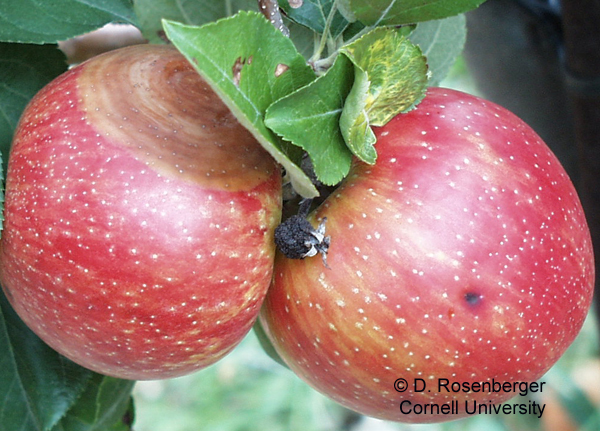 Black rot on Honeycrisp showing a new small lesion on the fruit on the right, and a large rotted area on the fruit to the left. Between the fruit is a mummy, which can supply black rot inoculum. (Dave Rosenberger, Cornell Hudson Valley Lab). 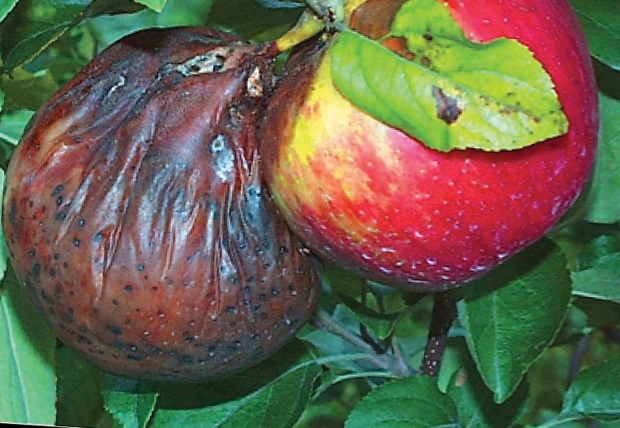 Why are we seeing more problems from these rot diseases? In a couple of words, climate change. That’s the main reason. Our summers are wetter and warmer, particularly the nights, ideal for the fungi that cause summer rots. We’re also growing varieties that are more susceptible to rots, like Honeycrisp, or because they’re harvested later are more likely to get rots, like Cripp’s Pink. The primary target for summer fungicides in New England has been the sooty blotch/flyspeck blemish disease, and we have not paid particular attention to managing rots. We will need to in the future, and this will probably mean more fungicides in the summer. The infections that we’re now seeing on fruit probably started in July and early August, and new infections will continue through harvest.

These rots may develop in storage, so it is important to maintain coverage through harvest. 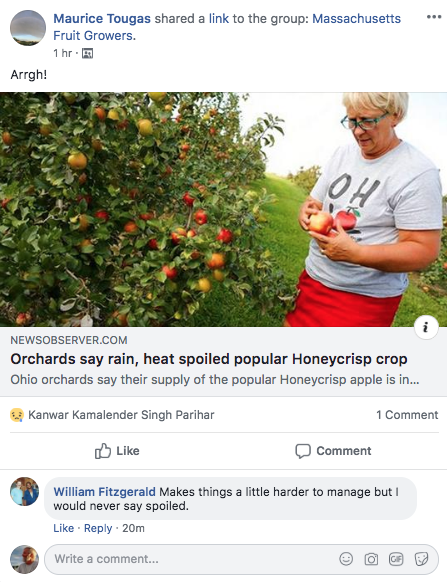 The next Healthy Fruit -- mostly an apple maturity report -- will be published on or about September 18, 2018. In the meantime, feel free to contact any of the UMass Fruit Team if you have any fruit-related production questions.