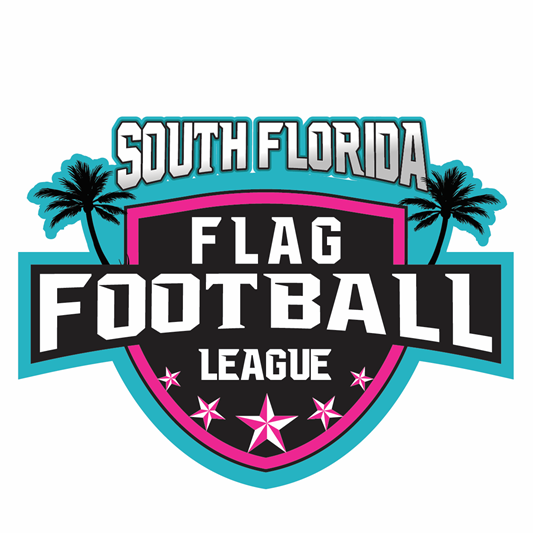 The mission of the South Florida Flag Football League (hereafter referred to as SFFFL) is to proudly foster community, camaraderie, and inclusivity by providing opportunities to engage in competition through flag football throughout the lesbian, gay, bisexual, transgender, queer or questioning, intersex, asexual or aromatic (hereafter referred to as LGBTQ+) communities and straight allies living in the state of Florida.

In complying with the mission of our parent organization, the National Gay Flag Football League (NGFFL), the SFFFL is established as a not for profit, charitable organization promoting competitive co-ed recreational football.  All skill levels are encouraged to participate, play and volunteer. Our league is committed to hosting a variety of teams, with over 100 participants, including a loyal and growing group of spectators and supporters and that reaches and impacts the community through our educational, outreach, volunteer and community service activities.

Through flag football, we foster an environment where LGBTQ+ people can:

The SFFFL embraces the notion of community by building a spirit of teamwork, camaraderie, positive social enjoyment, athletics, and volunteerism to enrich the lives of all individuals involved in our league. Our organization will:

It is a fundamental principle of the South Florida Flag Football League that all social and athletic activities are to be inclusive in nature and that no individual shall be excluded from participating based on sexual orientation, gender, gender identity, gender expression, race, religion, nationality, ethnic origin, political beliefs, athletic ability, physical challenge, or HIV status.

The South Florida Flag Football League promotes gender inclusion by allowing players to self identify gender.  The gender that a player identifies with is considered to be that players gender.

APPENDIX A: Board Roles & Responsibilities

APPENDIX B: Code of Conduct

5. MAINTAINING MEMBERSHIP WITH THE NGFFL

5.1 Good Standing. The SFFFL will submit NGFFL membership dues annually year to remain in good standing with our parent organization, the NGFFL.

5.2 Allowable Timetable for Maturation. By December 31 of every calendar year, the board of the SFFFL will provide the NGFFL with bylaws that have been passed by a voting process and that demonstrate that a league is in place, representative of the local LGBTQ+ community and led by elected leaders.

6.1 Liability of Members. The liability of a Member to contribute towards the payment of the debts and liabilities of SFFFL or the cost, charges and expenses of dissolving SFFFL, will be limited to the amount of the league dues for that calendar year. Members will not be responsible for any outstanding debt of the SFFFL beyond this membership fee.

6.2 Liability of the SFFFL. SFFFL is not responsible for any obligations/liabilities of its members, sponsors, or parent organizations.

7.1 Budget Standards. The Treasurer of the SFFFL is required to submit budgets for consideration and approval by the following dates:

of each Budget Year. The board will vote on budgets approved by the Treasurer.  The budget shall pass with a majority vote from the board of directors.

7.2 Annual Operating Budget. At the beginning of each calendar year, the Treasurer shall prepare an operating budget for review and approval by the Board that incorporates the budgets submitted by board members. The Board will approve the operating budget and all budgets by a two-thirds majority vote. The Board will publish the final operating budget and make it available to the NGFFL, other NGFFL Member Organizations, and SFFFL members in the program for the Florida Sunshine Cup or at any time it is requested in writing.

7.4 Cash Management. At all times, no less than two members of the Board must have full visibility into and access to the SFFFL’s bank account(s) and other assets. That includes bank-account usernames and passwords. The Treasurer will use these records to compile the monthly treasurer report. The records will be verified monthly by the Commissioner, Secretary, and a member of the league advisory board. These three auditors will not have direct access to these assets.

8. GOVERNANCE AND THE BOARD OF DIRECTORS

8.1 Composition. The SFFFL will be governed by its Board of Directors, accountable for all aspects of SFFFL operations and full compliance with the NGFFL, our parent organization. The Board shall consist of the positions indicated in Appendix A of this document,  titled Board Members  and Responsibilities. Any individual that is or has been a Member in Good Standing of the SFFFL is eligible to serve on the Board of Directors.

8.2 Executive Board. As outlined by the NGFFL, the executive board is comprised of the acting commissioner, secretary, treasurer, and director of league operations.

8.3 Election of Commissioner. On December 15,  of every second year after 2017, the Commissioner of the SFFFL shall be elected by a majority vote of its Members, via secret ballot conducted by the Secretary and members of the Executive Board. The Board shall have collected and announced to the Members the candidates for Commissioner by December 1. The candidate that receives the most votes shall win. In the event of a tied vote, a runoff shall be held the following week. The election will be facilitated and completed, and the results will be announced in a timely manner. The term of the current Commissioner will end on March 1, at 10 am; of the new year and the new Commissioner’s term will begin on March 1, at 10 am; of that same day and new year.

8.4 Election of Board Members. On every calendar year, on December 15th, the Board of Directors will facilitate an election by secret ballot to fill open Director positions.  The board will announce the results of these elections in a timely manner.  New directors will assume office on March 1st of the following year.

8.6  Resignation. Any Board Member may resign in writing to the Board at any time. Any Board Member who is proven to have fallen out of good standing with the SFFFL, or is incapable of serving, shall be deemed to have resigned as a Director.

8.8 Removal. Any Board Member may be removed at any time if two-thirds of the Board Members then in office, excluding the one being considered for removal, choose to vote and set a motion to remove such board member. A Board Member may also be removed by a majority plus one of active players in the league.

8.9  Replacement. The Board will conduct an election following prior voting standards within 30 days to replace a resigned or removed Board Member.

9.1 Positions and Roles. Board member (also known as Director or Officers) and other official positions and their roles are described in Appendix A.

10.1 Annual Meeting. The SFFFL shall hold an Annual Meeting to reorganize the league to meet the league needs. The meeting will take place in January. The meeting will take place in the form of an open town hall, conference style. The purpose of the meeting shall be to inform Members of the state of the SFFFL, the organization’s financial position, opportunities and plans for the calendar year, and to solicit input on those topics. The Board shall make every effort to give Members 30 days notice of the Annual Meeting.

10.3 Board Meetings. The Board shall meet, at a minimum, monthly via a conference call or in person.  The commissioner and secretary will work to schedule these board meetings.

10.6 Chairperson and Agenda. The Commissioner serves as Chairperson of Board Meetings and sets the agenda.  The secretary is responsible for keeping minutes and keeping the discussion on track at the board meetings.

10.8 Minutes. The Board shall record thorough and detailed minutes of its regularly scheduled meeting, other Board meetings, and the Annual Meeting, keeping Members and the SFFFL fully informed of our decisions. The Board shall appoint a Board Member to take those Minutes at every meeting, typically the Secretary. The Board Member who takes the Minutes shall circulate the Minutes for approval within one week following the Board Meeting. Any Board Member may request a correction to facts as stated in the draft minutes.  To ensure complete transparency, the Board shall not alter, or delete content from the Minutes, nor purposefully exclude discussions nor content from the Minutes. Once approved by the Directors by a majority vote, the Board shall store the final Minutes each month via appropriate SFFFL channels for Members to reference upon request.

11.1 Member Voting Matters. As a nonprofit organization with voting members, Members shall vote on Voting Matters that are mission-critical to the SFFFL. After the passage of these by-laws, Member Matters include, but are not limited to:

▪ Directors to serve on the Board

▪ Induction into the SFFFL Hall of Fame

▪ Disputes brought by Members against Board decisions

▪ Other business as requested by the Board

11.2 Process for Member-Organization Voting. On Member Organizations Voting matters, the Board shall extend to Member Organizations the opportunity to vote via secret ballot, and facilitate the voting process accordingly. When voting in person, this process may be done manually as the board deems it appropriate. When not in person, that may be an electronic process using online survey instruments or equivalent tools.

11.4 Voting Procedure for Motions. Most motions will be conducted via electronic means or in person at board meetings. The results of these motions will be published by the Secretary by means of inclusion in the formal meeting minutes before the first of each month. Board members are given 24 hours to vote on any motion. A non-vote does not count towards the majority required to pass the motion. A vote in absentia does not count towards the majority needed to pass a motion. The Commissioner should only vote if it is needed to approve or defeat a measure.

12. NOTICES. Wherein these rules notices are required to be sent to Members, they shall be deemed to be duly served if delivered by hand or sent electronically. In the case of notices of meetings required by these rules, the accidental omission to provide a notice to any Member, or the non-receipt of such notice, shall not prejudice or invalidate the proceedings or decisions of such meetings.

13. AMENDMENTS, ADDITIONS TO THESE BYLAWS. These bylaws may be modified, altered or added to by a resolution of the Board. Upon the passing of the modifications, alterations, or amendments by a two-thirds vote of the Board, the proposed changes shall go before the League Members for a vote. For the modifications, alterations or amendments to take effect, they must secure a majority vote of approval by the Members. The rules will be deemed to have been amended accordingly and all Members shall be bound by the amended rules.

14. INSPECTION OF DOCUMENTS. The Board shall ensure that the Minutes to all Board Meetings and the Annual meeting, as well as operating budgets, reconciled budgets and financial reports, are publicly available for Members of the SFFFL and the Board of the NGFFL for review.

15. APPEALS. Any dispute between a Member and the Board may become a voting matter. The official dispute must be submitted in writing to the league either electronically, or manually.  Verbal complaints will not be accepted. Once received by the Board of Directors, the Board shall facilitate a vote and the dispute shall be settled by a majority vote.

16. DISSOLUTION. The SFFFL shall be considered dissolved with a majority approval of the Board. In such an event, all properties and possessions of SFFFL are to be sold, and all proceeds are to be used to pay all outstanding debts of the SFFFL.  All remaining assets including any endowments shall be disbursed to charitable organizations at the discretion of the board.