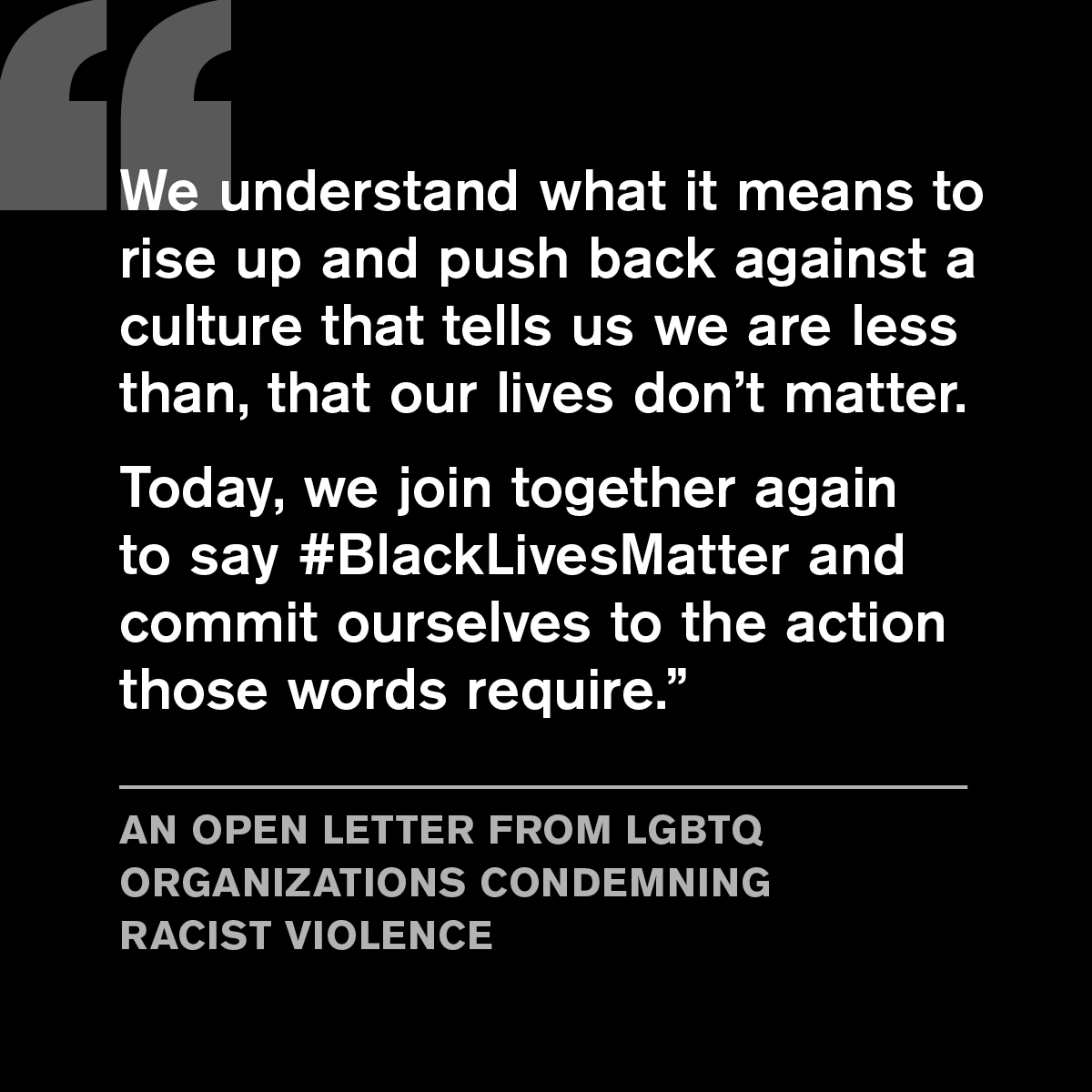 “If you are neutral in situations of injustice, you have chosen the side of the oppressor.” Those words, written over 30 years ago by Archbishop Desmond Tutu, remind us that indifference can never bridge the divide of hate. And, today, they should serve as a call to action to all of us, and to the Movement for LGBTQ equality.

This spring has been a stark and stinging reminder that racism, and its strategic objective, white supremacy, is as defining a characteristic of the American experience as those ideals upon which we claim to hold our democracy — justice, equality, liberty.

All of these incidents are stark reminders of why we must speak out when hate, violence, and systemic racism claim — too often with impunity — Black Lives.

The LGBTQ Movement’s work has earned significant victories in expanding the civil rights of LGBTQ people. But what good are civil rights without the freedom to enjoy them?

Many of our organizations have made progress in adopting intersectionality as a core value and have committed to be more diverse, equitable, and inclusive. But this moment requires that we go further — that we make explicit commitments to embrace anti-racism and end white supremacy, not as necessary corollaries to our mission, but as integral to the objective of full equality for LGBTQ people.

We, the undersigned, recognize we cannot remain neutral, nor will awareness substitute for action. The LGBTQ community knows about the work of resisting police brutality and violence. We celebrate June as Pride Month, because it commemorates, in part, our resisting police harassment and brutality at Stonewall in New York City, and earlier in California, when such violence was common and expected. We remember it as a breakthrough moment when we refused to accept humiliation and fear as the price of living fully, freely, and authentically.

We understand what it means to rise up and push back against a culture that tells us we are less than, that our lives don't matter. Today, we join together again to say #BlackLivesMatter and commit ourselves to the action those words require.

Alaskans Together For Equality, Elias Rojas, Board President

All Rainbow and Allied Youth Inc., Hal Trejo, Board President

Alliance for Housing and Healing, Jack Lorenz, Director of Development and Communications

Being Alive Los Angeles, Carla Ford, President,  Board of Directors

Black, Out, and Proud, Eboni Partlow, Board President

Come Out With Pride Orlando, Tatiana Quiroga, Board Member- Secretary

Get Out And Trek (GOAT), Keith Oberlin, Founder / Adventure Director

Get The Vote Out, Brad Henry, Founder

He She Ze and We, Shannon McKay, President

Out in STEM University of Michigan, Anna Pasek, President

Out in the Open, HB Lozito, Executive Director

OUT MetroWest, Board and Staff, Collectively

Out on Film LGBTQ+ Film Festival, Craig Hardesty and Jim Farmer, Board Chair and Festival Director

SAVE - Safeguarding American Values for Everyone, Orlando Gonzales, Executive Director

Side by Side VA, Inc., Ted Lewis, Executive Director

Stonewall Columbus, Gerry Rodriguez, President of the Board of Trustees

The DC Center for the LGBT Community, Rehana Mohammed, Board Chair

Under The Arc, Arthur Dawkins, Founder