The European Union as an International Organization

Understanding the EU as an International Organization provides a much needed revision of our expectations.

In a recent talk in Zurich, Karen Donfried suggested that the predicaments of the European Union are only a concrete case of a more general phenomenon: the contestation of the international order that has dominated global affairs since the beginning of the decade. This order has been characterized by the attraction power of liberal values and a set of international institutions. As the director of The German Marshall Fund of the United States, she is a privileged observer of the decay that looms over these elements.

But this comment is not new. Scholars have pointed out that the political moment of the Union has to be framed within the new era of disintegration, a generalized retrenchment of international organizations (IOs) in which their legitimacy is contested and states reevaluate the benefits of transferring decisions to their forums. Although it is obvious, journalists and commentators have neglected for too long that the European Union is – just – an international organization, and is affected by this phenomenon in similar terms than other IOs. During the 90s and until the rejection of the constitution by the French voters in 2005, this was an excusable neglect. Member states committed to levels of integration still unparalleled and several countries were lining up to join. Some did but others turned around their footsteps, like Iceland or Turkey.

But after the Euro crisis, the state of the Union makes it necessary to start the analysis from this reality. Thinking seriously about the European Union as an international organization clarifies how states bring forward their interests, just as they do in any other IO. Rather than being an oversimplification that ignores decades of research on bureaucratic entrepreneurship and socialization, it is a necessary principle to understand why the European Union has abandoned the once-famous soul searching and has not produced any successful institutional innovation during the last ten years.

Consider, for instance, the three immediate challenges for the EU: Brexit, the elections to the European Parliament (EP) in May 2019, and post-Merkel Germany. In my view, the exit of the United Kingdom is a misguided interpretation of the national interest and a consequential loss for most parties. Nevertheless, in the world of IOs, it is not an unusual event. In the collection of IOs that exist today, there are at least fifty that have seen their membership reduced at some point. As the graph below shows, the membership losses have increased in the last twenty years. These other organizations, such as the Andean Community, did not accumulate the depth of policy integration of the European Union, but this does not put Brexit on a different dimension than the previous withdrawals. State’s considerations to abandon other IOs were guided by the same principles of national interest, either as perceived by autocratic elites or through parties in democratic systems. 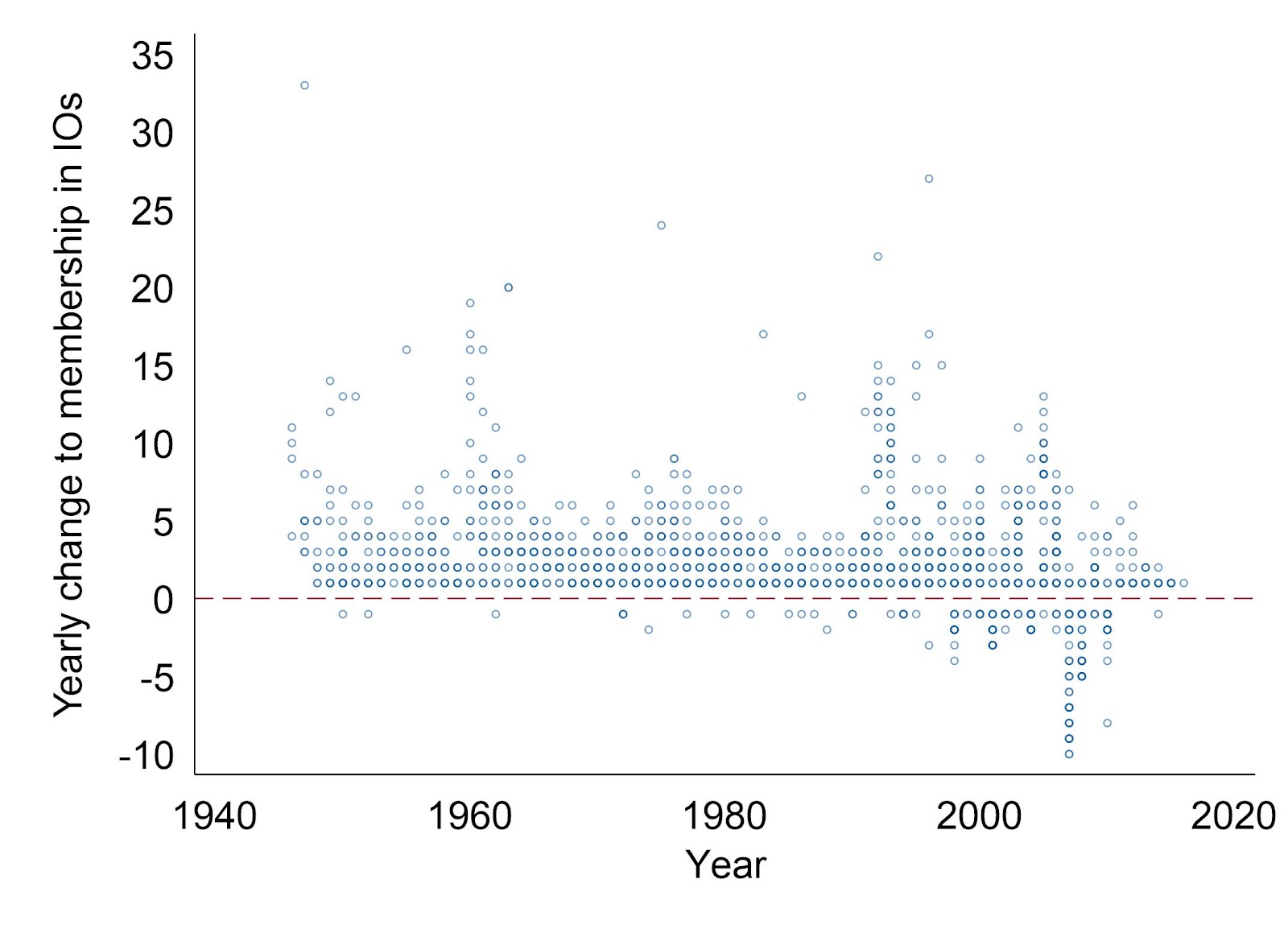 The next elections to the EP are feared, again, because they might exemplify the unpopularity of the parliament among European voters. A widely known fact is that the average turnout rates have decreased consecutively on every occasion. The growing contestation to the main democratic link of the Union is part of the same legitimacy crisis that all international organizations are struggling to cope with. During the last years, research has described how all IOs, and not only the EU, have engaged in a multitude of strategies to change positively how voters and national elites perceive them. The European Union has attempted to reinforce their connections with the public and with national parliaments, which most people still see as the main defender of national sovereignty.

However, these initiatives have mostly failed. The intention to select a candidate to president of the Commission before the election has not enjoyed acceptance by all parties, or helped with name recognition of the candidate beyond his own media system. There is no cross-national reporting of Manfred Weber, for instance, the candidate of the European People’s Party. Further institutional innovations, such as transnational lists, were once seriously discussed but are now very unlikely. The intention to give national parliaments some say in the decision-making process has also not had the expected results, because each has used the system in a highly idiosyncratic manner. This is, after all, not surprising because in most of Europe the parliamentary majority obeys the government and not the other way around.

Although research still has a lot to cover in this matter, the failure of these legitimation measures plays a role in the expected rise of parties advocating a retreat from international institutions. These parties are also not a novelty (most of them already have members in the European Parliament since the past elections in 2014), but they are now occupying a more central position and are in control of important governments. Poland is a better example than Hungary because it was seen as the integration leader of central Europe in years past. This can move traditional parties to adopt part of their agendas.

The end of the era dominated by Angela Merkel will encourage governments of smaller states to steer policies towards their interests. To do this, they can use channels that have been present in the politics of the EU during decades. The most relevant is what researchers call differentiated integration: the situation in which countries seek exemptions from integration steps, such as not adopting the Euro. This differentiation started as exceptions to regulatory policies, but it quickly extended to core state policies, elements such as security policy. These arrangements are important because they help solve gridlocks in negotiations, but also create groups within the members and can put excessive pressure on the political and legal bases of the system.

For example, during the peak of the refugee wave of 2015/16, the Visegrad Group or V4 (the four central European countries: The Czech Republic, Hungary, Poland and Slovakia) challenged the relocation quotas established by the Commission, calculating that facing sanctions was ultimately less costly for them than implementing the plan. If a post-Merkel German government is perceived as less powerful or less committed, these differences will only increase and confirm, again, that the nature of the Union is only constructed by the states that inhabit it. Perhaps as a reaction to this tendency, France and Germany recently signed the Treaty of Aachen. This is relevant for three reasons. Nationally, it is a cyclical reinvigoration of collective memories, which for French and Germans are pillars of stability. Internationally, it is politically challenging to governments controlled by parties that seek power devolution from Brussels, such as Italy and Poland. Lastly, it is relevant that this treaty had to be agreed bilaterally, outside the framework of the European Union, possibly because both governments are aware that commitments to strengthened military cooperation would not be accepted by most.

Seeing all this, how should we address the challenges to the European Union from Catalonia? Treating the European Union as an international organization, in which states concede decision-making authority to solve common problems. Understanding national interests as states do. For instance, if we had the resources to lobby on a Brexit deal, we should support a deal-Brexit that does not harm our economic interests, but that antagonizes the UK and Spain. Understanding that the European Union, and much less the Council, will not encourage political interventionism or sanctions against Spain if it does not threaten the existence of the Union itself or the interests of the most powerful states within it.