The bullish trends in the stock market thus far in 2019 continued in the third quarter. However, there was an increase in volatility as fears of a global economic slowdown and uncertainty around the US/China trade war arose. Additionally, headlines of a looming recession in the US ran rampant as the yield curve inverted. A more reasoned analysis clearly shows that the threat of a recession is no more relevant today than it was a year ago when recession talks first surfaced.

While the economy has slowed from its 2018 blistering growth rate, there are still no signs that a recession is on the horizon.  One key recessionary tale you may have read about is the inverted yield curve. An inversion happens when shorter-dated bond yields rise above longer-dated bond yields. The inversion signal followed by most market-watchers is the difference between the 10-year note and 2-year bill. It is worth noting that in previous recessions the difference between the 10-Year and 2-Year yields has been as deep as negative 25 to negative 80 basis points, while remaining inverted (or negative) for nearly two years. In the case of the recent inversion, it lasted for one day and the difference was two basis points. Essentially, the inversion was not warning of anything at all other than the fact that we now live in a low-interest-rate world that is starved for yield. 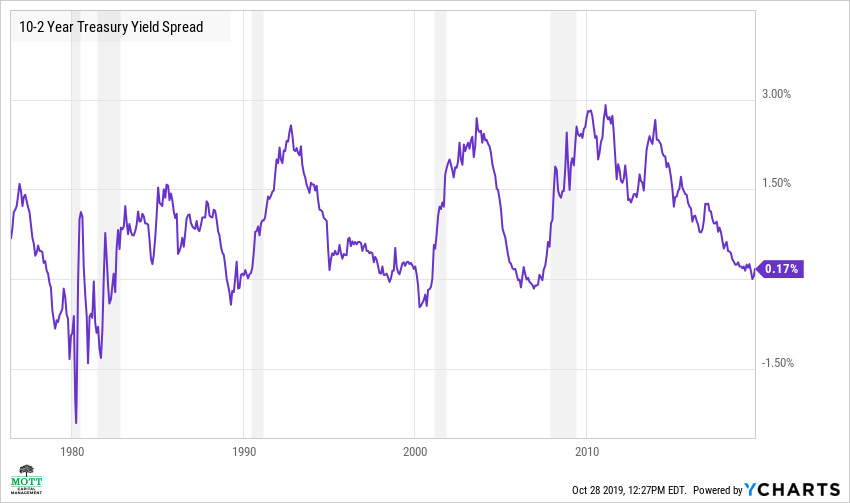 Over the past year, my call for no recession has been the correct one, and all of my current research continues to suggest that there is no recession looming. I also believe that a year from now, history will show that the 2019 recession fears were incorrect and that the only place a recession surfaced was in the daydreams of bearish analysts looking for an exciting headline. 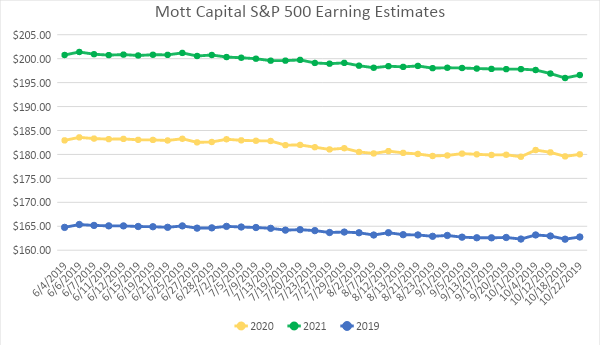 Overall, the quarter for the portfolio was mixed, with shares of Acadia surging and Netflix plunging. The positioning of the portfolio seems strong and in better shape than at the start of the year.

Acadia shares jumped during the third quarter following news that the company’s dementia-related psychosis (DRP) trial achieved its primary endpoint as determined by an independent data monitoring committee. As a result, the trial was concluded early, and the company plans to take the required steps to have Nuplazid’s label expand from Parkinson’s disease psychosis (PDP) to include dementia-related psychosis. It creates a potentially big win for the company, as it is estimated that the population size for patients with DRP is about ten times larger than PDP.

Apple shares have surged following the release of its newest iPhones, the 11, Pro, and Pro Max. Additionally, the company will release its new video streaming service in the coming weeks, helping the company to expand its services revenue in the future. Investors appear to be assigning the stock a higher price to earnings multiple as the company transitions away from a predominantly hardware-based income stream to a more service focused business model, which was the key to my original investment thesis.

Alphabet also had a strong third quarter after posting stellar second-quarter results. The company is the dominant player in the online advertising landscape. Also, Alphabet subsidiary YouTube continues to be a dominant force in providing streaming media content.

Cisco fell by almost 10% after providing weaker than expected third quarter guidance. The company was clearly bid down as a result of the trade war between the US and China. Even though China represents a small portion of Cisco's business, it was a severe hit, hurting the company’s outlook.

Disney fell during the quarter for no particular reason. The stock seemed just to get caught up in broader market selling, and some of the weaknesses associated with the streaming war headlines. My outlook for Disney remains bright.

During the third quarter, I decided to sell-out of our position in Raytheon after initially purchasing it in October 2015. I was unhappy with the proposed merger with United Technologies. I felt it was better to have some extra cash on hand should the market pull back, allowing us to get into a new stock. However, to this point I have not replaced Raytheon. I have no plans to rush a decision, either.

Overall, the portfolio seems to be well situated, heading into the year-end. For the first time since 2015 our composite return since inception is very close to beating the S&P 500 total return index, the benchmark I strive to beat. Looking back, I know that 2016 is my Achilles heel, a year that was brutal for the stock market, which witnessed a vicious end of year sector rotation following the election of President Trump. It is the one year I wish I could get to do-over.  That said, my hope is that this year the portfolio is able to beat our benchmark once again.

As in the past, I will work my hardest to understand the current investment landscape, while continuing to identify new long-term thematic strategies shaped by generational and demographic shifts.

Disclosure: Mott Capital Management, LLC is a registered investment adviser.  Information presented is for educational purposes only and does not intend to make an offer or solicitation for the sale or purchase of any specific securities, investments, or investment strategies.  Investments involve risk and unless otherwise stated, are not guaranteed.  Be sure to first consult with a qualified financial adviser and/or tax professional before implementing any strategy discussed herein. Upon request, the advisor will provide a list of all recommendation made during the past twelve months. Past performance is not indicative of future performance.

Mott Capital Management, LLC (“Mott”) claims compliance with the Global Investment Performance Standards (GIPS®) and has prepared and presented this report in compliance with the GIPS standards.  Mott has not been independently verified.  The Thematic Growth Composite is a blend strategy of different market capitalizations, which is approximately divided equally among three sectors.  The Core Growth sector includes large multi-national companies, the Growth Sector includes mid- to large-cap companies, and the Aggressive Growth sector includes small- to mid-cap companies.  The strategy is concentrated, and typically includes approximately 20 positions, and 5% cash.  The strategy only invests in stocks, ADRs, and ETFs denominated in USD.  The All-Cap Growth Composite was created June 2015. The S&P 500 is a free-float capitalization-weighted index of 500 large-cap common stocks actively traded in the United States.  The index is shown as a general market indicator and may not reflect the same exposures as the composite. The investment management fee schedule for the composite is 2% on the first $250,000, 1.5% on the next $750,000, and 1.0% on the remainder.  Actual investment advisory fees incurred by clients may vary.  Further information regarding investment advisory fees is described in Part II of the firm’s Form ADV. Past performance is not indicative of future results.  The U.S. Dollar is the currency used to express performance.  Performance shown represents total returns that include income, realized and unrealized gains and losses.  Net of fee performance was calculated using actual fees.  Composite performance is presented net of foreign withholding taxes on dividends, interest income, and capital gains.  Withholding taxes may vary according to the investor’s domicile.  Policies for valuing portfolios, calculating performance, and preparing compliant presentations are available upon request. The annual composite dispersion presented is an asset-weighted standard deviation calculated using accounts in the composite the entire year.  The 3-Year Standard Deviation represents the annualized standard deviation of actual composite and benchmark returns, using the rolling 36-months ended each year-end.  The 3-Year ex-post Standard Deviation of composite and benchmark returns is not presented because the composite strategy has less than three years of history.