The quote by Andrew Coggan, PhD that is incorporated into the title of this article was made well over ten years ago, and the sport he was referring to was road cycling.  The same holds true in reference to the sport of distance running - in particular, race distances from 5K to marathon.

For most runners, races from 5K to marathon are executed at Functional Threshold Power (FTP) +/- 10%.

In athletes that I coach (genders combined), the ranges are as follows:

Further illustrating the point, Andrew Coggan, PhD has shared graphic depicted in Figure 1, breaking down the estimated percentage of Critical Power in which races would/could be executed: 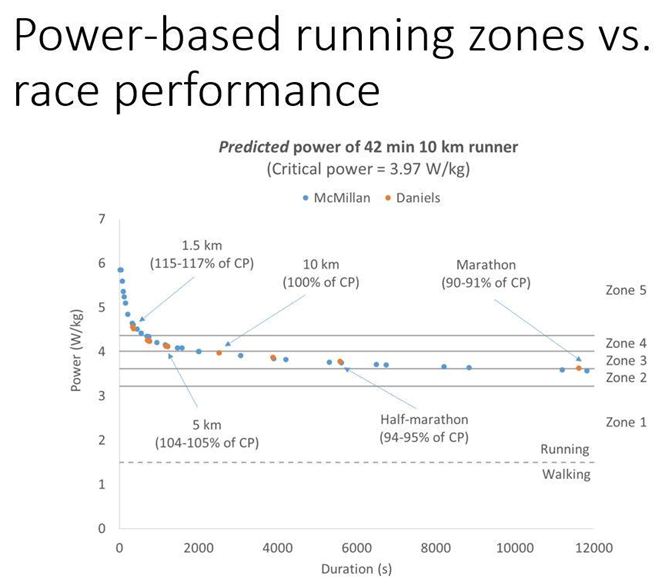 FTP is “the highest power that a runner can maintain in a quasi-steady state without fatiguing, where the duration may range from 30-70 minutes, depending on the individual” - Running Functional Threshold Power - A Primer.  Further, FTP represents an important aerobic marker - representing a physiologic state approximating maximal lactate steady state (MLSS).

The power range of FTP +/- 10% does seem to encompass the power range in which most runners execute races from 5K to marathon.  This power range lies quite comfortably in the predominantly aerobic area of the power-duration curve - all lower than the typical power that one would encounter “at” VO2max.

Looking at the aerobic contribution to power further, there are "2 common misconceptions in the exercise science and coaching professions. First, that the energy systems respond to the demands of intense exercise in an almost sequential manner, and secondly, that the aerobic system responds slowly to these energy demands, thereby playing little role in determining performance over short durations." - Energy System Interaction and Relative Contribution During Maximal Exercise.

Figure 3. Run FTP Contribution with TTE chart for a 14-15yo male distance runner

And, although the intended scope of this article is for distance running - between 5K and marathon - it is worth noting that the runner in Figure 3 races exclusively from 400m to 5K.  Even at the shorter races, the aerobic contribution to his maximal power is estimated to be 59% at 400m duration, 79% at 800m duration, 89% at 1600m duration.

However, the point is that races from 5K to marathon are typically executed at FTP +/- 10%, which, in turn, lends support to FTP-based training - at least for the aerobic components of the training program.

Andrew Coggan, PhD, has presented another graphic, which depicts the variability and range of individuals’ meanmaximal power-duration (MMP) values relative to their FTP.  (Figure 4).

Figure 4. Population-based power-duration curve with relative variability of individual in the population. 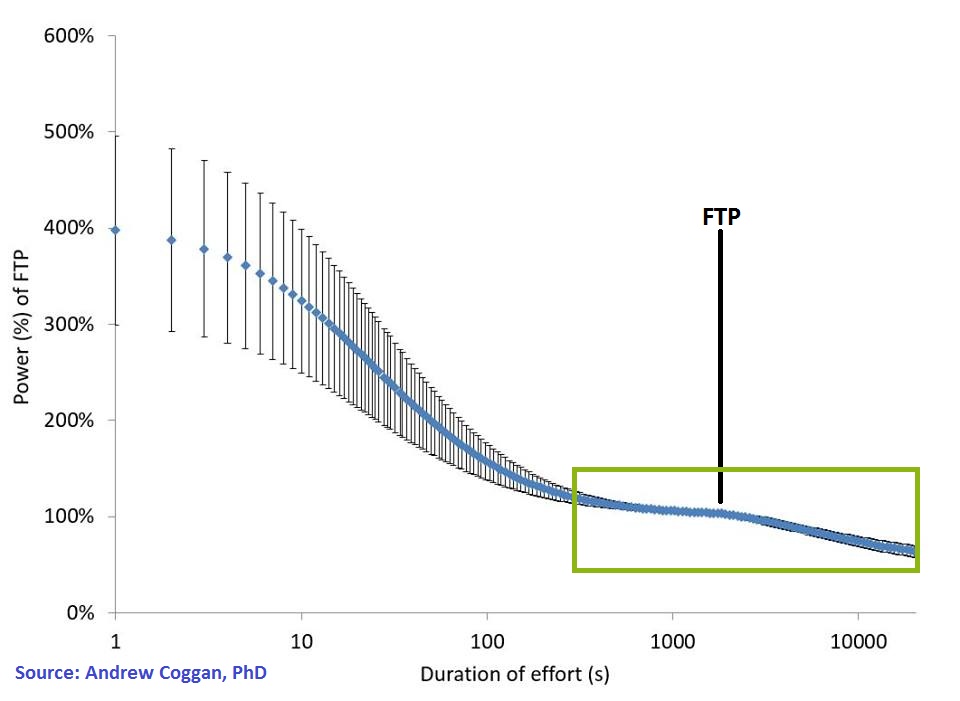 Within the box that I have added, one can see that there is relatively low variability of individuals’ MMP relative to their FTP.  It’s an aerobic sport, dammit.  For training prescriptions for 5K power to marathon power, prescribing as a percentage of FTP is supported, and likely quite reliable.

Using Palladino Power Project running power zones (Figure 5) for purposes of definition, prescribing training as a percentage of FTP is quite reliable in zones 1-4.  Zone 5 encompasses many runner’s 5K (bottom of zone 5) to 1500m power (top of zone 5).  Prescribing training as a percentage of FTP for training in this zone is likely reliable at the bottom end of the zone, but would be better guided by the individual’s own power-duration curve at the top end of this zone - depending on the intended training stimulus desired of the workout.  Certainly, for zone 6, training prescriptions are best directed from the individual’s own power-duration curve.  Zone 6, described as 117-150% of FTP, is for descriptive purposes only.

In terms of relative volume, most distance runners accumulate the majority of their training in zone 1 through the lower end of zone 5.  It’s an aerobic sport, dammit.  Of course, the event and the phase of training will impact the training distribution among the various zones.  Nevertheless, for events from 5K to marathon, training in zone 6 and 7 is a relatively small percentage of the total volume.

As an example, I present one runner training primarily for 5k events.  The training from January 1 through 24 is presented as a glimpse -  this is winter training.  Figure 6 depicts the distribution of the runner’s training, by percentage, into the various zones during the period of January 1-24.  The percentages in zones 1 through 5 effectively equals 100%.  The 2% of the training volume seen in zone 5 is at the lower end of zone 5.

Figure 6.  Training distribution, by percentage, in each zone for runner with primary 5k focus - Winter training,January 1-24.

In Figure 7, the same runner’s training over the same period is depicted in terms of duration in each zone.  While failing to round up to 1%, there were 2 minutes and 27 seconds accumulated in zone 6, anaerobic work, during the period January 1-24.

Figure 7.  Training distribution, by duration, in each zone for runner with primary 5k focus - Winter training,January 1-24.

In summary, in racing distances from 5K to marathon, and in training for them, aerobically generated power predominates.  It’s an aerobic sport, dammit!