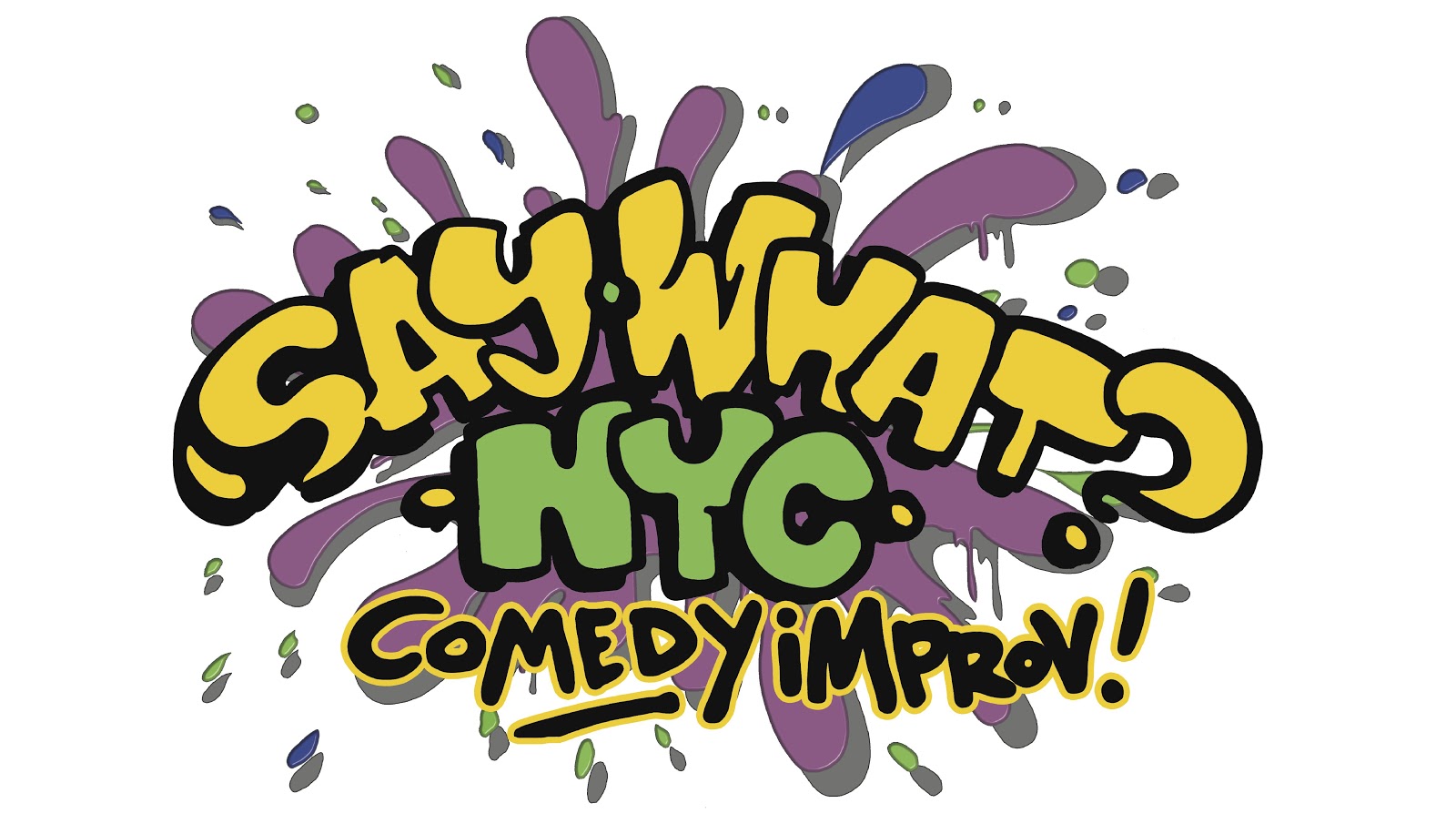 We love to make you laugh! Say What? NYC is a New York City based improv group comprised of the finest misfits comedy has to offer.

Hosted by one of our comedians, the cast perform an array of 3-5 minute improvised games, songs and suggestions made by the host as well as its audience. Our audience is encouraged to participate with suggestions, interacting with the cast and even being invited on stage. Performers use the information given and their insane imaginations to portray different characters as well as an array of scenes. These games were made popular by the tv show, "Whose Line It Anyway?".

Does your company need entertainment? Or a group building exercise? Do you have a private party that you would like to make unique? Then you have come to the right group. Say What? NYC is perfect for private parties and corporate events. Our rotating cast of extremely talented individuals will excite, entertain and astonish you! Come see why we are NYC's premier short form comedy improv group!

What better way to bring your team together than by teaching them a useful skill? Improv can go so much further than the stage! We teach games that train your company personnel to think outside the usual box and to go with their gut. Learning tricks and guidelines to successfully maneuver the corporate world is a gift. Give your employees a fun experience while teaching them to be original, imaginative, innovative and resourceful.

We have workshops ranging from 1-8 hours based on your needs. Contact us today!

Comedy Improv is a fun and different activity you can bring to your campus! We'll take any zany suggestions your students throw at us and run with it. We can even have them join us for a little fun! Workshops are a great way to show students how improv can be applied to the classroom and their future careers. We love collaborating with student organizations and catering the show to their needs. Whether you want a hilarious improv show or a fun and instructor workshop we are here to make your event a fantastic one!

Are you looking to stand out? Our brand of entertainment is unusual and inventive. We always have fun on stage, and that translates to an engaging show for you: the audience. We can perform at private gatherings, sweet sixteen parties, corporate get-togethers and private venues. You determine what type of content we should work with (or not work with).

Our audience determines our shows! Your suggestions take us on our adventure every time. While we try at almost all other times to do our show clean, without a huge amount of sexual content or vulgarity, when it's time for your bachelor/ette party we will let loose!

Our show goes where you suggest it to go. From prim and proper, to down in the dirt. Also, have a friend you'd love to see on stage? Blackmail pictures could be in the making! Definitely rated-R, though no clothing will be removed.

Say What? NYC regularly performs in some of NYC’s hottest nightlife establishments. For upcoming show dates and special appearances visit our website at www.SayWhatNYC.com

Say What? was founded in Wichita, KS, in 2006 by Sevans Martinez and Sarah Kallail. Their love for improv and the lack of comedy groups in the area, led to the birth of Say What?.

After a series of successful shows, Sevans decided to move to New York City, to pursue her own theatrical endeavors. Saying goodbye to her talented improv artists in Wichita, she made her way to the big city.

In 2011, Sevans again felt the need to create her own content. Using the Say What? format she renamed and rebranded the new Say What? NYC. Quickly casting some of the best comics in and around New York, Say What? NYC was ready to bring their brand of comedy to the people performing consistently at various venues throughout New York. With an ever-growing audience, Say What? NYC’s quest for a suitable venue has led them to their new home, Murphy’s Tavern located in the heart of downtown New York City. With time and knowledge, comes teaching. Now we teach others in the ways of short form improv.

July 2011 - Say What? NYC opened their very first show at the old Ninth Ward in the lower east side.

September 2011 - Say What? NYC moved to a weekly show at the Parkside Lounge- a venue known for their music and performance acts. This partnership would last for 3 years.

January 2015 - Say What? NYC left the lower east side to The Blarney Stone 8th Ave next door to Penn Station. They started performing on Saturdays, and continued until just recently.

January 2017 - Say What? NYC moved to midtown at St. Pat’s Bar & Grill NYC. They performed bi-monthly for a year and settled on a monthly show on the first Saturday of each month.

January 2018 - Say What? NYC began booking public and private workshops for corporations. They also are now performing frequently at The PIT Loft.

June 2019- Say What? NYC has their regular monthly show now at Murphy’s Tavern by Battery Park. 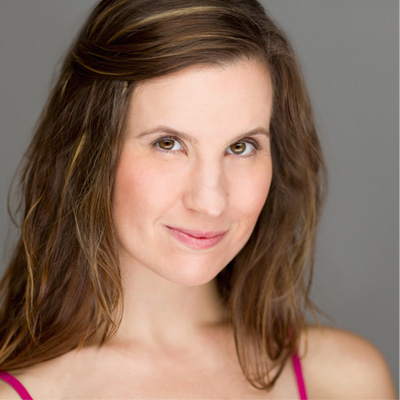 Sevans cast, taught and directs the amazing performers of Say What? NYC. She is also an accomplished voiceover, commercial and stage actress. You may have seen her throughout NYC in various Shakespearean pieces and bilingual shows. However, behind the mic is where she shines! Special thanks to her other half. Love to her family! 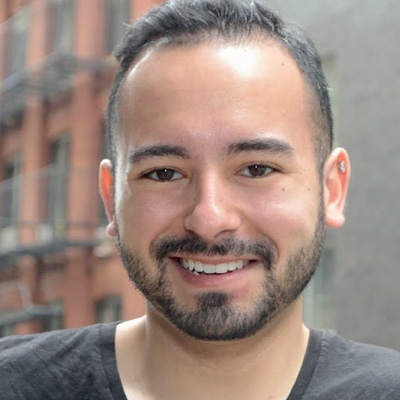 Jeremiah Jurkiewicz greatly enjoys being the assistant director of this zany little family! He has been dubbed the "daddy" of the group by Sam and he takes his role very seriously. Fortunately for everyone he lets loose when on stage and has a great time! 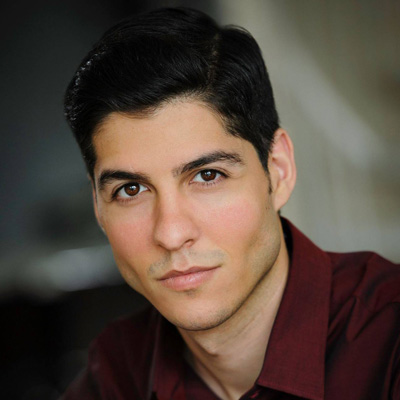 Ali Sattar is very excited to be working with the Say What? improv group! Ali is a graduate of the College of Staten Island with his Bachelors in Dramatic Arts. Ali's show, "Dreams My Father Never Dreamt" was his first original full length solo performance which premiered at the College of Staten Island. He also played the role of Oberon in the college's production of "A Midsummer Nights Dream", which was showcased at the Kennedy Center American College Theatre Festival in Baltimore. 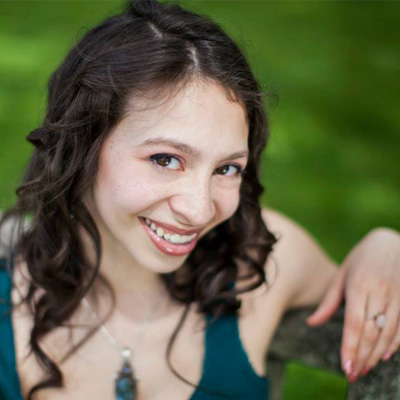 Danielle Hernandez is as much a performer as she is activist. Long time member of Say What? NYC Comedy improv group, she has relished an enjoyable three years performing at The Blarney Stone, The Parkside Lounge and now St. Pat's Bar and Grill! While not tickling the funny bone she's stirring food for thought on morning broadcasts for Water Awareness and Standing Rock. Follow her Facebook Live Feeds to stay updated! Comedy and truth are her passion and she invites you to join her along the road! 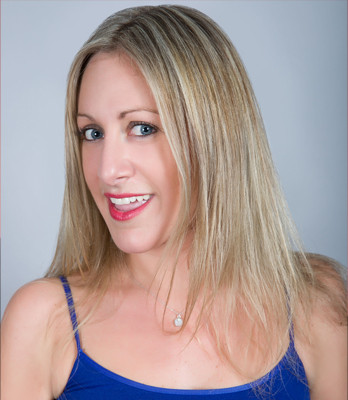 Samantha was born on a warm June night in a small town called New Jersey.  She graduated from Rowan University with a degree in Communications, specializing in television and film production.  She then moved to Manhattan to attend the American Musical and Dramatic Academy and pursue her passion for musical theater and comedy.  Lately, she works behind the scenes doing some TV production while trying to fit in as much improv and singing on stage as she can! 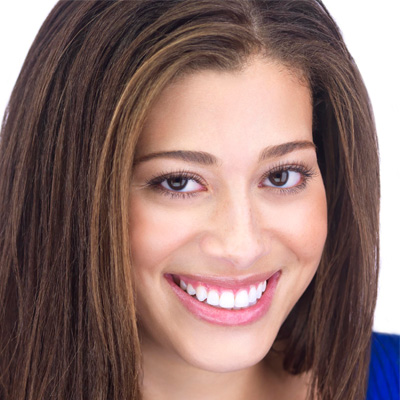 Tall girl in the big city. Born in Florida and now living in Queens, Meaghan graduated with a BA in performing arts from Sarah Lawrence College and studied abroad at the British American Drama Academy in London. Her previous works include the production of the play, Smoking Section, which was also accepted into The New York Fringe Festival 2011, ShadowBox Theatre’s African Drum, The Storm Theatre’s As You Like It, Gorilla Rep’s Joan of Arc, and Is There Room In Your Heart? at Teatro LATEA. www.imdb.com/name/nm3600365 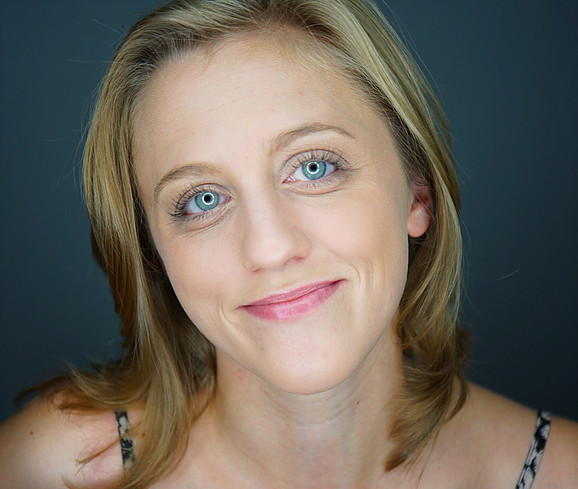 Alexis Di Gregorio lives to make people laugh. Coming from a comedic Improv Background, she has trained at The Annoyance and The PIT. She can't thank her family and friends enough for their support. Having done national commercials and regional theatre, it's almost like her friends and family will never be able to get escape her and her $15-42 cover. But at least everyone is old enough now to drink while she's performing. Her performance is enhanced with alcohol consumption....Academy Award Winning high drama. www.alexisdigregorio.com 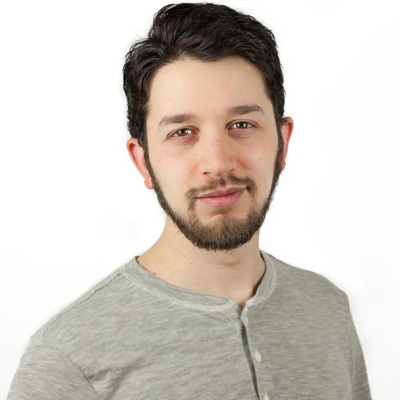 Joseph is honored to be a part of the Say What? Improv Group. This is Joseph's first foray into the world of performance and comedy, although he has written commercial ideas and comedy blogs for an ad agency, a digital studio, and for his own amusement. Born in a cave in Staten Island, New York, Joseph worked in the hair gel mines until he graduated from the College of Staten Island. He occasionally writes a blog called “Musings from Suburbia” at www.joehersh.wordpress.com.

3 videos, a commercial and a sizzle: 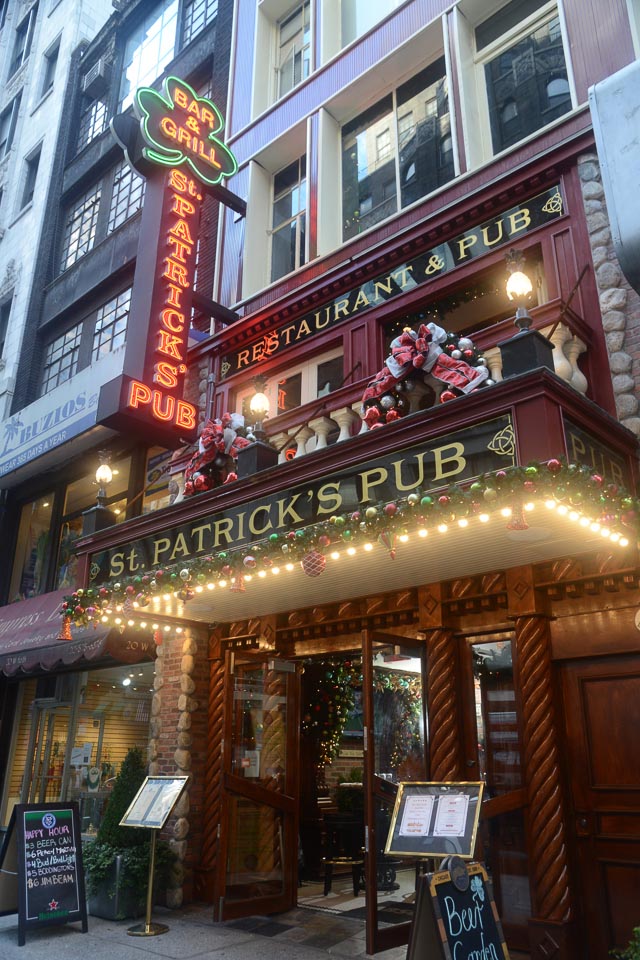 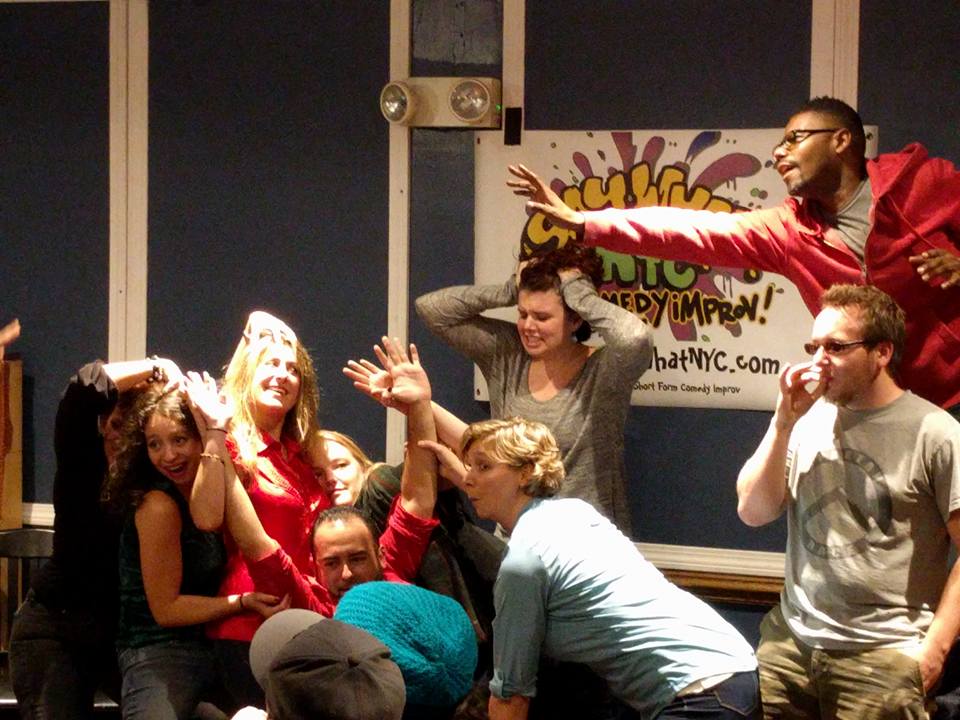 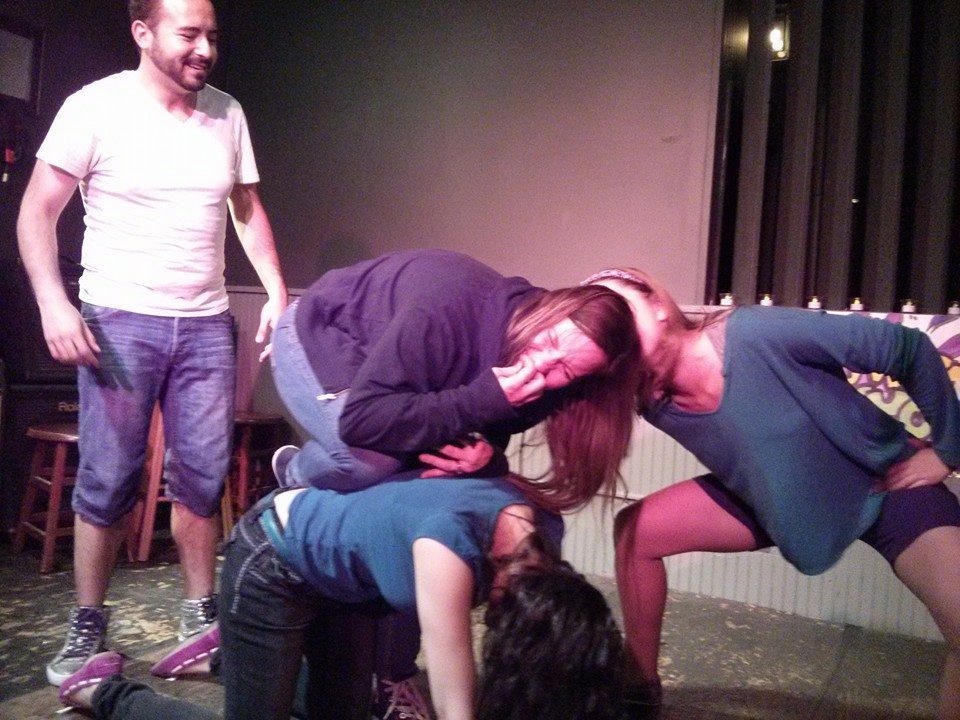 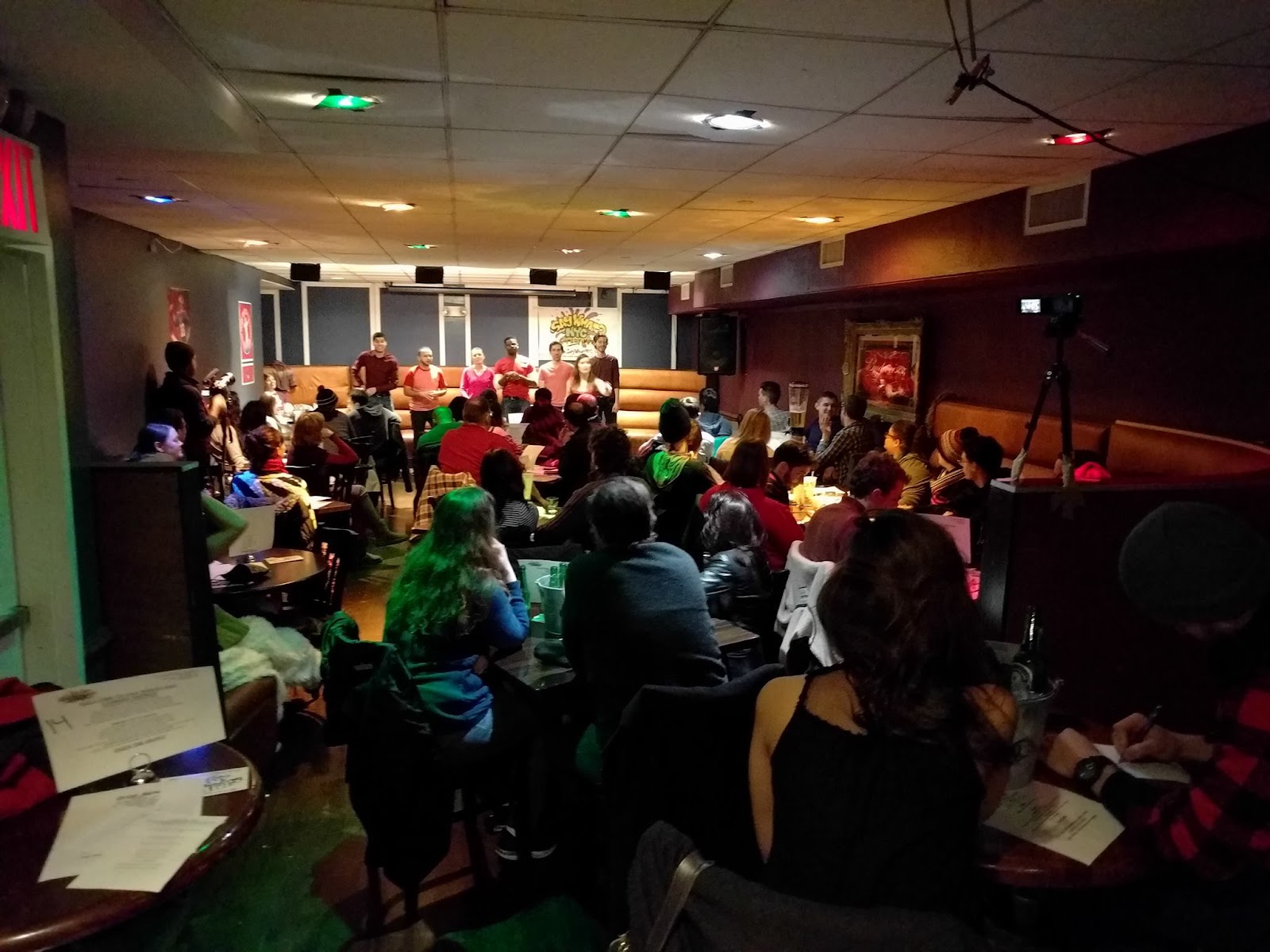 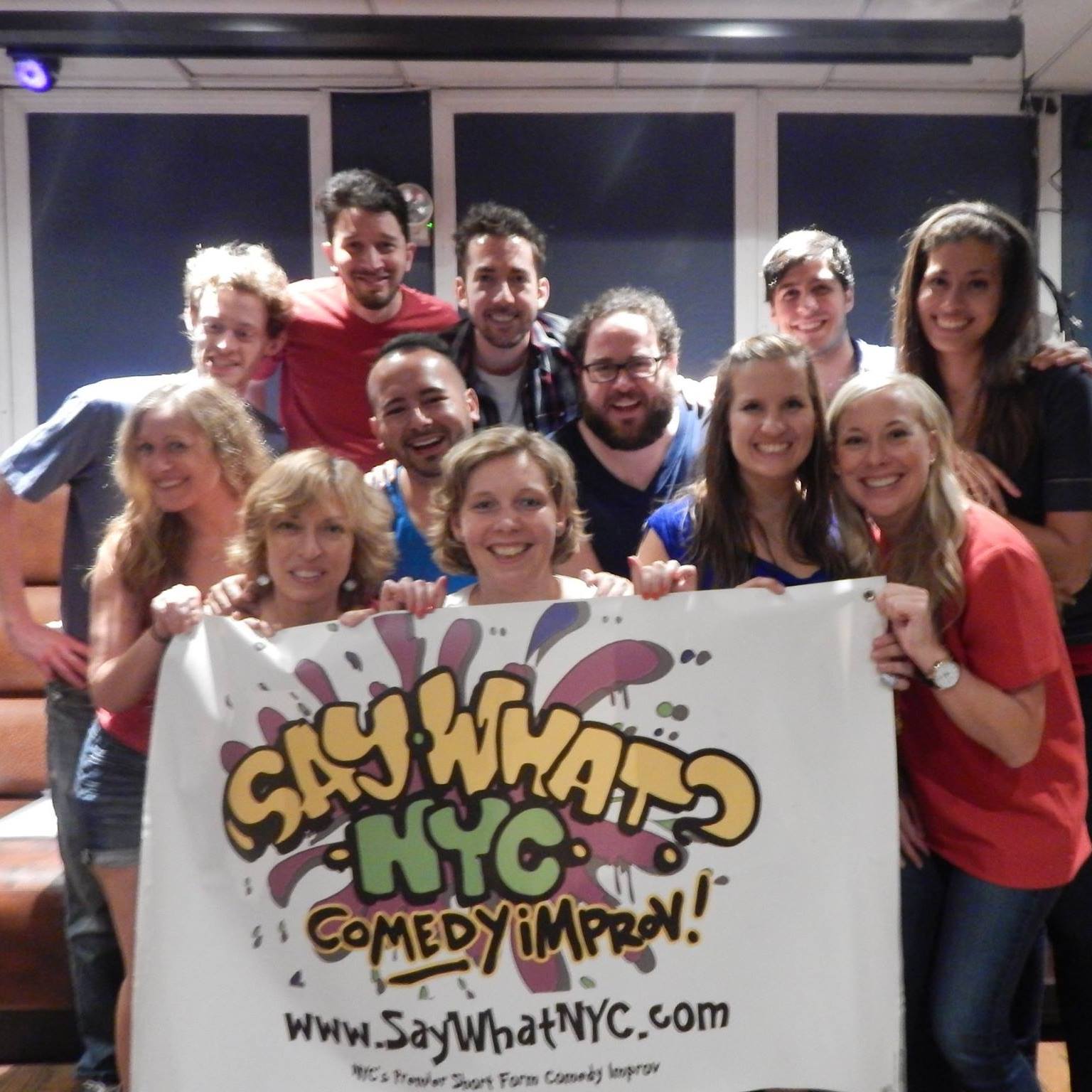 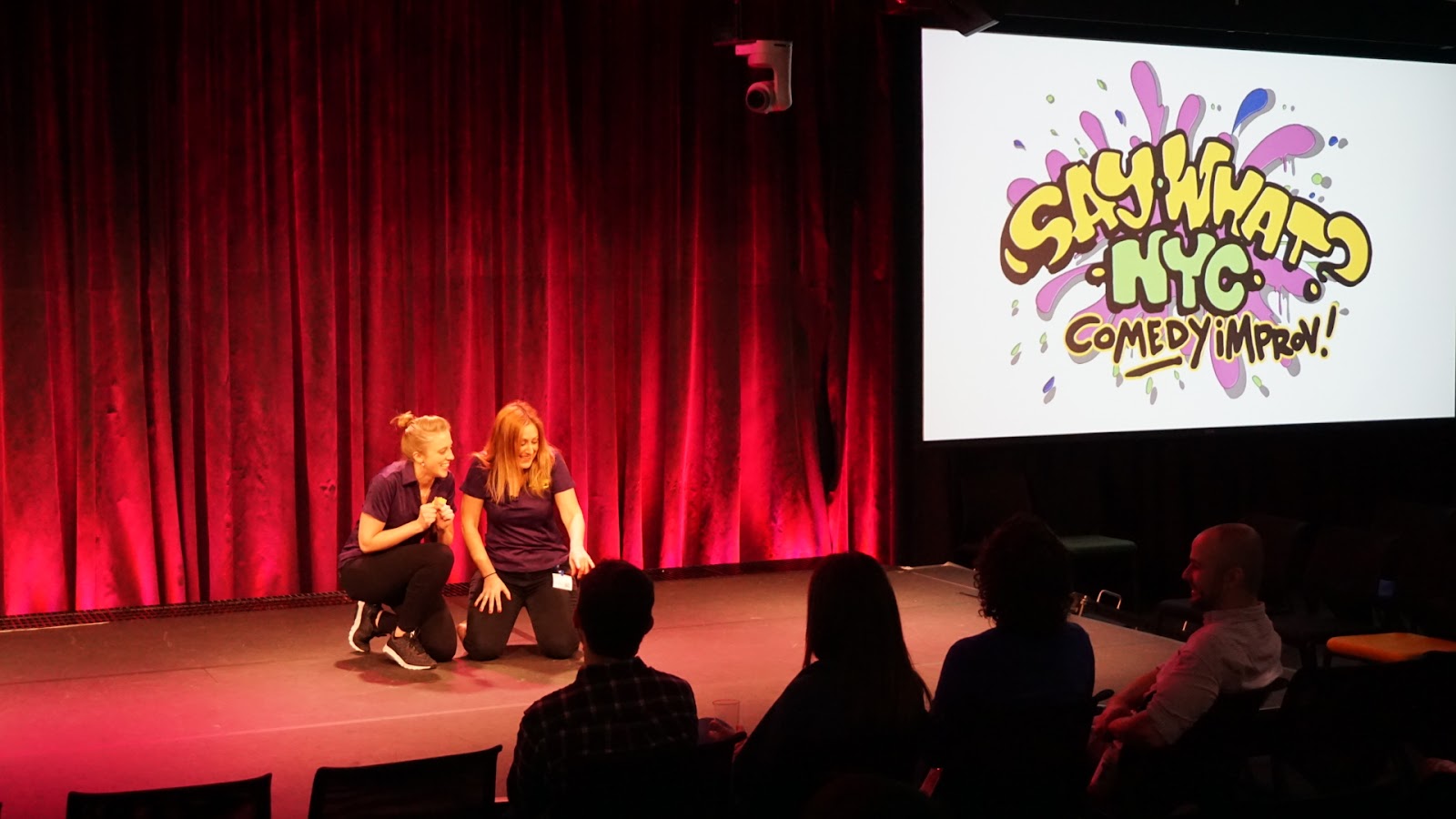 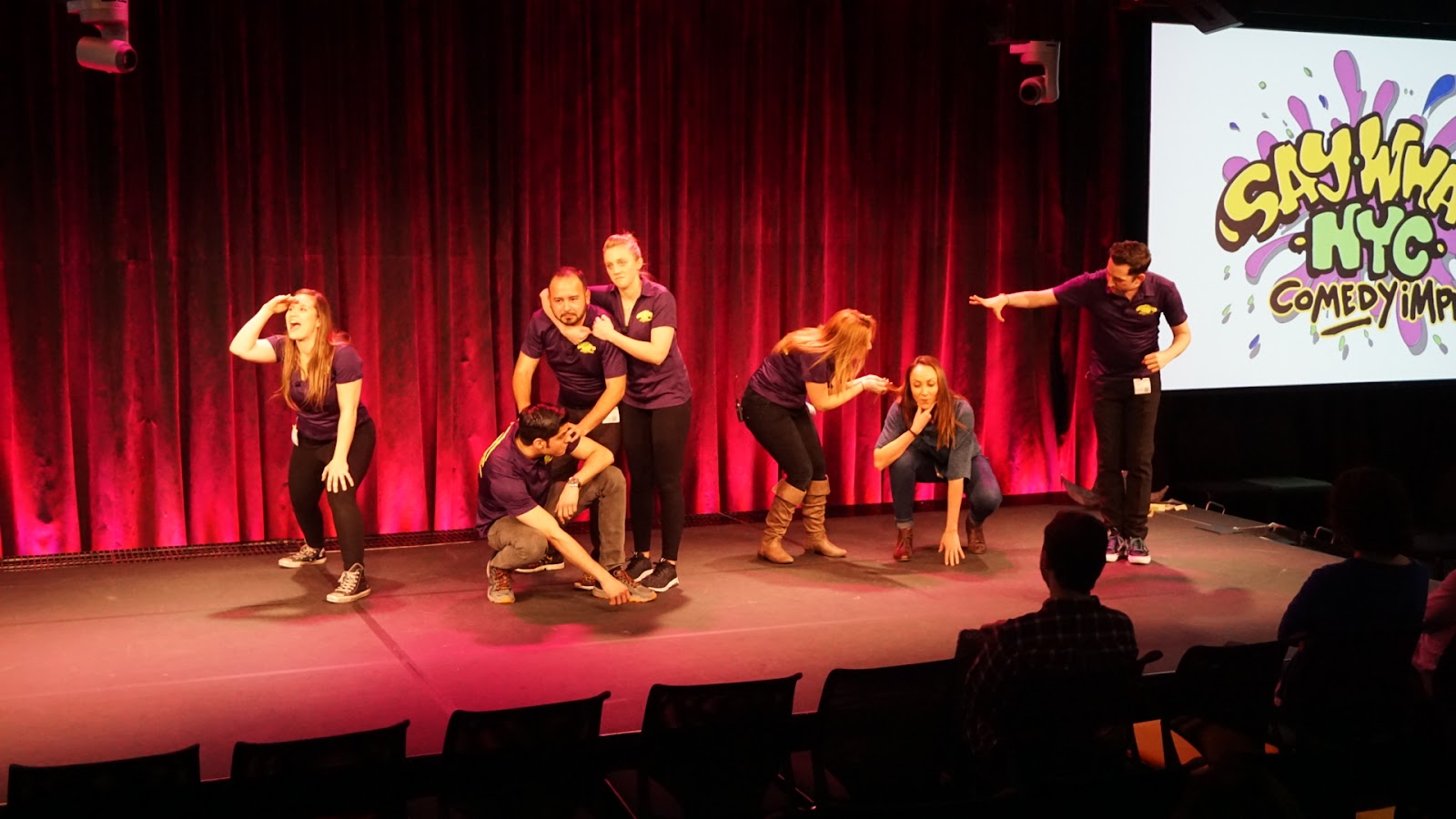 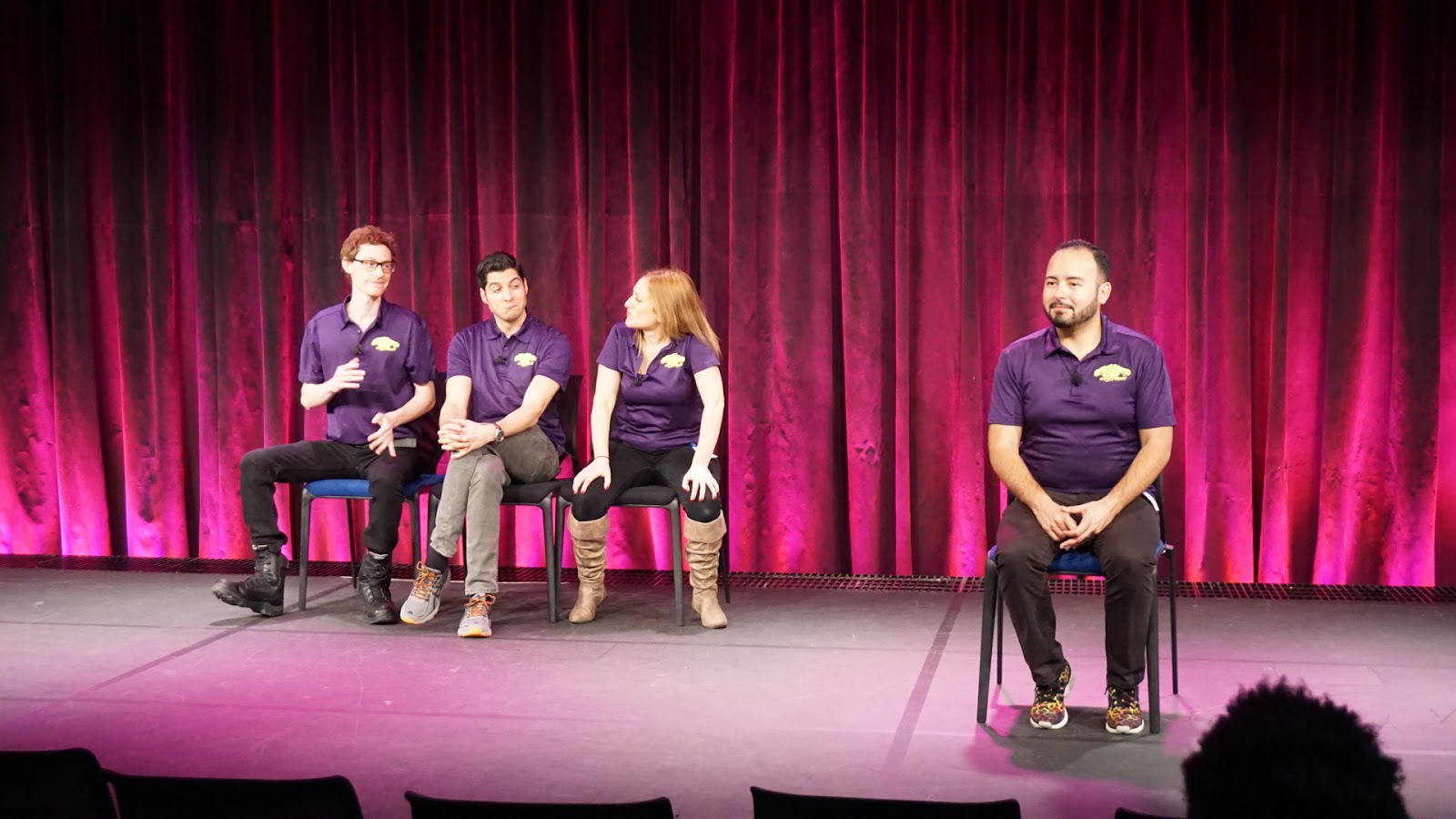 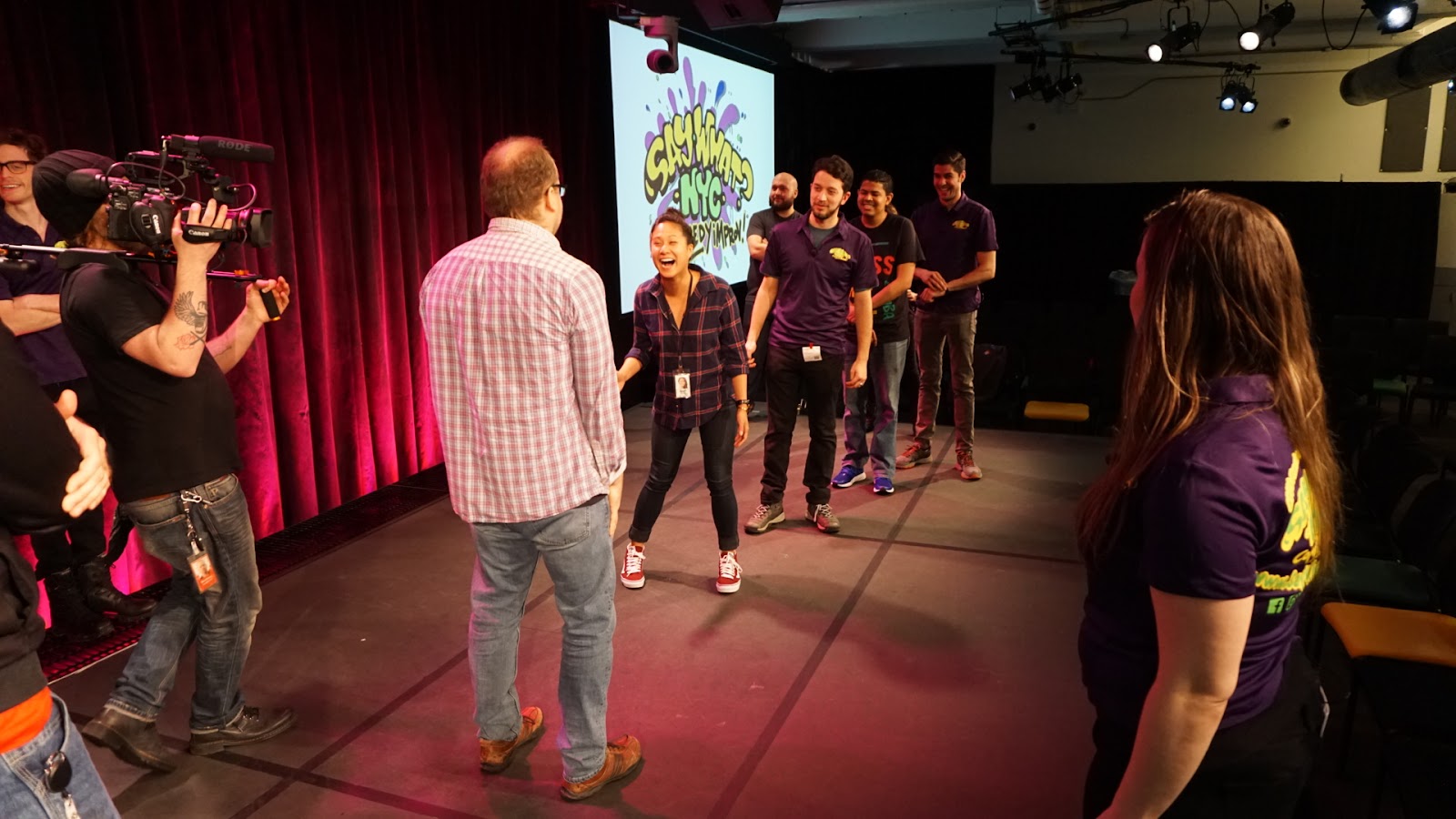 “They always give me the giggles and guffaws!!”

“Excellent and has so much fun. I was glad to be a part of the show too!”

“All of the improv actors had their own styles, and they all blended together very well. Definitely can't wait to come back!”

“The show ROCKED MY FACE OFF!”

“Show is fun, prices are reasonable.”

“Very fun and very freeform. The most fun I've had in a while!”

“It was hilarious. I laughed so hard and will back back again!!”

“Awesome- Hope to see your company on SNL soon! :)”

“Utterly hilarious, thank you for the improv experience! Jeremiah has the best giggle.”

“The show was very great and made me laugh. Keep up the good work!”

“Actors, actresses, cast and crew are like a home away from home...we call that hospitality.”

What an awesome night!!! I enjoyed the show- I'll be back!”

Say What? NYC is also rated on Google.com and Yelp.com. We have a strong ratings.

We are rated 5 stars at NYMag.com

Pricing for Say What? NYC

*If you are booking within New York City we don’t charge travel or accommodation pricing.

We offer flat rates for up to 75 people. More than that we offer a per person rate. To calculate what the total would be, just multiply the number of people in your group times the appropriate rate. (Unless your group is within the 75 person range. Then it’s just that flat rate for the entire program). 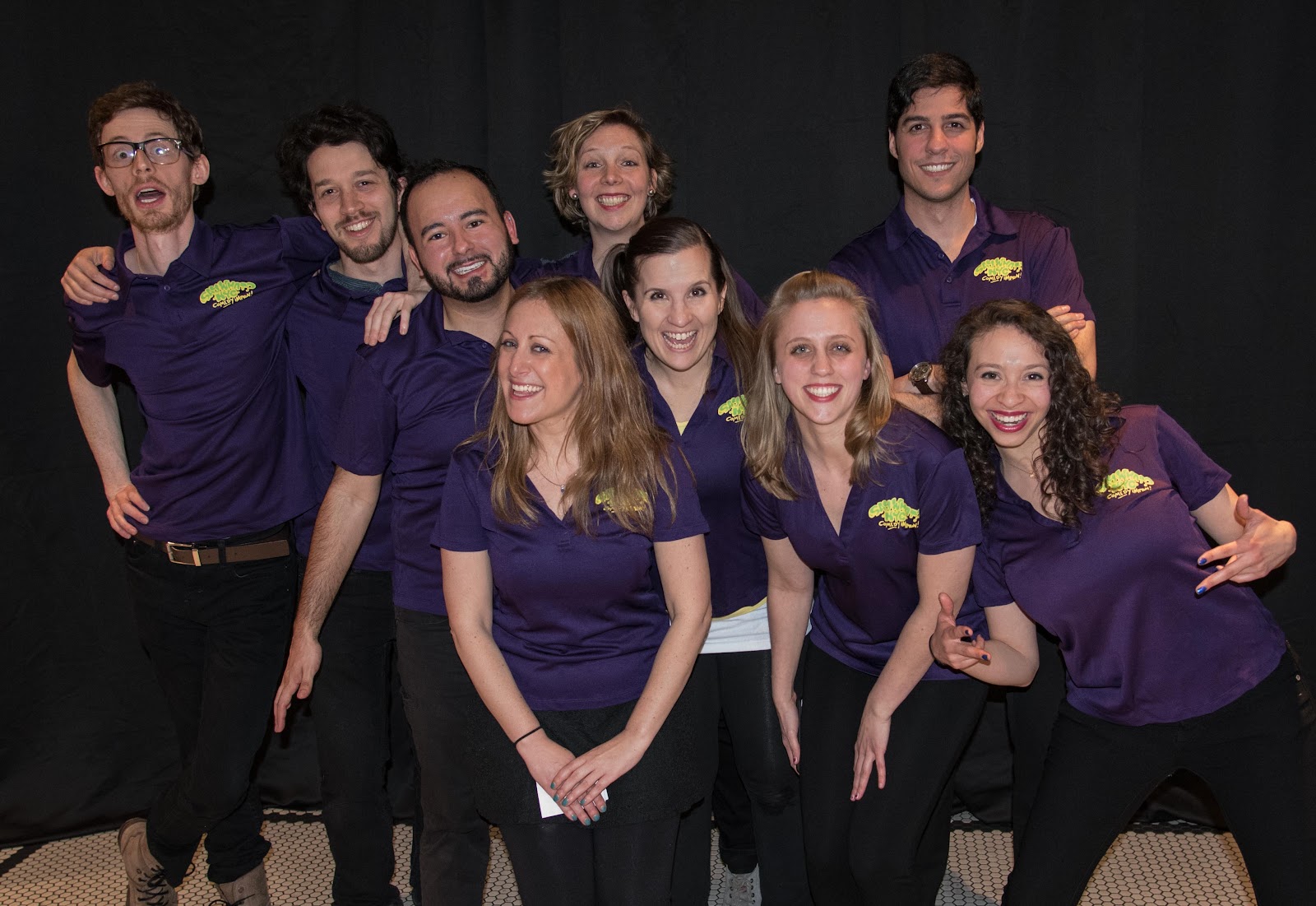 Thanks for checking us out!