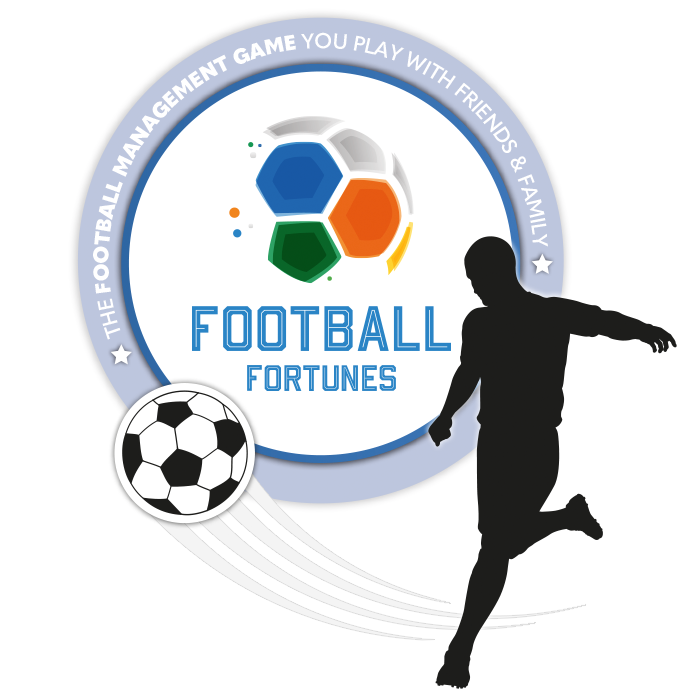 Football Fortunes is a football management computer and board game suitable for two to six players based on the classic 1980s football management game Brian Clough’s Football Fortunes. In the game each human player takes on the role of a club manager. The object of the game is for each manager to successfully steer their team through the season using their skills to make their team stronger as the game proceeds.

Each manager competes with human and computer controlled teams in a league and also both domestic and European cup competitions.

The winner of Football Fortunes is the manager who survives to the end of the game, and has the highest number of game points. Game points are points awarded by the Football Fortunes app, based on each managers performance in League and Cup competitions and on the amount of cash they has left at the end of the game. It is very important not to confuse game points with points obtained by winning league matches. It is not enough to do well in the league.

The winner of Football Fortunes will be the manager who excels in all aspects of their job. The main aim of every manager must be to create as strong a team as possible. They do this by increasing the total star rating of their playing squad. They must buy from and sell to other managers, borrow and loan players, buy players in transfer windows or coach and improve youth players all while coping with problems thrown at them by movements on the game board.

They must do all this shrewdly and with skill. They must resist the temptation to spend carelessly, or sell players too freely. Any action which results in poor team performances or low cash levels will cost them game points at the end of the game. Above all their team must not run out of money as bankruptcy means the sack!

Ready to play? To get started press Start The Season on the homescreen of the app. 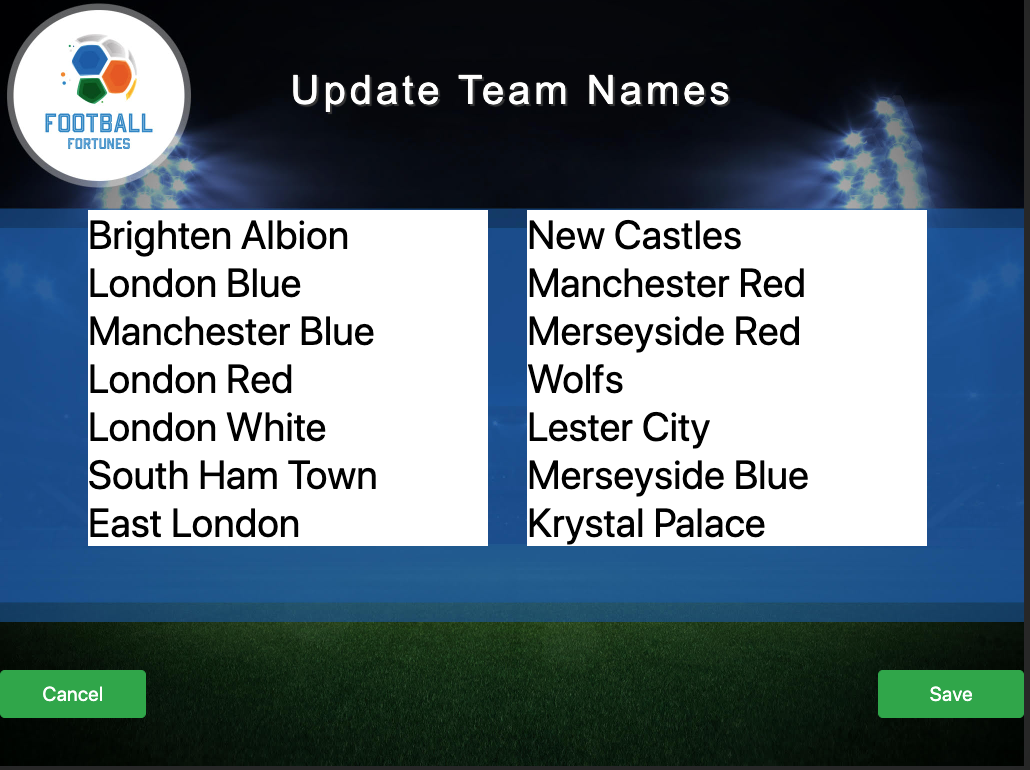 Each manager’s initial team lineup and player abilities will be determined by the Football Fortunes app. Managers will be assigned an initial squad of 11 players with various star ratings and also two Youth Players who begin as zero star players but can be upgraded later. Bear in mind that Youth Players can play in any position in your team apart from in goal.

Each manager will also begin the game with a zero star rated Coach on their staff. This Coach can be upgraded at various times in the game usually under a Manage Staff scenario. 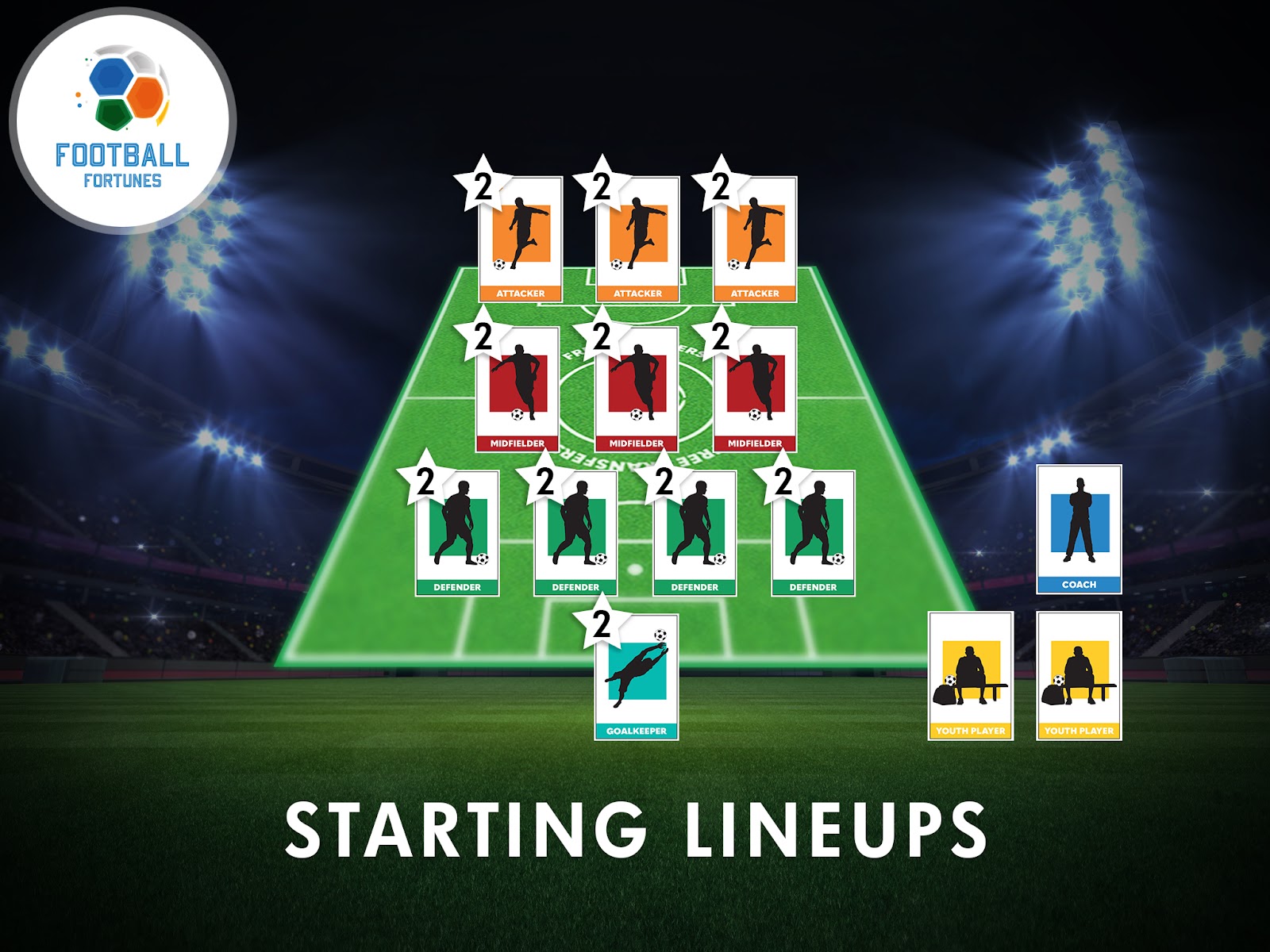 Managers should also choose a player token to move on the board. Unused player cards should be shuffled and placed out in piles on the game board. The Youth Player cards are placed on The Academy section of the game board and are always separate from the ‘senior’ player cards.

A key objective in Football Fortunes is to build a strong squad of players who can help you to win the league and cup trophies that will ultimately see you win the game. This can be achieved in a number of ways, from winning highly-rated players in auctions to developing Youth Players in your Academy or perhaps a blend of both.

Whatever your approach to squad building you will need to make some important tactical decisions to help you win games.

First you must choose your team’s formation. There are a number of formations available in the game from the very attacking (3-4-3) to the defensive (5-3-2). Your formation might be influenced by your opponent or perhaps you’ll adopt a particular philosophy (all out attack for example) and pursue players who will help you to play this way. 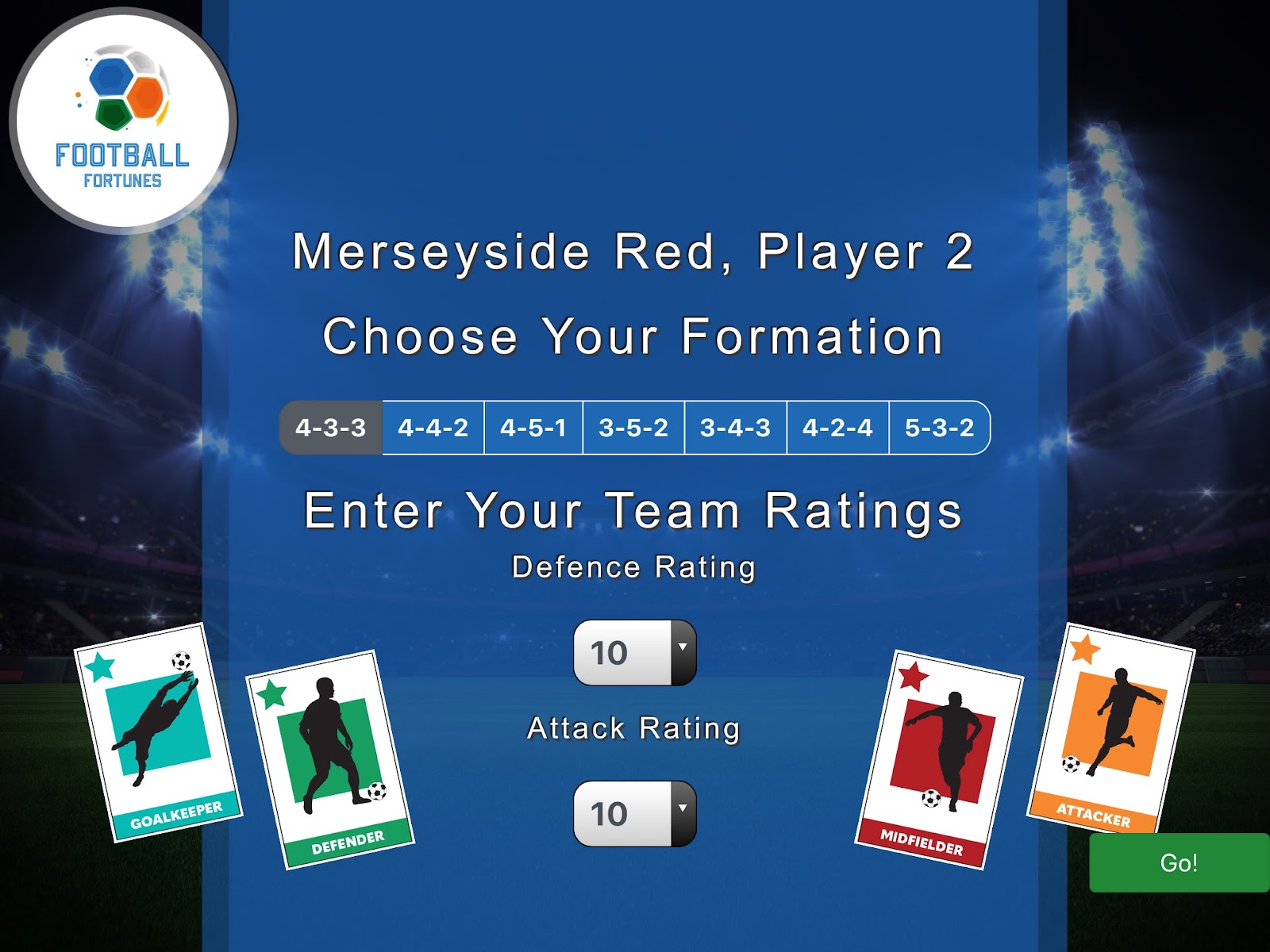 Before each fixture managers will enter their team ratings into the Football Fortunes app. There are two ratings, defence (which is the goalkeeper plus defenders in your team) and attack (which is the midfield players plus the attackers.)

Your Coach’s star rating is added to either defence or attack depending on your tactical approach to give a boost to your intent.

Remember that Youth Players can be played in any position apart from in goal, making them a vital part of your squad.

The game begins with the summer transfer window and a player auction per manager whereby a player card is turned over in turn from the general pile of players and bid on by managers. The highest bidder will win the player’s signature. In the case where there are less than four managers playing the game there will be a minimum of four player auctions in transfer windows. So for two managers, two auctions each per transfer window.

Players are rated from 2-5 stars depending on their ability with each star being worth £20m in transfer value. The bidding must start at at least this value in transfer windows. So a two star player will be worth £40m, a three star £60m etc. Youth players have no minimum value in auctions their value starts at £0.

If no one wishes to bid on a player in an auction they are put into the Free Transfers pile in the middle of the game board where they can be signed by players who land on the Start square later on. 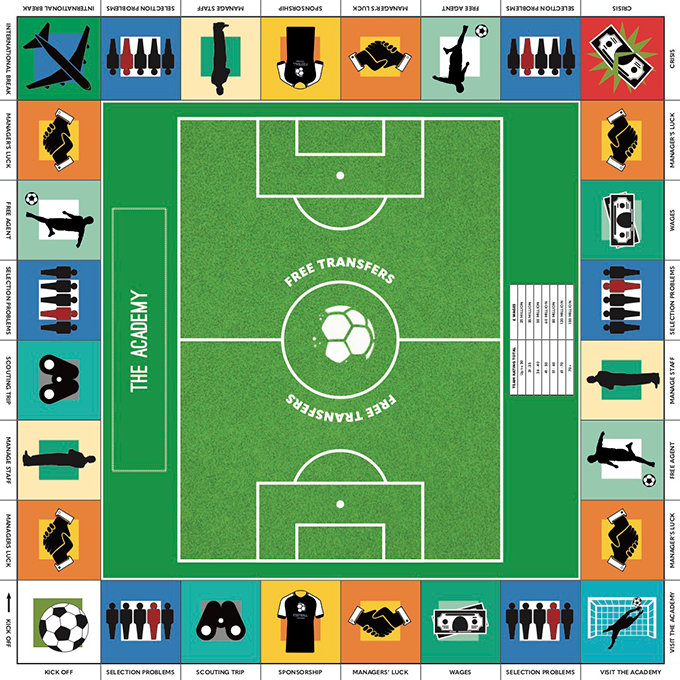 There are various squares on the game board that can affect the manager’s club, playing squad and more.

This is the beginning square on the game board. Players who have left clubs on Bosman Free Transfers or not bidded on during auctions can be signed by managers who land here. Note that managers can only sign one Bosman Free Transfer at a time from the free player pile.

Selection Problem cards are drawn randomly by the Football Fortunes app when players land on this square. Selection Problem’s cards directly affect managers playing squads and can be positive or negative in nature.

The Manage Staff square allows managers to perform multiple actions in the game.

A scout can be hired during a Manage Staff turn at a cost of £20m.

Managers can upgrade the club’s coach at a cost of £20m per star rating.

There are no one star coaches, players or youth players in the game hence it is necessary to upgrade both coaches and youth players to two stars to begin with.

Landing on the Visit the Academy square allows managers to take a free Youth Player from the pile in the Academy on the board and also to upgrade Youth Players by the star rating of their coach at a cost of £20m per star. Note that as there are no one star players or coaches the first upgrade must be a minimum of two stars at a cost of £40m.

For example if the Coach is a three star any number of Youth Players can be upgraded by three stars, at a cost of £20m per star, to a maximum of five stars per player. Note that managers can only have five youth players in their squad at any given time.

Landing on the Free Agent square triggers an auction whereby the Manager turns over a player from the top of any senior player pile for auction, Youth Players cannot be free agents in this way. As in transfer windows players in a Free Agent auction cost £20m minimum per star rating.

The Sponsorship square means that the manager gets £50m from a new sponsor, paid by the bank.

Landing on the Wages square means you have to pay all of the Players, Coach and Youth Players in your squad including those on the Transfer List. Add up all of the star ratings and refer to the wages table on the gameboard for the amount owed.

Landing here means you have the day off!

The square to avoid! Landing on Crisis means that one of a number of crisis scenarios will befall your club!

Players who have a Bung token can play it to buy their way out of any Selection Problem, Manager’s Luck or Crisis scenario. Note that players can only hold one bung token at any given time.

Players who have run out of money can still loan or sell players to other managers for agreed fees and durations which might help them to stave off bankruptcy but it is better not to overspend! If a manager runs out of money and can’t raise funds they are sacked from their club and their team continues to enter the team ratings they had when they were sacked for the rest of the game.

Players are not permitted to loan each other money under any circumstances.

Managers can have a squad of any size but they may only have a maximum of five youth players in their squad at any given time.

The manager who wins the game will be the one who has performed best in the various competitions winning leagues and cups etc. In the event that two managers finish the game on the same amount of Manager’s Points then their cash and assets will be counted and the manager with the largest bank balance will win.

Updated rules, app links and latest news on the game can always be found on the website at https://www.footballfortunes.co.uk and in the Football Fortunes app under How To Play > Rules of the Game