Many investors choose to hedge the foreign currency exposure associated with foreign equities by purchasing hedged ETFs.  Today I will look at this from the perspective of a Canadian investor and in particular how such hedging affects the drawdowns in $CAD terms that such an investor would have historically experienced.  As we will see, hedging foreign currency exposure, in particular $US exposure, would have increased past drawdowns in $CAD terms and made holding foreign equities more painful during corrections/bear markets.

We can see this in the table below that looks at corrections/bear markets in $SPX since 1980 and how $CAD has performed during such periods. 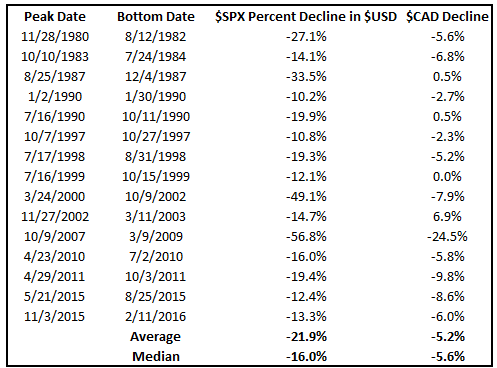 As can be seen, there have been 15 declines of 10% or more in $SPX since 1980 (not including the current decline).  In 11 of those declines, $CAD also declined.  In 1 occurrence, it was flat.  In 3 occurrences, it went up.  Only once did it go up significantly (2002).  In general it has fallen, usually significantly, during declines in $SPX.

For Canadian investors that did not hedge their currency exposure, their drawdown in $CAD terms was often much lower than that which they would have experienced had they hedged their exposure.  They experienced much less pain than those who hedged. This was particularly true during the financial crisis in 2008/9 when $CAD dropped 24.5%. 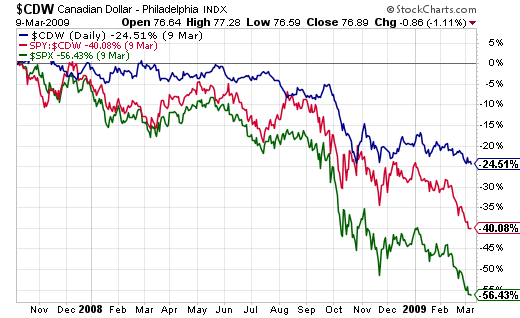 In effect, the fluctuation in the value of $CAD during periods of market strength and weakness smooths out the returns of $US equity holdings for Canadian investors provided they do not hedge their foreign currency exposure.   This is useful because limiting drawdowns reduces the risk of bad behaviour, like selling out at the lows.  It also means that Canadian investors that do not hedge need to hold less bonds to limit their drawdowns, especially if they hold $US denominated bonds.

Again, this can be seen through the performance of the ETFs TLT and SPY during the crisis in $CAD terms. 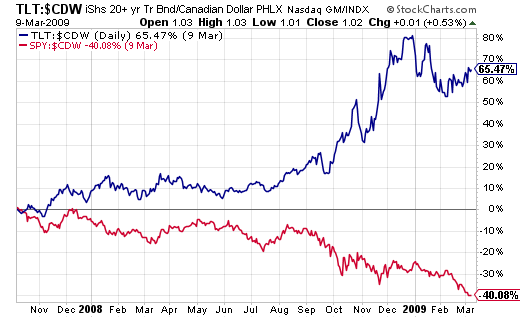 An unhedged Canadian investor who held a portfolio of 60% SPY/40% TLT would have gone through the financial crisis essentially flat in $CAD terms.  Obviously, this is not representative of the typical portfolio a Canadian investor is likely to hold, but it illustrates the point that for Canadians foreign unhedged equity and bond exposure in traditionally risk off currencies like the $US will likely help to smooth out portfolio returns in $CAD terms.

Of course, over the long term, hedging may or may not be beneficial in terms of increasing or decreasing total returns, depending on how $CAD performs over the long term.  If $CAD goes up over the long term relative to other currencies like the $US, then hedging will increase returns.  But assuming $CAD continues to be a risk-on currency, hedging foreign currency exposure will increase the volatility of foreign equity returns, both up and down, in $CAD terms, which is generally undesirable.