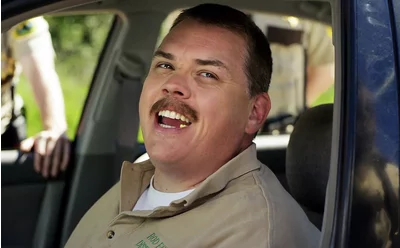 In the fictional town of Spurbury, Vermont, five Vermont state troopers patrol a 50-mile section of the highway. While troopers Arcot Ramathorn and the rookie, Robert "Rabbit" Roto are tormenting a group of men for smoking marijuana, they encounter a crazed attacker, who is revealed to be their co-worker MacIntyre Womack playing a prank on them. Back at the station, they are chastised for a lack of arrests by their boss, Captain John O'Hagen, who warns them that they risk being shut down. They also torment the radio dispatcher, Rodney Farva, who has been suspended. While investigating a Winnebago, they encounter a woman who died from a drug overdose with a tattoo of a monkey. Once outside the trailer, the state troopers encounter their rivals, the local Spurbury police, with whom they compete for arrests.