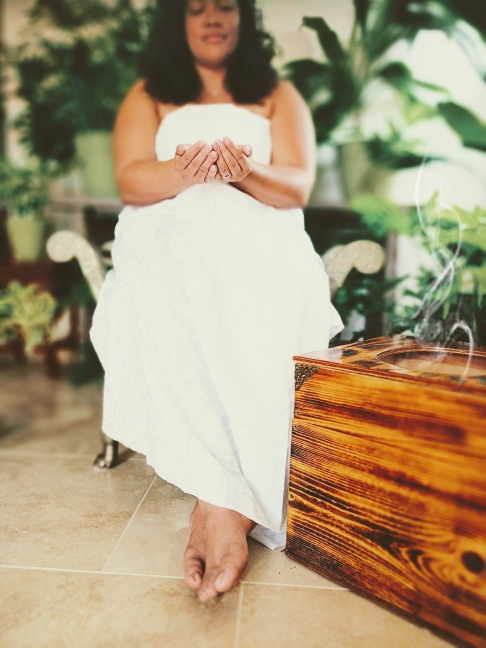 For centuries, women across the globe have used vaginal steaming to assist with postpartum recovery. This practice is experiencing a resurgence in popularity in the US but obstetricians and gynecologists remain largely unfamiliar with the practice and are unequipped to provide informed advice to their patients on its safety and efficacy. For this reason, clinical studies on vaginal steaming are in high demand. The following study was designed to provide a foundational exploration of the impact of vaginal steaming on a number of postpartum healing indicators. The study’s findings indicate that vaginal steaming has a positive impact on a number of postpartum healing indicators, including blood pressure, pulse, uterine restoration, reduction of weight and waist size, healing of tears, gapping and swelling, the expulsion of lochia, bowel regularity and hemorrhoid reduction. Further studies are required to confirm these foundational findings, to test the same indicators with a larger sample size and/or a longer term study, and to repeat the study with fewer variables.

Vaginal steaming is a process that involves boiling water in a pot, allowing the water to cool to a comfortable temperature, then sitting, squatting or standing over the pot so that the steam can reach the vulva, vaginal canal, perineum and anus. The water is often infused with minerals and/or herbs to enhance the healing qualities of the steam. This process has a lengthy and well-documented history throughout Africa, Eurasia, Oceania and the Americas.

While vaginal steaming became relatively obscure in the United States after the marginalization of midwifery in the 19th and early 20th centuries, it remained a common practice among women without access to the medical establishment. As it enjoyed a continuous relevance in many other countries, immigrants to the US also continued and furthered the practice within our borders. In particular, communities with South Korean, Mayan, Sudanese, Cambodian, Eritrean and Haitian migrants kept the practice alive and growing.

In the early 21st century, vaginal steaming became popularized as a luxury spa treatment despite its continued use in marginalized communities as a means for preventive reproductive care. As its popularity grew, media outlets began asking medical practitioners to comment on its safety and effectiveness. With little to no background information on the practice they could only respond that they had no official proof that vaginal steaming was either helpful or harmful.

Despite the repeated phrase of ‘no proof’, calls for clinical trials to be conducted remained outside of the medical community. For this reason the Peristeam Hydrotherapy Institute (PHI) commissioned the following study to provide a foundational design to explore the impact of vaginal steaming on postpartum recovery. It is the intention of the PHI that this study will encourage the medical research arena to commission further studies into the use of steam in preventive and procedural reproductive care and maternal health.

A licensed and certified professional midwife conducted pelvic exams on eleven (11) postpartum clients. She collected data on the following postpartum health indicators: blood pressure, pulse, fundus size, waist size, weight, damage to the labia, lochia, sutures, uterine contractions, pre-eclampsia, breast pain, milk supply, bowel movements, hemorrhoids, bladder voids and incontinence. These particular indicators were selected for inclusion based on a number of factors. The study defines the postpartum recovery period as beginning immediately after giving birth until six weeks postpartum. This time period was selected because the mandatory “six week check up” is when a standard postpartum medical evaluation is conducted resulting in approval to return to normal sexual activity. This medical evaluation includes the following indicators: regulating blood pressure and pulse, ability to urinate and make a bowel movement, suturing tears and weight. Midwives also monitor a number of postpartum indicators in the same six week time period, including the reduction of uterus size its original position below the pelvic bone, breast milk production, and lochia expulsion. Additional indicators of recovery included in the study are common postpartum symptoms such as restoration of the labia, uterine contractions, suture healing, waist size, breast pain, incontinence and hemorrhoids.

Participants were recruited via advertisements in doula and midwifery networks, vaginal steaming networks, and doctors’ offices. Eighteen women in all were recruited, twelve participated in the study and eleven completed the full six weeks of the study. All participants fully consented to taking part in the study. Study participants’ ages range from 25 to 41 years old with a median age of 35.3. They represent a broad spectrum of racial/ethnic backgrounds, income brackets and educational attainment. The vast majority of participants are in long term monogamous relationships (including marriage); one participant was single. Approximately half of the participants’ pregnancies were planned. One third of participants had home births and two-thirds had hospital births. All births were vaginal; none were cesarean. Participants’ maternity leave varied widely and included no leave, 4-6 weeks, 2-3 months, 4 months, 5 months and 6 months.

Study participants were gathered using a non-probability voluntary sample. Despite the sample’s diversity, its size renders it unlikely to be representative of the national population. The study’s methodology was not reviewed by an institutional ethics board.

Some indicators in this study are measured in averages; for example, the data provided on blood pressure, pulse, weight and waist size are the average values for each group. In other indicators, a scale was developed and the sum of the group’s scores is presented as the measurement. Due to the small sample size, results may not be representative of all women who have given vaginal births.

There were some indicators that had variables that the study design did not predict, such as the impact of participants’ use of stool softeners on the bowel movement data. For this reason, some findings may officially be proved inconclusive.

Additional indicators that were originally considered for this study included postpartum depression, comfort returning to sex, pelvic organ prolapse and healthy period return but they were beyond the scope of measure for this study.

The uterine fundus is the part of the uterus that is furthest from the opening, or the top of the uterus. During pregnancy the uterus drastically changes shape and size. The fundus moves above the pubic bone and rises as high as the sternum. Fundal height and width is often used as an indicator for both the progress of the fetus’ growth before delivery and the progress of the mother’s recovery after delivery. 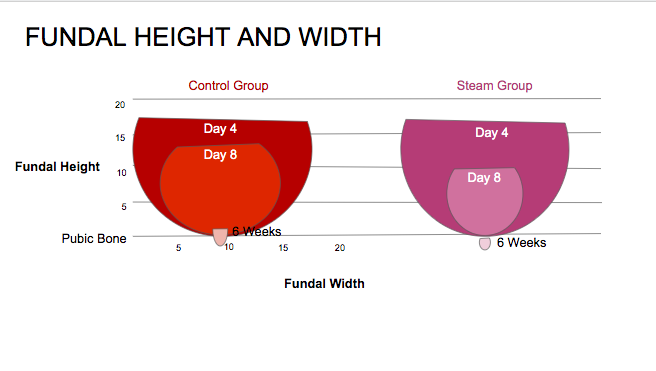 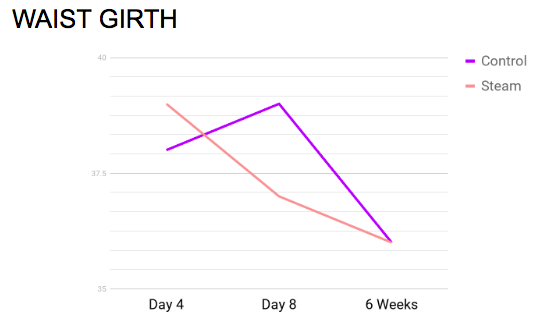 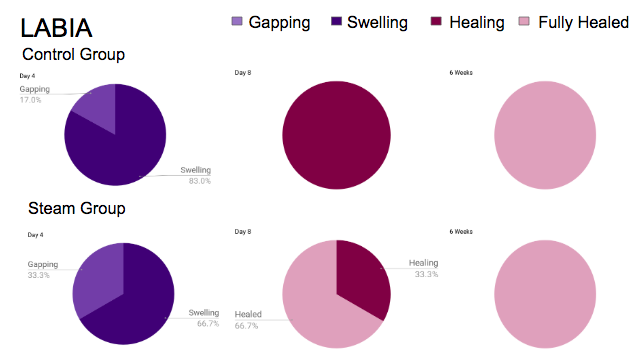 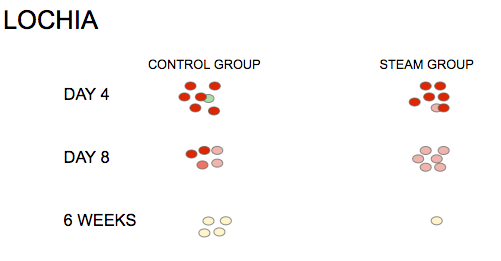 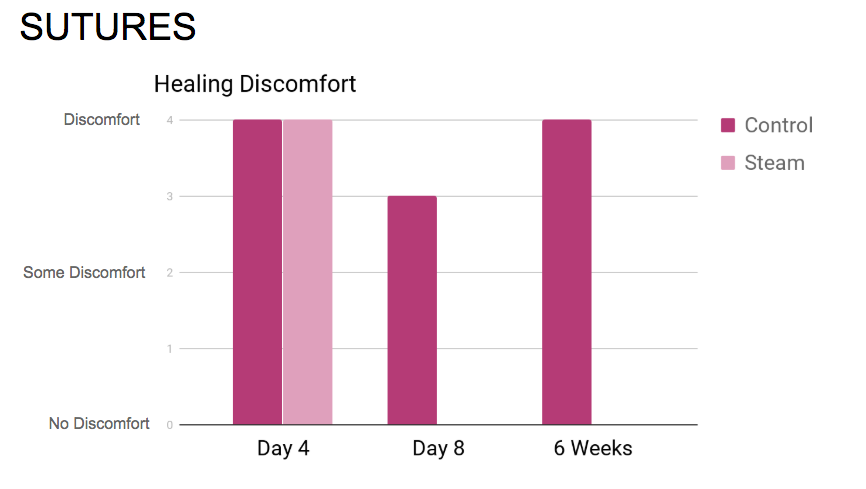 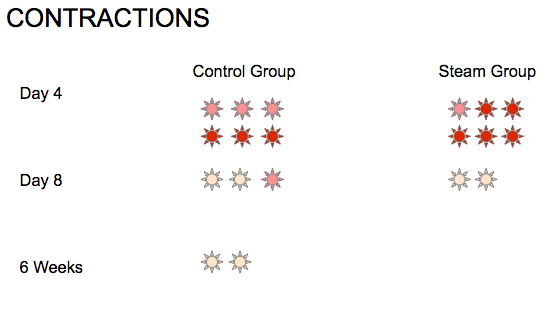 No participants had any signs of pre-eclampsia. 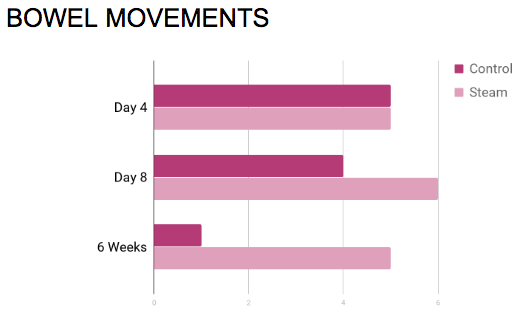 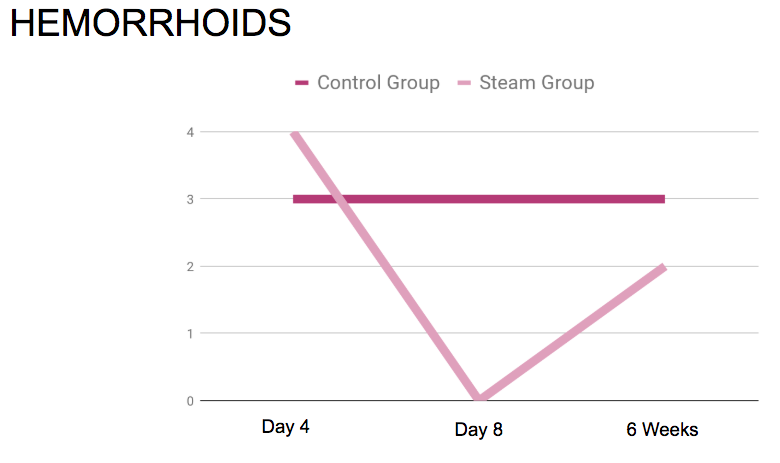 This foundational study had a number of compelling findings. The impact of steaming on blood pressure and pulse is extremely interesting and certainly warrants further study. On Day 4 the blood pressure average and pulse average for both groups was nearly the same but after 5 days of steaming the variable group showed a marked drop in both indicators while remaining within a healthy range. The control group had the opposite trend, showing a marked increase in both indicators. After steaming stopped both groups arrived at exactly the same blood pressure. The implications for steaming in the prevention of postpartum preeclampsia - a dangerous condition related to high blood pressure - are promising. Further exploration of the effects of vaginal steaming on the prevention and treatment of preeclampsia, comprised of participants who are at high risk with additional steam sessions over the 6-week time period, is highly recommended.

The change in fundal measurements after 5 consecutive days of 15 minute vaginal steams was drastically smaller in comparison to the control group. Whereas ultimately both groups’ fundi returned below the pubic bone at the 6 week mark, vaginal steaming had a positive impact on the speed by which the uterus is restored. Further study is recommended with a larger and/or representative sample. Additional steam sessions and exams between 8 days and 6 weeks are also recommended for future studies for further insight into how quickly the uterus is restored.

The study had compelling findings on weight loss and waist size reduction. Whereas the control group lost a total of 5 pounds and 2 inches, the steam group lost 7 pounds and 3 inches, indicating both a greater and a quicker decrease in both categories. Specifically, the changes from Day 4 to Day 8 are interesting. With waist girth, for example, the control group averaged a 1 inch gain in girth by Day 8 whereas the steam group had the opposite trend, losing an average of 2 inches in that same time period. Once steaming ceased, the pace of loss from the steam group slowed to match the control group’s rate of loss. The findings indicate that vaginal steaming not only resulted in a greater decrease in weight and waist size but it also initiated the process sooner and expedited the rate of loss. Further study with representative samples and additional steam sessions should be conducted to verify these findings and explore if additional steaming would have more pronounced results.

The study found drastically different results for the steam group on healing the labia. Both groups began on Day 4 with fairly consistent issues with swelling and gapping, but by Day 8 a full two thirds of the steam group had fully healed labias while the entire control group was still experiencing swelling and/or gapping.

The color characterization of lochia provided another compelling finding: at the start of the study, both groups had nearly identical lochia (rubra stage 1). After 5 consecutive days of steaming, the entire variable group had progressed to the serosa lochia stage 2 while nearly half of the control group remained in the rubra stage 1. Most compelling is that with no additional steaming, the variable group had no lochia at all except for 1 participant in the alba stage 3, while the control group saw all participants but 1 still dealing with alba stage 3 lochia. Further study with representative samples and additional steam sessions are recommended; future studies should consider daily monitoring to determine the total number of days it takes to fully expel lochia.

The group was surprised to find that participants nearly universally experienced tearing. Of those who experienced it, 9 required sutures. After steaming, the variable group had no reports of discomfort from Day 8 through the six week mark. The control group, however, reported pulling, itchiness or tenderness for the duration of the study.

The final findings that the study would like to highlight involves bowel movements and hemorrhoids. Participants in both groups began the study with relatively regular bowel movements. After steaming, the variable group improved its regularity score while the control group reported increased constipation. At the six week mark, the steam group continued to have regular bowel movements while the control group reported nearly everyone was constipated. The control group’s reports of hemorrhoids shows no change from Day 4 to Day 8 to six weeks. The steam group’s hemorrhoids drop from 4 on Day 4 to 0 after 5 days of steaming. Then, with no more steaming until the six week mark, 2 hemorrhoids returned.

Upon analysis of the findings of this study, we conclude that vaginal steaming has a positive impact on many of the indicators of postpartum recovery, particularly in the areas of lowering blood pressure and pulse, uterine restoration, initiating and expediting waist girth and weight loss, labia healing, the quicker cessation of uterine bleeding through drawing out lochia, alleviating suture discomfort, promoting bowel regularity and hemorrhoid reduction. It is possible that steaming positively impacts other postpartum indicators such as breast milk supply, preeclampsia prevention or treatment, incontinence prevention and promotion of urination but further studies are recommended for more conclusive findings.