No double rostering players OR ‘player passing’ or ‘club passing’ in the tournament:        3

STAFF MEMBERS ON BENCHES DURING GAMES

No double rostering players OR ‘player passing’ or ‘club passing’ in the tournament:

Participation in the Tournament is open to accepted teams meeting the roster and age limit of the specified division. Players must have been born during, or after the divisional year. Each team must be registered with a National State Association affiliated with USSF, USYSA, US CLUB, SAY, and AYSO.

Teams participating in the Tournament may have the following number of guest players (teams must have their states or league approval for guest players - does not apply to US Club teams):

All teams with guest players must abide by State Association rules and submit appropriate paperwork for guest players.

Teams outside the jurisdiction of the Alabama Soccer Association must have travel permits. U.S. Club Soccer teams are not required to obtain a travel permit.

One Medical Release form for each player on the form provided by your state association or league must be completed and signed by the parent/guardian and, if applicable, notarized.

All the above listed documents are required for team registration and Online Check-In.

LAWS OF THE GAME

The Tourn. will follow USYS/FIFA Laws of the Game, except as expressly modified in these Rules.

DURATION AND FORMAT OF GAMES

The duration of tournament games shall be in accordance with the following table. There will be no over-time periods played at any time. Kicks from the Penalty Mark per FIFA Rules will determine winners in tie breaks, semi-final matches, wildcard games, and finals.

New in 2022, the Build-Out line for all 7v7 matches will be the midfield line.  Please see the diagram. 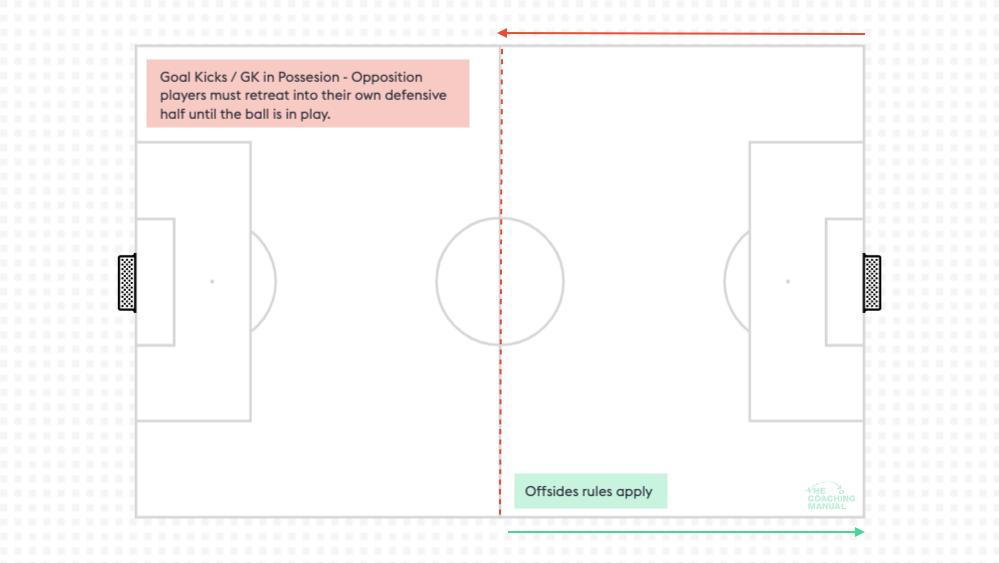 Division champions may be determined by points or by a final at the discretion of the Tournament.

1st and 2nd place teams in divisions will receive medals.

In accordance with FIFA, teams will wear uniforms and each player will have a unique number on his/her jersey.

Substitutions shall be unlimited and may be made with the referee’s consent at the following times:

Division winners will be determined by the point system indicated. At the end of the preliminary round, the division winner shall be the team with the most points in their division. Division winners advance directly to the Finals. In some cases, semi-final and/or wild card games may be required. Each team will be awarded points as follows:

Preliminary games decided by penalty kicks (e.g. for inclement weather) will be scored as 1-0 for points determination.

In the event of a tie within a division, the following criteria shall be used to determine the winner:

Kicks from the Mark

If a three-way tie occurs, use Procedures 1-5 until one team emerges as the winner or one team is eliminated, whichever occurs first. In the latter instance, start again with Procedure 1 for the remaining two teams. If all three teams remain tied after Procedure 4 go to Procedure 5.

Use a coin toss to determine the first two opponents.

A player or coach ejected from a match will be barred from further participation in that match and the next succeeding match for that team. For coaches with multiple team’s ejections are only for the team playing at the time of the ejection.

In the case of a red card, the coach or team official is to give the pass of the offender to the referee at the game. Referees will give the card to tournament officials and an official team representative may pick up the pass after the team’s next game. If a red card occurs in the last match for the team, teams must give the card during the game to the referee and can reacquire the pass after the match. Reports will be filed with the home state association.