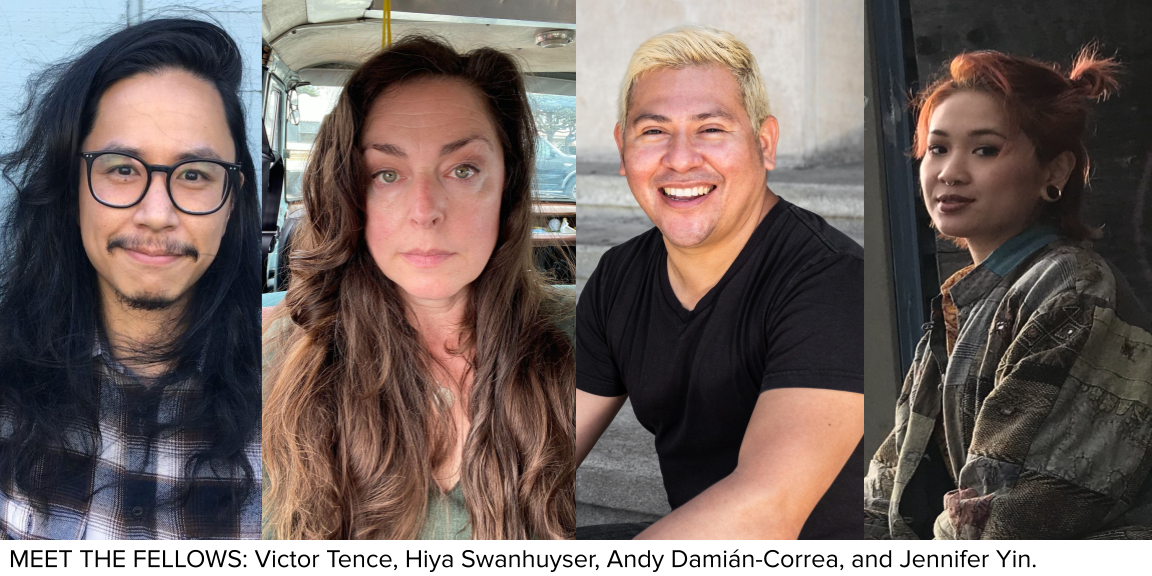 City College Journalism is proud to announce the four students who will participate in California Humanities’s Democracy and Informed Citizen Emerging Journalist Fellowship. Together they will spend the Spring 2021 semester doing in-depth reporting about the ways in which different sectors were impacted by the pandemic with an eye toward how each will recover.

Victor Tence is a City College of San Francisco journalism student practicing in both radio and print. He served as an editor, reporter and photojournalist for the college’s award-winning Etc. Magazine and bi-weekly newspaper, The Guardsman.

He has interned at Bay News Rising and the San Francisco Examiner, and recently completed a broadcast journalism fellowship at public radio station KALW, where he continues to produce for the show Crosscurrents.

He spent seven years working as a cook in San Francisco. He worked his way through a variety of notable kitchens in the city, holding positions from prep cook to sous chef.

His time working in back-of-the-house jobs allowed him to experience the Bay Area through the lens of working class families. Inspired by their work ethic and solidarity, he turned to feature and news writing as a way to advocate for and document their struggles. His stories have focused on labor issues that exist for all the hands that work in each step to bring food to our groceries shelves and restaurant tables.

This semester he will be finishing his time in City College of San Francisco with an Associates of Arts in Journalism. Find Tence on Twitter, Facebook and Instagram.

Hiya Swanhuyser is a working journalist and a City College of San Francisco journalism student.

She has worked as an arts writer, publishing in SF Weekly, 7x7, the Believer, KQED, Fandor, and elsewhere, focusing on live, local, original, and independent art of all kinds. She’s also more recently a reporter on local government, and her news writing has appeared on Mission Local where she was an intern, in the North Bay Bohemian and Pacific Sun alt-weeklies, and in the Castro Courier.

Most recently, her feature about composer and music educator Marcus Shelby’s role as a voice actor in Disney/Pixar’s animated film Soul appeared simultaneously on the covers of the North Bay Bohemian, Pacific Sun, and East Bay Express newspapers. Hiya was born in San Francisco and raised by hippies on a family farm in a single-wide mobile home in a second-growth Coastal Redwood forest in Northern California. She is obsessed with drinking fountains. Find Swanhuyser on Twitter, Instagram and online at hiyaswanhuyser.wordpress.com.

Andy Damián-Correa is a journalism student at City College of San Francisco where he focuses on covering Latinx community.

Damián-Correa began his career in hotel and restaurant management, he moved into journalism to create awareness of the challenges faced by the Latinx community.

Damián-Correa served as reporter and editor for the college’s award-winning Etc. Magazine and The Guardsman. He does freelance work in radio and television for Telemundo and Univision as well as executive producing Anchor’s Podcast, a weekly online Spanish language publication.

Damián-Correa was recently honored for his column writing by the Journalism Association of Community Colleges Northern California division.

In the Fall of 2021, Damián-Correa will transfer to San Francisco State University where he will study journalism.

Currently he is working with the Student Press Freedom in Washington, D.C. in op-eds to raise awareness about Journalism Against the Odds. Find Damián-Correa on Twitter, Spotify, Instagram, Facebook and online at andydamiancorrea.com.

Jennifer Yin is a student at City College of San Francisco where she focuses on international journalism.

Yin is passionate about exploring her Cambodian heritage in the pursuit of documenting the lives of refugees, who survived the Khmer Rouge. Building community and advocating for social justice are two main factors of why she pursued the journalism field.

She served as the co-editor-in-chief and culture editor at the college’s award-winning bi-weekly newspaper The Guardsman. In addition, she illustrated the Spring 2020 cover of Etc. Magazine.

She has won awards for her photojournalism, illustration, and long-form reporting from the Journalism Association Community Colleges.

In the Fall 2021 semester, Yin will complete her Associate of Arts for Transfer in Journalism. She intends to transfer to San Jose State University to pursue a degree in journalism and a minor in international relations. Find Yin on Instagram, Facebook, Twitter and LinkedIn.

Democracy and the Informed Citizen is a statewide initiative from California Humanities designed to engage a broad cross-section of young Californians in consideration of the vital connections between democracy and journalism. Presented in partnership with California community colleges, the initiative provides fellowships, training and mentorship for emerging student journalists, and opportunities for campuses and the public to engage in dialogue about the role of journalism in their communities and beyond.

The City College of San Francisco Journalism Department’s mission is to provide students with the opportunity to study the field and the various skills that go into a career in Journalism. Our faculty are journalism professionals with real-world experience as journalists, editors, and researchers who bring their expertise to the classroom. Learn more about our student-run publications, degrees, and certificates at ccsf.edu/journalism.