Ahead of the one so-called ‘community meeting’ about the Cop Academy in October of 2017, the project lead David Reynolds says the purpose of the meeting is not to discuss whether there should be a cop academy, and mentions that protestors will likely be present.  In his words: "I also plan to be clear that whether or not there should be an academy is not the point of the meeting" . . . "I don't expect answering a lot of their questions unless they are strictly factual."  Clearly, they wanted no community input whatsoever.

These documents prove Mayor Emanuel made the decision to build this cop academy and that City officials were going to make it happen no matter what.   Ironically, his insistence on the July 3rd press conference announcing the Cop Academy really helped us make the argument that these docs are not privileged.

The full documents are viewable here.

Some screenshots of significance are below.

Discussions of CPD use of additional closed CPS schools for police “scenario based” training (Page 6): 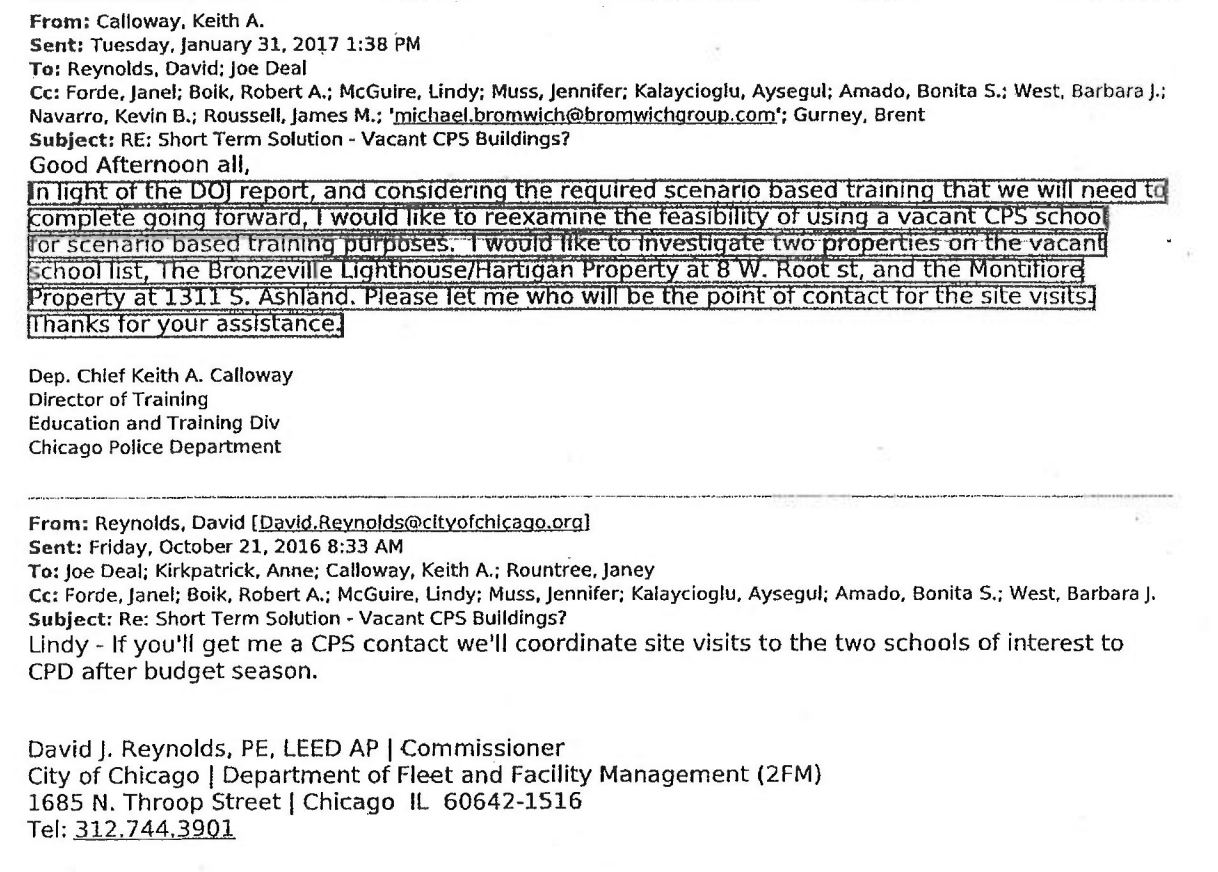 Misled public about funding sources.  The statement that the new cop academy would be funded by sales of the previous ones was reiterated in multiple media outlets, despite knowledge that would be improbable as revealed below. (Page 16):

Fran Spielman of the Chicago Sun Times got a 3 day lead on the story (Page 25):

37th Ward Alderman Emma Mitts “approved her quote” in the press release demonstrating support and enthusiasm for the project, before even a charade of public input was offered to her residents or she had been fully briefed on the project (which took place in July of 2017) (Page 29):

No funding plan in place at the time it was announced. There’s always money for policing, never for communities (Page 38): 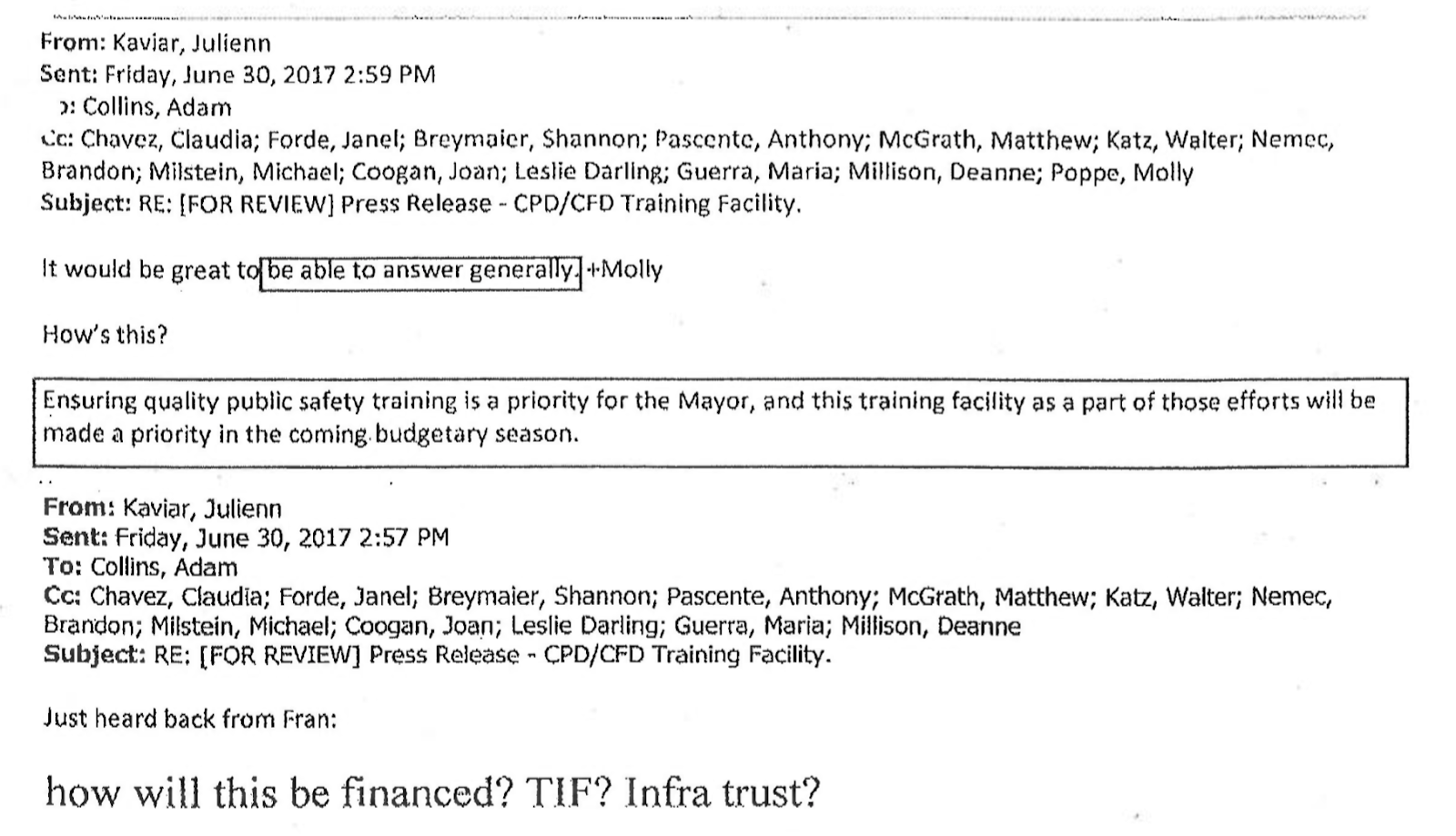 The Mayor’s Office instructed the team to “be vague” about funding (Page 37): 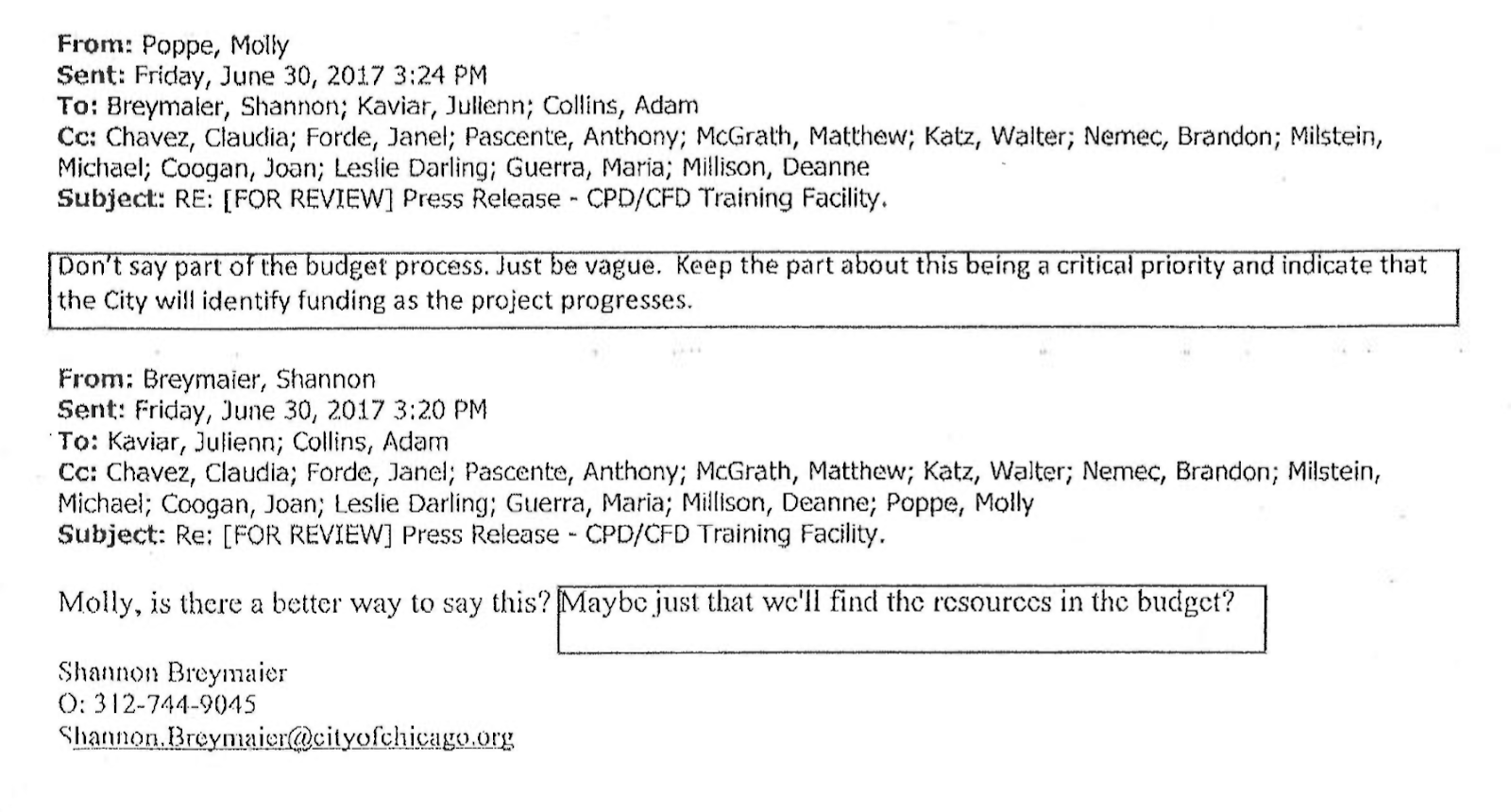 David Reynolds - the Former Vice President of AECOM, the company later granted the design/build contract for the cop academy - continually insisted that no detailed funding plan be provided until the contract was awarded (Page 58):

He reiterates, “I want to be crystal clear we aren’t going to have any more clarity on how the $60 gap will be financed…” (on Page 83): 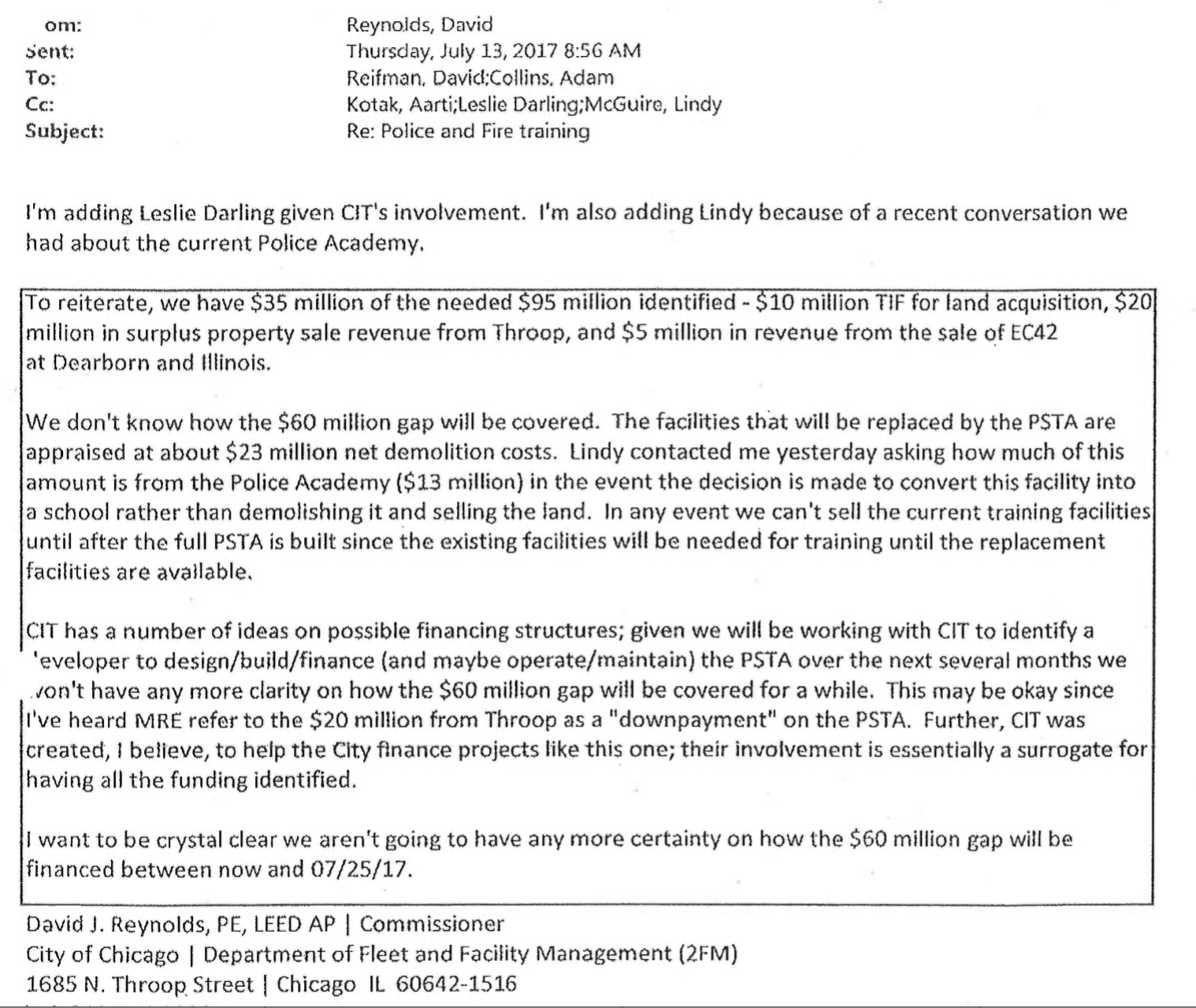 He provides multiple assurances that the Chicago Infrastructure Trust will come up with a financing option, and that it will depend on the company selected and their proposals: 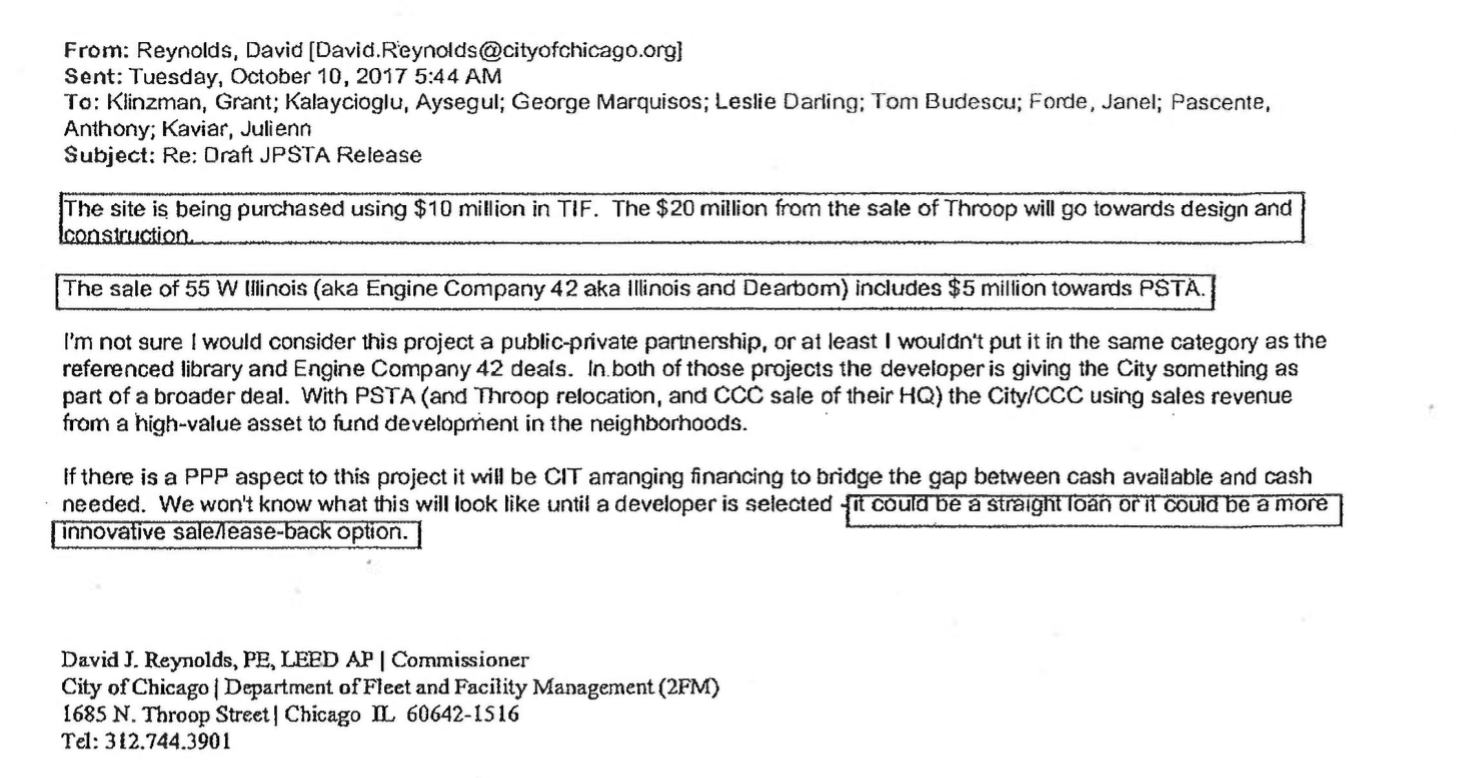 Ultimately, the city funded the $60 million gap, in order to provide payment to AECOM up front, through a bond that once paid out, will actually cost the city in the range of $200 million with interest.

According to the updated timeline provided by the Chicago Infrastructure Trust, construction should have been completed by March 2020.  Construction has not begun yet.  (Page 108):

Despite never following through on the City’s commitment to build a Chicago Torture Justice Memorial, to honor those who suffered torture under CPD Commander Jon Burge and his men, the new cop academy would feature a Museum displaying artifacts representing the history of CPD (Page 113):

There were no meaningful opportunities for community input, much less a chance for residents to decide whether or not they wanted the facility - even at the ‘community meetings’ regarding the cop academy (Page 169): 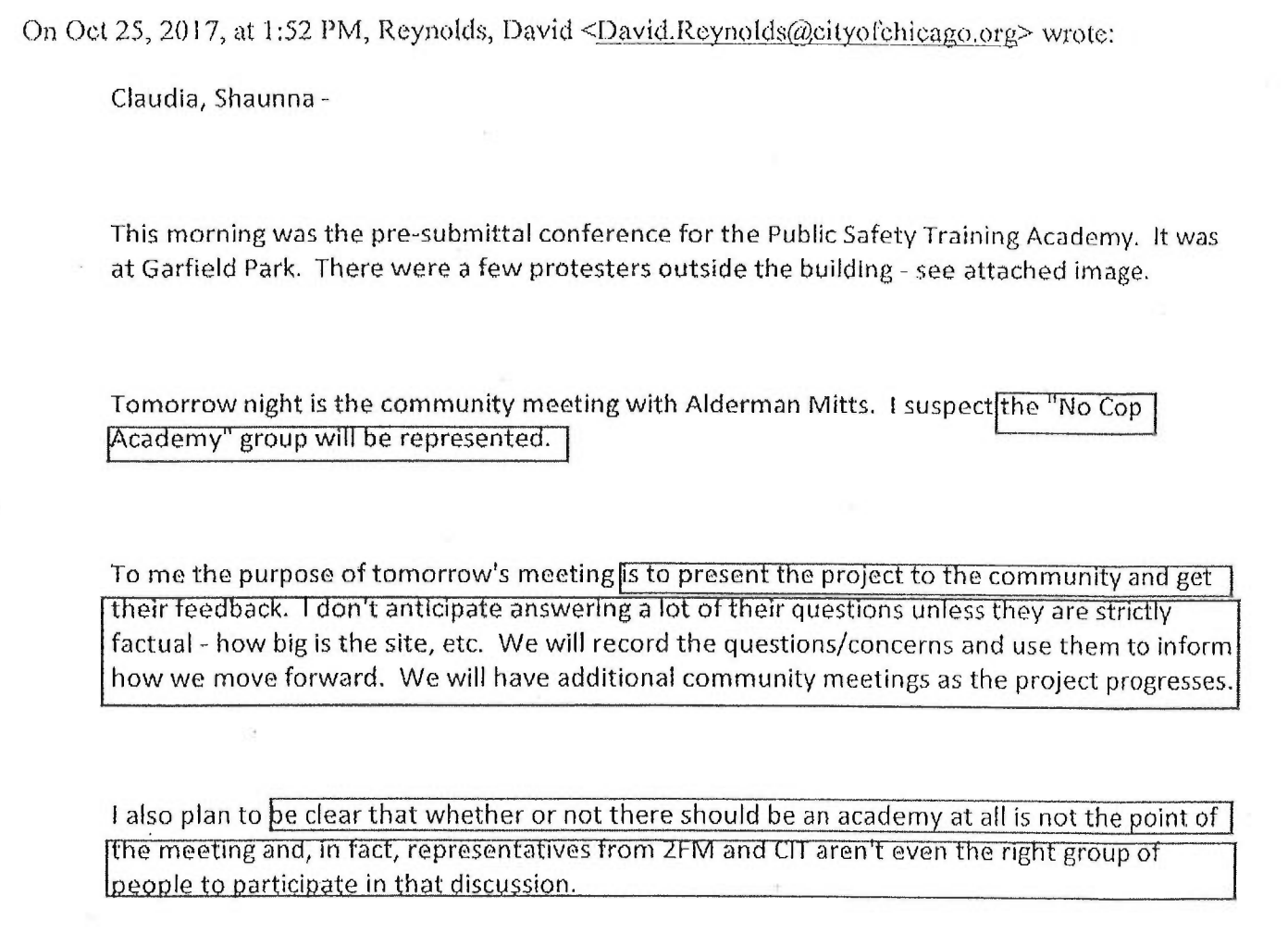