5 Steps to Passing a School Board Climate Action Resolution 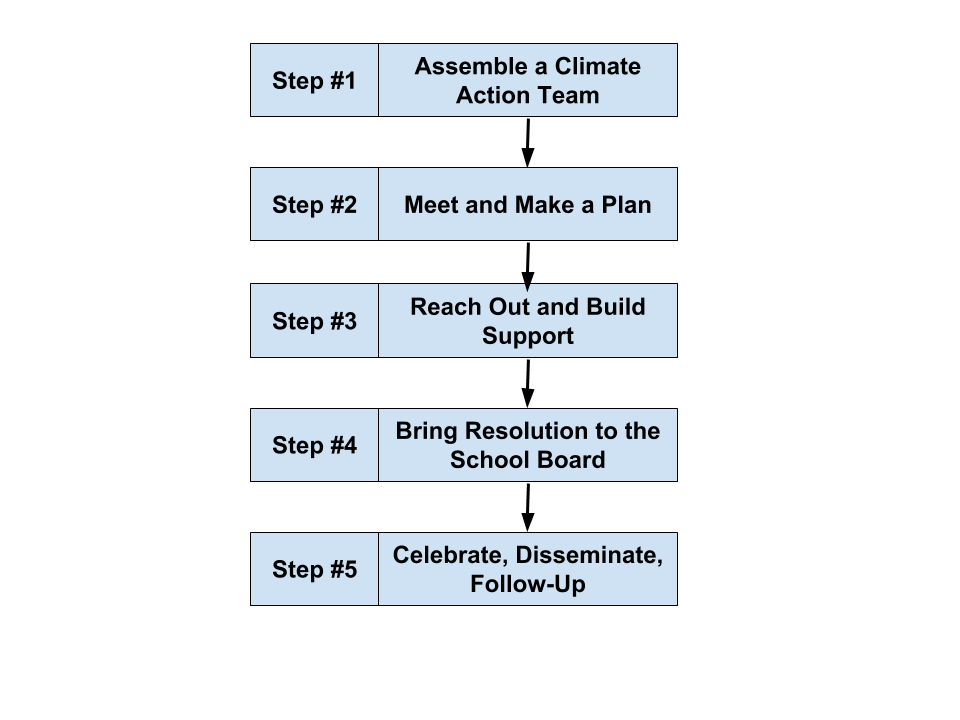 Start with a team. It does not have to be a big team----3 to 8 people should do. Ideally, your team will have a mix of the following stakeholders:

Other thoughts on making a Climate Action Team:

I want to join a nationwide effort to build public will to act on climate. I just learned about a group helping to set up volunteer, grassroots Climate Action Teams to work with their local school districts to pass Climate Action resolutions. Anyone interested in joining me? Here are some documents and a petition you can sign to get more information.

(1) the Schools for Climate Action petition

Meet and Make a Plan

Once you have assembled your climate action team, have an initial 1.5 to 2 hour meeting to make a plan.

Here is a possible agenda:

Take pictures! Imagine if this instruction manual had a series of pictures showing us in action! If keep on forgetting to photodocument meetings. Establish this norm early on. It will help maximize your ability to build public will.

Even before your first meeting, encourage team members to start learning about carbon pricing and climate advocacy strategies with these resources:

However, you do not want team members to be scared off with too much homework! There is an overwhelming amount of information about carbon pricing and climate advocacy. It is not so important to read it all, but rather to build in research and learning into your individual and team cycle.

Reach Out and Build Support

Bring Resolution to the School Board

[1] I put political in quotes because this is an organizing effort so in many ways it is political. However, the politicization of climate change has been a major cause of our society’s inaction on it. We should avoid associating climate change with the idea of politics as much as possible. Climate change is primarily is a socio-ecological phenomenon with significant human rights, health, economic, educational, political, and moral implications.