Battle of the Nations 2021
Updated automatically every 5 minutes 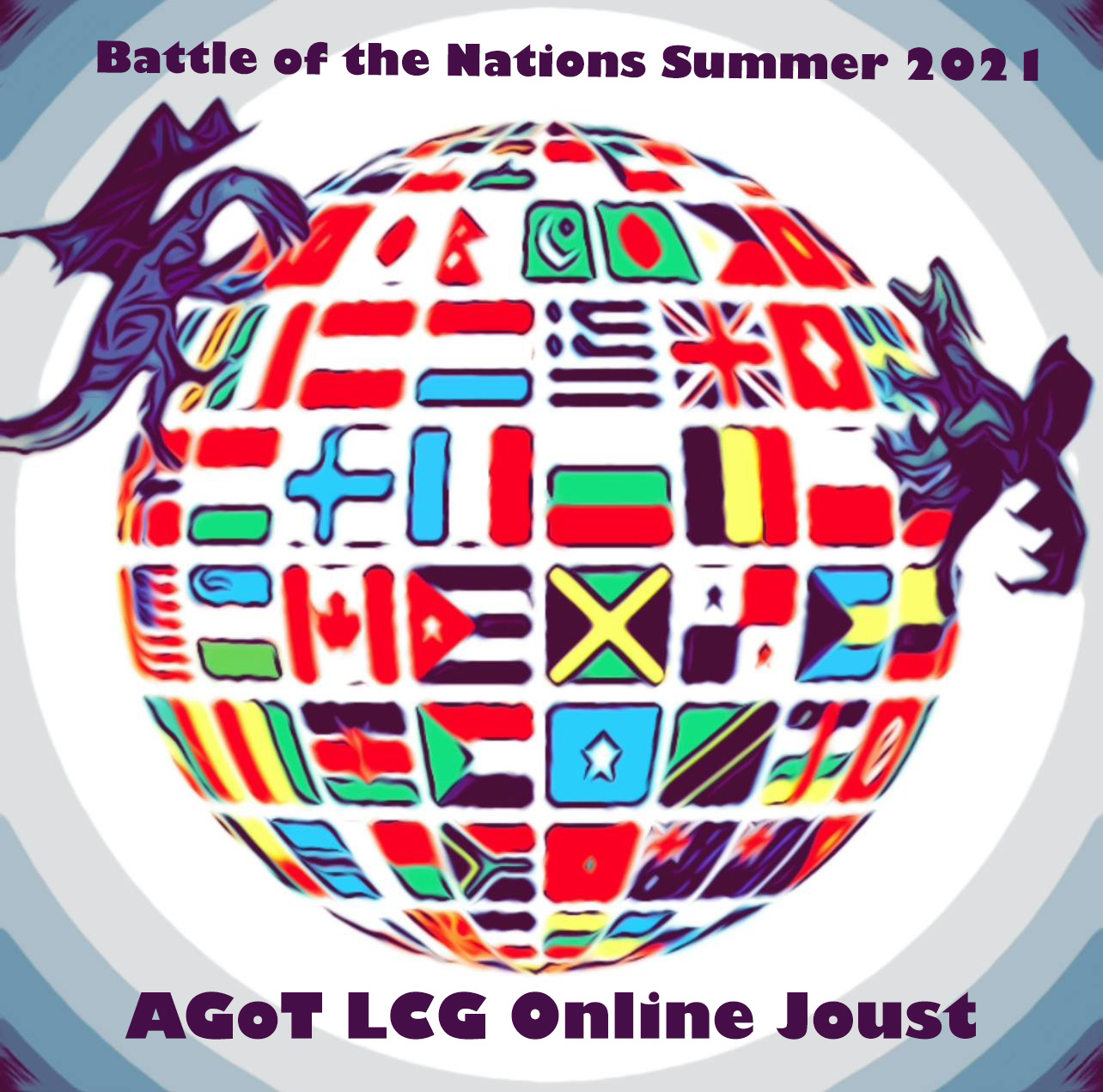 Battle of the Nations is an online tournament, where teams of players representing their nations are competing against each other in weekly rounds of 7v7 matches.

This tournament will be held on https://theironthrone.net.

The card pool consists of the original cards + Redesigns + Forgotten Heroes + Jade Sea + Hear My Words[1].
The Redesigns FAQ v2.2 Restricted List applies, with the addition of “The Iron Throne (LMHR)” to the list of banned cards.

Each team will build and submit eight decks, one for each faction in the game, which they will play throughout the tournament. Each agenda may only be used once per team.

Teams will be competing against each other in weekly rounds of 7 vs. 7 joust matches, best-of-seven wins the round. This is a Swiss-system tournament with a cut to single elimination rounds if attendance supports it.

Teams are meant to represent the nation or country of the players in a respective meta. There can be only one team per nation, we leave it up to the metas to decide who will represent a  country.

Teams can be as big or little as they want, there is no lower- or upper-limit on how many players can be on a team. However, please keep in mind that all teams will have to play 7 games per week, regardless of player count.

Each team must be headed by a captain. The team captain’s role is to serve as the primary point of contact for their team, it is the captain’s responsibility to match their decks to drivers and pair the matches in each round.

Acknowledging the fact that many metas may not be able to field adequately sized teams by themselves, we decided to allow for multi-national teams. Furthermore, nations and countries do not have to be officially recognized in order to form teams and to participate.
These concessions were made to allow as many players as possible to participate, please do not attempt to abuse them. The organizers reserve the right to reject any entries at their discretion.

To submit a team into the tournament, the team’s captain must contact one of the three organizers (see Contact section below). A team submission must include the name of the nation/country that the team is representing, along with the Discord handles, TheIronThrone.net usernames and Jousting Pavilion names of each player of the team. Submitted teams can be seen here: Battle of the Nations 2021 (Teams).

Addendum (June 11th):
To clarify - it is OK for national teams to include foreign nationals. However, teams should still be representative of their nation, so a majority of players on that team should still be from that country.

Once formed, the chosen captain must announce their team in the tournament discord. This announcement should include what nation/nations the team is representing, and who the captain and the players are.

Players can be added or removed from the roster until the Team submission deadline ends on Monday, July 5th 7th at 11pm GMT. (Edit: July 3rd)

Each round, paired teams will be facing off against each other. A team will have to play seven matches per round. Matches are standard 55 minutes 70 minutes (Edit: July 1st) length. A round lasts one week, starting on a Monday and ending on a Sunday. New round pairings will be announced each Monday by 9am GMT.

At the beginning of each round, the captains of the teams that are paired up against each other will line up the seven matches for this round.
Captains will first determine who gets first pick. The decision who gets to pick first is determined at random, via a coin flip or a dice roll or the likes. Whoever wins the coin toss decides whether they want to pick the first pairing, or the second and third.

After the first team’s captain chooses a first pairing, the second team’s captain will decide pairings two and three. After that, captains will pick the remaining pairings in alternating order, starting with the team that had first pick.

Match-making will have to complete within 48 hours after round pairings have been announced.

Deck/driver assignment and individual match scheduling happens at the discretion of each team captain, but must be communicated clearly and in a timely manner to the opposing team.

Match results must be reported in the appropriate channel of the tournament Discord. The deadline for reporting results is Monday at 7am GMT.

Each team will have to build and submit 8 lists, one for each faction in the game. Agendas may only be used once per team. The Free Folk agenda is allowed.

Due to the open-decklist nature of the tournament the card The Iron Throne (LmhR) is considered banned.

Once decks have been submitted, they are locked in for the duration of the Swiss-rounds part of the tournament.

Teams that make the cut will have the opportunity to modify their decks before the first elimination round, that includes the option to swap out agendas.

The tournament organizers would like to give a shoutout to Aneil and Atanas, their “World Cup” and “By Three They Come” tournaments served as an inspiration for this event.

[1] Hear My Words is currently under active development, but close to completion at this time of writing. After consulting with the Design Team, the organizers have enough confidence that this pack will be released with enough time prior to the start of the event in order to make it tournament-legal.