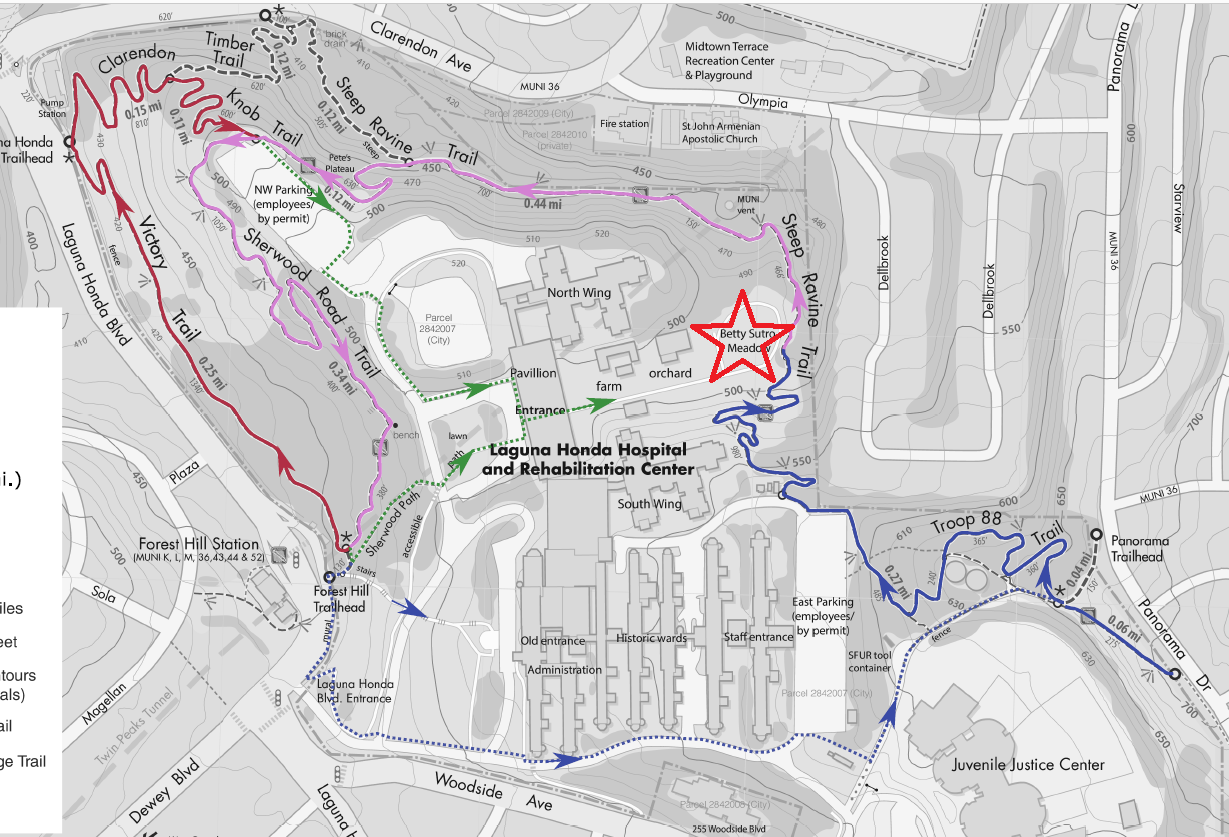 This meadow was created when the hospital was rebuilt around 2005. And it’s the site of today’s party! Find the connection to the trail system on the edge of the meadow furthest from the hospital buildings.

Turn left (downhill) to start down the Steep Ravine trail.

This first segment is a reroute of this historic route of the Steep Ravine trail. It was the very first project done as part of the CCG funding, in early 2017. Previously there was a route up the bottom of the valley, which was unsustainable in several ways. Note that the trail has a generally gentle grade and also several grade reversals. That is, the trail will momentarily go uphill as you’re going down. This channels water off the trail to limit erosion.

Once you go around the corner and the trail levels out, notice the structure to the right. What do you think it is? Listen for a moment.

This is the vent for the Twin Peaks Tunnel, built in 1916 or so. It is approximately the half way point of the tunnel.

From here continue along the trail. This largely flat section of trail has been here for a long time. It passes, shall we say, a variety of features. We remove a dilapidated fence from the trail. In some areas we have done some habitat work to encourage California native plants, and we plan to do more in the future.

Note the ravine to the right. There is sometimes water present, one of the few places with surface water in the city.

As the trail makes some curves, look off to the right. This looks almost like a lake… A lake of blackberries. They are more than 10 feet tall in places, and when first identifying the route of the old trail they covered it. At the far point of the ‘lake’ you may notice a brick structure. This is a drain into the city’s combined sewer system. The drain is the reason why we discovered this system in the first place, as one of our committee members works on Sewer projects.

Notice some old steps along the way just before arriving at an intersection. Bear left at the intersection to climb the Clarendon Knob trail.

This section is one which was re-routed this year (2019) with funding voted on by the D7 Participatory Budgeting program. The reroute replaces two very steep sections—one which is open down to the drain and then Clarendon avenue. Another even steeper one which climbed directly up to what is now the parking lot. Evidence of the latter can be found if you know where to look. The new trail is machine-cut at a sustainable grade. Notice that it runs through dense blackberry, which decomposed to a significant depth. It was quite a challenge to identify the route through, clear it at an appropriate time of year, and build the trail. This section is the one which most benefited from machine building. It was cut at the end of the rainy season and once the next rainy season begins, we’ll make some tweaks to it.

Note the various vegetation along the section—the nightshade is a typical successor of the blackberry.

The trail climbs to the parking lot. If you drove you may have parked your car here. If you need to return to the meadow, you can follow the concrete sidewalk back to the main hospital entrance.

At the trail intersection, go left (slightly uphill) onto the Sherwood Road Trail, also funded by the D7 Participatory Budgeting program. The trail goes past the edge of the parking lot then down the hill along the top of a grassy area. The hillside offers a view into the Forest Hill neighborhood.

This grassy area was the site of a Victory Garden during the 1940’s. Today it is a mix largely exotic plants with some native California ones mixed in. We hope to add to the native plant ratio in the meadow in the future.

The trail continues along a path, dipping downhill then back up through a grove of saplings. The shrubs and trees are entering the meadow. The trail climbs a bit to a flat and wide segment.  This is the old “Sherwood Road”, which gives the trail its name as it passes through “Sherwood Forest”. You can see various generations of history through here.  It is a mixed woodland.  Buried in there is the Lost Trail, which we would like to work on in the future.

Eventually you will reach one of our four Trail Kiosks. Here you’ll find a map and information about the Laguna Honda Community Trail System.  Exit the trail system on the short connector opposite the kiosk.

To visit the Mural created by Precita Eyes, go down to the street and look. Well worth it! You can see scenes ranging from prehistoric flora and fauna (on the left) up to the Trail project (towards the right).

If you would like to head to Muni, the Forest Hill Station is across the street.

If you would like to head back to the meadow, return up the steps follow the broken concrete path uphill to the left back to the hospital main entrance.

For more trails, you can take a shorter option or a longer option.

The shorter option is to return to the kiosk and the trail. Continue down the trail, turning right at every intersection. You'll pass through more of the woodlands, the lower part of the meadow on the Victory Trail, then back up the hill on the Clarendon Knob trail to the NW parking Lot. Follow the sidewalk from there back to the party. All of these segments were opened in the last year.

If you would like to reach the very top of the trail system for a longer tour, we’ll take a shortcut route through the hospital grounds.

Follow the Blue flags for this route. We'll start on the hospital roads to connect with the other end of the trail system.

Head along the mural to the far uphill end, and enter the accessible path to the hospital.

Near the stop sign, exit the path on a dirt trail and cross the street to a sidewalk. You are now next to a native plant garden maintained by the hospital's gardening staff. Continue up the sidewalk to and along on the right side of the old hospital buildings.

At the highest building, bear left towards the East parking lot, then immediately right up a connection to a gravel road. Turn left and follow the dirt road to a colorfully painted container.

This is the SF Urban Riders storage container, and the meeting point for our regular second Saturday workdays. The container was painted by by Girl Scout Troop 62221 in 2018 and updated this year.

Continue up the gravel road along the fence. When you reach the next trail kiosk, continue to the right along the fence to the very top of the property. (Note: On a foggy day, you may want to simply turn left at the kiosk onto the singletrack trail.)

From here you have a great view of the Pacific Ocean, Mt Davidson, and even a view to the South. The Crosstown Trail heads towards Glen Park from here, and there are several ways to connect to Twin Peaks and the Bay Area Ridge Trail.

Turn around and head back down the hill to the kiosk. Continue straight at the kiosk onto a singletrack trail.

This is the Troop 88 Trail. Much of it was built in mid-2017 by BSA Troop 88 along with SF Urban Riders. It contours through this section of woods, which are very regularly used by the neighbors.  Note that it will curve left, then right, then straight, then right at intersections; follow the route clearly taken by many bicyclists.  You will end up at the edge of the East parking lot.

This is the top of the Steep Ravine Trail. It is the second segment of trail we worked on with CCG funding late in 2017. It replaces an extremely steep service road, which you may notice as you cross it several times. It is the site of significant native plants where were placed in winter 2017-18; many of them are marked by green flags. See if you can identify the Yerba Buena!

Be sure and look at the views not only at the party below, but at the Sutro Tower and Mt Sutro above.

At the bottom of the hillside, cross a small dry channel and turn left to return to the meadow.