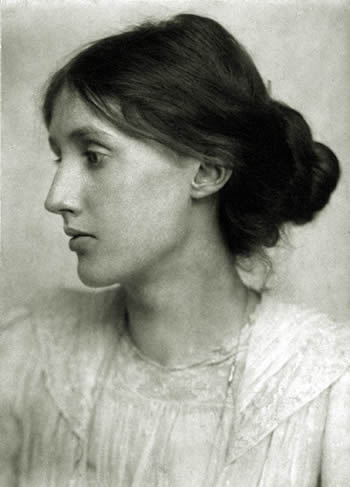 I decided to kick off Women’s Month with none other than Virginia Woolf, an influential female author famous for her modernist writing and introducing the world to the continuous flow of consciousness as a narrative literary device. Her tragic life and subsequent struggle with mental illness—nowadays, we suspect she had bipolar disorder—made her an intriguing author to showcase first.

Intrigue aside, I sometimes feel personally connected to Virginia and her words. I often get told my writing resembles her style in some ways, and I take that as the highest form of flattery. Virginia was a woman who lived by her own right and creative design. She was stoic, intelligent, and had exceptional courage to suffer the way she did and still pave the way for other female authors.

For me, one of the most painful examples of her suffering is the loss of her mother at thirteen years old, quickly followed by the death of her half-sister only two years later. These losses led her to her first real mental breakdown. Painted as it being “her madness”, she suffered through tremendous hardships and lacked the support and medical treatments needed for her condition. The death of her mother and sister weighed heavily on her heart, as she had found them pivotal influences in her life. It was after her sister Stella’s death that she first expressed her wish for death, writing in her journal “death would be shorter and less painful”. Virginia referred to the years following their deaths as “the seven unhappy years”.

This period was followed by the death of her father, who had been a fearful man in her early life but became someone she would later rebuild a relationship with. Virginia spoke of this turbulent time in her life as a “broken chrysalis”, the wings still creased. It was after her father’s death that she had the most serious collapse in her mental state, which saw her take her first attempt at suicide when she flung herself out a window. It was then she was briefly institutionalized and treated by her father’s doctor, who blamed her unconventional education and upbringing as the sole cause of her mental illness rather than the traumatic experiences of loved ones’ deaths and the suspected sexual abuse she suffered at the hands of her older half-brother. Her off and on time in institutions had her feeling trapped and stifled. She had expressed several times that the only way to escape the horror was to jump out of the window. Leonard Woolf would come to be her biggest voice and advocate that the medical world knew nothing about what his wife suffered from. They didn’t know what he did: that as long as she lived a quiet life and was not strained emotionally, mentally, and physically, she was fine, which did not fit the diagnosis of neurasthenia in his mind.

When it comes to that “unconventional” education of hers, we look back on an era where it was unheard of for women to get a formal education. Instead, her mother taught her everything from French to the language arts. Her father taught her mathematics and provided her with his immense library, in which he promoted her avid reading.

It was when she attended King’s College London that she was exposed to the women’s rights movement, and it was through her older brother that she was introduced to her future husband, Leonard Woolf, who her brother had met during his time at Trinity College Cambridge. Leonard, her brother, and a few other gentlemen ended up forming the Midnight Society, in which debates and philosophical discussion would be had regarding literature, arts, and politics. Virginia found herself in an advantageous position and one not afforded to women of the time, as she was invited to participate in open discussion.

After her marriage to Leonard Woolf, they started up Hogarth Press. As Virginia had enjoyed binding books as a hobby, this seemed like a natural step. Hogarth Press published most of her and Leonard’s works after its establishment. It also published the likes of T.S. Eliot and Laurens van der Post during its lifetime. Virginia used their press to publish works by contemporary authors and promoted the ‘outsider’s society’ through choosing to publish authors who would help break free from the patriarchal society that plagued women writers. She believed women needed a “room of their own” to develop. Virginia often fantasized about women writers creating a private space for themselves via their writings, which would help spur on a feminist critique of society as they knew it. Though she helped to promote these voices through their company, she signed over her interests when she attempted suicide for a third

Plagued by a lot of factors in life happening in 1940, she went through a steep decline. Their press and home were both destroyed during the Blitz from September to October. This set her further back in an emotional and mental decline, which culminated in her fourth and final suicide attempt. She filled her overcoat with stones and walked into the River Ouse, which was located near their home. Her suicide note left for Leonard reads:

“Dearest, I feel certain that I am going mad again. I feel we can't go through another of those terrible times. And I shan't recover this time. I begin to hear voices, and I can't concentrate. So I am doing what seems the best thing to do. You have given me the greatest possible happiness. You have been in every way all that anyone could be. I don't think two people could have been happier till this terrible disease came. I can't fight it any longer. I know that I am spoiling your life, that without me you could work. And you will, I know. You see I can't even write this properly. I can't read. What I want to say is I owe all the happiness of my life to you. You have been entirely patient with me and incredibly good. I want to say that—everybody knows it. If anybody could have saved me it would have been you. Everything has gone from me but the certainty of your goodness. I can't go on spoiling your life any longer. I don't think two people could have been happier than we have been. V”

When reading her works, you can see the correlation to her struggles with mental illness. Such examples live in A Room of One’s Own, where her rendition of Shakespeare’s sister “would certainly have gone crazed, shot herself, or ended her days in some lonely cottage outside the village, half witch, half wizard, feared and mocked at”. You can find another example in the character Septimus Warren Smith in Mrs Dalloway, who, like Virginia, was haunted by death and chose to commit suicide rather than be institionalized again. In her letter to Ethel Smyth, Virginia described her own battles as a lava of madness:

“As an experience, madness is terrific I can assure you, and not to be sniffed at; and in its lava I still find most of the things I write about. It shoots out of one everything shaped, final, not in mere driblets, as sanity does. And the six months—not three—that I lay in bed taught me a good deal about what is called oneself.”

It is hard to picture such an eloquently influential figure struggling with such issues throughout her life, though it is hard to argue against the profound effect her experiences and struggles lent to the tragic beauty that is her works and words.

I’ve personally decided to re-read her works with her own life experiences in mind. Every word she chose and every character created leads us back to her own battle and gives us a glimpse into not only her life but her psyche.