The purpose of this document is to define the general release cycle for the NWB and HDMF software and schema.

Patch releases to software and schema may occur at any time.

This release pattern allows for resolution of dependencies between the different software packages.

Major releases of software (PyNWB, MatNWB, HDMF) generally occur once per year and follow a similar release pattern as minor releases with the addition of RC (release candidate) releases of NWB Schema, PyNWB, and MatNWB two to four weeks prior to the major release to support public testing.

This document describes the general release cycle, but the specific implementation will depend on current needs. For example, a major software release may be necessary more frequently than once per year in order to fix critical bugs or release major new features, but an RC release will still precede the major release. Substantial deviations from the general release cycle will be announced on the NWB social media channels.

Patch schema releases make minor bug fixes. Patch releases are not scheduled and are made as needed.

Patch software releases make backwards compatible bug fixes. Patch releases are not scheduled and are made as needed.

The figure below illustrates the general release cycle for NWB consisting of up to 3 minor and 1 major release(s) each year. 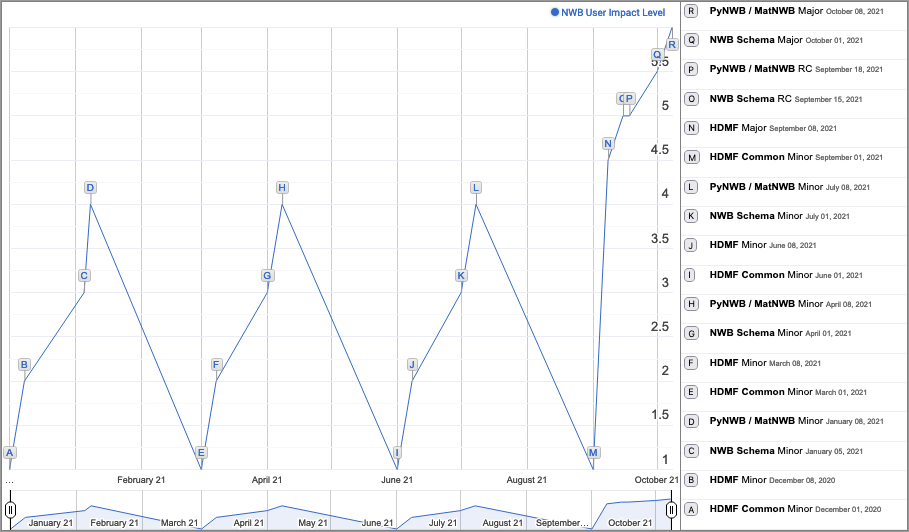 The vertical axis of the chart illustrates the impact of releases on users. Since PyNWB and MatNWB pin versions of NWB schema and HDMF Common schema, minor releases of HDMF and HDMF Common schema generally have low direct impact on users but impact primarily developers using the development versions of NWB software. Minor releases of the NWB schema, PyNWB, and MatNWB usually have medium impact on users and developers in that they should usually not require major changes in user/application codes but may expose relevant new features or fix important bugs. Major releases of the software then may expose changed or new behaviors that may require significant changes to user and application codes, and as such can have high user impact.