The purpose of this document is to define the process by which extensions to the NWB core standard are proposed, evaluated, reviewed, and accepted. The goal is to facilitate community engagement while ensuring quality and utility of the NWB data format.

Data standards are not static but evolve to adapt to changing requirements, clarify ambiguities, and fix bugs among others. The typical life-cycle of format extensions is outlined below. 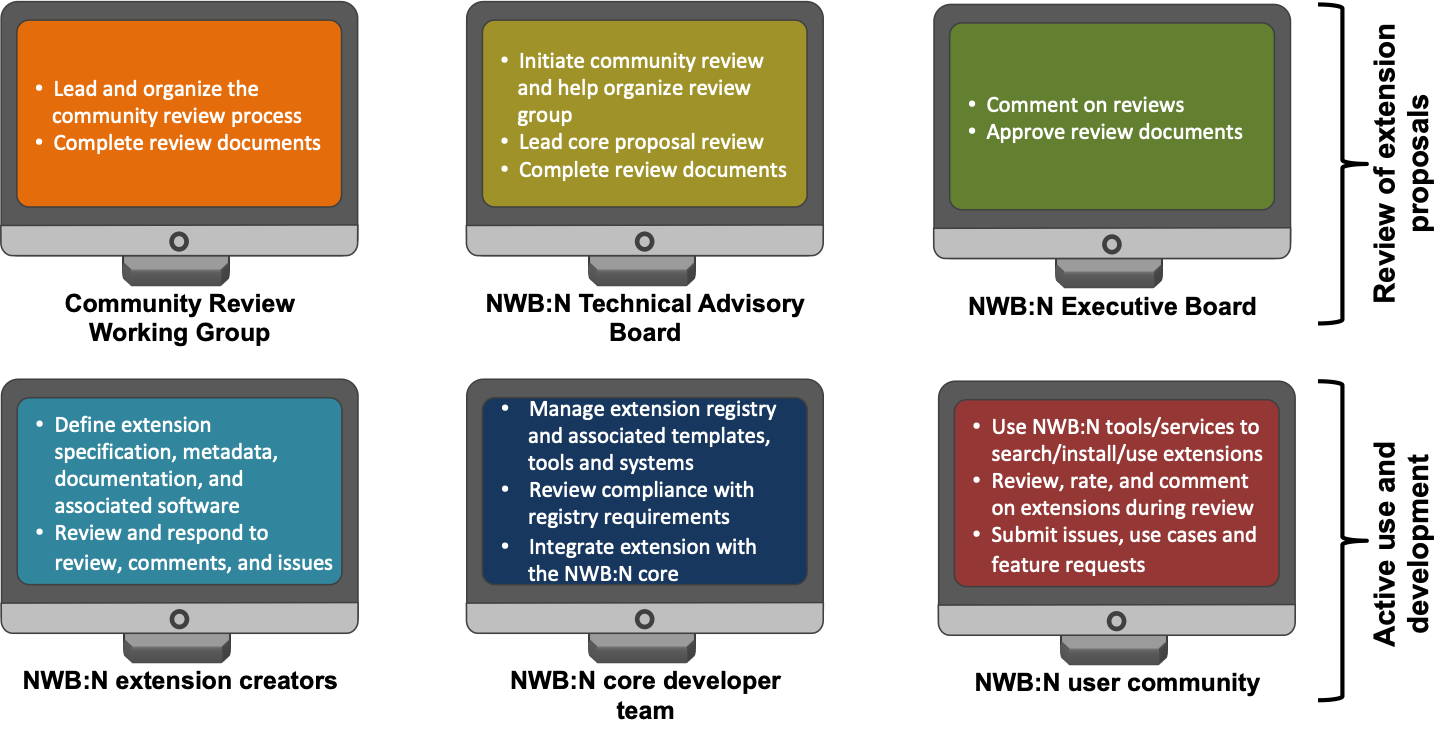 Phases of the review of extensions

To guide and clearly communicate progress in the review and acceptance process, we use a multi-phased process for acceptance. As “Lab Extensions” have not entered the review process yet, they MAY either be internal or public NDX. NDX in review (i.e., NDX in any other phase than lab extension) MUST be public NDX. 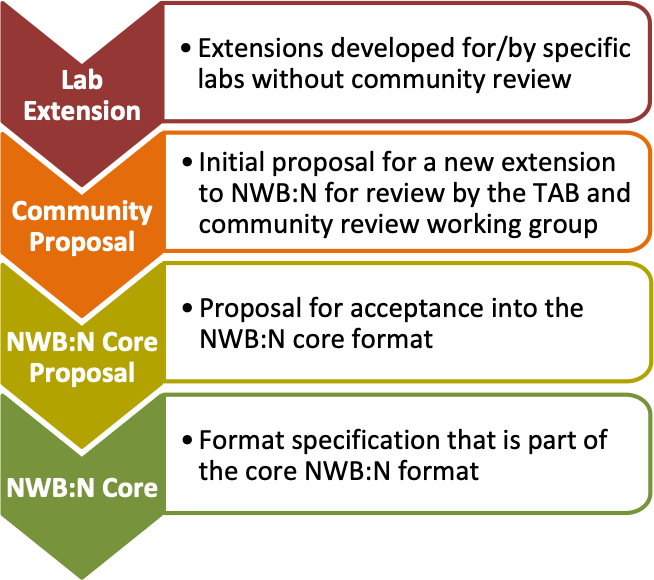 Process for creation, review and acceptance of extensions 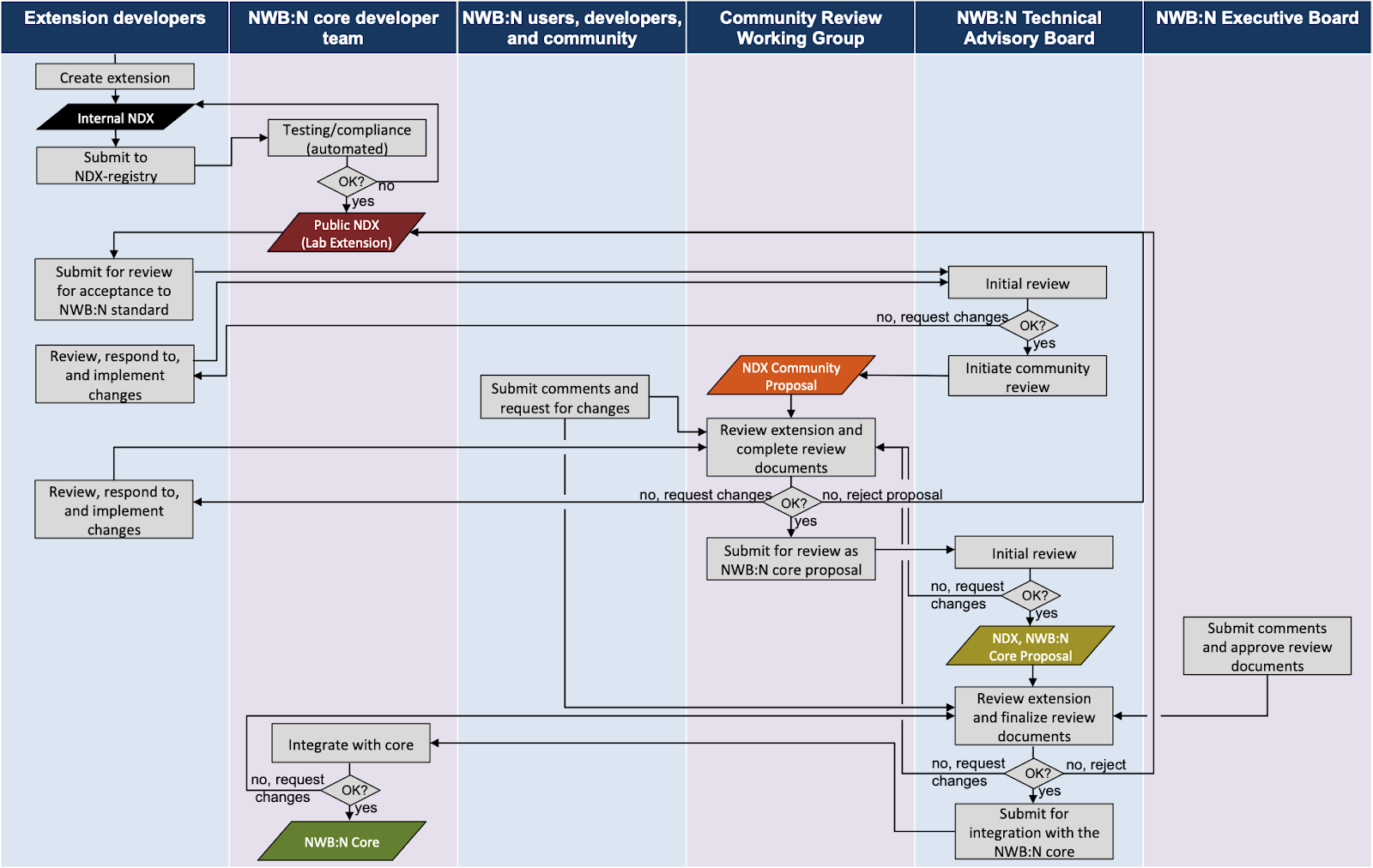 As a result of the community review phase, the working group may: 1) request changes to the NDX to address issues identified in the review, 2) reject the proposal (so that the NDX would remain a regular lab extension), or 3) submit the proposal to the TAB for acceptance.

The “NWB Core Proposal” review phase is targeted at review of the technical merits and compliance with NWB standards and metrics. Depending on the results of this review, the TAB may decide to either: 1) reject the proposal (so that the NDX would remain a regular lab extension), 2) submit a request for changes to the working group (while, depending on the changes requested, either maintaining the core proposal status or changing status again to Community Proposal), or 3) accept the proposal and request integration with the NWB core. If deemed necessary, the TAB may also submit the proposal for approval to the NWB Executive Board (EB). The NWB community (including all users, developers, members of the NWB EB, TAB, and the broader community) may submit comments and requests for changes throughout the proposal review process. If accepted, the TAB will submit a request for integration of the extension to the NWB developer team. This is typically done by creating an issue on the corresponding repositories for the NWB core specification and APIs (e.g, PyNWB, MatNWB, nwb-schema, etc.).

If the integration is successful, the extension becomes officially part of the NWB core standard. If issues are identified as part of the integration process with the core, the developer team may submit requests for changes by creating corresponding issues on the NDX-custom-record repository. The additional changes must be reviewed and approved by the TAB and the review documents updated accordingly.

Standards and metrics for review of NWB proposals

To support the formal review and evaluation of extensions to be integrated into the NWB core, we will develop a set of format review documents, questionnaires, and a rating system to enable the community and working groups to evaluate critical quality metrics of extensions in a formal and reproducible manner. This will help guide the review process and help ensure compliance of extensions with key requirements of the NWB data standard. Some relevant quality metrics and standards include:

The above list is a collection of the kinds of questions developers and users will commonly ask. The list is not exhaustive and should be expanded to cover points relevant to the specific extension proposal. For points not relevant to the specific proposal ideally indicate that they are not applicable (and why). The list is intended to provide a helpful template and guideline for reviewing extensions, rather than a strict form.

Tools and methods for review

The public review of NDX proposals for integration with the NWB core is facilitated by the NDX Catalog and the corresponding “ndx-custom-record” repository. As part of the review process, the reviewers will create and maintain review documents (in RST format) as part of a /review folder of the corresponding “ndx-custom-record” repository. Comments and requests for changes can in this way be submitted and processed via GitHub issues and pull requests on the ndx-custom-record repository. Requests for changes created as part of the review process can then be submitted to the developer team via issues on the corresponding ndx-custom repository (or email if no issue tracker is available for ndx-custom). The NDX Catalog further facilitates the review process by enabling reviewers to search and identify related extensions. For internal discussion, the review teams may also decide to use other mechanisms (e.g., Google Docs) to prepare review documents and track discussions; however, the main review documents MUST be made public via the “ndx-custom-record” repository so that they are available for public review.